Investors in nanocap Cesca Therapeutics (KOOL) have not had much of a good time: 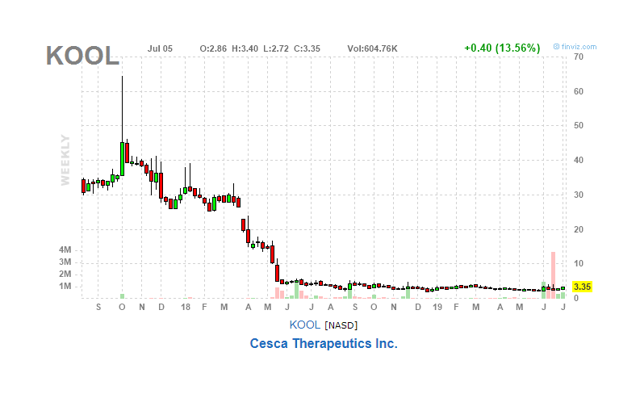 Not surprising given that revenue has gone south and the company produces large losses:

These solutions are aiming at reducing cost for what are very expensive therapies like CAR-T.

Management argues that its CAR-T Express platform, the first that is based on BACS technology, is superior to alternatives (Q4CC):

It uses our revolutionary buoyancy-activated cell sorting or BACS technology to dramatically reduce cell processing time, while providing high cell recovery, better cell viability and overall efficiency. We think this is a dramatic improvement over as their current method of ficoll-based and magnetic-beads based CAR-T cell manufacturing, and we continue to educate our target market on CAR-TXpress platform’s ability to improve t-cell isolation, purification and activation time on that point from eight hours to merely two... our CAR-T Express platform incorporating our proprietary XBACS technology permits the isolation, purification and activation of T-Cells in about one to two hours compared to six to eight hours required with magnetic field technology, reducing manufacturer variability and significantly improved cellular cover rates.

From the February 2019 IR presentation: 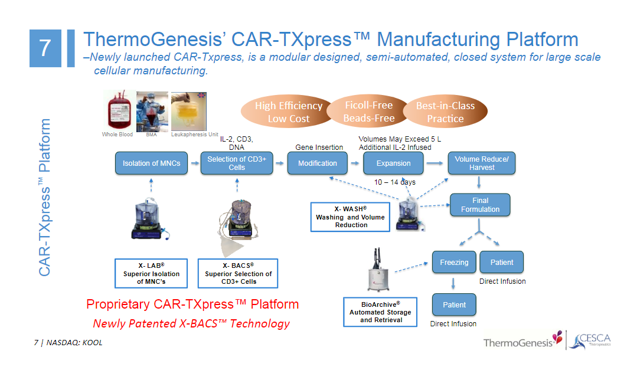 And the differences (there are intermediate slides explaining the mechanics). 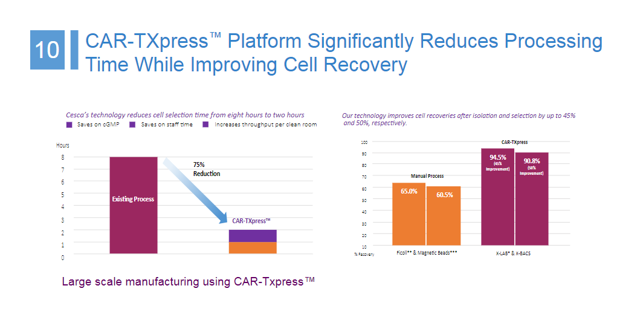 There is competition in this field, but management argued that it can cut cost up to five fold, for instance of one of the three FDA approved, which is Novartis' (NVS) Kymriah (from biopharma reporter):

But ThermoGenesis Corp, a subsidiary of Cesca Therapeutics, is looking to radically reduce the cost of CAR-T therapies through its CAR-TXpress platform, and according to chief technical officer Philip Coelho: “From what we understand about the current Kymriah manufacturing process, we believe the costs could drop by a factor of five.”​

The article describes how its CAR-TXpress platform cut costs:

Due to the automated nature of the platform, Coelho said “construction and maintenance of CAR-T manufacturing facilities are simplified,” ​by eliminating the usual requirement for laminar flow hoods and high-end cleanrooms, while minimizing labour costs.

Furthermore, product consistency is improved as “the CAR-TXpress System’s automated cartridges eliminate the inter-operator and intra-operator variability that are inevitable in manual processing steps, and which too often result in final cell yields failing to achieve the required cell dose.”​

We have to point out that we don't have independent verification, but a factor five is, well, big. Big enough to generate considerable interest, one is inclined to argue (Q1CC):

As of the end of the first quarter, there were more than 20 institutionally users that have purchased our CAR-T Express or X Series products and more than dozen are still evaluating.

In the 10-K (p4), management argues that the CAR-TXpres platform can also be used for many other CBTs (cell-based therapy). It also claims to be the market leader with its AXP in the market for automated devices for the separation and concentration of stem cell preparation for the cord blood banking market.

What isn't in doubt is that the market for CAR-TXpress is both large and rapidly growing with over 600 clinical trials already ongoing and three FDA therapies already, two of which are estimated as $1B+ markets.

What is also certain is that the costs are very high, in many cases prohibitive ($100K+ per patient). So high in fact that the EU argued in 2018 that these therapies produced "unjustifiable cost" and it declined to recommend coverage.

The situation in the US is similar with the Center for Medicare and Medicaid estimating the cost, including hospital stay can amount to more than $1M per patient.

While CAR-T therapies are seen as the next frontier in fighting cancer, technologies that manage to significantly dent these rather prohibitive cost stand to benefit a great deal. That is, a big market opportunity is definitely present for the likes of Cesca Therapeutics.

Most of the company's revenues are still generated by its AXP platform, for which there is now a second improved version, the AXP II (Q1CC):

The AXP System has been the global gold standard and the number one stem cell banking technology on the market since it was launched and we are excited to make the improved AXP II system available in increasing number of countries... utilize a system that provides the industry’s highest cell recovery rates at 97% with minimal red blood cells and granular size contamination and which have proven to be important for various clinical applications.

Again we can't independently verify this claim but revenue for AXP almost doubled, which indicates strong demand for AXP, from the IR presentation, which seems to include some independent studies backing the company's claims: 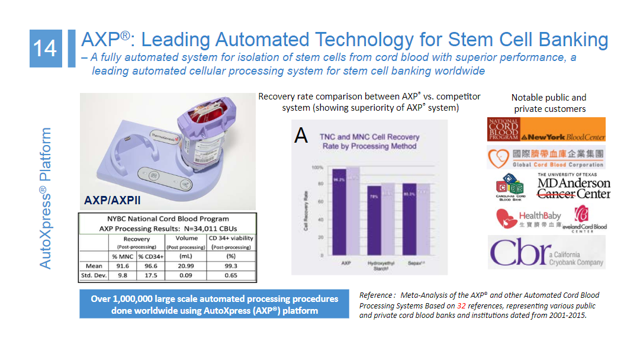 Indeed blogmedcells summarized the main findings of the study:

This is against its main rival. Given the fact that it's its main revenue earner, this is reassuring.

All three of its main products, the AXP, the CAR-TXpress platforms as well as its BioArchive product show promising acceptance with big increases in revenue (as one can see below).

Considerable revenue (see below) is also coming from its BioArchive product and these were growing at 50% in Q1, from the 10-K:

ThermoGenesis’ BioArchive ® device is the industry’s only automated; controlled-rate-freezing, liquid nitrogen freezer intended for the cryopreservation and single-cassette based storage of cord blood samples. The BioArchive device was introduced over 20 years ago and currently there are over 300 devices in operation worldwide.

From the IR presentation: 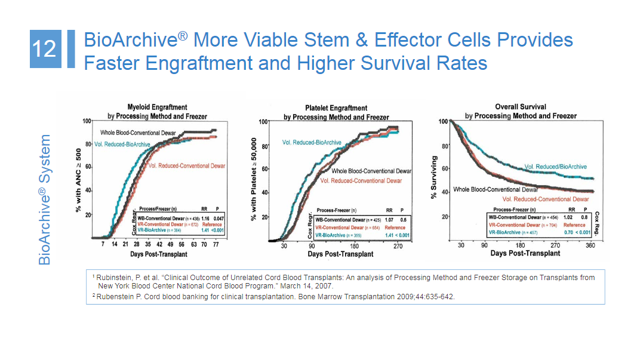 Here is where the company sold its automated storage solution: 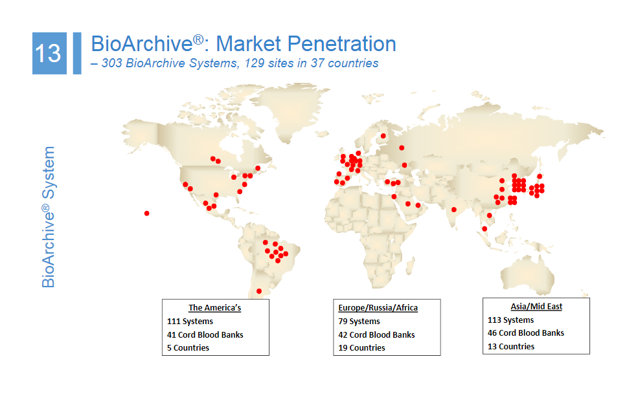 At the point-of-care, that the PXP System allows clinicians to isolate autologous stem cell at patients’ bedside within only 45 minutes... a system that provides the industry’s highest cell recovery rates at 97% with minimal red blood cells and granular size contamination

But it doesn't seem to generate any revenues yet. In April, it introduced the enhanced X-MINI CD3 Selection Kit (Q1CC):

The company will produce additional kits to enable the selection of numerous other cell types needed for various applications, further expanding the application of ThermoGenesis proprietary XBACS technology.

Asia-Pacific is the fastest-growing market in regenerative, with clinical trials in China as numerous as those in the US.

ThermoGenesis device subsidiary has signed a license agreement with IncoCell Tianjin Ltd., a wholly-owned subsidiary of China-based Boyalife Group, for CAR-T related and other cellular processing CDMO services. Pursuant to the terms of the agreement, ThermoGenesis has granted IncoCell an exclusive license to purchase and use, at a discounted purchase price, X-Series™ cellular processing research devices, consumables and kits for use in the conduct of CDMO operations in certain Asia Pacific countries. In exchange, ThermoGenesis is entitled to a percentage of IncoCell’s gross contract development revenues, including any potential upfront payments, future milestones or royalty payments.

Given that this is a worldwide market, there are significant opportunities abroad. 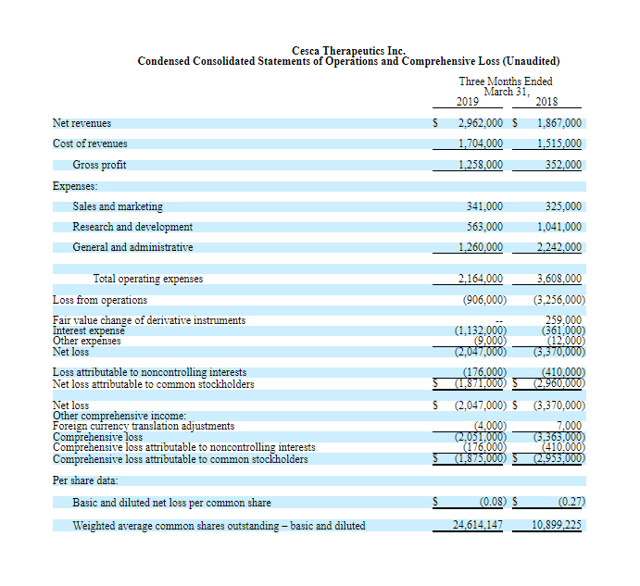 Revenues were up 53% y/y, which is rather encouraging as the cost of revenue was up way less, leading to a significant expansion in gross margins. Here is where the revenue comes from (10-Q):

Most of the growth comes from its AXP platform, which nearly doubled revenues which certainly gives indications of promising acceptance by clients.

However, its CAR-TXpress platform (which was introduced in November 2017), while not yet generating substantial revenues, is at least also generating promising acceptance with revenue rising from just $18K in Q1 last year to $307K this quarter.

In the 10-K, management argued that there are already over 600 CAR-T cell related immune-oncology clinical trials globally (and three FDA approved therapies), this is a rapidly growing market.

Its BioArchive product also experienced a considerable uptake, so while it is difficult to assess the competitive stance of these products and verify the claims with independent sources, revenue developments of its main products are pretty promising and are indicative of considerable customer acceptance.

The company has embarked on a restructuring program and margins have greatly improved as a result, and OpEx has been greatly reduced:

Cash flow is a bit better than last year and management promised (Q1CC):

That's the device segment, responsible for most of the company's revenues. The company had $2.2M in cash and equivalents at the end of Q1, down from $2.4M last quarter.

One has to divide these numbers by 10 as the company embarked on a 10-1 reverse split in order to comply with Nasdaq listing. Still, another 7M shares, that's way more than the 2.28M presently outstanding (of which insiders own 36.6%).

But even fully diluted, the company has less than 10M shares outstanding; that is, it has a market cap of just $30M or so.

There are of course significant risks involved with a small loss-making company, in no particular order:

The company has several promising technologies which have a large and growing market opportunity. While it's difficult to independently verify the claims management makes about the competitive strengths of its technologies, rapidly increasing revenue suggests it is gaining customer acceptance.

So this is firmly in the high-risk, high-reward category but based on the financial improvements of its cost-cutting program and increasing traction, one that seems promising.

Disclosure: I/we have no positions in any stocks mentioned, but may initiate a long position in KOOL over the next 72 hours. I wrote this article myself, and it expresses my own opinions. I am not receiving compensation for it (other than from Seeking Alpha). I have no business relationship with any company whose stock is mentioned in this article.