MedMen is growing rapidly but has poor cash flow. In its most recent quarter, MedMen generated $37 million of revenue (+22% QoQ; +155% YoY) but suffered an operating cash flow deficit of $59 million and spent another $45 million on acquisitions and investments in infrastructure. MedMen ended their March quarter with $22 million in cash after having spent $105 million in the first quarter of calendar 2019.

Shortly after that quarter ended, MedMen entered into a relatively complex funding agreement with Gotham Green Partners, a private equity group co-founded by Cronos CEO Mike Gorenstein (CRON). That deal strengthened ties between Cronos and MedMen, which already had a 50/50 joint venture together in MedMen Canada. The MedMen Canada joint venture appears to be dead/dormant due to Canadian retail cannabis restrictions, but Cronos still has ties with MedMen. During their most recent earnings call in May, Cronos CEO Mike Gorenstein described a relationship with MedMen as something that would "start in Canada and expand globally" and that Cronos was banking on the value of the MedMen brand and didn't feel pressure to start its own brand.

Under the original terms of the agreement, GGP agreed to purchase $250 million of convertible senior secured notes from MedMen. This debt offers GGP advantages over other creditors in the event MedMen is successful or unsuccessful: If MedMen is successful and their stock price appreciates, the convertible nature of this debt would allow GGP to realize gains beyond interest payments. Conversely, the senior secured notes would give GGP preferred status in the event MedMen became insolvent. GGP also receives stock warrants in the deal (approximately 50% warrant coverage), which provide GGP another avenue to gain if MedMen is successful.

GGP's notes were to be released to MedMen in three tranches of $100 million, $75 million, and $75 million. Each tranche has a three-year term with an interest rate of LIBOR + 6% per annum, or a bit over 8%. The first tranche has already been released, but two-thirds of Tranche 2 and all of Tranche 3 were only available if MedMen's stock price hit certain price thresholds:

When GGP's funding was announced, MedMen shares traded at $2.84/share. Since then, shares have fallen to $2.50/share, well short of the targets for GGP's second and third tranches although outperforming many of MedMen's peers.

“Both Gotham Green and Wicklow have shown continued confidence in our strategy and recognize the potential ahead,” said Adam Bierman, MedMen co-founder and CEO.

On July 10, GGP and MedMen agreed to amend this $250 million funding agreement, which includes $100 million that has already been paid out and $150 million to come.

The changes to the agreement were expansive. These changes include:

Effectively, this deal will ensure that MedMen has access to the full $250 million of the original deal regardless of its share price. It also gives MedMen $30 million of capital through an equity raise, plus another $25 million from the first third of Tranche 2, which is expected to be issued soon.

MedMen's Plans For The Funds

Funds will be used to help MedMen build out its retail footprint past its existing 37 pro forma retail stores, to focus on strategic markets like Illinois, and to continue expanding in Florida. 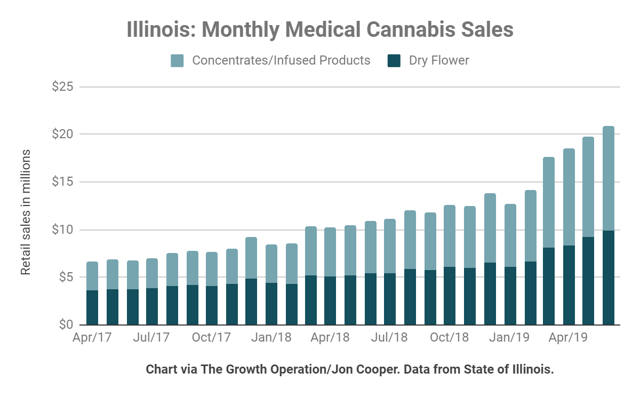 Illinois Gov. Pritzker signed a bill to legalize recreational cannabis on Jan. 1, 2020. Today, Illinois has 55 dispensary licenses issued and each company is permitted to operating five dispensaries. Under the recreational legalization, each company will receive an additional dispensary license for each license it has, and the store cap will be increased to ten dispensaries per company. Today, MedMen operates one dispensary in Illinois while Pharmacann operates four Illinois dispensaries. MedMen is in the process of acquiring Pharmacann in a $682 million deal announced in October 2018. 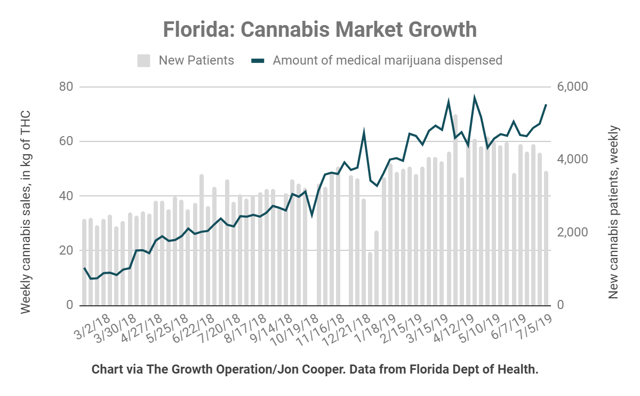 MedMen also is expanding in the Sunshine State's growing cannabis market. In Florida, each licensee has the right to open 35 medical cannabis dispensaries. MedMen purchased a Florida license-holder in June 2018 for $53 million and opened its first Florida dispensary on June 14, 2019. MedMen has seen modest sales from its first location, selling 165 grams of THC on the week of July 5, putting it in ninth of 12 Florida companies for sales/store. It's likely their sales/store will increase as they establish a customer base, since the store is only three weeks old.

Overall, MedMen and its creditors both stand to gain from this deal.

Under the agreement, MedMen gets an extra $30 million imminently and has assurance of being able to access the $125 million of Required Tranche 2 and Tranche 3 regardless of stock price movements. However, MedMen also agreed to pay a potential $18.75 million fee and has lowered the conversion price of both $100 million of existing debt and $150 million of future debt. 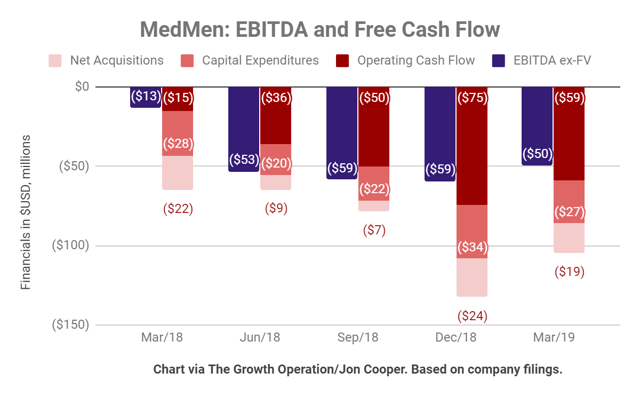 In my view, MedMen is a leveraged, risky investment due to its cash flow. Over the past four quarters, MedMen has accumulated a free cash flow deficit (including net acquisitions) of $380 million.

“We continue to march onward towards profitability.”

MedMen's new CFO Michael Kramer has been vocal about reducing MedMen's costs and moving towards profitability. Kramer has promised to cut SG&A costs by 20% from December 2018 levels and MedMen founders Bierman and Modlin have agreed to salary reductions to $50,000/year. MedMen has a strong brand name, significant ties to Cronos, and should have access to capital through this $280 million funding deal and a C$60 million at-the-market equity offering.

MedMen is saying the right things and now has access to capital that should help them continue to grow for the next several quarters. Now, they just need to deliver stronger profitability and cash flow. If they do, investors should prosper. That said, this investment looks too speculative for me, and I will remain on the sidelines until I see more signs of improving profitability.

We are the largest community of cannabis investors on Seeking Alpha. We recently launched in-depth comparisons of both Canadian LPs and U.S. multi-state operators for investors interested in this rapid growth sector.