I hope I'm not too presumptuous in claiming the title as a leading critic of Micron Technology (NASDAQ:MU) management on their lack of clarity and wisdom in piling up a staggering 151 days of inventory as of the last 10-Q. But I read the news and it has my head spinning, and I've turned very, very bullish.

SA's great writer Stephen Breezy once wrote a piece about Micron saying it was facing a purple swan event. This current combination of news items is way beyond purple, hence the title. Breezy was trying to up the ante from a "Black Swan Event."

What is a Black Swan?

A black swan is an unpredictable event that is beyond what is normally expected of a situation and has potentially severe consequences. Black swan events are characterized by their extreme rarity, their severe impact, and the practice of explaining widespread failure to predict them as simple folly in hindsight. [Source: Investopedia]

And we need to up the ante from his purple swan.

Some interesting nuance to the Huawei situation, but our only real concern is impact on end demand. Micron said that after a period of review, they determined that some product could still be shipped to Huawei, while still complying with Commerce Department restrictions.

I had assumed this would annoy President Trump and there was a risk he'd issue tweets of rage at Micron for supporting his nemesis. Hardly. Huawei proved to be a key bargaining chip in Trump's G20 appearance, and he endorsed resumption of some sales (still unclear) to Huawei. I would assume this means last quarter's $45 million inventory write-off related to Huawei might be reversed and sold with a nice margin. I assume this inventory might be something like a MCP (multi-chip package) of DRAM and/or NAND to be spliced to a processor and wouldn't qualify for the continued prohibition on military-related sales. But who knows since Micron management remains mum on most topics related to inventory.

Note, the nice timely disclosure of an important news item. The scale of this one is amazing, and Goldman estimates it may be 4-5% of the annual industry supply:

we estimate that on an industry level the impact is 12 EBs to slightly more than 12 EBs. We believe this represents 4-5% of NAND annual industry supply.

And third, the dust-up between Japan and Korea on vital chemicals to the semiconductor industry:

On Jul 1, 2019, Japan announced that it plans remove 3 types of key semi/OLED materials from its export whitelist for South Korea starting on Jul 4, 2019, which would then require South Korea to obtain Japan's approval to import these materials on case by case basis, effectively banning these materials, namely (1) Photoresist (used in memory/logic lithography) (2) Hydrogen fluoride (used in memory/logic manufacturing) and (3) Fluorinated polyimide (used in OLED/FPCB manufacturing).

If prolonged, the photoresist ban could potentially disrupt Samsung and SK Hynix's Memory and Foundry businesses

As usual, Bernstein had a great graphic: 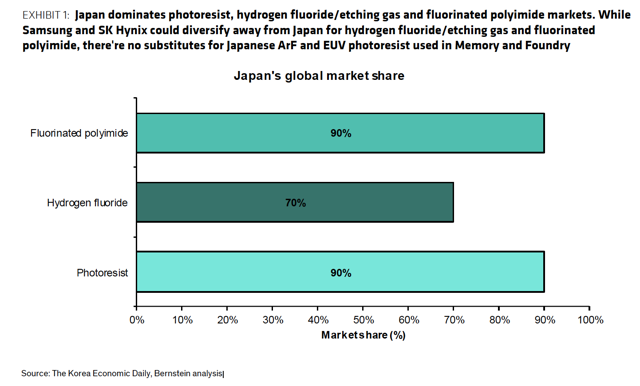 So, what does it all mean? Well, it means prices are going up, as this screenshot of last night's DRAMeXchange spot pricing shows: 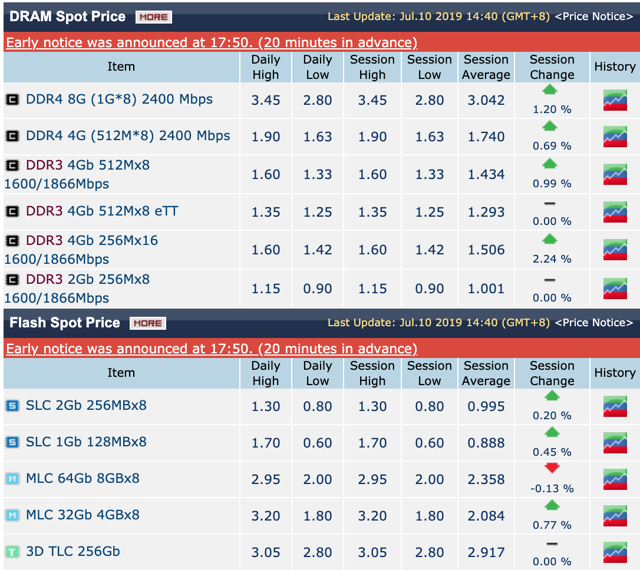 It's been an awfully long time since we've seen 7 parts with spot prices up strongly in one night.

I would imagine that memory users are scrambling to lay in supplies of product before ASPs rise. And they are probably very worried about increased shortages if the Japan/Korea dust-up continues.

Mark Newman of Bernstein has recently raised his price target from $55 to $65. He will prove conservative if this contagion of fear takes hold in Micron's customer base. Newman derives his price target by calculating a 'Long-Term Sustainable EPS' of $7.20 on which he applies a 'Long Term Average PE' of 9x. Here's his progression:

I like the idea of applying that new 'Long Term Average PE of 9x' to that 2022 number.

Conclusion: Besides moaning about a mountain of inventory (now a real plus perhaps), I have been kicking myself about purchasing 2021 $35 strike calls too early (no more kicking). I'd written shorter calls against this position which expired worthless. I'd recently written the July 19 $46 calls against this position but bought them back this morning at a small loss. Yes, I think Micron can move up that fast.

Now, in honor of Russ Fischer, who was mentor to many of us on Micron, I have bought some August $50 calls. I bought a bunch. These would be too long term and too close to the money for one of Russ's chip shots. What can I say?

I still grade management poorly on their clarity and wisdom for building their mountain on inventory. But now, this will be wind at our backs. As I said in a comment here, "Its nice to be smart, but its better to be lucky." Good luck to all Micron longs.

Electric Phred
5.47K Followers
Have made bundles in rust belt. Have made-- and lost-- bundles in high tech. Former registered rep, business degree, doing vc and private company investments, while looking for stock picks on a regular basis.
Follow

2375 Comments
To ensure this doesn’t happen in the future, please enable Javascript and cookies in your browser.
Is this happening to you frequently? Please report it on our feedback forum.
If you have an ad-blocker enabled you may be blocked from proceeding. Please disable your ad-blocker and refresh.