A month ago, I warned readers to be careful with bets against Innovative Industrial Properties (NYSE:IIPR) stock. While the stock certainly looks like a hype-driven bubble at first glance, there's actually a lot working in the company's favor. I concluded that article by saying that:

I know IIPR stock probably looks like a great short. A huge run in the stock price attached to a marijuana business seems like a slam dunk. But bears have been on the wrong end of it so far, and there's no sign that it will let up soon. The company's business model remains profoundly lucrative - at least for the time being. And with a stunning 26% of the float shorted, there's plenty of fuel available to keep the short squeeze running awhile longer.

Since then, IIPR stock shot up another $20/share, and hit new all-time highs in Thursday's trading action: 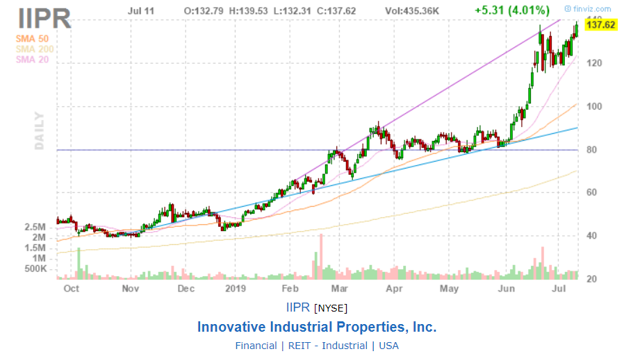 Technically, the chart looked set for a decisive break to new all-time highs toward the $150 level. However, that rally is set to take a slight pause.

After the close Thursday, Innovative Industrial announced that it plans to raise more capital. It intends to sell at least 1.25 million more shares of IIPR stock to the public, with an underwriter option for more.

Assuming they sell the stated 1.25 million shares at $120 each, this will bring in $150 million of new funds for the REIT to put to work. This figure should make bulls happy and scare anyone betting against IIPR stock.

Why's that? Because Innovative Industrial can potentially get a whole lot of bang for that much buck. Let's look at their last two purchases. In June, they bought a 45,000 square foot Michigan property for $6.9 million while agreeing to reimburse up to $3.1 million in tenant costs to get the facility up and running. So that's something like $10 million to get a new leasable unit producing rent.

Earlier this month, IIPR picked up another facility in Michigan. This one is a much larger 145,000 square foot facility. It paid $4.8 million for it, while agreeing to provide up to $15 million in tenant reimbursements. So, call it $20 million for this site.

This is back of the napkin math, and obviously a lot could change. But the point should be simple. By diluting the share count by just 10% or so, IIPR can add nearly 50% more real estate to its empire. Also remember that IIPR is putting capital to work right out of the gate earning close to 15% rent spreads. Meanwhile, even after the recent dividend hike, IIPR stock only yields 1.8%. So they are getting something like an immediate 13% annual spread on the new $150 million of capital that they are raising.

A Virtuous Cycle ... For Now

This is simply a dreadful short position for the time being. Since my last article, IIPR stock's short interest actually ticked up a percent, from 26% of the float to 27% now. Even with the share price continuing to rise, the bears haven't backed down. Unfortunately, their short position is still premature - and the secondary won't change that fact.

As long as IIPR can keep putting money to work at extremely elevated rent spreads, any capital raises are great news for shareholders. The company can raise tremendous amounts of capital at minimal dilution to existing shareholders. In theory, this capital raise alone will allow the company to grow its revenues and FFO by 40% or so over the next year or so while adding only modestly to the company's overall float. Expect another big dividend hike once they put this money to work as well.

For comparison's sake, think back to the IPO. The company sold 3.3 million shares at $20 each, raising $67 million. That'd only buy four or so average properties for IIPR in return for 3.3 million shares. Now, for 1.25 million new shares, they can buy around 10 new properties. That's a massive improvement. As long as they can keep putting capital to work at these huge leasing spreads, the share price will keep going up, they'll issue more stock, raise the dividend, and keep repeating the cycle.

Of course, this will eventually end. Capitalism doesn't tend to permit high profit margins to last indefinitely. Competition will come along. Already, some other firms are set to start trying to fund medicinal marijuana operations.

However, the big catalyst that would probably break IIPR's virtuous cycle is at least a year off. If the U.S. federal government legalizes marijuana, it would allow banks and other more risk-averse sources of capital to start flooding the industry with funding. This would cause lease spreads to collapse, and IIPR's ability to grow with it. But it's hard to see how legalization could possibly occur before the 2020 presidential election.

Finally, I'd note relative strength in the marijuana stocks. The industry as a whole has been on its back foot recently. Canopy (CGC) and Constellation (STZ) are seemingly in a feud regarding Canopy's strategy going forward. Bloomberg is out warning this week about ongoing losses and writedowns on the way for the Canadian marijuana players. Meanwhile, CannTrust (CTST) shares full-on collapsed following Canadian regulators seizing some of that company's inventory. Yet IIPR stock continues trading higher despite all the troubles elsewhere:

Even putting fundamentals aside, the technicals say IIPR stock is a terrible short as well. When a sector rolls over, as marijuana has done over the past few months, it's a telling sign when one stock bucks the trend and keeps going up. Pot stocks may well be (have been?) a bubble. But that doesn't mean you should short the strongest one while it still growing rapidly and can raise money on most favorable terms. Innovative Industrial Properties will eventually be a great short position. But you could go bust trying to bet against it too soon.

If you enjoyed this, consider Ian's Insider Corner to enjoy access to all my trades and reports on new stocks that I buy. Membership also includes an active chat room, weekly updates, and my responses to your questions.