By now, just about everyone has heard about AbbVie’s (NYSE:ABBV) bid to acquire Allergan (NYSE:AGN). If you haven’t already, I encourage you to view the investor presentation. For a deeper look, also consider reading my previous article, Merger Math: Allergan + AbbVie. I also recommend reading Dividend Sensei’s 3 Things Investors Need to Know About AbbVie’s Future, Chuck Carnevale’s AbbVie Has it All, and David Zanoni’s AbbVie SWOT Analysis, as well as the associated comment threads for reasons why this is a compelling investment. It’s not all sunshine and roses, however. There are very real risks due to leverage, performance of the management team, and regulatory approvals (of the merger and of drugs in the pipeline), as well as recent chatter about limiting drug prices. But, if you’ve decided that these companies are worth investing in, read on.

Surprisingly, although the majority of recent articles tout the benefits of the proposed merger, the predominant conclusion is to “Buy ABBV.” But, if you are bullish about the prospects of the proposed merger, you should be taking the other side of the trade and buying AGN in order to take advantage of the arbitrage. There is no reason to “Buy ABBV” now unless you believe the merger will fail and ABBV will regain a higher multiple. Although this is certainly a possibility, thus far there has been no significant opposition to the deal. In fact, ABBV shareholders don’t even get a say in whether or not the deal goes through, as it is solely dependent on AGN shareholder and regulatory approval. If you support the deal, you should be buying AGN to vote in favor of the merger. As an unlikely but potential upside, it is possible that a higher offer is made to buy AGN, either by a competing firm or by ABBV to sweeten the deal and secure shareholder approval.

For your convenience, I have created a simple Excel worksheet to help you calculate the arbitrage possible: ABBV_AGN_Arbitrage.xlsx

Despite being announced three weeks ago, the arbitrage spread between ABBV and AGN has actually been slightly increasing, suggesting continued uncertainty as to whether or not the deal will be completed. 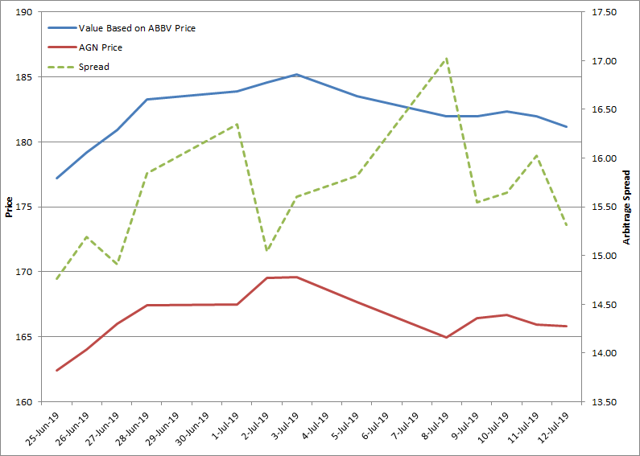 For insurance in the event of a merger failure, you could consider buying put options on AGN. The ask price for puts on the November 15, 2019 $165 strike is currently $7.75 for maximum loss of 4.95% over the next 4 months based on the current AGN price of $165.85. If you manage to collect two dividends before exercising the put, the maximum loss drops to 4.1%. In the event that prices stay the same or increase, the put could expire worthless, increasing your cost basis to $61.55 per share of ABBV – not as compelling, but still good value with much lower risk. You could also consider longer duration options, but it is likely that there will be significantly more clarity as to whether the merger will succeed by the time November rolls around. For precedent, look at the Bristol-Myers (BMY)-Celgene (CELG) merger, which was announced in January. Although some opposition cropped up in February and March, the merger was approved by shareholders in April and the arbitrage has mostly evaporated. A similar timeline could play out here, but AGN has yet to set a date for shareholders to vote on the merger.

In the event that the merger is approved by shareholders but delayed by regulatory approval or a need to divest portions of the business, the advantage in holding AGN shares would slowly dwindle due to the difference in dividend yields. However, it would require a delay of over 3 years for buyers of AGN to come out worse due to the huge arbitrage currently available.

To summarize, if you think the ABBV-AGN merger is likely to succeed, you should be positioning in AGN to take advantage of the merger arbitrage. Downside risk can be substantially limited through the use of options, and if the merger is completed as proposed, you could secure an extremely attractive cost basis in ABBV shares.

I am the curator of the Dividend Champions list, a monthly publication of companies with a history of consistently increasing their dividends. My primary investing focus is in deep value and dividend paying stocks, but I am constantly exploring alternative strategies. I have a Ph.D in Chemistry from Rice University and have earned the CFA Institute Investment Foundations certificate. I am a contributor to The Dividend Kings marketplace service.

Disclosure: I am/we are long ABBV. I wrote this article myself, and it expresses my own opinions. I am not receiving compensation for it (other than from Seeking Alpha). I have no business relationship with any company whose stock is mentioned in this article.

Additional disclosure: My ABBV position predates the merger announcement, and I may initiate a long position in AGN over the next 72 hours.