Bloomberg recently put out an article saying that the government has gotten cold feet about spearheading administrative reform for Fannie Mae and Freddie Mac, and may wait until after the elections.

HousingWire said that Bloomberg said White House's Judd Deere said the government will "continue to work together on this presidential priority and anything to suggest otherwise is false."

Fannie Mae (OTCQB:FNMA) and Freddie Mac (OTCQB:FMCC) are two of the most profitable companies per employee in the world, and have been in conservatorship since 2008. Since the conservatorship has begun, the government has taken all of the profits the companies have made for itself, and shareholders have furiously filed multiple lawsuits in multiple courts around the nation. Earlier this year, team Trump took over the Federal Housing Finance Agency (FHFA), and Trump issued an order to produce a plan to get Fannie Mae and Freddie Mac out of conservatorship. In response to public criticism from anonymous sources quoted in mainstream media, White House spokesman Judd Deere pointed out that everyone is still working together to get this done:

When Republicans controlled the White House, the Senate, and Congress, they were unable to pass housing reform legislation. If you review what Trump asked for when he asked for this plan to be created, he's basically looking for what can the administration do now that will also help facilitate legislative action, if there will be any. Long story short, the two companies cannot exit conservatorship without being declared adequately capitalized. There are a few parts there:

Capital requirements will be decided in such a way that it is possible for Fannie and Freddie to be able to raise the capital via an equity offering as well as retained earnings. The market valuation of the equity at IPO has to exceed the amount of money the companies are expected to raise. Depending on the market valuation of the equity at the time the companies raise capital, commons may stand to make more money than preferred shareholders, subject to favorable recapitalization mechanics. That said, preferred shareholders have no incentive to do anything for less than par, which provides great security and over 100% upside. I have over 100% of my net worth in preferred stock, and I expect no less than par value. I expect to convert to common as part of the capital raise process in order to help get Fannie and Freddie out of conservatorship.

The Housing and Economic Recovery Act of 2008 (HERA) is the body of law that established the FHFA. The new and current director of FHFA, Mark Calabria, has previously written that the conservatorships violate HERA: 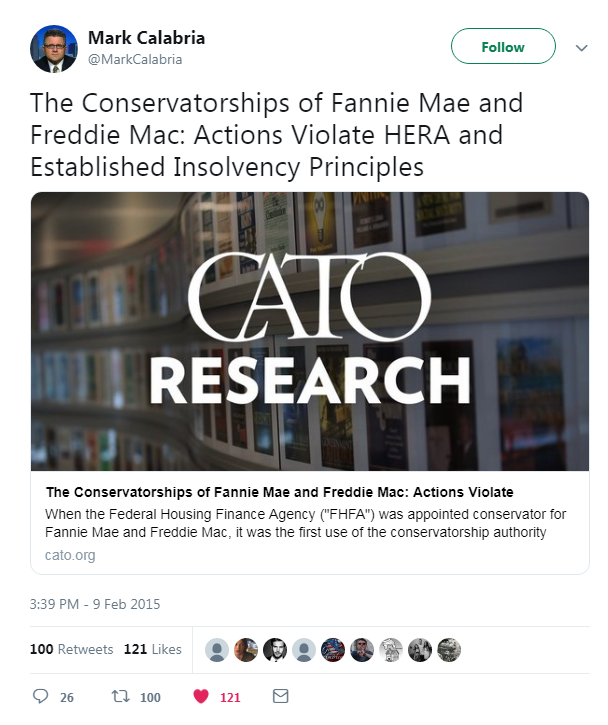 Mark Calabria writes that the net worth sweep violates the law:

To date, Mark Calabria hasn't done anything about it. That doesn't mean he won't. Mark Calabria has previously talked about resolving the net worth sweep so that the companies can retain capital, as well as looking at ways to raise new capital from the private markets.

More recently, now he has written that nothing is likely to happen for the next year and a half:

Unnamed sources have confirmed to me that Austin Weinstein's source of most of his information related to housing reform comes from Michael Bright of the Structured Finance Association. Regardless of who exactly these people who are familiar with the matter are, they're not getting the story right. HousingWire reported that these suggestions by "people familiar with the matter" are false:

The Securities Industry and Financial Markets Association (SIFMA) has come out with a report saying that the administration should take no action and instead wait for legislation. They argue that somehow an implicit guarantee plus the SPSPA backing is less than the same implicit guarantee plus the SPSPA backing plus one hundred billion dollars or more of private capital.

According to Investors Unite, "the mortgage market has never had, and does not currently have, an unlimited securities-level guarantee for the GSEs. It makes no sense to suggest one is necessary now, as there has emerged a wide and increasing public consensus that private capital should be raised to protect taxpayers." Investors Unite is an investor rights advocacy firm led by Tim Pagliara, who owns Fannie Mae and Freddie Mac common and preferred shares.

Put another way, SIFMA argues that somehow keeping Fannie and Freddie in conservatorship protects taxpayers better than $100 billion+ of private capital. I don't understand the reasoning there. It's not as if the government is incentivized to do the accounting run-around re-hash of 2008 again now, especially when they already are taking all of their earnings via the net worth sweep. The whole point was to retroactively justify the imposition of conservatorship to save the banks in the first place.

Anyway, if taken seriously, the SIFMA report would seem to suggest that without an explicit guarantee, markets would be roiled - but we don't even have that now, and markets aren't roiled. The logic employed in that narrative is designed around the reclassification of agency mortgage-backed securities so that banks can account for them differently post conservatorship. Fannie Mae and Freddie Mac are members of SIFMA. It's almost like the companies themselves are supporting a never-ending conservatorship.

The government isn't producing documents again, this time in Lamberth's court. In 2014, shareholders' hopes and dreams were roiled when Lamberth originally dismissed their complaints. It was that time when I started getting involved in Fannie Mae and Freddie Mac. That court case has bounced around, and now is back on Lamberth's desk. Treasury currently refuses to participate in the discovery process.

The real leader case here is the Collins en banc. There, there are two major updates:

There's a lot of confusion out there right now, but this isn't rocket science. Fannie and Freddie have been around for dozens of years, and have done a great job supporting equal opportunity mortgage availability nationwide. Since their placement into conservatorship and their profits confiscated by the government, the companies have raised their guarantee fees, which has made it possible for them to raise enough money to exit conservatorship even though capital requirements are likely being raised since they were originally placed into conservatorship. Everyone who is demanding legislative reform really just wants a securities-level unlimited explicit guarantee. If I were a big bank, that would be great for accounting purposes, but it serves no real practical purpose.

Follow Glen Bradford and get email alerts
+
Add a comment
Disagree with this article? Submit your own.
To report a factual error in this article, click here.
Your feedback matters to us!