Five Prime Therapeutics (NASDAQ:FPRX) is a small company that has been around for a number of years, and its 5-year chart looks pretty bad for those who invested it in the 2017s. Indeed, the stock is probably trading at all-time lows these days. However, its focus on targeting fibroblast growth factor receptors is a relatively novel approach against cancers, where FGFR is often implicated. The FGFR is a subfamily of Tyrosine Kinase Receptors (TKR), and is an approach that overcomes the problems with targeting TKRs alone:

Most of the TKR share intracellular signaling pathways; therefore, cancer cells tend to overcome the inhibition of one tyrosine kinase receptor by activating another. The future of TKI (Tyrosine Kinase Inhibitor) therapy will potentially come from multi-targeted TKIs that target different TKR simultaneously. It is crucial to understand the interaction of the FGF-FGFR axis with other known driver TKRs. Based on this, it is possible to develop therapeutic strategies targeting multiple connected TKRs at once. One correct step in this direction is the reassessment of multi target inhibitors considering the FGFR status of the tumor. Another opportunity arises from assessing the use of FGFR TKI on patients harboring FGFR alterations.

As we see here, targeting the FGF-FGFR axis allows targeting multiple TKRs at once, overcoming the ability of cancer cells in the cross-utilization of shared intracellular signalling of TKRs. This is interesting science; now we have to see how FPRX goes about developing Bemarituzumab, an antibody that inhibits fibroblast growth factor receptor 2b, or FGFR2b, and recruits tumor-killing NK cells into the tumor microenvironment.

According to the company, Bemarituzumab (bema) is:

Bemarituzumab, targeting gastric and gastroesophageal junction cancer, has an ongoing Phase 3 trial. Phase 3 futility analysis is due on June 30, 2020.

The company has another ongoing phase 2 trial for Cabiralizumab + Opdivo in pancreatic cancer. Phase 2 trial data is due on December 15, 2020. 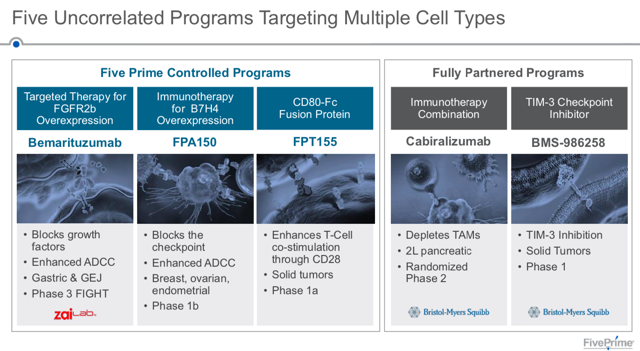 Five Prime Therapeutics does not have a phase 2 trial supporting this phase 3. Instead, it has a phase 1 trial. Data from this trial was presented in a poster entitled “Phase 1 Results from the Phase 1/3 FIGHT Study Evaluating Bemarituzumab and mFOLFOX6 in Advanced Gastric/GEJ Cancer” at the ASCO Gastrointestinal Cancer Symposium in San Francisco.

The Phase 1 portion of the study did not select patients based on FGFR2B status; however, at the time of the ASCO publication, 2 patients with gastric/esophageal cancer were confirmed to be FGFR2 positive, with 1 achieving a PR and the other demonstrating a complete metabolic response. The data from the trial is as follows.

In 21 treated patients with late-line GC/GEJ and high FGFR2b overexpression:

Discussion: A 19% ORR in this heavily pre-treated patient population is very decent-looking data. The drug was also very safe, with MTD not having been reached, although phase 3 dosage was fixed at 15mg/kg every 2 weeks based on the half-life. The safety profile is good for combination therapy with chemo drugs; here, the 10% patients with FGFR2 overexpression can benefit from the drug, while the rest can benefit from chemo.

Phase 3 trial has OS as primary endpoint, and it will select only those patients who have the FGFR2B receptor overexpressed in their tumors. This will be a conclusive trial, and early data does promise a good outcome from it. The first patient has already been dosed in this 550-patient trial.

And here’s a quick snapshot of fund ownership: 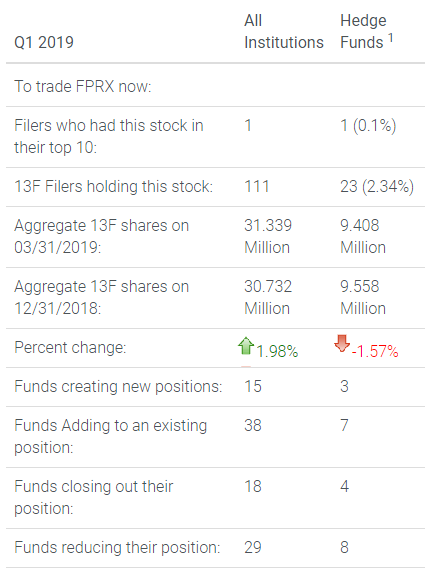 Gastric cancer (GC)/gastroesophageal junction (GEJ) cancer is the 3rd most common cause of cancer death globally. Current therapies include surgery, radiotherapy, chemotherapy, and targeted therapies like Herceptin, which only works if the corresponding receptor is present in the tumor - i.e., it is HER2-positive; this constitutes about 9-38% of patients. FGFR2 amplification/ FGFR2b overexpression is associated with difficult-to-treat disease. This is present in approximately 5-10% of patients with GC/GEJ. This is the target population of Bemarituzumab.

Another successful therapeutic target in a subgroup of patients with GEA includes single-agent anti-PD-1 therapy in later-line settings. Microsatellite instability (MSI-High) occurs in approximately 2–3% of GC, and pembrolizumab has recently received regulatory approval for previously treated patients with any MSI-High solid tumor, including GC [14]. Additionally PD-L1 expression, as defined by combined positivity score occurs in approximately 50% of GEA patients at the cut-off of combined positivity score ≥1. Recently, pembrolizumab monotherapy has demonstrated activity and gained conditionally approval for these patients in the third-line setting or higher.

There are a number of pan-FGFR inhibitors in various stages of trials. A list is available here, but from 2017.

Bemarituzumab has no competition in its specific target population. If successful, it should become the standard of care in this population. There are approximately 3000 patients in the US every year who will be eligible for this treatment. Assume an equal number in the EU, and much larger figures in Asia (where FPRX collaborates with Zai Labs), and we are looking at a drug that can make $1 billion in potential sales, assuming a price tag of $150,000 per patient per year.

That the drug didn’t see a phase 2 trial presents a distinct risk at this stage. However, decent data from the phase 1 trial is some consolation.

The company has enough cash - and strong collaboration partners - to see it through the trial. However, it will have to pay royalty fees. For the collaboration with Zai Labs, they have a peculiar arrangement where each party has to pay the other royalty fees in different territories. FPRX has another royalty fee arrangement with BioWa. With Bristol Myers-Squibb, it has a similar royalty agreement; however, the company says this might have expired. The same goes for another royalty agreement it has with GlaxoSmithKline.

FPRX is trading at 52-week lows. Given the data we presented, we think it is suitable for a small investment at this stage.