Insight's Bargain Acquisition of PCM is a Massive Win

On June 24, 2019, Insight Enterprises (NASDAQ:NSIT) announced a $35 per share cash acquisition of PCM, Inc. (PCMI). The deal is expected to close by November 2019. PCM is a multi-vendor technology hardware reseller and software vendor, which will complement Insights' cloud, data-center and hardware reseller solutions for corporations and governments. The total cost for the PCM common stock will be about $474 million and the total enterprise value acquisition cost will be $581 million (net of debt and cash acquired). PCM will add over $2.2 billion in sales to Insight's $7.3 billion expected 2019 sales. NSIT says that the expected annual synergies will be over $70 million by 2021, more than half of which will occur by 2020 year-end. In addition, NSIT says the acquisition will be accretive by $0.70 per share for 2020 EPS. 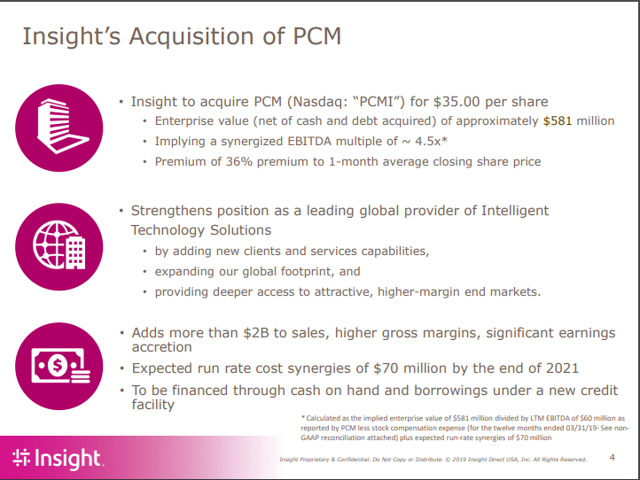 Combined Model. I decided to look into this deal further and modeled out the combined company based on the stated synergies and expected gains. What I found is that the company is expected to sell for just 6x EV/Adjusted EBITDA by 2020. Incredibly I found that the combined free cash flow ("FCF") of the two companies will pay for 3/4ths of the acquisition by 2020 year-end. The FCF should easily reach over $444 million by the end of 2020, up from $342 million at NSIT estimated for 2019. Moreover, the deal involves no shareholder dilution to existing NSIT shareholders since the acquisition is paid for by additional debt taken on by NSIT.

My model is simple. I estimate the earnings, adjusted EBITDA and FCF for both NSIT and PCM and then add in the synergies, less the additional interest costs, and determine the net result. Lastly, I compare the valuation metrics of the combined company with the valuation metrics of its peers to determine the estimated true value of NSIT. I found that NSIT is worth at least 62% more than the present price (July 16, 2019).

Pre-merger models. The first thing to note about NSIT's present capitalization is that it does not have much net debt and that cash more or less covers that debt: 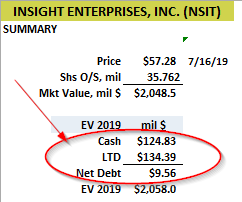 Moreover, when it takes on the acquisition of PCM, its net debt will be just 35% of the market cap by 2019 year-end, if the stock does not move higher. However, since the combined company's free cash flow is so strong, net debt will be significantly reduced by 2020 year-end, when only half of the synergies will be expected to have kicked in. This can be seen in the following table: 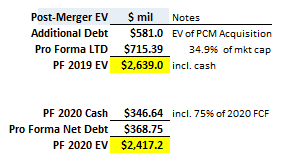 I will use these EV figures to value the company later in the article.

Next, I modeled out both companies earnings, EBITDA and FCF as if the merger would not happen. Here are the results of those models: 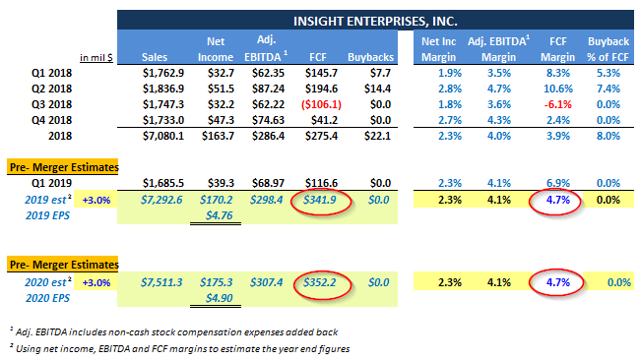 As you can see the model assumes a 3% growth rate in sales for 2019 and 2020 and uses the median margins for the past 5 quarters to estimate the net income and adjusted EBITDA. However, the FCF figures are circled because I used a two-method approach to estimating free cash flow. First, look at the following breakdown of how FCF was produced by NSIT during 2018: 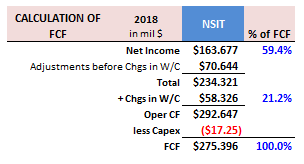 This shows that net income is 59.4% of the total FCF calculation and that changes in working capital work out to 21% of the total FCF numbers. These numbers are used in the 2 methods for estimating FCF in the table below: 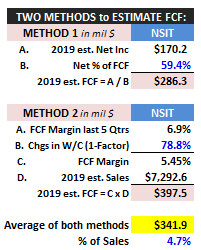 The first method uses net income as a % of FCF to estimate 2019 FCF. This works because net income has already been estimated to be 2.3% of sales, based on the last 5 quarters in the first table above for NSIT. The second method tries to take into account the variability of changes in working capital since the latter tends to highly influence the final estimated FCF figures. Changes in working capital are only 21.2% of FCF in 2018, so we multiply 1-21.2% to the FCF margin of the past 5 quarters to discount an estimated FCF margin. In effect, it reduces the FCF by 21.2% from the average of the past 5 quarters. Then we average both methods to estimate the final $ amount of FCF for 2019. That works out to be 4.7% of sales. This figure is then used to estimate 2020 FCF.

Note that NSIT Q3 2018 had a negative free cash flow figure, which I believe is an anomaly. Without that, FCF would have been higher in 2018 and would likely have resulted in a figure greater than EBITDA. Note that our estimates for 2019 FCF are also higher than the EBITDA estimate, even though EBITDA adds back interest and taxes which are not added back in FCF. The main reason for this is that changes in working capital, which account for 21.2% of total FCF are generally positive for NSIT. In effect, it is able to pay its suppliers much later than it receives money on its receivables, so its working capital tends to be positive and thus FCF is higher than EBITDA. So without the merger, I believe the 2020 FCF will be at least $342 million.

Here is the model for PCM, Inc., calculated on a similar basis: 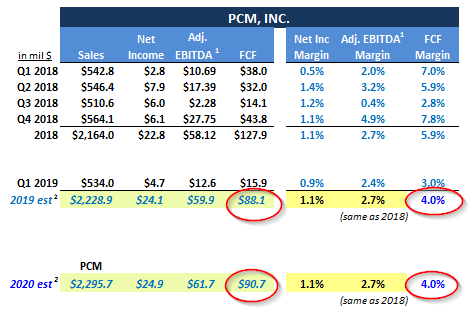 This model uses the same growth rate and also derives the net income from the median of the past 5 quarters and adjusted median as the same margin as in 2018. The two methods for calculating FCF are shown in the tables below: 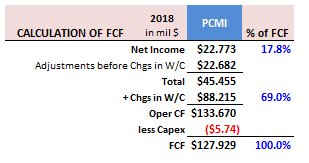 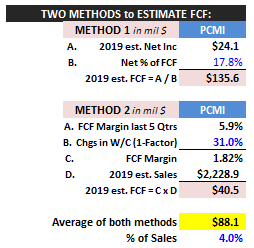 Source: Hake estimates and calculations taken from 2018 10-K of PCMI

Putting Them Together. Below is a simplified table which shows the two separate models combined together: 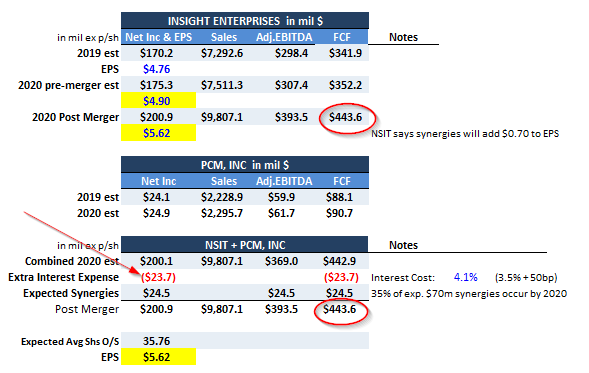 Note that this is a simplified model and shows that there are extra interest charges calculated at the existing rate of 3.5% that NSIT has been paying plus an extra 0.50% (50 basis points). In addition, I only used 35% of the potential $70 million in expected synergies that should accrue by 2021, even though the company said that up to half of them would occur within 12 to 18 months (see slide presentation above).

The net result is the combined company will achieve about $444 million in free cash flow, by 2020, which is 76% of the expected $581 million EV cost of the acquisition of PCM. Note also that the expected EPS is $5.62 by 2020, which is $0.72 higher than the $4.90 EPS rate for NSIT that I estimated in the solo model for NSIT in the prior tables. This is important since it coincides with the expected $0.70 per share uplift in EPS that NSIT estimated to occur by 2020 - see slide presentation below: 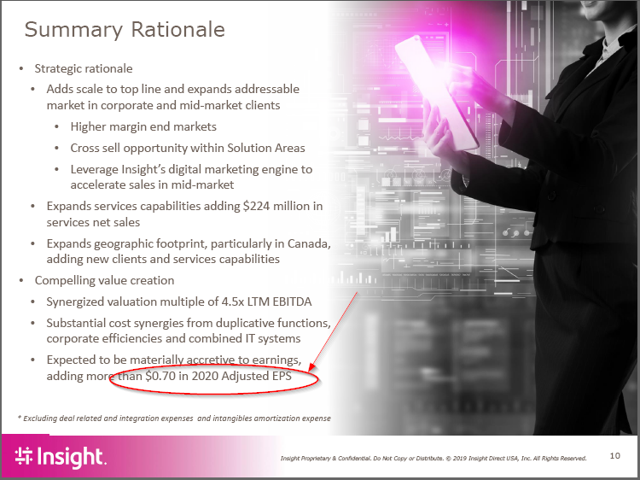 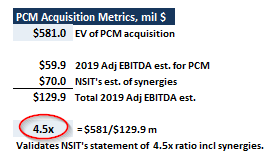 NSIT Is Worth At Least 62% More Than Today's Price

Valuation Metrics. Based on our analysis, here are the estimated value ratios for NSIT, post-acquisition:

Note that NSIT's FCF yield ratio is extremely high. This is the essence of why NSIT's stock will be so valuable. NSIT's high FCF margins allow the company to not only buy PCM, Inc. and have it paid off by the end of 2020 but also allow it room to buy back stock at the same time. A comparison with a few of NSIT's peers shows that the stock is extremely inexpensive:

This table shows that in every value metric NSIT is much cheaper than its peers. Using the median for each category we can estimate NSIT's value:

This shows that the true value of the stock is at least 62% higher at $92.51 per share. Note I discounted the valuation by 50% because it seemed that this valuation should probably be reduced by its relatively small size and the fact and that NSIT's business lines are not comparable to some its peers. For example, software and cloud-based services represent just 13% of NSIT's Q1 2019 revenue, whereas they account for 37.3% at Hewlett Packard:

Therefore given the differences in business lines and the large discrepancies in market caps of most of NSIT's peers, I applied a 50% discount to the NSIT true value calculation. Over time as NSIT grows that discount will narrow.

Catalysts. I believe a major catalyst that will push the stock to its target value is NSIT's free cash flow generation. Over the next year or so after the acquisition, it is likely that NSIT will focus on debt reduction with its FCF. There is also room for NSIT to potentially engage in share buybacks. NSIT has done this in the past. In Q1 and Q2 2018, NSIT bought back over $22 million of its stock using about 13% of its free cash flow. I suspect as 2020 year-end approaches the company will engage in further buybacks. This will increase the EPS further and help push up the stock price.

I have shown that the PCM, Inc. acquisition by NSIT is extremely earnings and FCF accretive. In addition, the stock will likely rise closer to its true value at least 62% higher at $92.51 per share over the next year or so, as the acquisition of PCM is integrated into NSIT. In short, this acquisition is a massive win for NSIT.

Mark R. Hake, CFA, has been a consultant to various companies, including hedge funds, software, and technology companies. Prior to that, Mr. Hake was President of Hake Investment Research and Hake Capital Management. He has been featured in Barron’s, CNBC, Bloomberg, and other news organizations as a contrarian investor and deep value specialist.