Although Jetlines continues to burn cash and has yet to fly its first plane, I believe the airline's pivot towards technology will make it a formidable player in the industry, and this will help drive profitability when Jetlines launches in late 2019.

Two major expenses in any airline are its fuel costs and salaries/benefits. Aircraft fuel is a necessary expense and one way to mitigate this is to fly fuel-efficient airplanes. With salaries and benefits, too high of a salary for its employees can erode an airline's profit margins. This is one major reason why Westjet was very much against its employees unionizing.

For Jetlines, in a bid to lower its cost structure, it is leaning heavily on the latest technology to help drive costs down. Below is a slide from its investor presentation: 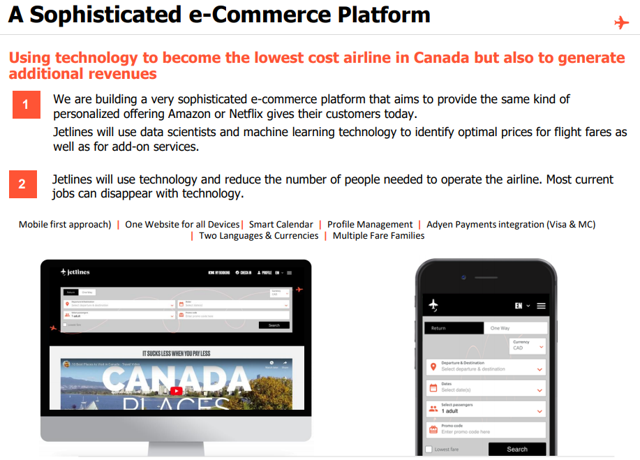 It's investing heavily in its e-commerce platform and already it has confirmed the following systems are ready for launch:

If all these systems can work as Jetlines claims, this is a very powerful piece of technology that can potentially disrupt the industry. Amazon (AMZN) and Netflix (NFLX) disrupted its respective industries and indirectly took down some heavyweight giants (remember Blockbuster).

Jetlines has already claimed it wants to lower the price of airfares enough that it can attract travelers that would typically not fly. By comparing itself to Amazon, its pricing strategy will be to offer its fares at steep discounts and to make up the loss through volume sales.

To maintain its ultra-low cost structure, Jetlines will be using its newly developed technology in place of traditional workers that would typically be employed for booking tickets or for administration.

Jetlines and its New Owners: Smartlynx/InHarv

Jetlines is the first airline to be allowed up to 49% of foreign voting interest. In the several months, this upstart airline has already attracted investments from a Korean private equity firm, InHarv and an European airline operator, Smartlynx.

InHarv, a Korean private equity firm is providing up to $14 million in financing for the company:

Besides a financing agreement with Smartlynx, Jetlines also inked a new leasing agreement for 2 Airbus aircraft. The leasing will start for a period of 5 months starting on November 1, 2019.

A quick background of Smartlynx, this airline operator is based out of Riga, Latvia, and is primarily in the full-service ACMI business (Aircraft - Crew - Maintenance - Insurance). Its business deal with Jetlines is its first foray into North America. Smartlynx has been in the airline business in Europe since 1992, so it knows a thing or two about operating an airline business. With the knowledge that Smartlynx has in the airline industry, it will not invest in a money losing venture, so, in my opinion, an investment in Jetlines is a sign that Smartlynx at least approves of Jetlines strategy.

Jetlines is Committed to its Timeline of Flying in Dec. 2019

Jetlines has been around for a while now and has drawn some criticism for being around so long but has yet to fly one plane. Back in 2014, there were plans to launch that year but 2014 came and went. 2019 seems a lot different.

With financing secure, Jetlines is going fast to get its operations up and running before the end of this year:

Airlines would not generally sign these agreements if there was no plan to launch its first flight. So, the likelihood is high that Jetlines will be launching its first flight in Dec. 2019.

Risk: No Guarantees of Profit

There has not been a strong record of success for airline operators in Canada. The most recent casualty was WOW Air when it ceased operations in March 2019. Running an airline is a narrow margin business especially for carriers flying in the ULCC niche. High fuel costs and a unionized work force can quickly turn profits into losses.

Most ULCC airlines will try to keep costs down and that includes flying out of secondary airports because the fees there are generally lower than main airport hubs. Jetlines has chosen to initially fly out of Vancouver International Airport and its justification is the Vancouver market is large enough for Jetlines to be profitable. Whether that demand is there remains to be seen.

Smartlynx also appears to be playing it safe with its investment in Jetlines. The leasing agreement with Jetlines is only for 5 months, so it appears Smartlynx is taking a wait and see approach. Also, Smartlynx and InHarv's investment is contingent on Jetlines satisfying a number of conditions such as gaining approval from Transport Canada. Even before Jetlines can start its operations, there are a number of hurdles the airline needs to jump through first.

In anticipation for its first flight in Dec. 2019, Jetlines has been increasing its spending:

In looking at the operational activities alone, the monthly cash burn has been steadily increasing. That means from now (mid July 2019) to the end of the year, the airline is going to burn through at least another $3 million before it can see any revenue come in.

Despite the monthly cash burn and the poor track history of successful airlines operating in Canada, I still believe Jetlines can make money. The main reason for my optimism is because of its management team. The management team has had experiences working in different airlines before, and its CEO, Javier Suarez and newly appointed COO, Jyri Strandman has experiences in the ULCC segment.

Also, building a technological platform and integrating it into an airlines operations (or into any company) is not easy. I believe one of the reasons why it has taken them so long to get Jetlines ready is because it was taking its time to get everything ready, and it was not cutting corners.

I believe what the market will soon realize is the company is being run by a very experienced group of executives, with airline experiences that span the globe. Some of these people have been through the highs and lows of the industry. If anyone can guide this airline to profitability, it would be this team.

Jetlines do face some headwinds and it will be a while before this company is profitable. But what investors are investing in is a technological platform that can potentially disrupt the industry, managed by a group of executives who knows what they are doing, and is backed by sophisticated investors.

Sherif Samy
1.27K Followers
I studied Economics and Accounting at Wilfrid Laurier University, and I have earned designations in Certified Management Accounting (CMA CPA) and Certified Alternative Investment Analysts (CAIA).  I typically look for companies with above average dividend yields, under valued companies, or struggling companies with turn around potential.

Disclosure: I am/we are long JETMF. I wrote this article myself, and it expresses my own opinions. I am not receiving compensation for it (other than from Seeking Alpha). I have no business relationship with any company whose stock is mentioned in this article.