Ossen Innovation (NASDAQ:OSN) makes high performance pre-stressed steel used in large infrastructure projects, especially bridges. Ossen is 66% owned by Pujiang International (HK:2060) which completed an IPO on the Hong Kong Stock Exchange in May 2019 (LINK). A large part of the valuation of Pujiang shares on the HKEX is attributable to the OSN business which has a very low valuation on Nasdaq.

Pujiang’s successfully listing means there is no benefit to Ossen’s continued existence as an independent publicly traded company. The simplest and most favorable outcome for Ossen shareholders would be a cash or stock acquisition of OSN by Pujiang. However there is a risk that Pujiang management may attempt to impose an unfavorable outcome on Ossen’s public shareholders.

The disparity between the market valuations of Ossen and Pujiang shows that the HKEX is a superior venue for small cap Chinese companies that meet its listing criteria. An HKEX listing provides better corporate visibility, better long-term access to financing, and reduces risk from changes to US tax and regulatory policies.

There is no uncertainty about the relationship between Pujiang International and Ossen Innovation. Pujiang’s Global Offering document (LINK) shows the position of Ossen Innovation and its public shareholders within the group (colored notations added for clarity): 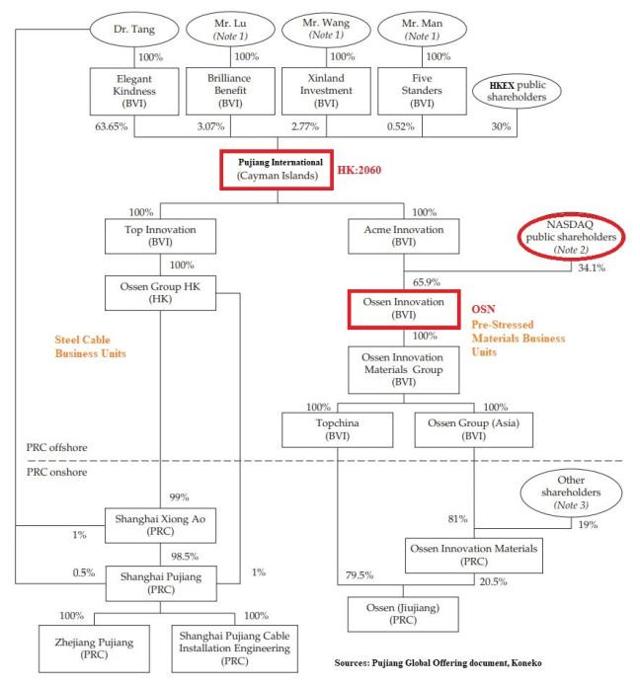 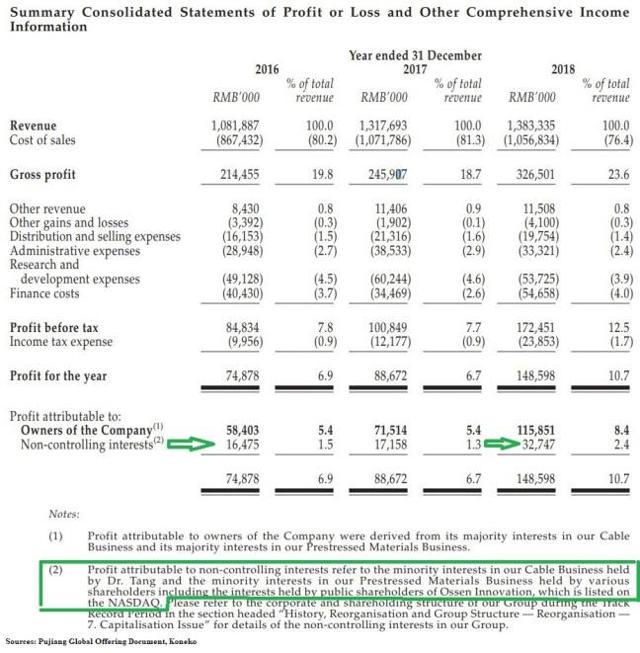 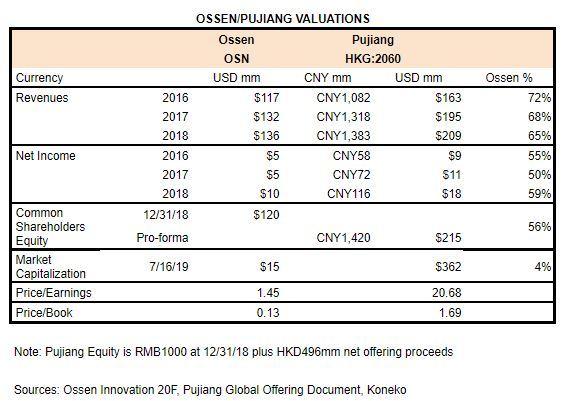 BENEFITS TO OSSEN FROM THE PUJIANG IPO

Pujiang’s Offering Document includes extensive background information about the pre-stressed steel business conducted by OSN and the outlook for its future growth. Highlights include:

126mm RMB of Pujiang’s IPO proceeds are designated for expansion of OSN’s prestressed materials business, effectively doubling its capacity. This would fulfill a long-time goal which OSN management had not been able to pursue because the persistently low valuation of OSN shares made it impossible to raise new equity capital. Reasons for expansion:

After completion of its IPO Pujiang provided a guarantee for 130mm RMB of bank loans to finance OSN’s capital expenditures (LINK). If the market outlook described by Pujiang proves accurate then the increased capacity would enable substantially higher OSN revenues and earnings from 2021.

Pujiang’s IPO was supported by 5 “cornerstone investors” who purchased 37% of the shares offered:

Participation of these high quality investors is a positive signal about how Pujiang is perceived in China. Its IPO priced at HK$2.68/share on 5/27 amidst weak sentiment related to trade tension, but has risen 30% since listing (to HK$3.49 on 7/16).

It would have been smart for group Chairman Dr. Tang to buy out the public shareholders of OSN through a simple cash offer at a low price in 2017 prior to filing of Pujiang’s HKEX IPO application. Instead Dr. Tang proposed a buyout with a dumb complex transaction at no price as described in prior Koneko articles:

Essentially, Dr. Tang would have taken OSN’s business for free leaving OSN as an empty shell which would acquire a medical device company through a reverse merger. A shameful “fairness opinion” estimated the new company could have a value ranging from US$174mm to $376mm even though the acquisition target had recently lost the license to sell its primary product and its financial statements contained a “going concern” warning.

The buyout offer and reverse merger were not completed because the medical device company failed to fulfill the closing conditions. OSN’s public shareholders retained their interest in a business whose earnings subsequently grew 94% in 2018 and whose fair value has now been demonstrated by the Pujiang IPO.

It would be harder to execute a similarly unfair transaction now that OSN’s controlling shareholder is a company listed and regulated in Hong Kong compared to 2017 when the controlling stake was held by Dr. Tang, an individual citizen and resident of the PRC.

IMPLICATIONS FOR OTHER US-LISTED CHINESE COMPANIES

The huge valuation disparity between Ossen and Pujiang demonstrates the disadvantage of a US listing for small cap Chinese companies. These companies may be able to achieve an IPO with favorable market timing, but poor investor understanding of their businesses leads to persistently low valuation which is damaging to their corporate reputation and makes it difficult or impossible to raise additional capital for growth. 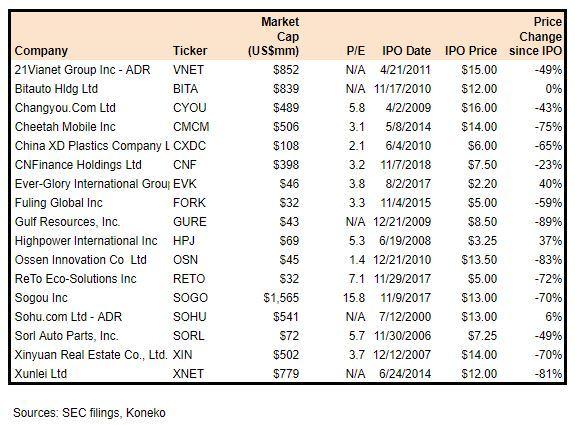 Every US-listed small cap Chinese company should be looking at transferring its primary listing to Hong Kong if it can meet the exchange criteria: 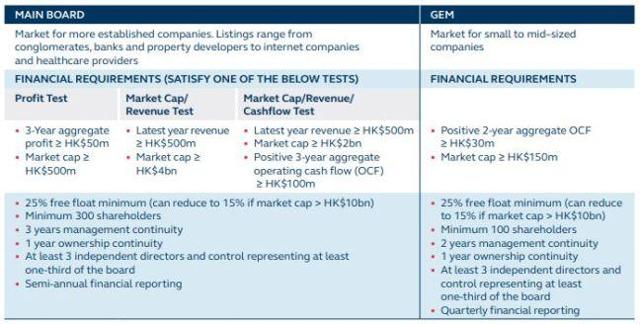 Transferring listing would also reduce corporate risks related to unpredictable changes in US taxes and regulation such as the proposed Ensuring Quality Information and Transparency for Abroad-Based Listings on our Exchanges (EQUITABLE) Act.

There is no benefit to Ossen’s continued existence as an independent publicly traded company. Pujiang could easily acquire Ossen in an all stock transaction that would be immediately accretive to EPS and book value, capture the full benefit of Ossen’s capacity expansion, and simplify the group’s legal and regulatory compliance.

This example illustrates the immediate benefit from a merger with an exchange ratio of 40 shares of Pujiang for each publicly held OSN ADS. This would provide consideration of about US$18/ADS, about 1X book value per ADS. 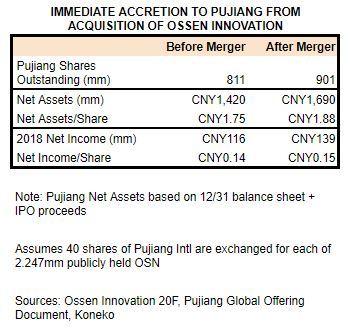 While such a share exchange would produce a win-win outcome, it is possible that Dr. Tang and Pujiang could make a new unfair offer that severely undervalued Ossen or even provided no value at all.

On a standalone basis OSN is extremely undervalued at a 1.5P/E with earnings poised to grow from capacity expansion. However if there is no corporate action to consolidate Pujiang and Ossen then OSN is likely to continue to be poorly understood and persistently undervalued by investors. Shares could continue to trade in a range of US$2-3 as they have for the past 7 years.

Ossen’s business is dependent on Chinese infrastructure development. The long period required for planning and construction of major projects provides good visibility into future order flow and limits exposure to short-term economic cycles. However government controlled entities tend to pay slowly so Ossen and Pujiang have financial risk associated with a working capital mismatch between payables to steel suppliers settled in an average of 15 days and receivables from construction customers settled in an average of 158 days.

At the time of publication the author was a shareholder of Ossen Innovation. The author hopes that publication of the facts in this article will increase the likelihood of fair treatment of Ossen Innovation shareholders and decrease the likelihood of a new unfair proposal from Ossen, Pujiang, and Dr. Tang. Investors are encouraged to check all of the key facts cited here from SEC filings and other external sources prior to making their own investment decisions.The author does not make any recommendation to any other person about investment in Ossen Innovation shares.

A link to this article was sent to Ossen CEO Wei Hua and to Ossen’s investor relations advisor. If they can provide public information as of 07/17/19 which shows there are errors in the text then corrections will be made as promptly as possible.

John Sheehy
753 Followers
"Advice is a dangerous gift, even from the wise to the wise, and all courses may run ill."

Disclosure: I am/we are long OSN. I wrote this article myself, and it expresses my own opinions. I am not receiving compensation for it. I have no business relationship with any company whose stock is mentioned in this article.