Produced by The Belgian Dentist for The Income Strategist.

Dear Readers, in case you missed it, Seeking Alpha produced a piece called Income Investing and the Changing Yield Curve, where they interviewed several income-oriented contributors. Highly recommend and it's a quick read.

We also published several articles recently on our suggestion to start thinking about getting more defensive with your portfolios. Earlier this week, we published Several Indications That A Recession is Coming, and The Belgian Dentist produced a piece for us called REITs are Slightly Overvalued - Time to Rebalance.

We urge readers not to get too greedy in this environment, especially if you're already drawing from your portfolio. In the meantime, we will continue to share some of our ideas with you and our take on certain market perspectives.

Core Vs. Non-Core REITs: Much Ado About Nothing

The investable commercial property universe has been greatly transformed over the last few decades. Whereas core sectors – apartments, industrial, office, and retail – used to comprise the vast majority of the property market, newer property types, such as self-storage, healthcare, data centers, and cannabis-growing warehouses now play a much bigger role.

REITs in other non-core sectors, including owners of student housing, cell towers, and single-family rentals, have subsequently joined the party. 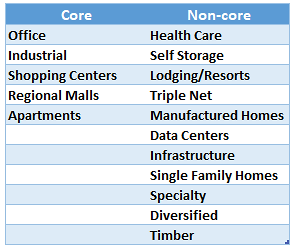 These sectors experienced impressive growth and non-core sectors now comprise over half of NAREIT’s All Equity REIT index.

Exhibit 2: Evolution of US REIT market

This shift makes ample sense when viewed against the backdrop of generational changes in the makeup of the U.S. economy.

Some of the newer additions, such as healthcare and student housing, have benefited from favorable demographics and/or innovations in living options, while others, such as cell towers and data centers, play integral roles in a technology sector that has enjoyed enormous growth. Meanwhile, some core sectors, such as office and retail, are confronting secular demand challenges that will likely continue to cause them to command a smaller share of the pie.

Exhibit 3: Evolution of US REIT market 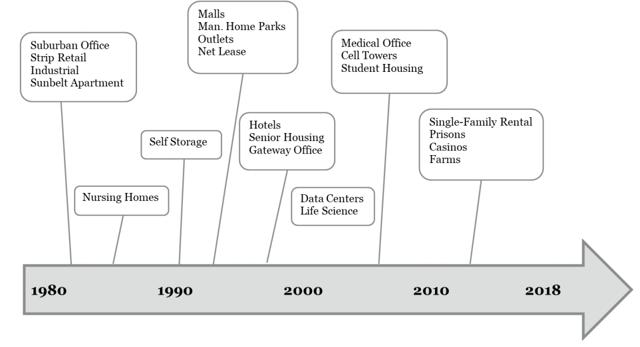 Over time, these developments have changed the nature of REITs as an asset class and broaden the potential for what can be done by active managers in listed real estate.

In terms of style we see REITs becoming less interest rate sensitive and a more growth-oriented asset class, with a greater diversity of demand drivers.

On reflection, this is intuitive. REITs hold those assets that are the basic infrastructure of every economy, and which enable those economies to work and grow - it should therefore come as no surprise that REITs are exposed to many of the same drivers of growth as the economy as a whole. In previous decades growth-supporting real estate was factories and warehouses. Today, it's datacenters and cellphone towers.

When people talk about thematic investing, however, they tend to mean exogenous growth stories such as e-commerce, cloud computing, artificial intelligence, next-generation mobility and autonomous vehicles, 5G connectivity, climate change and the environment, the emerging consumer and demographic aging.

The negative impact of e-commerce on some retail real estate assets is likely to be offset by its positive impact on warehouses, infill service centers, and self-service locker and pick-up locations.

Meanwhile, the advent of 5G is likely to increase demand for cellphone towers and fiber cable assets — and cellphone towers may be an important element in creating the communications network required to make next-generation mobility a reality, particularly outside of heavily populated urban centers. Both cloud computing and the processing power required for artificial intelligence generate demand for datacenters.

Away from technology themes, an aging population requires more localized healthcare facilities, and an important part of the emerging consumer theme is bigger leisure spend, which, in addition to its impact on retail assets, already is generating more demand for hotels, casinos and related assets in both emerging and developed markets. And turning to the environment, resource efficiency is an important quality differentiator across real estate assets in general, while timberland in particular is exposed to themes of climate change and sustainability.

So the addition of non-core sectors to the REIT investment universe is certainly very positive. But this doesn’t have to imply that investing in the core sector is a bad idea by definition!

Performance has ranged from good to great, as most of the sectors that have been in existence for at least 10 years have delivered returns that beat the average return generated by core sectors (apartments, industrial, office and retail).

In exhibit 4 you can find the total returns since 2000 of core (in blue) and non-core sectors (in green). 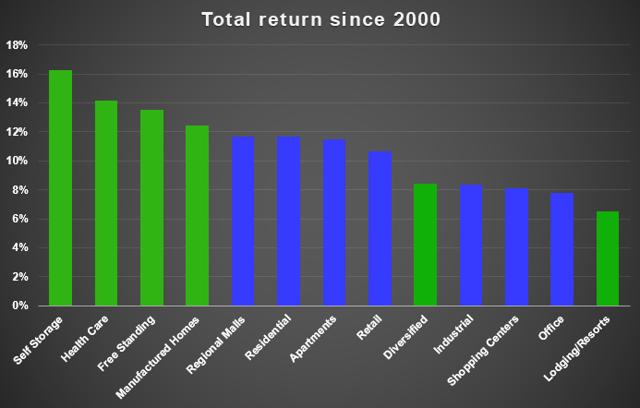 A number of non-core sectors like infrastructure, datacenters, specialty and single family homes only joined the party more recently. When we look at the returns since 2015 the non-core come out on top also. 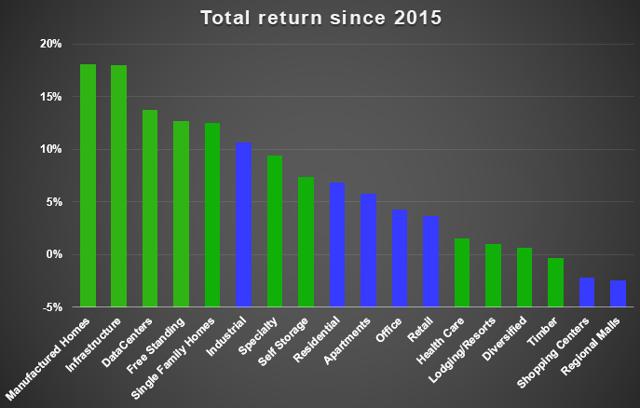 Is this total return difference justified by higher growth figures? In the below exhibits we plot the same store NOI growth.

In exhibit 6 you can find the same store NOI growth since 2000 of core (in blue) and non-core sectors (in green). 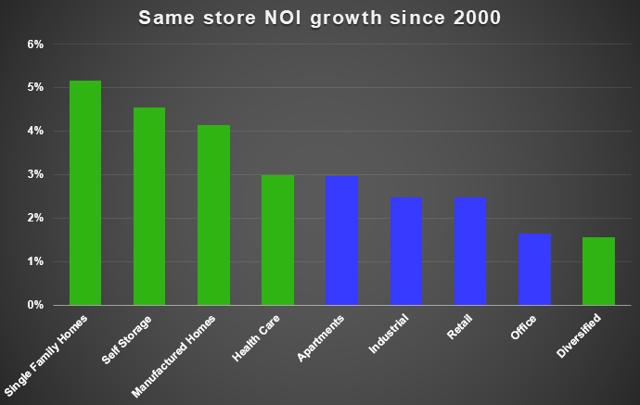 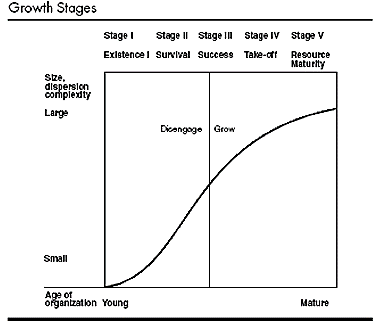 When we look at the same store NOI growth since 2015 the difference in growth between core and non-core growth is less pronounced. 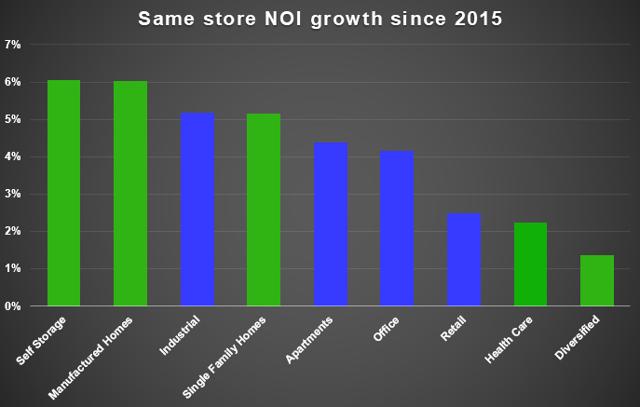 What growth figures can we expect in the future? The premium or discount at which REITs trade can give us an indication of expected growth.

The equity markets have a strong preference for higher levels of NAV growth, and at times when this exists, REITs are priced at premiums to NAV. When real estate value growth is more muted, short-term focused equity investors look elsewhere - leading to REITs trading at a discount.

Over the long term, U.S. REITs have, on average, traded at the value of their underlying real estate.

The historical core sectors (e.g. malls, strip centers, office) tend to trade at big discounts to private-market asset value, whereas the sectors that were not considered institutionalized real estate as of a decade or two ago (e.g. manufactured homes, data centers), still tend to trade at big premiums to net asset value. A premium to NAV does not mean a sector is overpriced, however.

Over the long term, the REIT premiums and discounts to NAV by sector are predictive of future changes in private market values.

If REIT stocks trade at big discounts to the value of their assets, private market asset values tend to fall.

If REITs trade at large premiums, private market asset values tend to rise which has a positive impact on the NAV growth of REITs.

Buying assets that trade at premiums to NAV in the public market could turn out to be a winning strategy for direct investors as high-premium sectors usually experience superior private-market real estate price appreciation in the near term.

In exhibit 9 we find an overview of the premium/discount at which the different REIT sectors are trading. The core sectors can be found in the blue squares. 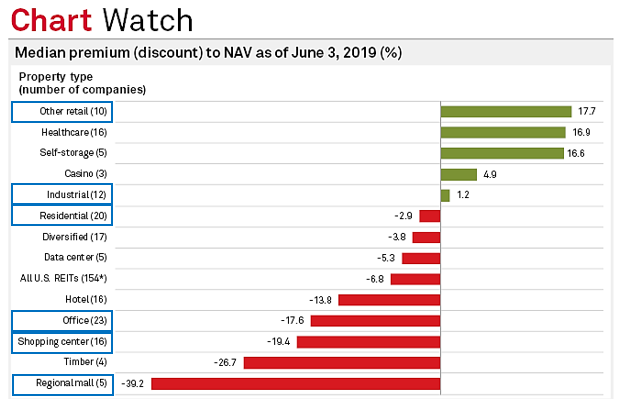 The team of Simply Safe Dividends calculates their so-called Dividend Safety Score. Their system takes into account more than a dozen fundamental metrics that influence a company's ability to continue paying dividends. Some of the metrics scrubbed are a company's:

The dividend safety is on average borderline safe for both the core and the non-core sectors.

When we compare the most important ratios for both core and non-core sectors we can only conclude that the difference is minimal. Non-core scores slightly better than core sectors.

Core sectors are slightly more expensive, but again this doesn’t have to imply that investing in the core sector is a bad idea by definition! It’s better to check every REIT sector separately on their investment merits.

When we compare core and non-core REIT sectors we can only conclude that there's not much difference between the two except as it relates to the underlying properties they invest in. On the level of balance sheet strength, dividend safety, growth and valuation, the differences are minimal.

As a consequence the core/non-core division should not be a guide in selecting REIT sectors or individual REITs.

We are e.g. positive on the following core REIT sectors: Shopping centers, apartments and industrial – and our favorite non-core sectors are manufactured homes, self-storage and several specific specialty REITs – one of which continues to fly high.

It's therefore better, in our opinion, to evaluate each REIT sector separately as each is driven by a unique set of factors. In an upcoming article, we will look at some of the advantages and disadvantages of investing in REITs through a REIT with broad exposure to REIT sectors and which in many cases is heavily weighted towards higher cap companies.

Portfolio strategies and investment ideas for income investors and retirees.

Besides tactical allocations and individual securities, join us to get access to our research, portfolios, and other benefits, including

Arturo Neto, CFA
10.98K Followers
I have been involved in financial services for almost 30 years. When I first started focusing on financial planning and money management it was out of a first-hand experience watching friends and family having to work well past retirement age because they hadn't saved or invested enough. Eventually I landed in a family office worth hundreds of millions of dollars where I was able to see 'how the other half lived' so to speak. I now operate a wealth advisory firm and publish articles on Seeking Alpha for DIY investors that prefer to manage their own money. As publisher of The Income Strategist, a premium subscription service on SA, my goal is to guide investors on how best to generate income from their investments. The service includes several income portfolios with different strategies that members can use independently or in combination. As part of the service, I also collaborate with other SA authors to provide broader and deeper coverage of investing. In addition to being a Chartered Financial Analyst, I am also a Certified Private Wealth Advisor and have an MBA from the Darden Graduate School of Business at the University of Virginia. I also hold a Master of Science in Finance and Bachelors in Finance from Florida International University. Having lived in Miami almost my entire life, my family and I relocated to Nashville, Tennessee in May 2018 in the pursuit of a better lifestyle and southern hospitality. If you're ever in the area, please do reach out. I'm happy to be teaming up with the following expert analyst contributors:1. Dilantha De Silva2. The Belgian Dentist

Disclosure: I am/we are long MPLX. I wrote this article myself, and it expresses my own opinions. I am not receiving compensation for it (other than from Seeking Alpha). I have no business relationship with any company whose stock is mentioned in this article.

Additional disclosure: This article is meant to identify an idea for further research and analysis and should not be taken as a recommendation to invest. It does not provide individualized advice or recommendations for any specific reader. Also note that we may not cover all relevant risks related to the ideas presented in this article. Readers should conduct their own due diligence and carefully consider their own investment objectives, risk tolerance, time horizon, tax situation, liquidity needs, and concentration levels, or contact their advisor to determine if any ideas presented here are appropriate for their unique circumstances. Furthermore, none of the ideas presented here are necessarily related to NFG Wealth Advisors or any portfolio managed by NFG.