FireEye (FEYE) has been trading sideways for some quarters now and investors seem to be losing patience as the sideways pattern is beginning to trend downwards. The lack of near-term value-generating catalyst to propel the stock has led to a general apathy towards this name. The stock is yet to actualize the growth it's projected to benefit from the cloud security market after the release of its automation solution, Helix. How much longer do investors have to wait to profit from this name?

The institutional investors that value cybersecurity company are great at their game. Most of them are ex-founders, inventors, CEOs, and board members of these cybersecurity firms. They’ve played this game longer than the average retail investors can imagine. Armed with this reality, I’ve decided to tone down the harshness of my analysis over the years. The days of hastily criticizing a company’s valuation are behind.

What I’m implying is that your entry price is more of a chance than an effort in diligent research. Instead, what matters is the ability of the company to attract two things:

For a growth company with little macro headwinds, every other thing tends to be immaterial. Now, don’t get me wrong. I’m not trying to work you over a hasty analysis with an unfound valuation. Rather, I’m trying to distill the true valuation drivers based on my years of experience tracking cyber-security stocks. And from my observation, those are the things that matter.

More demand: for startups, demand can be deciphered by the size of the target market, revenue & revenue growth, and the ability to attract top talents. Once the revenue growth story dries up, everyone jumps off the boat. How is FireEye trending? 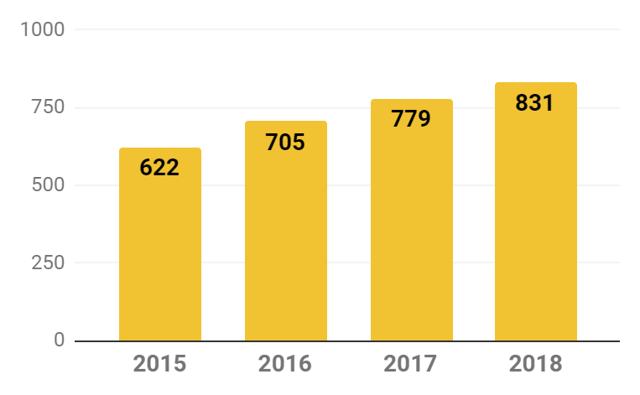 Revenue has trended upward over the past 5 years, except for one thing, valuation has gone ahead of the growth story. However, the real cause of the impatience is the chart below. 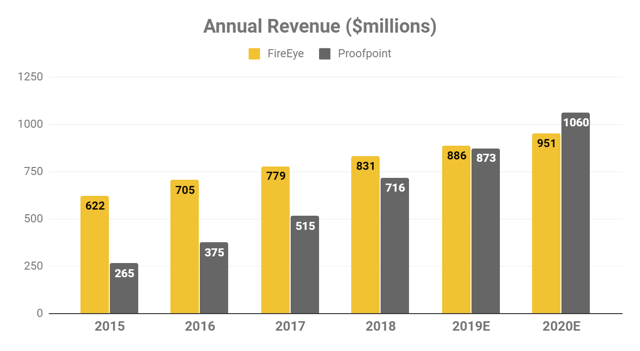 There are competitors out there gaining market share faster than FireEye and that’s all you need to confirm that more juice can be squeezed out of the orange. Now, before you start worrying, the sluggish growth narrative by itself won't keep FireEye down. Rather, you should be more worried about FireEye’s liquidity and ability to raise funds.

More funding: When you are able to convince smart people to believe in your project, that’s a sign that you are not just bullshitting. How is FireEye trending?

FireEye has the most cash on hand which is good except for its huge debt.

All these would have been understandable except for its profitability ratio. It lags competitors by a wide margin.

You can interpret this in a lot of ways. Bulls would see this as a sign that management needs to drive efficiency. This has been management’s narrative for some quarters now. Introduce products that are less capital intensive by penetrating the cloud security segment while expanding your target market. On the contrary, bears would see this as the justification of the current valuation. When you throw in some unfavorable trends like commodification by OEMs, low entry barrier into the cybersecurity market, and the difficulty inherent in raising pricing, you find it hard to see a light at the end of this tunnel.

Other metrics: analysts are going to try to get you worried about other metrics such as EBITDA, gross margin, operating margin, FCF and the rest. The real north star for me is revenue growth and market expansion. The music stops when the growth story stops. I wouldn’t worry about other things unless FireEye has found a way to monopolize its niche. Instead, what will keep me up at night as an equity investor would be FireEye’s ability to retains its talents, command a premium price on its cloud security solution, make cheap acquisitions to expand market share while avoiding the debt market if the stock fails to budge. This is tough given the lack of profitability. Something has to give. Either management cuts marketing spend or its R&D budget is reduced. Regardless, for this cybersecurity ship to stay afloat, a major asset acquisition, product release or cyberattack has to create a level of demand we haven’t witnessed in recent years. So far, there is no news of any significant change in the company's go-to-market strategy since the release of Helix and there goes your reason for the sideways trading pattern which has put a hard cap on any bust towards more upsides.

While analysts have an average price target of $19 with some optimism that FireEye will swing closer to the double-digit yearly revenue growth, I believe this is more of a function of its depressed valuation compared to competitors. It's barely 10% above its 52-week low. FireEye, like other cybersecurity stocks has a reputation of breaking out post-earnings-beat after a long bout of depressed valuation. The Street responds sharply to earnings surprises and FireEye has its risk/reward tilted in favor of more upsides given its depressed valuation and mamagement's record of delivering inline or above its projected revenue guidance.

I remain on the sideline with a HOLD rating due to the absence of near-term tailwinds to boost valuation.