At the outset of every year and usually at midyear, I lay out both short- and long-term forecasts. My method of short-term forecasting is pretty simple - in fact so simple, I call it the K.I.S.S. method. Even though the Index of Leading Indicators is the statistic most denigrated by Wall Street forecasters, it has the inconvenient habit of being right more often than the highly-paid punditocracy, especially at turning points. Since I'm not a highly paid Wall Street pundit, I simply rely upon the LEI for the short term and several methods of looking at long leading indicators for the longer term.

I am only discussing the second half of this year in this post. I will update my longer term forecast once Q2 GDP is reported.

The K.I.S.S. approach to short-term forecasting

The K.I.S.S. approach is in contrast to most of what you will read. Unfortunately, the direct link to Caroline Baum's article is now dead, but Professor Mark Thoma's discussion of it remains. Simply put, research has shown that what most forecasters do is simply extrapolate current trends into the future. Thus, they completely miss turning points. This is why you can be months into a recession with most commentators still unaware of the turn.

A quick look back at my H1 forecast

Before I discuss the next six months, let's take a look at what I forecast for the six months just passed. After all, why should you pay attention to a forecaster who has a poor track record or never marks their opinions to market? I want to be transparent with you so that you can have confidence in what you are reading.

Here's the conclusion of my long-term forecast for the first half of this year last July:

In summary, left to its own devices, while I suspect we will see a slowdown by early next year, I do not see any recession through midyear 2019."

Then, in my short term forecast at the beginning of this year, I said:

To sum up, the first quarter of 2019 should be positive. By the end of the second quarter, however, a sharp slowdown - maybe all the way to a stall - looks likely. But if Q2 GDP may come in under 1% annual growth, *left to its own devices* the economy is more likely than not to still be expanding."

Although we don't have Q2 GDP yet, two of the other four metrics usually relied upon by the NBER for determining expansions and recessions - industrial production and real personal income - are below their December levels, and real total business sales peaked in January. Only nonfarm payrolls have continued to increase substantially:

Additionally, all four have undergone deceleration over the past 12 months, just as I forecast:

Now let's turn to the next six months. Six months ago in my longer term forecast, I said:

It had already appeared that the more likely outcome would be that in the second half of 2019, left to its own devices, the economy would just barely escape recession, although poor government policy choices this year could easily tip the balance. The further deterioration [in the long leading indicators] described above warrants going on Recession Watch one year out - i.e., beginning Q4 2019."

I subsequently explained that a "watch" should be interpreted like a hurricane watch - i.e., conditions have a significant chance of occurring but aren't nearly certain yet.

Since that time, we should have been receiving confirmation in the short leading indicators. To cut to the chase, here's what the Conference Board's Index of Leading Indicators looks like over the past two years, via Briefing.com: 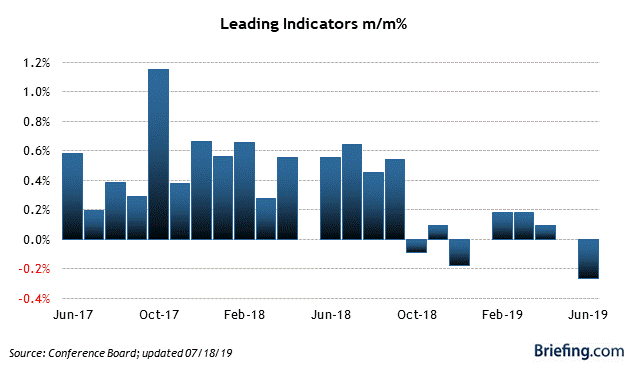 For the last nine months, the net advance in this index has been... zero. Quite simply, since I wrote my forecast in January, the LEI has been telling us to expect that the economy will be somewhere near stall speed later in this year. In the last six months, the LEI is up +0.2%. In the last four, it is unchanged.

Interestingly, although the components involved are different, the net change over the last nine months is almost exactly the same at the +0.1% advance in the nine months between June 2015 and March 2016: 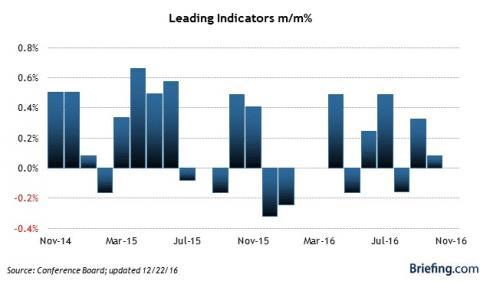 Here's what the four NBER components looked like during the 2015-2106 time frame:

While Q1 2019 GDP came in at over 3%, that was largely due to an inventory build. Real personal consumption expenditures only grew at a rate of +0.9% *annualized.*

One final important note: the LEI combines some short leading indicators with other longer leading ones like housing permits. Two of the most important short-term indicators, the ISM manufacturing new orders index (and, incidentally, the regional Fed new orders indexes) and initial jobless claims, are both still positive. This almost certainly rules out a recession in Q3, while it remains possible in Q4 should both roll over in the next couple of months.

My base case over the past few months has been slowdown but no recession. Just as the long leading indicators told us a year ago, the short leading indicators over the past six months have told us to expect an economy that is on the cusp of a downturn, and maybe - but not probably - in one. And so, true to my "just the facts, ma'am" approach, that is my forecast for the rest of this year: stagnation with a moderate bias towards continued expansion rather than contraction.

New Deal Democrat
3.47K Followers
New Deal democrat As a professional who started an individual investor for almost 30 yeas ago, I quickly focused on economic cycles and the order in which they typically proceed. I have been writing about the economy for nearly 15 of those years, developing several alternate systems that include mid-cycle, long leading, short leading, coincident, lagging and long lagging indicators. I also focus particularly on their effects on average working and middle class Americans.