Today, we want to share our analysis of Corvus Pharmaceuticals (NASDAQ:CRVS) with you. Over the last year, its stock largely fluctuated, falling from ~ $11 in October 2018 to about $3 in July 2019. Recently, the company’s stock price grew by over 70%, driven by insider buying. Corvus Pharmaceuticals has a debt-free balance sheet with ~60% of its market cap in cash, and its lead drug has shown promising outcomes. So, let’s consider this company in-depth.

Corvus Pharmaceuticals is a clinical-stage biotechnology company focused on the development of novel immuno-oncology therapies. The company, based in Burlingame, California, was founded in 2014 and went public in March 2016, selling 4.7M shares at $15.00 per share. Corvus Pharmaceuticals is led by Richard Miller who joined the company in 2014 from Pharmacyclics. Currently, the company has a market cap of ~ $180M and trades around $6 per share.

The company’s pipeline composed of five immuno-oncology drugs with differentiated mechanisms of action:

CPI-444 is an oral small molecule antagonist of the adenosine A2A receptor (A2AR). Corvus’s CPI-444-001 Phase 1/1b of CPI-444 as monotherapy, and in combination with atezolizumab for the treatment of Renal Cell Carcinoma (RCC) showed promising results: Out of the 35 patients who received combination therapy, four achieved a Partial Response (PR), with a median Progression-Free Survival (PFS) of 5.9 months. Additionally, out of the 33 patients who received CPI-444 as a single agent, one achieved PR with a median PFS of 4.0 months. What is more, the combination of CPI-444 and atezolizumab had an Overall Survival rate (OS) of 88% at 20 months while CPI-444 as a monotherapy had an OS of 65% at 16 months. The drug was well-tolerated as a monotherapy and in combination with no unexpected toxicities.

With these results as a basis, CPI-444 is being investigated in a Phase 1b/2 trial that will access its efficacy in combination with atezolizumab for patients with RCC who have failed therapies with both anti-PD-(L)1 antibodies and tyrosine kinase inhibitors (TKIs). Sequential primary endpoints are OS, PFS, and Overall Response Rate (ORR). The study is currently enrolling patients with a data readout anticipated by 2021. Looking ahead, Corvus plans to launch a late-stage study of CPI-444 around the end of 2019.

Another of Corvus’s clinical trial of CPI-444, which is in Phase 1b/2 Phase, is being developed together with a subsidiary of Roche (OTCQX:RHHBY), Genentech, Inc. The companies announced in May 2017 that they would collaborate on a trial which plans to evaluate Corvus’s CPI-444 together with Genentech’s monoclonal antibody, atezolizumab, for the treatment of patients with non-small cell lung cancer (NSCLC) who are resistant and/or refractory to prior therapy with an anti-PD-(L)1 antibody. The Phase 1b/2 will enroll up to 65 patients and will be a double-blind, randomized, controlled trial comparing CPI-444 plus atezolizumab to standard of care (docetaxel) with ORR primary endpoint. Important to note, the companies will share expenses associated with this trial. We do not expect initial results before later next year.

CPI-006 is a humanized IgG1 Fcγ receptor that targets CD73, blocking adenosine production. The company is conducting Phase 1/1b for the treatment of patients with NSCLC, RCC, and other solid tumors. The trial will evaluate both the efficacy and the safety of CPI-006 as a single agent, in combination with CPI-444, and in combination with pembrolizumab, immunotherapy for metastatic melanoma, and metastatic NSCLC marketed by Merck (MRK). Per trial design, CPI-444 administered as a one-hour IV infusion every three weeks using doses of 1 mg/kg, 3 mg/kg, 6 mg/kg, 12 mg/kg, 18 mg/kg, 24 mg/kg, and a fixed-dose of CPI-444 (100 mg) for the combination. Corvus presented initial positive results in June 2019 showing that the drug was safe as monotherapy at least to the dosage of 12 mg/kg and in combination with CPI-444 at a dose of 6 mg/kg. What is more, preliminary data showed increasing disease control with higher doses and enhancement with combination therapy.

The next drug in development is a selective Interleukin-2-Inducible T-cell Kinase (ITK) Inhibitor, CPI-818, for the treatment of patients with T-Cell Lymphoma. The biotech presented CPI-818 preclinical data at the 11th Annual T-cell Lymphoma Forum on January 2019, where it showed encouraging clinical activity in Dogs with T-Cell Lymphomas. On May 9th, the company announced that it initiated enrollment in the Phase 1/1b trial evaluating CPI-818 for the treatment of patients with various malignant T-cell lymphomas. Initial data for the trial is expected at the end of 2019.

Corvus also expanded its pipeline with an adenosine A2B receptor antagonist and myeloid cell suppression. Given that both assets are still in the preclinical stage, we will not go into further details at the moment.

Let’s take a look at Corvus’s most recent Q1 figures: 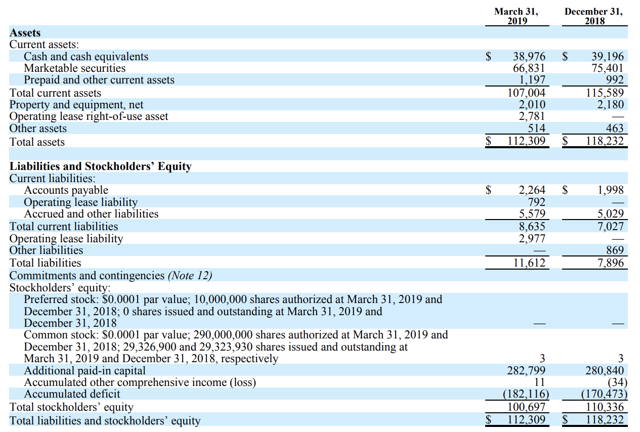 As of March 31, Corvus had cash and cash equivalents of about $38.9M and marketable securities (U.S. government agency securities and corporate debt obligations) of $66.8M for a total of $105.7M, making up almost 95% of its balance sheet. What is more, Corvus is currently free of any debt.

Typically for a clinical-stage biotechnology company, Corvus is currently bringing in no revenues while spending significant amounts on R&D and G&A:

In the first three months of 2019, the Research and Development (R&D) expenses decreased from $12.1M to $9.4M, driven primarily by a decrease in CPI-444 and CPI‑006 manufacturing costs. Given the company’s intentions to initiate a late-stage study of CPI-444, we would expect that the R&D expenses will increase substantially over the next quarters. G&A expenses increased moderately during the three months ended March 31, 2019, as compared to the three months ended March 31, 2018, due primarily to personnel and related costs. In the Q1, Corvus spent around $9M in cash (net loss adjusted for non-cash items such as stock-based compensation and D&A). In 2017 and 2018, cash burn for the full year stood at $46.2M and $40.9M, respectively, and based on the first three months of 2019, we would estimate Corvus’s cash burn for 2019 as a whole to be somewhere around $39M. Based on that, we would expect funds to be sufficient for at least 14 to 24 months. Management also expects that its cash, cash equivalents, and marketable securities will be sufficient to fund the company’s operations at least the next twelve months from the release date of the Q1 results.

Looking at the daily chart, we can see what is going on with CRVS. The stock has made a significant move after Corvus’s top shareholder, OrbiMed, disclosed its increased stake in the company. The share price continued to climb following the recent purchases by CEO Dr. Miller and held above $5.00. Currently, the stock is floating around $6.00, which remains the key area to watch in terms of providing support for price action. If the stock can hold above $6.00 and start to climb, it will face only two levels of technical resistance, at $8.00 and $9.00, before moving back to its previous highs around $11.00.

As seen above, over the last year, until January, Corvus’s share price declined from $11.23 to $3.22, and then was locked mostly in the $3.5-5 range. However, the company’s largest decline (H2 2018) was not driven by any negative company news, but instead, was caused by sector-wide events. A selloff in biotech, driven by market volatility and macro behavior, drove the massive decline in Corvus's stock price in H2 2018. However, even though we looked through all the major press releases, we were not able to find any decline that was due to company news (with the exception of secondary stock offering). What is more, the company posted a series of favorable data for its lead clinical programs in October and January. So, we do not expect Corvus to drop below its recent low of $5.00. However, in the absolute worst case, the stock price might fall to its cash value of $3.53 per share, which we would find highly unrealistic. Even without upcoming pipeline news, we would expect the stock price to be $8.00, assuming a resurgence to the mean pre-selloff and technical levels. If we factor positive clinical data for CPI-818 in late 2019, we would not find a movement to around $10.00 unlikely.

Investing in clinical-stage biotechnology firm is associated with many risks, including significant amounts of cash required for R&D in the absence of revenues, risks around drug development, and competition from other firms in the biotechnology industry. Although the firm has demonstrated promising results for both the CPI-444 and CPI-006 programs, it is possible that future trials will not reiterate those results. If its CPI-444 franchise fails to realize its growth prospects, Corvus’s stock might fall substantially. What is more, the CPI-818 Phase 1/1b trial could fail to deliver the efficacy it demonstrated in preclinical models, thus leading to a decline in the stock price. However, in regards to the downside, the company has ~$105M of cash on the balance sheet, equivalent to $3.53 per share, with a burn rate of approx. $0.30 per quarter. We would not find it unlikely for the stock to fall below these levels. Additionally, the company’s drugs are not the first to market, but they try to gain market share in a very competitive space dominated by the largest companies in the biotechnology industry (Merck, Genentech, AstraZeneca (AZN), Bristol-Myers Squibb (BMY), and others).

Also, there is an inherent multiple risk as biotech stocks move out of favor in the market. In our case, CRVS has tracked the SPRD Biotech ETF (XBI) significantly over the last year at a correlation coefficient of 0.654. Investors should also consider that even with positive trial results, the stock might not see the upside movement. Finally, the company is well-funded for now, but in the absence of revenues, Corvus would likely be dependent on a funding raise to maintain its operations, which may cause a further dilution of shareholders' equity.

We believe CRVS at these levels of $6 per share is a “Buy.” The data that we analyzed in this article causes us to be bullish on the company. Thus, we believe that the company, at the current levels, could be a promising “buy and hold” stock, as it offers an attractive combination of a strong balance sheet and a promising pipeline. However, investors should be careful when entering into the stock at current levels and use limit orders to avoid negative surprises in a stock like Corvus with large bid-ask spread.

Author’s note: Thank you for reading. If you liked this article and would like to receive our future articles covering the biotech field, please click the orange “Follow” button. Good Luck!

PylBio Investment
314 Followers
PylBio Investment is an investment research team focused on biotech companies that represents a lot of "shots" on goal. We focus our trade strategy around "special situations" (such as catalysts, potential acquisitions or spin-offs) and how to make money from those catalysts, as direct stock purchases, combined with option-based approaches for risk minimization or through our option-based strategies.