As of July 19, the cobalt spot price was US$12.93/lb, up slightly from US12.70/lb last month. The LME cobalt price is US$26,500/tonne. LME Cobalt inventory was 840 tonnes, a slight fall in July. More details on cobalt pricing (in particular the more relevant cobalt sulphate), can be found here at Fast Markets MB. 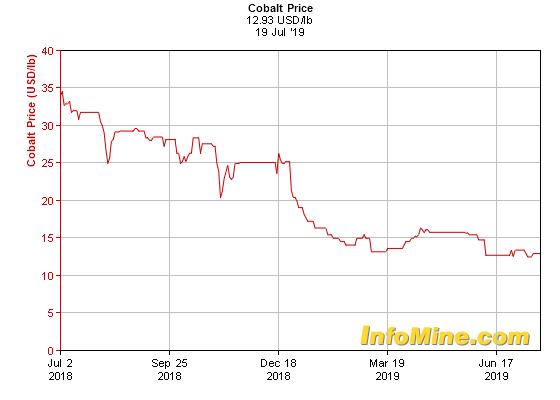 If Bloomberg’s demand forecasts are even close to accurate, battery manufacturers who make products for transportation and stationary applications will face crippling cobalt shortages that will drive a stake through the heart of global EV sales growth in 2023. 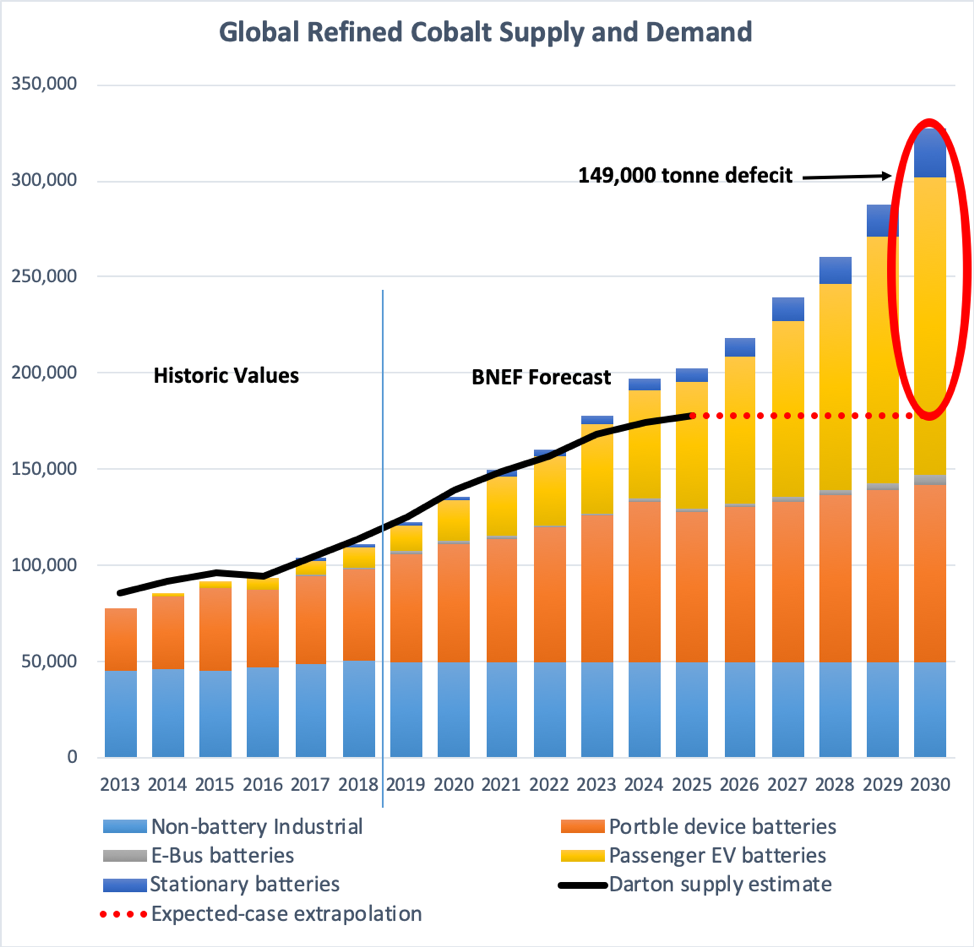 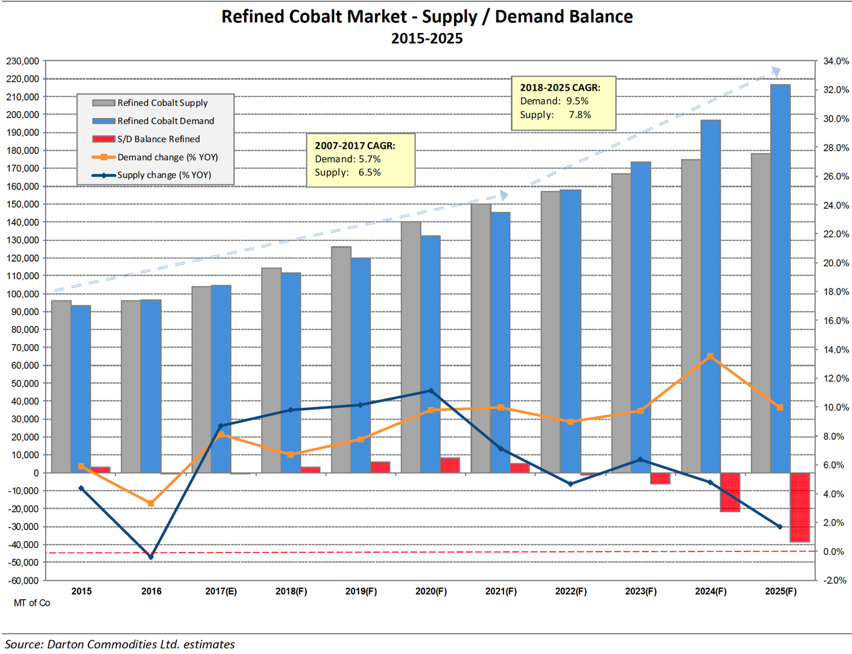 Why the cobalt market needs Congo's 'illegal' miners: Andy Home. CRU estimates that “average artisanal trader netbacks” surged 150% to $18 per lb between 2016 and 2017 with production unsurprisingly booming from 6,500 tonnes to over 19,000 tonnes......Analysts at Citi forecast the market to remain in surplus over 2019-2022 to the tune of between 4,000 and 14,000 tonnes per year. (“Cobalt 2019-2025 Outlook”, Dec. 4, 2018). However post 2022 with mine supply growth slowing, cobalt demand from EVs rising rapidly, and work in progress inventories rising notably, we expect the balances to shift into significant deficit, and prices to rise back to $80,000 per ton and potentially higher,” Citi says.

Battery and Supply chain conf: Six things we learned in Qiandaohu. Chinese cobalt metal buys should top up inventories when prices in China drop to 180,000 yuan per tonne ($10.52 per lb, less China-VAT). The latest price is also close to the lowest level in almost three years. But even as the current low price boosts some restocking, other market participants doubted such buying will cap the downtrend immediately or even revive the price, citing oversupply in the cobalt market.

Congo’s swing producers turn to copper after cobalt meltdown. Artisanal output of cobalt could drop 70% this year: Darton. Production of hand-dug cobalt in the Democratic Republic of Congo is poised to drop sharply after prices tumbled, prompting many of the country’s thousands of artisanal miners to switch focus to copper instead. Congo last year produced about 72% of the world’s cobalt.

Cobalt Market Update: Q2 2019 in review. Cobalt prices continued their downtrend in Q2, with oversupply worries impacting investor sentiment toward the sector. However, demand for cobalt, a key metal in the lithium-ion batteries used to power electric vehicles (EVs), is still expected to surge in the long term. Many market participants continue to believe that demand will outstrip supply even if cobalt content in cathodes is reduced......In addition, after China reduced its subsidy policy, which came into full effect on June 25, the Chinese are fearing a dip in EV demand — fueling skepticism about the ramp up in production of EVs. “I don’t think that we will see a significant recovery in prices in 2019 without a major supply shock as the market continues to be in oversupply with the production ramp ups happening in the Democratic Republic of Congo (DRC),” Rawles added.....“With prices as low as they are we are starting to see it impact the supply side of the market in various ways with production slowing or stopping altogether in some cases,” Rawles added.

Publication of 2018 payments to governments report. Steve Kalmin, Chief Financial Officer, noted, "Our activities within our operating countries enable governments to monetise their natural resources. Governments can use the tax and royalty payments we make to provide its citizens with services and infrastructure that improve their quality of life. During 2018, our total payments to government were around $5.7 billion."

Glencore: Congolese army fires in the air during protest near Glencore plant. Congolese soldiers fired in the air on Monday as illegal miners protested outside a metallurgical plant on a copper and cobalt concession run by Glencore, a witness said..... Glencore said that, prior to last week's eviction, about 2,000 illegal miners were entering KCC every day. The Lualaba government estimates that 170,000 informal miners operate across the province. (see also below under Katanga Mining).

Announcement regarding FARDC in area around Kamoto Copper Company. Katanga Mining Limited received confirmation today from its 75%-owned subsidiary, Kamoto Copper Company (“KCC”) that the armed forces of the DRC (FARDC) are in the area around the operations of KCC. This follows a growing presence of illegal artisanal miners throughout industrial mining concessions in the Kolwezi area, which led to the tragic incident at KCC on June 27, 2019.

You can also read my original article from January 1, 2017, "Katanga Mining is a potential turnaround story." Followers of mine who bought back then with me at CAD 0.13 and sold when I suggested Trend Investing subscribers to reduce at CAD 2.89 made a nice 2,123% gain in just over a year.

ERG own the Metalkol facility in the DRC where ERG processes cobalt and copper tailings with a capacity of up to 24,000 tonnes of cobalt pa.

Fire incident in Hoboken. This morning a fire broke out at a peripheral installation of the smelter at Umicore’s Hoboken plant. No casualties are reported. The fire brigade extinguished the fire. The impacted installation is currently shut down while the rest of the plant remains in operation.

Notice Regarding the approval of the proposal "Renewal of countermeasures to large-scale acquisitions of Sumitomo Metal Mining Co., Ltd. shares (takeover defense measures)" at the 94th ordinary General Meeting of shareholders.

"Highlights of Mineral Reserve and Resource Estimates A comparison of the mineral reserve estimates in the 2018 AIF and 2019 Technical Report is summarized in the following table":

No significant news for the month. I did come across a good slide from their May 2019 presentation. The 80 year mine life at their Taimyr Peninsula mine is impressive. 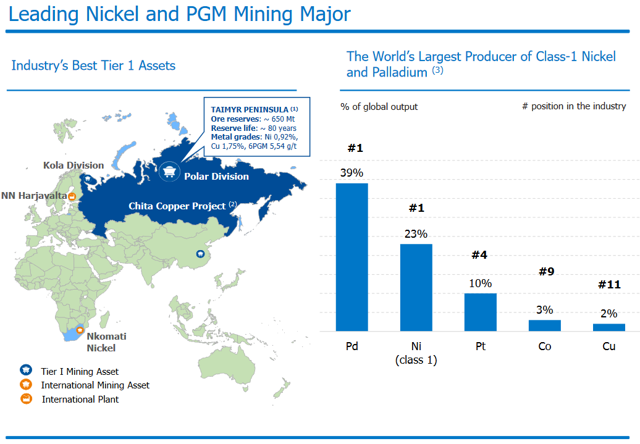 Investors can also read my article: "Time To Buy Norilsk Nickel Before The Nickel Boom Perhaps Starts In 2018, or my article "An update on Norilisk Nickel."

eCobalt shareholders approve plan of arrangement with Jervois. Jervois Mining Limited ("Jervois"), will acquire all of the issued and outstanding Common Shares not already owned by Jervois, whereby each common share of eCobalt will be exchanged for 1.65 common shares of Jervois.

Investors can read about the merger with Jervois Mining here.

Clean TeQ has 132kt contained cobalt at their Sunrise project.

In total, Ardea has 405kt of contained cobalt and 5.46mt of contained nickel at their KNP project near Kalgoorlie in Western Australia.

In total Cobalt Blue currently has 79.5kt of contained cobalt at their Thackaringa Cobalt Project in NSW, Australia.

Update on progress with independent expert determination....COB also advised that another Dispute Notice, issued by BPL under the TJVA regarding Dilution, was the subject of mediation between the parties. That Dispute Notice will now be determined by the Independent Expert. The parties have now provided their evidentiary material and submissions to the Expert and a final determination is expected to be delivered by mid to late July 2019.

My interview with CEO Joe Kaderavek is on Trend Investing here, with an updated interview discussing the LG deal here, and my update article here.

For more information you can read my article "Aeon Metals May Have A World Class Copper And Cobalt Sulphide Resource In Northern Australia."

Note: Investors can learn more by reading my article "Havilah Resources Has Huge Potential and/or my update article. You can also view my CEO interview here, and the company presentation here.

GME Resources own the NiWest Nickel-Cobalt Project located adjacent to Glencore’s Murrin Murrin Nickel operations in the North Eastern Goldfields of Western Australia. The NiWest Project which has an estimated 830,000 tonnes of nickel metal and 52,000 tonnes of cobalt.

No news for the month

No cobalt related news for the month.

Investors can view my CEO interview here, and an investor presentation here.

No cobalt related news for the month.

Nzuri 85% own the Kalongwe copper-cobalt project in the Kolwezi region of the Democratic Republic of Congo (DRC).

Celsius owns 100% of Opuwo Cobalt Pty Ltd, which in turn holds the right to earn up to 76% of the Opuwo Cobalt (sulphide) Project in Namibia.

Barra is developing the Mt Thirsty project, which is a 50/50 joint venture with Conico, to produce cobalt suitable for the metal, chemical and battery markets. Barra is has two promising gold projects in western Australia.

Cobalt27 is a listed investment company that offers unique exposure to a portfolio of cobalt and nickel assets - Cobalt metal, cobalt royalties and direct cobalt/nickel properties, and one lithium royalty. Cobalt27 owns 2,905.7 tonnes of cobalt.