Earthstone Energy's (NYSE:ESTE) management has a long and successful track record. This management has built and sold several companies before the current company. As can be seen below, that is the main business here which slightly differentiates this company's strategy from many competitors'. An experience like that in smaller companies is hard to find and helps to reduce the long-term risk of failure. 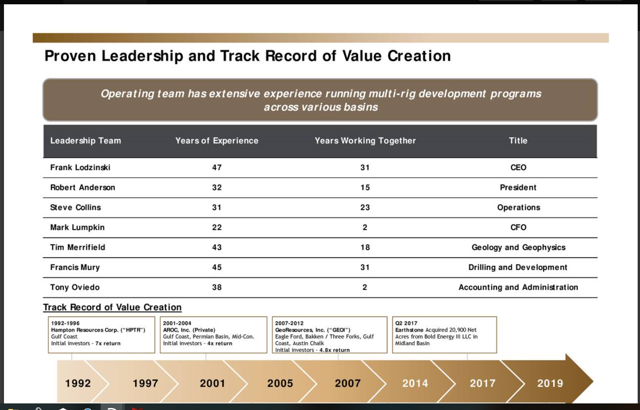 As shown above, the process completes about every five years. This time around the big oil price drop a few years back, combined with continuing technology improvements, has made a far more challenging environment for those that build and sell companies. Plus this industry has gone from being out of favor to being extremely out of favor.

The main company backers still appear to be hanging on to their holdings though.

The chart makes clear that the initial investors paid far more than the current stock price. This happened despite the fact that management chose to begin the company around the time of the large oil price drop at the end of 2015. Supposedly that is an excellent time to begin a new company as distressed property sales abounded.

Earthstone initially participated in a reverse merger to bring the current team and a lot of cash to the company. Ideally, that set the company up to purchase bargains and repeat a process that had been very successful for management in the past. The company could be sold during the next oil price rally for another "home run."

However, Mr. Market had some other ideas this time around. Bargains became better bargains even during oil price rallies. More importantly, the once "hot" Bakken that provided the successful sale of predecessor GeoResources went cold. The new "hot" basin became the Permian. Therefore, a company with base operations in the Bakken would not sell as well as a company located in the Permian. That necessitated transferring operations to the Permian and the eventual sale of most, if not all, of the Bakken operations.

In the meantime, Permian pricing was increasing and industry operations were constantly changing. Despite some decent results on the acreage purchased, the unconventional oil and gas industry as well as the stock of this company has been repriced over the last few years. All of this and more has been very frustrating to a management that is used to "popping the cork" every five years or so. Now this management finds itself in a deep hole from which it needs to dig itself out.

Nonetheless, this experienced management team has unlimited time with which to show a profit. Successful business teams such as this one are not inclined to give up when there are opportunities to systematically recover from the setbacks that followed the company's startup.

This company's management has given itself extra chances by keeping a low debt or even debt-free balance sheet. Generally, EBITDAX or even cash flow equals or exceeds debt. Generally, managements that pursue a conservative balance sheet strategy rarely get into serious trouble. When stock price setbacks as shown above happen, they simply remain opportunistic for accretive acquisitions or other long-term strategies that recover from the initial setbacks.

Normally when there is debt on the balance sheet, then management follows that situation with a sale of stock to eliminate the debt and maintain flexibility for an acquisition. Therefore, the presence of debt on the balance sheet currently indicates that management expects a stronger stock price in the near future along with good operating results so that the balance sheet can be easily "cleaned up." For investors there is a near-term profit to be made at the current price. For patient long-term investors, there is a chance to invest alongside one of the most experienced managements in the industry at starting, acquisitions, and finally selling companies. Furthermore, a beginning position now can be made at much cheaper prices than the original institutions paid.

Operations in the Midland Basin have grown exponentially since the original entry back in 2016. As is typical for this management, much of the cash needed was funded by stock sales. 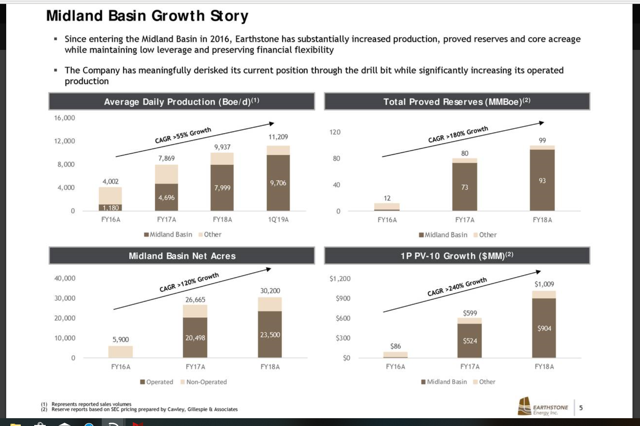 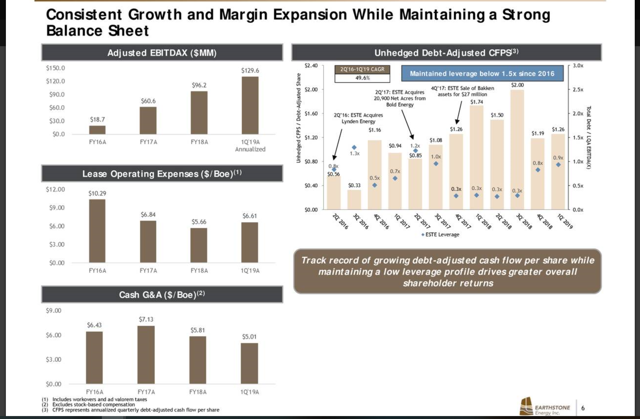 The expansion into the Midland Basin is significant in that the company avoided the expensive Reeves County acreage while pursuing above-average returns. Many companies trumpet the great well results while never revealing to shareholders the acreage cost per well.

There are companies that paid as much as $3 million per site to drill in Reeves County and other favorable acreage. Even if those companies paid stock for the acreage, the company's profitability may never approach anything close to what the revealed well breakeven would indicate because that acreage cost per well is not part of the payback period or the internal rate of return shown to investors.

The Midland Basin acreage tends to be far cheaper because the acreage is not as "hot" as Reeves County. The somewhat more gassy production tendencies are not as desirable. Therefore, this company is in a position to show excellent results while spending far less money per acre for each drill site. That is where this management earns its relatively expensive administrative costs shown above.

So far the stock price has not achieved the corresponding results. Then again, there is never a guarantee that a good strategy will result in investment success. All that really happened is the odds were loaded in favor of the investor. The last few years had industry-wide events to negate that favorable strategy. But those events do not happen often. Therefore the continuance of management strategies should result in long-term, above-average returns from the current stock price.

Management is definitely emphasizing the best in the industry margins for the Basin in which operations are located. The staying power during cyclical industry downturns is emphasized and is key to the value paid by a potential acquirer. 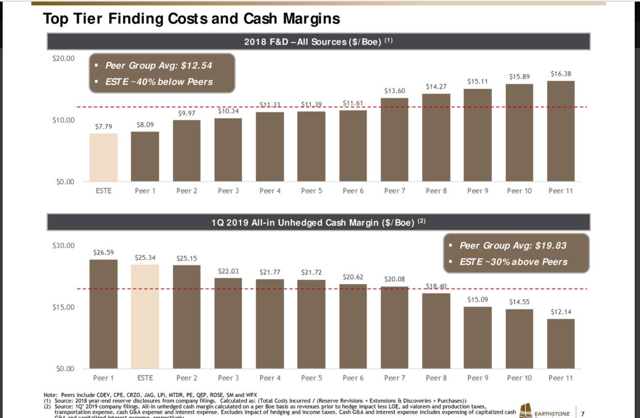 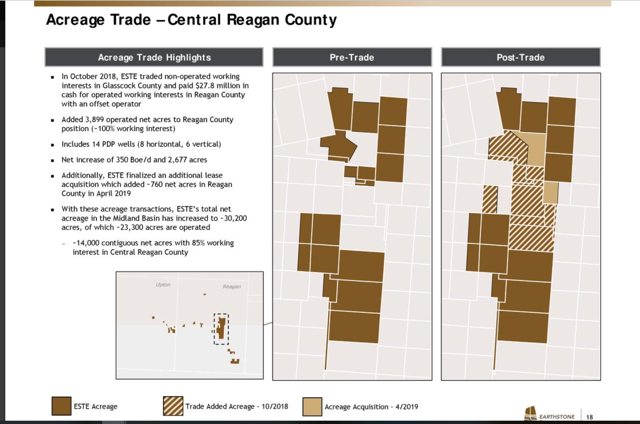 The continuing decline of the costs shown above means that depreciation will continue to decline as new wells are added. This process will not only increase earnings in the future, but it also lowers the company's breakeven and enables a reported profitability increase in the future.

A further push to lower operating costs is gained by swapping small parcels to enhance the contiguous acreage shown above. This enables longer more profitable wells as well as enable more efficient operating conditions. These kinds of enhancements tend to be permanent and give the company an advantage over smaller operators with scattered parcels.

This management will enhance profitability going forward. The stock has reached bargain levels rarely seen for this experienced management. Investors can now invest alongside a lot of "big-boys" at a far lower cost. 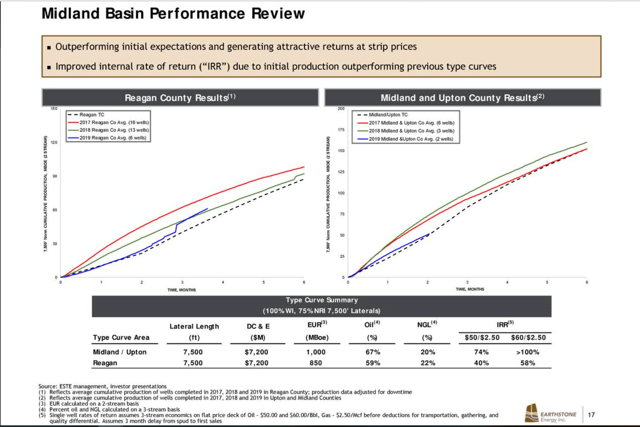 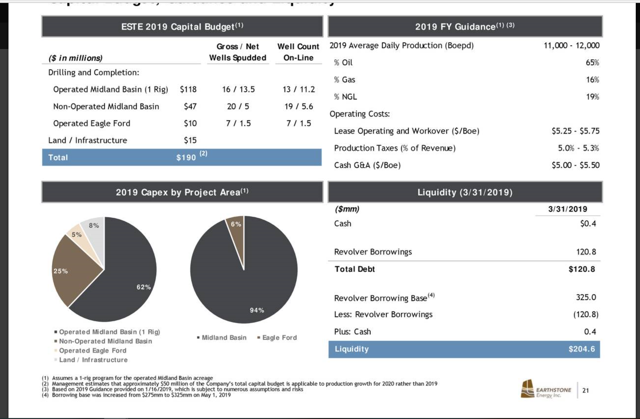 Management clearly intends to outspend cash flow from operating activities this year. But the rates of return on the wells drilled clearly indicate that this strategy is advisable. The balance sheet debt will not be very burdensome because the rapid cash flow growth accompanying that outspend will handle the increased debt load easily.

More than likely if stock prices rise with the company oil price rally, this management will again sell stock to maximize opportunities during the next inevitable industry downturn.

The current market emphasis on free cash flow will probably fade as all hot topics fade. Free cash flow in this industry means very little to most experienced investors. One would instead expect a company such as this one with low debt to maximize growth during a period of favorable returns and then pay debt during the next downturn while waiting for the next cyclical recovery. Here, free cash flow would indicate a missed opportunity to earn 70% or more per well on cash invested. That would easily cover any interest charges and more.

Long-term investors should expect very good returns from the current price. This management will probably keep this company public until the original investors earn adequate returns on their money. That could take a while, but even if management misses on that long-term goal, current investors should earn a good return. This is one of the more experienced small company managers in the industry. At current prices, this stock should earn an above-average return for the foreseeable future under a wide variety of oil price assumptions. An average 20% annual return from current levels would be conservative for this management given its history.

The enterprise value is about $600 million when including the debt. That will probably be about 3 times the annualized 4th quarter cash flow from operating activities before the changes in other accounts are considered. This stock could easily double from a low level like that as management grows the company. Further price appreciation in the future from continuing growth would be inevitable.

I analyze oil and gas companies like Earthstone Energy and related companies in my service, Oil & Gas Value Research, where I look for undervalued names in the oil and gas space. I break down everything you need to know about these companies - the balance sheet, competitive position and development prospects. This article is an example of what I do. But for Oil & Gas Value Research members, they get it first and they get analysis on some companies that is not published on the free site. Interested? Sign up here for a free two-week trial.

Long Player
16.97K Followers
Author of Oil & Gas Value Research
Get analysis on under followed Oil & Gas companies with an edge.
I am a high school teacher for a decade. Before that I was an analyst (operations and financial) and for a short time a Controller I have a B.S. with an emphasis in Accounting and an MBA (for which I studied Finance, Economics, and Management) I passed the CPA exam on the first try and am a retired CPA in the state of Maryland. I have a high school teaching credential and an MA in Math Education

Disclosure: I am/we are long ESTE. I wrote this article myself, and it expresses my own opinions. I am not receiving compensation for it (other than from Seeking Alpha). I have no business relationship with any company whose stock is mentioned in this article.

Additional disclosure: Disclaimer: I am not an investment advisor and this is not a recommendation to buy or sell a security. Investors are recommended to read all of the company's filings and press releases as well as do their own research to determine if the company fits their own investment objectives and risk portfolios.