This article first appeared on Trend Investing on June 3, 2019; therefore all data is as of this date.

With the US-China trade war deteriorating it is becoming increasingly likely that China may ban exports of rare earths to the USA. This would lead to a scramble by the US to source non-Chinese rare earth sources.

The US imports 78% of their rare earths from China 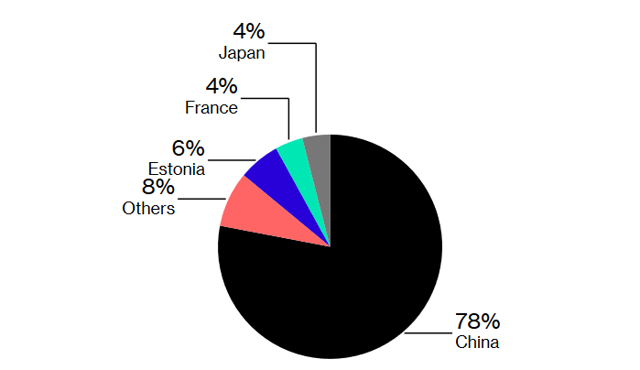 The (US) department continues to work closely with the President, congress and the industrial base to mitigate U.S. reliance on China for rare earth minerals,” Lieutenant Colonel Mike Andrews, a spokesman, told Reuters.

This article focuses to update investors on the non-Chinese rare earth miners, which are likely to benefit from increased US buying or investment.

For some background you can read my past articles on rare earths:

Note: I have used some of the charts from the above article again to re-emphasize the demand surge expected for the 'magnet rare earths' neodymium[Nd] and praseodymium [Pr]. Dysprosium [Dy] is also sometimes used to make permanent magnets. 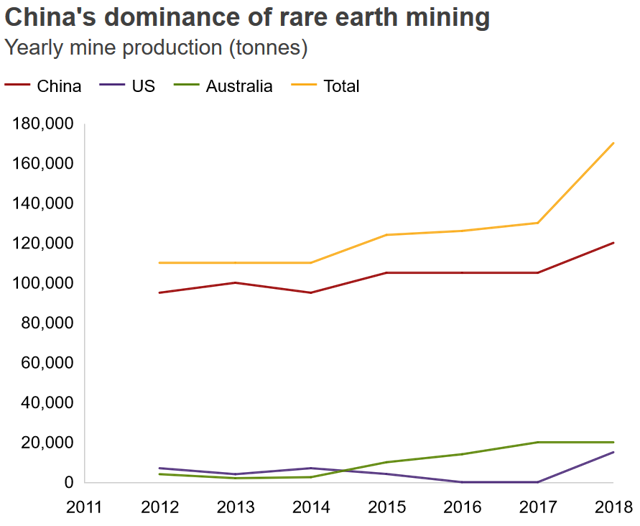 Source: BBC.com and US Geological Survey

Key industries that rely on the rare earths 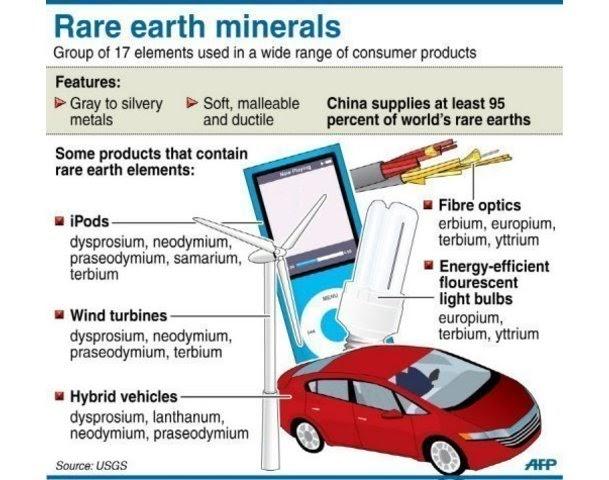 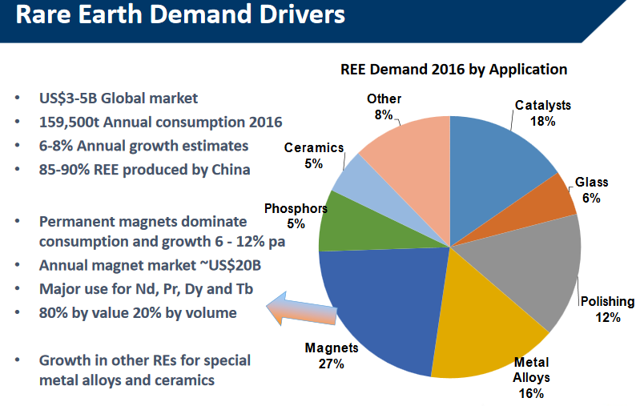 Certainly the two key rare earths used for permanent magnets in EV motors are neodymium (Nd) and praseodymium (Pr). Even despite the trade war threatening supply, these two key 'magnet rare earths' will see surging demand from the EV boom. In fact, in a 100% EV world demand for the magnet rare earths is forecast by UBS to increase by 655%. 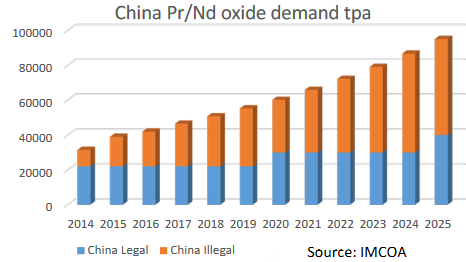 The rare earth miners that may benefit from a China export ban to the US, or from surging EV demand.

Lynas owns the Mount Weld rare earths mine (the Mt. Weld concentration plant, and the Malaysian advanced materials plant), which is currently in production. The company states - "The Company’s resource deposit in Mt Weld, Western Australia, is acknowledged as the highest grade rare earths mine in the world. The ore reserves are sufficient to sustain economic total production of 22ktpa REO for 25 years."

They also state "they are the only miner and processor of rare earths outside of China, and the 2nd largest global producer of rare earths." Lynas is leveraged to rare earth prices (particularly neodymium, praseodymium, and cerium). Note cerium is used in catalytic converters.

On the negative side there has been some environmental challenges with their Malaysian plant that still need resolving, with negotiations with the Malaysian government ongoing. On the positive side Malaysian Prime Minister very recently stated:

We will allow Lynas to carry on because otherwise we are going to lose a very big investment from Australia", Mahathir told reporters at a news conference in Tokyo.

MP Materials owns and operates Mountain Pass, the only rare earth mining and processing site in North America, and once the biggest in the world. The mine was re-started in January 2018 and was previously acquired from Molycorp who became bankrupt.

A key issue with MP Materials is that they export 36-48,000 tonnes pa of rare earth ore concentrate 'to China'. This ore contains the valuable rare earths cerium, lanthanum, neodymium and europium. This means they can suffer from Chinese tariffs.

The Company does plan to ultimately process rare earths in the US for use in electric vehicles, wind turbines and other clean-energy sectors by late 2020 or 2021.

Bloomberg: The Californian Rare Earths Mine Caught Between Trump and China

Alkane Resources Ltd. is an Australian multi-commodity mining and exploration company with a focus on gold, copper, zirconium, hafnium, niobium and heavy rare earth elements. Australian Strategic Materials Ltd. [ASM] is their rare earths subsidiary. Their 100% owned rare earths project (The Dubbo Project) is located at Dubbo in the Central West of New South Wales [NSW], Australia. The Project is currently at the financing stage and also seeking off-take partners. The Company has proposed a two stage production start-up so as to lessen the first stage CapEx from an estimated US$930M to US$480M.

Alkane also own the Tomingley Gold Project in central NSW (covering a massive 440km2) which is forecast to produce 42,000 to 47,000 ounces of gold in 2019 at an AISC of A$950 to A$1,100 per ounce. They are actively exploring to extend the mine life. The Company did recently state: "Broad, shallow high grade gold intercepts 3 to 4 kilometres south of Tomingley Gold Operations demonstrate potential for material project life extension and flag potential return to open pit mining."

The current market cap for Alkane Resources is AUD 164m (no debt), and a 2019 forecast P/E is 21.6. Of interest, cash, bullion and listed investments position totaled A$78.8M, and last quarters gold production was 10,669 gold ounces.

Investors can read the most recent quarterly activities report here.

Arafura Resources 100% owns the Nolans rare earth project 135kms from Alice Springs in the Northern Territory of Australia. The Company states that "the Nolans project contains one of the world’s largest neodymium and praseodymium deposits."

The deposit contains a JORC 2012-compliant Mineral Resources of 56 million tonnes at an average grade of 2.6% total rare earth oxides (TREO). 26.4% of the mix is represented by NdPr.

Environmental approval is complete, and off-take agreements are currently being pursued as shown below. 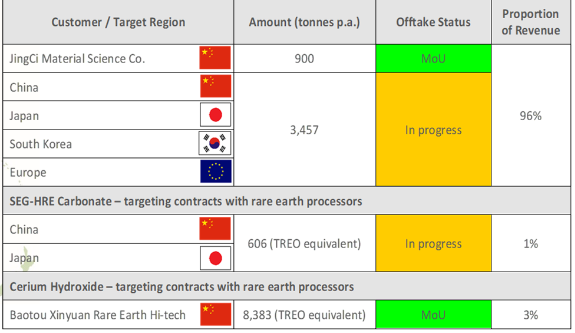 Arafura also hold a 60% interest in the Bonya Project also in the Northern Territory, with exploration potential for tungsten and copper.

Northern Minerals owns the Browns Range Heavy Rare Earths Project in northern Western Australia. The Project has been in process for 10 years with A$200m spent and is currently producing rare earth concentrate from the pilot plant.

On March 6 2019 the Company announced a maiden Mineral Resource estimate for the high-grade Dazzler deposit at the Browns Range Heavy Rare Earth Project. The maiden Inferred Mineral Resource was estimated at 144,000 tonnes at 2.23% TREO comprising 3,200,000kg TREO using a cut-off grade of 0.15% TREO. This compares to the overall TREO grade for Browns Range of 0.66%TREO.

The Company state: "Northern Minerals is the first and only meaningful producer of dysprosium outside of China."

The graph shows their majority rare earth is Yttrium, which is mostly used in LEDs and phosphors. 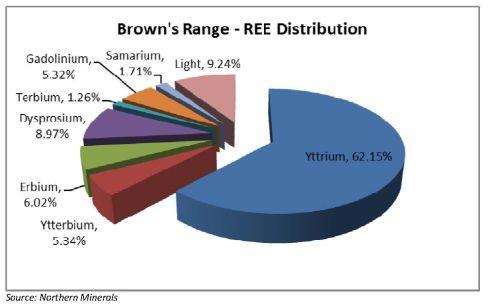 Peak Resources 75% owns their Ngualla Tanzania Rare Earth Project, which is one of the world's highest grade rare earth projects, currently at the funding stage having completed their BFS. The company expects once in production that 90% of their revenues will be coming from NdPr, as they have developed a process to remove the less valuable rare earths such as cerium.

The Ngualla project has ore reserves of 18.5 million tonnes at 4.8% REO; 22% of the total mineral resource, with an expected 26-year life of mine.

The Company states: "Peak to become one of the world’s lowest cost rare earth producers based on the delivered BFS results."

The Company is currently awaiting their mining license approval with their application currently being assessed by the Tanzanian government. Peak state:

The Company received notice in October 2018 that the Mining Commission had recommended the SML application for approval...... Both the Minister and Commission reiterated their full support for the Project and for the Company.

CEO, Rocky Smith commented “Discussions are well advanced with quality potential offtake partners with a number of confidential Memorandums of Understanding and Term Sheets under negotiation. On receipt of the SML, Peak looks forward to progressing these discussions to binding agreements on terms which will underpin the Company’s ability to secure project development financing.”

The Company also has tenements in the Ray Mountains region of Alaska, with exploration potential for REE, Sn, W, Zr, Nb.

Ucore has acquired a technology to process rare earths and other metals (lithium, cobalt etc.) at a cost-competitive basis. The potential exists also for recycling from scrap materials or tailings.

Rare Element Resources 100% owns the Bear Lodge Project in Wyoming USA, which has key critical rare earths, as well as an estimated 40+ year mine life. The company states they have "unique and proprietary RE recovery/processing technology."

The latest news from the Company came on February 12 2019 when the company announced: "Rare Element Resources reports successful confirmation and enhancement of its proprietary separation technology."

Market cap is USD 38m. I was not able to find a recent investor presentation.

The US-China trade war appears to be morphing into a tech war. A key driver of that tech is the rare earth elements. What we may see next if China bans rare earth exports to the US is a rare earths shock to supply, which has the potential to disrupt part of the US high tech sector. Should this occur non- Chinese rare earth producers can be big winners, and near term producers may see a new found support to rush them into production.

Investors need to remember the past week or two has seen a significant rally in the sector in anticipation of a China ban. This may mean we get a lot of short term volatility in the sector, and some pull back of prices should no China ban occur. Despite this investing in the quality rare earth miners is a good long term strategy, as rare earth demand is set to outstrip supply, especially for the magnet rare earths NdPr.

For now my top stock pick for the sector continues to be Lynas Corporation due to their non-Chinese dominant producer status. In the juniors I like Alkane Resources, Arafura Resources, and Peak Resources; but would prefer to wait for a price pull back to buy, given the recent rare earths hype has pushed prices higher.

Disclosure: I am/we are long LYNAS CORPORATION [ASX:LYC]. I wrote this article myself, and it expresses my own opinions. I am not receiving compensation for it (other than from Seeking Alpha). I have no business relationship with any company whose stock is mentioned in this article.