Encana (ECA) halted drilling operations due to a 3.2 magnitude earthquake in Kingfisher County, Oklahoma recently, according to news reports. This was followed early the next morning by a 3.9 magnitude earthquake, which "was observed near the well while the work was still halted." This was "the strongest seismologists have ever observed related to well completion work in Oklahoma", if it was caused by the offsetting Encana well completion.

Encana stock is down recently, possibly because of the news reports of the earthquake. Note the matching performance for most of the past month and then the divergence in performance versus the index (XOP) as the news came out July 25th:

Encana is a multi billion dollar company, with assets beyond Oklahoma, in places such as British Columbia, Alberta, West Texas, North Dakota and Utah. However, Kingfisher county is one of three identified "core" areas for Encana, and earthquakes potentially caused by completion operations have had substantial negative effects on the shares of companies. 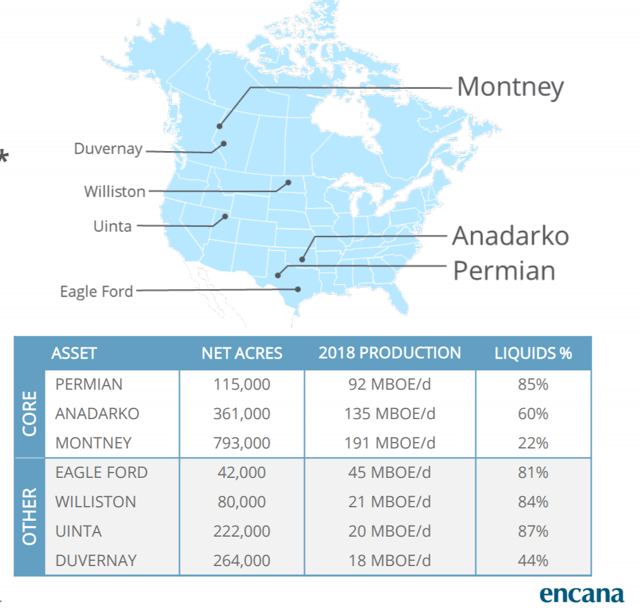 Obviously this should be concerning for Encana shareholders. Encana may be less affected, as it has production across 3 core areas and other non core areas, while Roan was focused on development in Grady county. However, some of the same effects may impact Encana, including development schedules thrown off, working capital and liquidity balances potentially disturbed, and additional risk to operating in a seismically active area that could be responsive to the particular completion design being used.

Encana may be particularly sensitive to these effects, because of a more than $1 billion share repurchase prior to the earthquake and because of the trajectory of aggressive growth in the "Anadarko" area where the earthquake happened. The faster the growth plan, the more potential for negative working capital and rig and pressure pumping commitments that could be disrupted by large scale seismic events of the sort encountered. 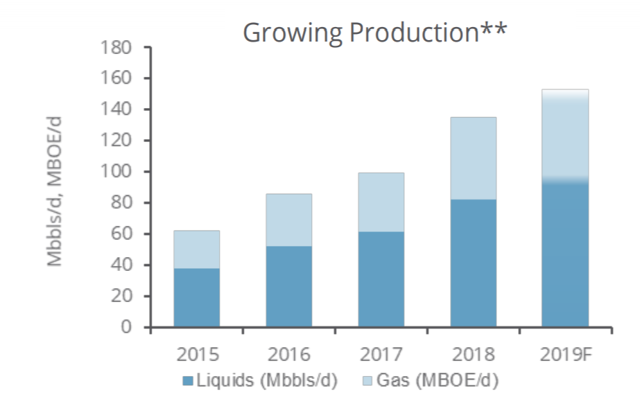 When observing a production growth chart like the above, it is important to keep in mind the high decline rate of the base production. This means that, while production might only be growing 10-20%, growing by that much may require replacing 50% or more of the prior year's production just to stay flat before achieving any growth. This increases the sensitivity to an unplanned activity disruption like an earthquake, and could make delays to study seismicity and completion design particularly impactful.

One further consideration for Encana is the accounting for the multi-billion dollar purchase of Newfield Exploration last year, which involved assuming over $2 billion of debt and issuing 36.5% of the pro-forma Encana stock to Newfield shareholders. From a news report at the time of the deal, "Newfield's prime operating area is about 360,000 net acres in Oklahoma's oil-rick SCOOP and STACK shale plays."

If the trajectory of Anadarko basin growth is affected by the earthquake and related disrupted operations, Encana might have to write down some of the value of the assets from the Newfield acquisition. Such a write down could further negatively impact the value of the stock. And with the attention of the Wall Street Journal on reserve reporting issues at Encana in another of their "core" areas and disappointing production results from too-tight spacing, write downs could draw extra attention in the equity and credit markets.

One further consideration is the lack of disclosure by the companies. Both Roan and Encana did not press release or file an 8-k with the SEC disclosing the earthquakes, despite magnitudes of 3.0 or greater. An investor carefully watching filings but not paying attention to local news regarding these companies could have missed these important events. There is a risk that such lack of disclosure of events that seem to have had a noticeable affect on their share prices and may have substantially affected their operations, working capital, etc could open up the companies to action by shareholders and regulators.

Ultimately, the earthquakes seem to have already started to drag Encana's stock to under-perform the index, despite no disclosure by the company. And a similar situation seems to have sent Roan in a tailspin, down more than 90% since the earthquake it may have caused in November 2018. There could be further substantial downdraft in Encana's stock price for some of the same reasons and because of the post-merger accounting, despite its larger size and diversification. And the lack of disclosure regarding the earthquakes by the companies is concerning.

Josh Young
7.04K Followers
Josh Young is the Chief Investment Officer of Bison Interests, an investment firm focused on publicly traded oil and gas companies. And he is the former Chairman of the Board of Iron Bridge Resources, which sold to Warburg Pincus and CPPIB backed Velvet Energy in 2018 for $142 million. He is a value investor primarily focused on energy stocks, natural resources stocks, and companies trading at low multiples to earnings, cash flow, or book value. He has presented at numerous investment conferences, including Platts, LD Micro, Oil & Gas Money, Louisiana Energy Conference, and the Global Resources Investment Conference and has been featured in media including Barrons, Bloomberg, Business Insider, Fox Business News, RT and Oil & Gas Investor Magazine. He is a graduate with honors from the University of Chicago in economics.

Additional disclosure: Opinions expressed herein by the author are not an investment recommendation and are not meant to be relied upon in investment decisions. The author is not acting in an investment adviser capacity. This is not an investment research report. The author's opinions expressed herein address only select aspects of potential investment in securities of the companies mentioned and cannot be a substitute for comprehensive investment analysis. Any analysis presented herein is illustrative in nature, limited in scope, based on an incomplete set of information, and has limitations to its accuracy. The author recommends that potential and existing investors conduct thorough investment research of their own, including detailed review of the companies' SEC filings, and consult a qualified investment adviser. The information upon which this material is based was obtained from sources believed to be reliable but has not been independently verified. Therefore, the author cannot guarantee its accuracy. Any opinions or estimates constitute the author's best judgment as of the date of publication and are subject to change without notice.