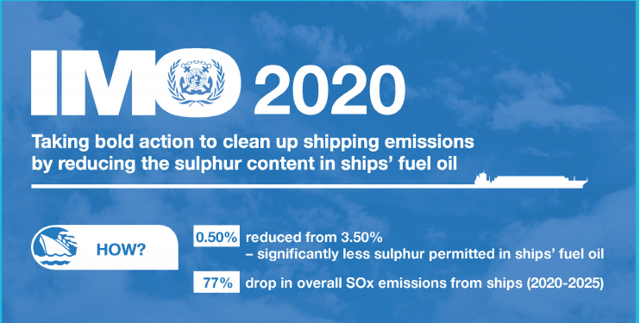 From January 1, 2020, the International Maritime Organization (IMO) will limit the sulfur in fuel oil used on board ships operating outside designated emission control areas to 0.50% m/m (mass by mass), from 3.50% m/m. Of total global air emissions, shipping accounts for 9 percent of the sulfur oxides. 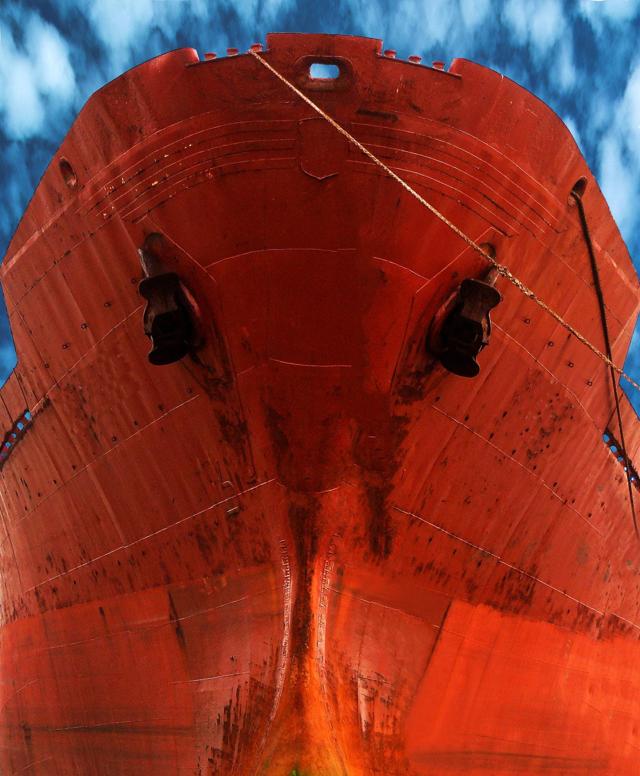 The IMO 2020 goes into effect January 1, 2020. However, shipping lines cannot wait until that date to become compliant. The change-over from one fuel type to another is complicated, and the IMO has prepared guidance for creating a Ship Implementation Plan (SIP). It's not just a matter of pulling up to a pump on New Year's Eve to load up compliant fuel.

The IMO recommends that the SIP cover the following areas:

Tank cleaning and potential inconsistencies in low sulfur bunker fuel blends necessitated the changeover process to begin in 2019. And so refiners will begin realizing the benefits of IMO 2020 in the third and fourth quarters of 2019.

The second item, tank cleaning, could take six months or more. The 3.5% bunker fuel that ships typically use tends to stick to the sides of fuel tanks and pipelines forming layers of sludge and sediments.

The layers of sludge may contaminate the compliant fuel, rendering its sulfur level above the 0.5% requirement. The storage system must be completely cleaned out, either manually or with chemical additives.

The tanks and system can be cleaned manually in dry-docking. Compliant fuels can then be loaded and the fuel can be expected to be complaint right away.

The cleaning can be done while the ship is in service. The time required depends on how many crew work on it. The residue has to be retained on board to be disposed of in shore reception facilities.

Or chemical additives can be used to clean the tanks and system over a few bunker cycles. This could take months before compliant fuel could be added. For example, Hoegh Autoliners began cleaning its vessels' bunker tanks in preparation for the switch to low sulfur fuels eight months ahead of the IMO 2020 start date.

Optimal marine engine operation depends not only on sulfur content but also on secondary fuel characteristics, such as viscosity and stability, and the co-mingling of fuels from different providers on vessels is inevitable.

Refiners and regional marketers have begun to offer new blends that meet the IMO’s requirements, but there are no standards. Potentially critical inconsistencies may emerge among fuels produced by different suppliers.

This is another reason why some shipping companies have indicated that they plan to comply with the mandate as early as the beginning of the fourth quarter in 2019.

Some shipping companies might opt for marine diesel, an established fuel that poses no compatibility risk, for their fuel needs. But this will be the most expensive option among the oil-derived products.

Joseph Gorder, Chairman, CEO & President, said the company expected all along to see the effects begin in “late third to fourth quarter of this year… and we expect positive market impacts from the IMO 2020 implementation as bunker fuel terminals transition to lower-sulfur fuel oil.”

The transition in marine fuels to IMO 2020 has already begun. Complex refiners, such as VLO, will start realizing the benefits of selling the more expensive products in their earnings in the third and fourth quarters of 2019 before the full effect is realized in 1Q of 2020.

I am now accepting new members to Boslego Risk Services and invite you to sign up. There are monthly and annual pricing options as described here. You may also read reviews posted by members here.

Disclosure: I/we have no positions in any stocks mentioned, but may initiate a long position in VLO over the next 72 hours. I wrote this article myself, and it expresses my own opinions. I am not receiving compensation for it (other than from Seeking Alpha). I have no business relationship with any company whose stock is mentioned in this article.