There are essentially two factors currently weighing on global economic growth at the moment. There is the secular narrative, and this has been a headwind for growth for some time, and there is the relatively recent political headwind that is unlikely to change course anytime soon. 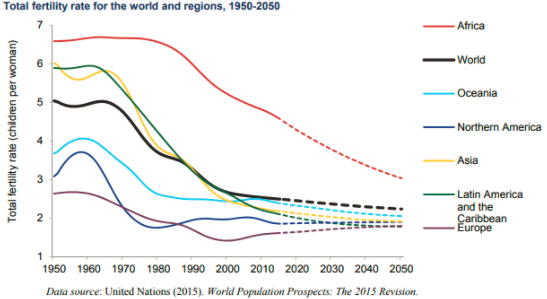 The number of people worldwide aged 60 years or over is expected increase to 2 billion by 2050, outnumbering the number of children (0-14 years) for the first time in human history. Rapidly aging populations result in shrinking labor force growth rates, which is a headwind to economic growth. 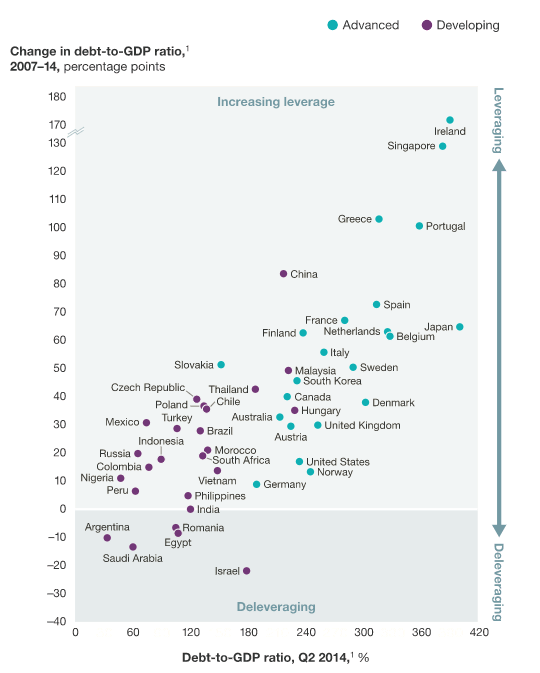 Global debt to GDP levels were at elevated levels back in 2007 and a decade of monetary easing since then has resulted in significant increases in leverage ratios in the vast majority of countries, which also serves as a headwind for future economic growth.

Populism and Barriers to Trade

The U.S. has been escalating tariffs against China with the intention of driving Chinese reforms around intellectual property theft and the state subsidization of private enterprise. This has had a significant impact on supply chains linking the U.S. and China, and in our interconnected global economy, has also had impacts far beyond the borders of the U.S. and China: 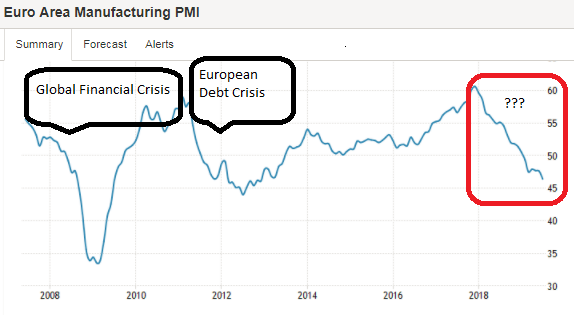 European Manufacturing is flashing red (readings <50 imply contraction) and we're seeing a similar downwards in the manufacturing PMIs of the U.S. and China since the beginning of 2018 as well. With producer sentiment in free-fall in response to rising trade tensions, the question becomes how close are we to a resolution of the current trade disputes, such that manufacturing sentiment can recover. Given how far apart the two sides are on many of the major sticking points around a potential trade deal, it would seem we are far off:

This is where we are after over a year of negotiating and round after round of tariffs. All of this has not led to anything close to a consensus on these key issues. The two sides are entrenched in their original positions and the goodwill between U.S. and Chinese leadership is eroding. The Chinese leadership is also unlikely to give the most hostile U.S. leadership its faced in recent history a big win before the 2020 elections, which makes it all the more difficult to see a path to a meaningful resolution in the near term.

We're in a position where we have both secular trends and current events both acting as headwinds for economic growth. This dynamic had a sharp, and relatively sudden effect on economic growth in the second quarter. U.S. annualized GDP growth fell from 3.2% in Q1 2019 to 2.1% in Q2 2019. If we use history as a guide, sharp drop-offs in quarterly economic growth are often followed by subsequent quarters of anemic growth:

Going back to 1962, we have experienced 23 cases of a comparable drop-off in economic growth. In 21 of 23 of these instances, the 2 quarters following the drop-off in growth had lower growth rates than the two quarters leading up to the drop-off in growth, with an average decline of 2.7%. There are several potential explanations for this: economic imbalances take time to correct themselves, central bank responses to economic slowdowns are often delayed and take time to have an effect, and there's also the behavioral element of businesses and consumers cutting investment/spending in response to headlines around slowing growth. Whatever the case may be, this trend does not bode well for economic growth in Q3 and Q4 of 2019, given the drop off experienced in the second quarter.

"If past history was all there was to the game, the richest people would be librarians." - Warren Buffett

Just because historical drop-offs in short-term growth have often preceded longer term slowdowns, there's no reason to believe that this has to be what happens over the next two quarters. However, there are very real economic imbalances that exist around the world, and these point to a prolonged slowdown being a highly likely scenario. Any period of time that has significant increases in debt ratios, such as the past decade, is likely to involve some areas of malinvestment. In the current environment, there's a few that are quite significant: 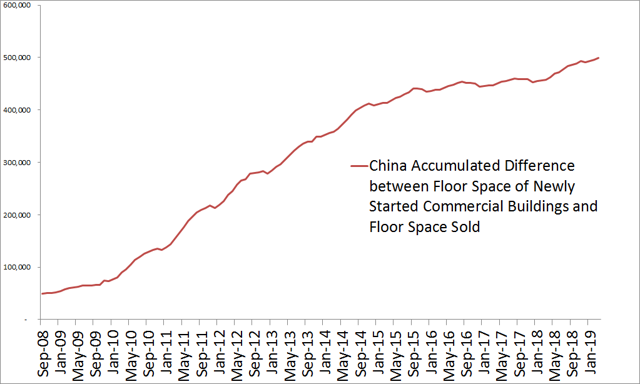 Furthermore, marginal property development is becoming all the more unproductive as much of the new inventory coming to the market is being left unoccupied and is nothing more than a object for speculation, in a region with few alternatives for capital investment: 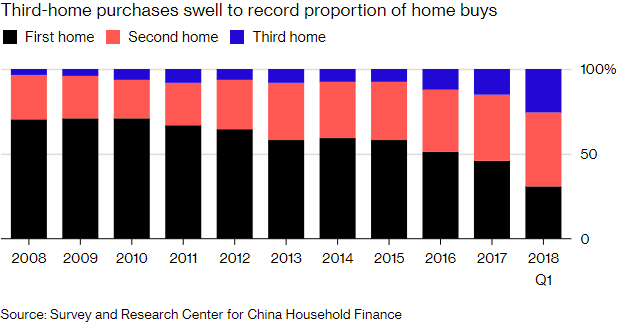 Floor space of real estate sold in China has been a great leading indicator for the direction of industrial growth and commodity prices globally over the past decade, due to the size and significance of the Chinese property market. This metric has began to turn negative recently due to trade war pessimism and government controls around property speculation, both of which are unlikely to subside in the near term:

This does not bode well for commodity prices and industrial growth in the near term.

With Japan and much of Europe already holding interest rates around 0 in response to anemic growth over the past decade, there is limited firepower left in the monetary toolbox to get these economies out of the funk they've been in. Europe's largest banks are trading significantly below book value, at multiyear lows, which shows what the market thinks about the health and viability of these banks in a zero interest rate environment. With no hurdle rate to investment, the quality of lending inevitably deteriorates. That should intuitively make sense, but if it doesn't, Deutsche's equity looks extremely attractive at 23 cents on the dollar of its balance sheet book value. This is not how banks are valued in a balanced economic environment: 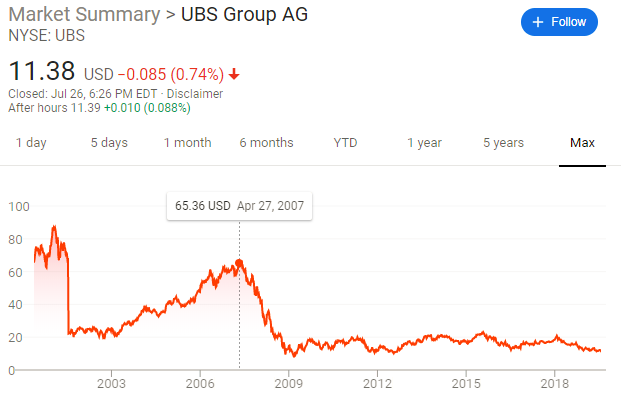 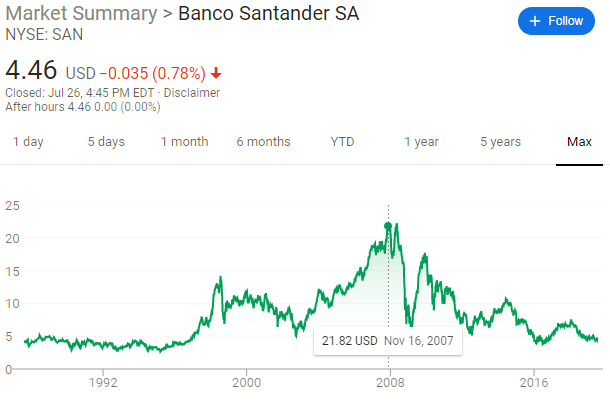 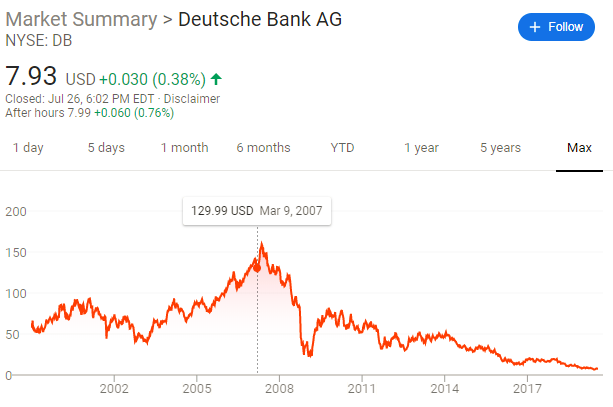 Global growth experienced a significant slowdown in the second quarter and historical parallels point to slower growth ahead. Globally, business sentiment and corporate profits are down year over year. This is not the result of a shortage of low cost financing options, but rather, rising trade tensions and economic imbalances that have built up over an extended period of time. This dynamic makes any marginal monetary easing less effective in stimulating growth, and as a result, investors should be prepared for a longer term slowdown. Treasuries will likely continue to perform well in this low growth, low inflation environment that we're stuck in for the time being, and with the slowdown impacting the commodity-intensive Chinese property sector, industrial metals will likely continue to under perform.

China Enthusiast
205 Followers
I am passionate about macroeconomics and financial markets. I focus on economic growth and inflation, and my view of those two variables drives my investment strategy.