Rotation in the stock market isn't new investors have been switching from sector to another since the markets were formed. The S&P 500 has been in the ascendancy for approximately ten years and is due for a correction. The question for those involved is where to go next and there are many opportunities available to them. To name just a few there is land, property, art, antiques, autos, jewelry, gold and silver, etc. Some of these alternative investments are already considered to be in a bubble apart from gold and silver which is a sector that has taken a beaten over the last few years.

This article will try to compare the two in terms of their pros and cons.

The S&P 500 has done really well, corrected and bounced back to achieve an all time high. It also has momentum behind it which could carry it to higher ground. The central banks have turned away from tighter monetary policy in favor of a more accommodative stance.

Mario Draghi head of the European Central Bank has indicated that there will be a new package of monetary stimulus to boost the flagging Eurozone economy. This package will consist of rate cuts and of asset purchases before he retires from his post in October 2019. The Federal Reserve will almost certainly announce a rate cut when they meet on the 30th and 31st July with the possibility of two more rate cuts before the end of the year.

More money in the system available at a cheaper rate will provide investors with the funds required to make further investments. Some will continue to invest in the S&P 500 as it is more of the same and is familiar to them. Others will be looking to diversify as they don't want all their eggs in one basket.

The S&P 500 could make gains from here given the new stimuli, however, once capital starts to flow out of the market the herd mentality will take over and the move to the exit in order to lock in profits could be dramatic.

The SPX has set a new record, but a long overdue correction is a threat to any further progress.

The technical indicators are still in the overbought zone but appear to be rolling over as this rally runs out of steam. 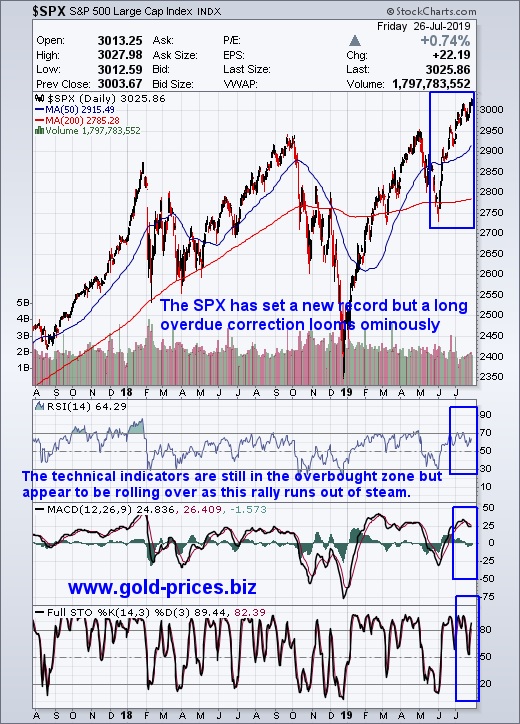 Gold, silver and their associated stocks represent a tiny portion of the investment space, so it won't take a lot of new capital to give it a real boost.

When central bankers cut interest rates it makes holding actual cash less attractive as the returns are miserly. As investors dispose of paper currency it becomes less valuable as the number of sellers increases this in turn reduces the value of those currencies.

Despite modern technology there are no big discoveries of gold or silver so it is becoming increasingly difficult to see where the supply will come from as the demand picks up. However, modern technology has brought us the Internet and communications worldwide can made at great speed. Investment or speculation is no longer the preserve of the few, trades can be executed by a multitude of people at the very same time increasing the rapidity of price action. The audience for the preservation of wealth has never been greater and when they recognize that gold and silver have entered a new Bull Market this tiny sector of the market will sprint to higher ground at a speed never seen before.

A Two-year chart of Gold

The technical indicators are overbought, and a pullback was to be expected. Gold has rallied on increased volume and is set to go much higher with numerous corrections along the way. 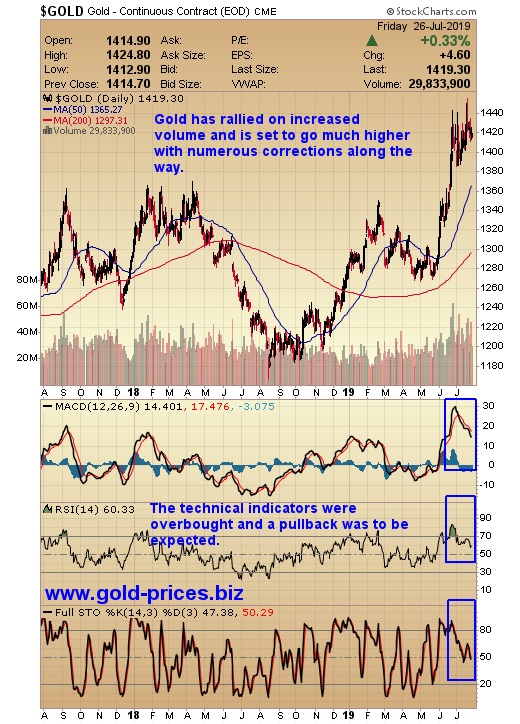 The S&P 500 will correct causing investment funds to seek another home and the precious metals space will attract enough of those funds to sustain the rally for the next few years.

The new stimuli administered by the central bankers will have an impact in the short term only. The bankers are more or less out of gun powder and may revert to more Quantitative Easing, if that happens then gold will make new all-time highs.

If you have not acquired any physical gold or silver, then do so as soon as you can.

Good quality stocks will do well but they appear to fairly priced so you may have to look hard at the small caps in order to identify a real mover.

Options trading could change your life, for better or worse as they say, but they are not for those of a nervous disposition.

Your comments are very much appreciated as they do help to add some semblance of balance when debating a market sector which is in a state of flux.

If you are not already a Follower and wish to see our posts on gold, silver and the associated stocks, then please hit the follow button in order not to miss out.

Bob Kirtley
2.7K Followers
Bob Kirtley has traded options and stocks since 1980. Bob Kirtley spent many years working on Oil projects including some in Alberta, such as the tar sands installations in Fort McMurray. He lived and worked in many different countries, as that is the nature of the construction business. Planning and cost control are key to a projects success and he tries to apply those disciplines on a daily basis when dealing with investments. His training in such areas as SWOT and Risk analysis can be applied from time to time. His qualifications include being chartered in the United Kingdom, which is similar to that of a Professional Engineer in Canada, along with a Masters Degree in Project Management from South Bank University, London, England. He has been working for a number of years on a full time basis representing a group of investors in England.
Follow

Additional disclosure: Disclaimer: gold-prices.biz makes no guarantee or warranty on the accuracy or completeness of the data provided. Nothing contained herein is intended or shall be deemed to be investment advice, implied or otherwise. This letter represents our views and replicates trades that we are making but nothing more than that. Always consult your registered adviser to assist you with your investments. We accept no liability for any loss arising from the use of the data contained on this letter. Options contain a high level of risk that may result in the loss of part or all invested capital and therefore are suitable for experienced and professional investors and traders only. Past performance is neither a guide nor guarantee of future success.