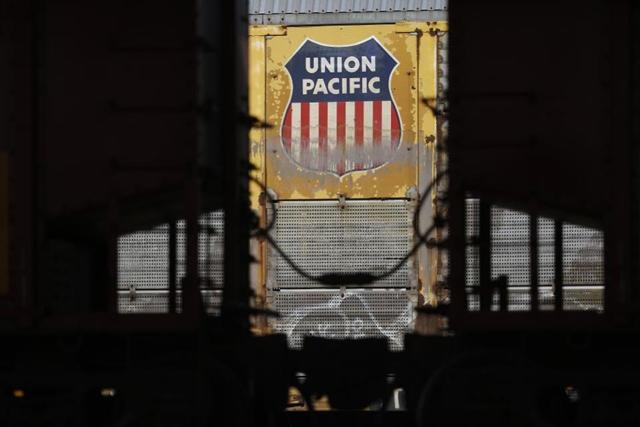 U.S. railroads are experiencing falling rail traffic, which implies a slowing economy. Union Pacific Corp. (NYSE:UNP) reported an earnings beat in Q2, but missed on revenue by $20 million. The stock is up 5% post earnings despite the revenue miss. I believe railroad stocks should rise and fall with the vagaries of the global economy. There is a lot of noise over the direction of the economy. Whenever it appears the economy has peaked, the government does something to obfuscate it. GOP tax cuts and the recent trade war with China have impacted rail traffic and the economy's vital signs. Now President Trump is lobbying the Federal Reserve for rate cuts to keep the economy moving.

For the week ending July 20th, total U.S. weekly rail traffic was down 4.9%. An end to the trade war could create a bump in rail traffic, yet it may not be sustainable. Union Pacific may not be immune to declining rail traffic, which is why I am bearish on the stock. Once rate cuts and potential fiscal stimulus dissipates, the stock could face headwinds. 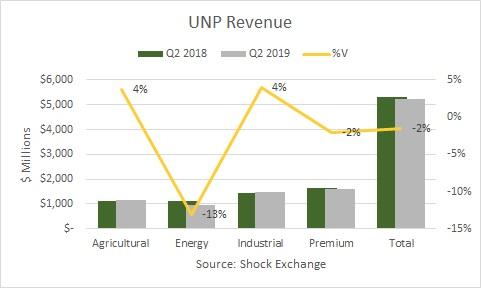 Agricultural revenue rose 4% on flat volume and a 4% increase in ASP. The segment also benefited from a positive mix. China has cut down on purchases of agricultural products amid the trade war. This could continue to create more headwinds for the segment. Energy fell by double digits on a 9% decrease in volume and a 4% decrease in ASP. Frac sand shipments declined heavily, while coke and coal shipments fell due to weather-related operational challenges. Falling oil prices and declining E&P in the oil patch could stymie Energy for the foreseeable future. Industrial was aided by a strong market for products and plastics, while Premium revenue was hurt by truck competition weather-related operational issues.

The following chart illustrates Union Pacific's rail traffic during the quarter. Total carloads fell 4% Y/Y. The decline in carloads appears to be consistent with the decline in industry rail traffic. The Premium segment represented 49% of total carloads, and it saw the biggest decline. Carloads for the Agricultural and Industrial segments did not decline. However, if the trade war continues, they could face headwinds. I believe Agricultural is particularly vulnerable as China seeks alternative sources for Agricultural products. 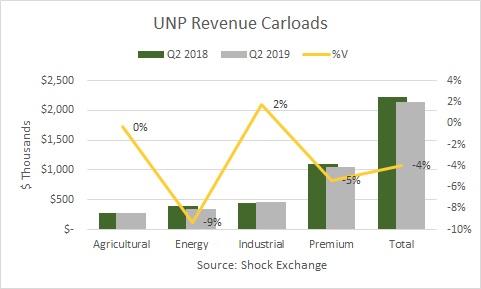 Union Pacific slightly offset the decline in carloads by raising prices. ASP rose 3%. The company raised prices for four of its five operating segments; Energy experienced a 4% decline in ASP. 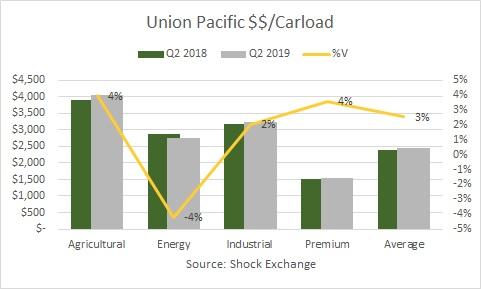 The question remains, "How long will Union Pacific be able to pass through price hikes to its customers?" If prices rise high enough, the company could become vulnerable to trucking competition, which could create more headwinds for rail traffic.

To grow earnings amid a stagnant top line, the company must become more efficient. CSX Corp. (CSX) has led the charge for efficiency gains for U.S. railroads, and Union Pacific has followed suit. The company lowered its operating ratio to 60%, down 300 basis points versus the year-earlier period. An operating ratio this low puts Union Pacific in the same company as CSX and the Canadian railroads in terms of efficiency.

Total operating expenses of $3.3 billion fell 7%, far more than declines in revenue. The biggest expense was compensation and benefits, which Union Pacific cut by 8%:

Compensation and benefits expense decreased 8% to $1.1 billion versus 2018. The decrease was primarily driven by a reduction in total force levels, which were down 8% or about 3,500 FTEs in the second quarter versus last year. Productivity initiatives along with lower volumes resulted in a 5% decrease in our TE&Y workforce, while our management engineering and mechanical workforces together declined 11%.

The reduction in headcount could continue for a few more quarters. Purchased services expense fell 9% as the company reduced mechanical repair costs. Fuel costs fell 13% on lower fuel prices and less fuel consumed. As a result, EBITDA rose 6% to $2.8 billion. The EBITDA margin of 50% was up 300 basis points versus the year-earlier period.

Operating costs of $3 billion or more gives management several levers to pull. The company could gradually cut operating costs to grow EBITDA. Cost take-outs could work as long as service levels do not suffer. This could energize bulls, despite stagnant top line growth.

With an enterprise value of $147 billion, UNP trades at around 14x run-rate EBITDA (first-half 2019 EBITDA annualized). The melt-up in financial markets have helped UNP, in my opinion. The market also rewards companies that can generate consistent earnings growth. Gradual cost take-outs could ensure more earnings growth each quarter. What are those earnings worth? A 14x EBITDA multiple for a company experiencing headwinds to its top line is too robust, in my opinion. The Federal Reserve will likely cut interest rates shortly. After rate cuts dissipate, the market could falter, causing UNP to pull back as well.

UNP is up over 15% Y/Y. However, the valuation appears stretched. Sell UNP.

Disclosure: I am/we are short UNP, CSX. I wrote this article myself, and it expresses my own opinions. I am not receiving compensation for it (other than from Seeking Alpha). I have no business relationship with any company whose stock is mentioned in this article.