Well, we told you less than two weeks ago that Smith Micro's (SMSI) shares (which we bought for the SHU portfolio last year) could blast off at any moment, and blast off they did: 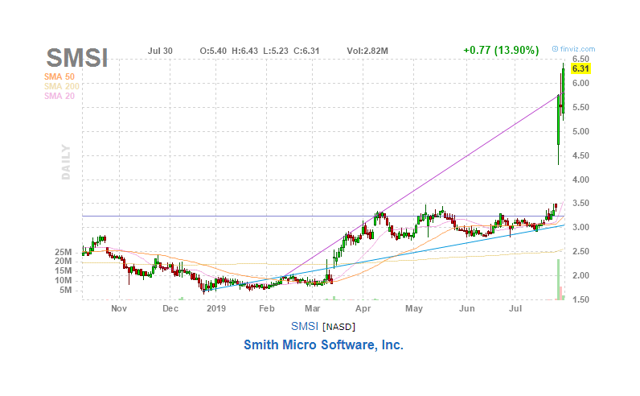 It is always good to see a rally supported by humongous volume, which indicates there are many new buyers (and quite a few traders as well, of course, to each his/her own).

What investors want to know is whether to stay the course. We think so, as we see numerous catalysts appearing near-term and longer-term, in no particular order:

Before we'll address these, let's give you the summary. What we see today is the acceleration of one revenue stream at one carrier, although that acceleration is nothing short of tremendous.

But what we think is eminently possible is that in the coming months and years, the company will have multiple accelerating revenue streams at multiple carriers.

But even if that falters, we still have the one acceleration at Sprint (and two other revenue streams which are coming online as we speak). So we think that limits the downside, while giving potentially enormous upside, which is why we remain extremely bullish on the shares.

Well, not beating around the bush, Q2 earnings came in far ahead what anyone expected:

Where does this come from? Well, it's fairly simple, Sprint (S) has started to seriously market SafePath (which is called Safe & Found under Sprint branding). That is really producing results, and we're putting that mildly.

Of course the growth rate will slow down at a certain point (management guides Q3 sequential growth at 30%), but it's important to keep in perspective that Sprint has 55M subscribers and the number of Safe & Found subscribers is still just a fraction of that, in the order of half a million or so.

So this party can go on for quite some time, and these revenues are recurring, and produce 90%+ gross margins. We would argue this alone is a sufficient perspective in support of the share rally.

With prospects like that one would almost forget that the company has two other products, and these are also growing, albeit not quite at the torrent pace of SafePath.

Their messaging solution CommSuite went from $5.2M in Q1 to $5.7M in Q2, which is nearly 10% sequential growth. Boost Mobile has deployed CommSuite, and now constitute 30% of their revenues.

The company is also keeps on expanding the capabilities of CommSuite (Q2CC):

We look to build on this growth through the remainder of the year with the roll out of several new product features and marketing initiatives. We are also enthused to attack the demand we see in the marketplace with other carriers.

ViewSpot, their in-store marketing solution which they acquired not so long ago is also growing, producing $1.4M revenues in Q2, up from $1.1M in Q1, and that looks set to continue (Q2CC):

One should appreciate the business model. Yes, selling white-label solutions to carriers tends to have a long sales cycle and can be frustrating. But once you're in the selling and marketing is up to the carriers and that can produce tremendous accelerations like we're witnessing at the moment with Sprint.

The company saves a lot on S&M, and Smith Micro has a long history with the carriers, which is why the developers of ViewSpot were happy to sell to them as Smith Micro is much more likely to open doors.

The rise in gross margin during the years reflects the shift at Smith Micro towards mobile and away from their legacy graphics business.

While our previous article was pretty well timed, it was also a little sloppy as we assumed that Boost Mobile was simply part of Sprint and we didn't treat it as a separate win. While technically correct (Boost is Sprint's pre-paid vehicle), it is a separate win and soon it might even be a separate company.

Sprint's merger with T-Mobile has finally been approved and one of the conditions is that they have to divest certain assets, one of which is Boost. This is supposed to be bought by Dish Network, helping that company to become a fourth carrier to maintain a competitive market.

Now, this opens up some interesting opportunities:

T-Mobile is actually bigger than Sprint. This is not a given and management stressed that, apart from opportunities the merger also poses a risk. The obvious risk is that they lose Sprint as a customer for one or all of their products.

Given the accelerating sales (especially of Safe & Found) and the specific marketing effort by Sprint to sell that solution in its shops, that doesn't strike us as a big risk, but it's a risk nevertheless. We're also not aware of T-Mobile having a better solution.

One also has to keep in mind that the T-Mobile-Sprint merger isn't entirely a done deal yet, it could still hit a snag as a number of state prosecutors are against the merger.

But there are more carriers in the world, and Smith Micro has decades of experience selling to them and is well known in the industry. The sales cycles might be long and frustrating, but the spectacular growth of SafePath at Sprint will be noted.

This is an industry which service is basically a commodity, anything they can sell additionally to produce recurring revenues is likely to be noticed (Q2CC):

I would say that that the carriers out there are watching with a great deal of interest and have sort of figured out that it's going pretty well at Sprint. That is also a positive thing for our sales efforts in for how we move this forward.

And it's not just SafePath, management revealed during the Q2CC that ViewSpot is undergoing trials at no less than 11 different carriers.

We also know that the company is hiring a lot of people, 18 in Q1 and there are quite a number of vacancies still. An unidentified analyst asked at the Q2CC whether that was in relation to the Sprint ramp or stuff that is in the pipeline. Here is how management answered:

Our previous article actually missed the launch of the company's first IoT solution, a tracker with Sprint. This is also producing recurring revenue (shared by Sprint and Smith Micro) and could even function as a gateway to sell more Safe & Found subscriptions (Q2CC):

I am very happy with the launch of our first SafePath IoT device, a tracker, powered by our SafePath platform as it both expands our market reach and further builds our vision to deliver the best connected life experience for the family.

Since Sprint subscribers could use more than one tracker, this could quickly add up. The company also argued on the Q2CC that they're working on multiple additional IoT products, so before you know it this could start to snowball.

Here is where it really gets interesting, from the Q2CC (our emphasis):

SafePath 6.0 creates a single payment glass to manage the family digital lifestyle, providing both family safety with parental controls, while integrating the management of connected devices whether those devices are mobile or within the home. This is a significant first in the marketplace that allows carriers to offer not only the power of SafePath family, but now includes connected devices under the same common application experience. This allows carriers to offer their subscribers the choice of either option. With these new features, we have more than a new upside sales opportunity. We also have a strong competitive advantage for our solution that clearly separates us from our competition.

Separating yourself from the competition is only one thing, becoming the gateway for the smart home is quite another. There are multiple tech companies with their platforms trying to become just that, but could tiny Smith Micro actually beat them to it?

Being already on people's mobile phone might give it a head start, but there is another avenue here (Q2CC, our emphasis):

As far as the SafePath home efforts, we are working together with our partner to expand that product offering and to meet I think what we now understand that may be more fully as some of the requirements that carriers will have to allow them to effectively deploy. I think the other thing that you'll see is that with all the major carriers now really focused on what it is they're going to do as far as the devices that they will put into the home, the types of servers that -- router, excuse me, that was the word I was looking for, routers, that they will then sell for home use allows us to focus in on how to best get the SafePath home firmware included in those devices before they go on to the marketplace.

This is of course far from a done deal, but the opportunity is really quite substantial and people might want to remember this from March (company PR):

Smith Micro Software, Inc. (NASDAQ: SMSI) (“Smith Micro” or the “Company”) today announced it has signed an exclusive strategic license agreement with Gryphon Online Safety, Inc., providing a software solution that offers simple, yet powerful integration of home routers, including future in-home 5G routers, with the SafePath® platform. Known as SafePath Home, this new capability continues the vision for SafePath, making it possible to add all in-home devices to the digital family lifestyle. Family life includes time inside and outside the home. SafePath provides a single pane of glass through which the family can manage and secure their digital lifestyle no matter where they happen to be.

So they are already preparing for a much bigger role, although that isn't any guarantee they will get it of course.

There are always risks involved, here are the main ones in our view:

Analyst expect an EPS of $0.25 this year rising to $0.34 next year, which gives the shares a forward earnings multiple of below 20 (at the point of writing with the stock at $6.31) which is still not expensive, despite the rally.

We think these estimates are too low, given the tremendous acceleration that is taking place. Add another carrier, or another product, or both and these will be blown away.

The company is engaged in 11 ViewSpot trials at different carriers, is developing multiple IoT product lines and the Sprint/T-Mobile merger gives them a shot at T-Mobile, given Sprint's weight behind SafePath. Before you know it this will add up, and add up seriously.

It's already doing that with just one accelerating revenue stream as it happens. That alone could carry the shares considerably higher still, given the fact that these are revenues with 90% gross margin producing recurring revenues for which the company doesn't have to engage in sales efforts, and has won just a fraction of Sprint's subscribers.

We remember an analyst who used to say about a company (InterOil) that it had an "open ended upside." These words seem particularly apt with respect to Smith Micro.

Disclosure: I am/we are long SMSI. I wrote this article myself, and it expresses my own opinions. I am not receiving compensation for it (other than from Seeking Alpha). I have no business relationship with any company whose stock is mentioned in this article.