This is an update to the February article on Tower Semiconductor (NASDAQ:TSEM). The thesis of the original article was that TSEM was going through a cyclical bottoming process. Growth was expected to resume in 2Q or 3Q. When growth resumes, incremental gross margin drop though could be as high as 50% to 60%, driving strong profitability growth. TSEM was still profitable and generating strong FCF at the trough. Valuation was compelling.

Two quarters have passed and the thesis continues to play out. Share price has appreciated from $16 to $20 since the original article was published. At $20 per share, the thesis is still very compelling given the industry tailwinds, company execution and the valuation. I will not repeat TSEM’s background, but will refer readers to the February article.

Most of TSEM's segments are trending up

In TSEM’s 2Q earnings CC, management provided revenue trends of the segments it serves. Table 1 is the summary of the trends I gleaned from the CC. 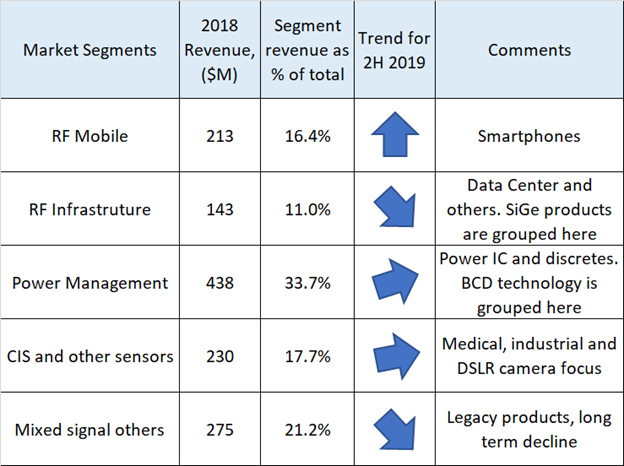 RFSOI for mobility application experienced “strong growth” in 1H as a result of design wins landed in 2017 and 2018. Growth guidance for Q3 is about 22% QoQ and represents the highest RFSOI revenue for the company. This business also has higher margin. Moreover, customer forecast exceeds the current capacity in the 300mm Uozu fab where this product is manufactured. This growth comes as a result of increased RF contents in mobility products as well as share gain.

The power management business is also seeing steady growth, and with many design projects in the pipeline. More notable is the high voltage BCD technology, where there are strong design and prototyping projects within Tier-1 customers. The BCD technology enables power devices to operate at 48V or higher for auto applications where the trend is to use higher voltages. The BCD technology is also implemented in the 300 mm Uozu line.

The CMOS image sensor (CIS) segment has experienced pullback due to uncertainties as a result of the trade disputes, but has seen recent pick-up in activities. More importantly, there is a strong design pipeline that will lead to revenue starting in late 2020 and into 2021 and 2022.

Hence, over two third of TSEM’s market segments are experiencing strong growth or are starting to grow again. The RF Infrastructure segment, however, continues to decline. Management reported that revenue declined from $44M in 1Q to $37M in 2Q and guided a decline to $32M in 3Q. There is no sign of pick-up in 4Q. Management attributes this to inventory rationalization in the data-center market as well as the recent US government ban against selling products to Huawei. Management believes that it may be 2020 before this segment will turn up.

Based on the mid-point of 3Q guidance, TSEM’s revenue will start to grow in 3Q on a YoY basis the first time in 2 years. This is shown in Figure 2. 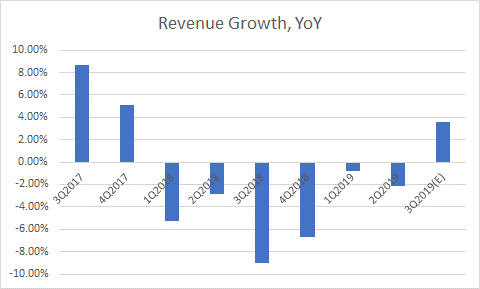 Figure 2: YoY revenue growth. Source: Company releases. Note: The 2Q2019 and 3Q2019 growth numbers have been adjusted to account for a $22M per quarter reduction in the Panasonic business resulting from a new Panasonic contract.

There is not another foundry company comparable to TSEM. However, Taiwan Semiconductor Manufacturing Company (TSM), the largest semiconductor foundry, is a good bellwether for TSEM. While the technologies are different, TSEM’s revenue profile mirrors that of TSM’s from the verticals standpoint: TSM’s smartphone vertical is at 45% of total 2Q2019 revenue, IoT (industrial) is at 8% and auto is at 5%. These are the markets that TSEM is exposed to (see Table 1). The YoY revenue growth trend for TSM is shown in Figure 2. Figure 2 shows that TSM’s revenue grew by a small 1.6% YoY in 2Q and TSM guided to a stronger 7% YoY growth for 3Q. TSM showed broad-based growth in mobility, IoT (industrial) and auto markets. Figure 2 definitely shows a declining trend since 4Q2017 that bottomed in 1Q2019. Growth resumed in 2Q2019 and TSM guided to accelerating growth into Q3. 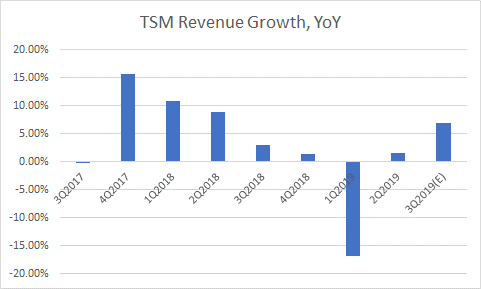 In addition, Texas Instruments (TXN), another industry bellwether, indicated that a typical semiconductor down cycle has four to five quarters of YoY revenue decline. If we look at Figures 1 and 2, we see that the downtrend has lasted about seven and five quarters, respectively.

TSEM accelerated its decision from 3Q to 2Q to invest in additional capacity. Management announced that they have decided to invest around $100M to add capacity in the Uozu 300mm fab that will produce between $70M to $100M of annual revenue. Equipment installation and qualification are planned to be completed by the end of 1H2020. Revenue generation will start in 2H2020. The capacity addition is targeted for RFSOI for smartphone, power management with BCD technology and CIS. The typical annual capex for TSEM has been running in the $170M to $180M range. As such, this $100M capex expansion represents a major commitment by management and shows confidence in the future growth of the company.

Prior to this expansion, TSEM’s capacity can generate about $1,600M of revenue per year. This investment will bump its revenue cap to around $1,670M to $1,700M, depending on product mix.

A revenue of $400M two years out is not that farfetched. TSEM’s revenue peaked at $358M in 4Q2017. With the industry growing again and with the new $100M investment generating between $70M to $100M of revenue, it is highly likely that revenue can exceed $400M within a year or two after the new capacity is commissioned. Where will the additional revenue come from? It will come from the RFSOI ramp, the BCD and CIS projects ramp, and the re-acceleration of the data-center SiGe business.

Most semiconductor companies work during the down cycle to improve their technologies and cost structure. This way, they can come out of the down cycle better positioned for growth. That is why the best time to invest in a semiconductor company is at or before its business’s cyclical bottom. Most investors know this and they tend to invest before the sign of a bottom is clearly evident. The period between November 2018 and January 2019 was an excellent time to buy TSEM. Now that the share price has increased from roughly $15 then to around $20 now, is it still attractive to invest?

I believe that TSEM's valuation is still compelling for two reasons. First, given my model analysis mentioned above where a baseline scenario leads to share price appreciation to the high $30 to low $40 two to three years out vs $20 today. If this scenario plays out, the ROI is rather attractive. 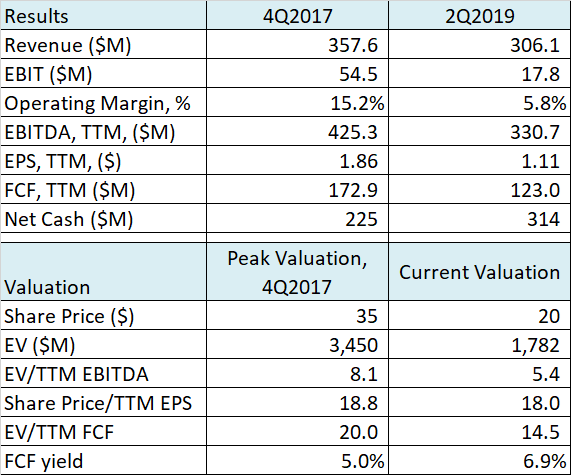 Table 2: Comparison of results and valuation between peak and trough periods. Source: author’s analysis based on company releases.

Deceleration of economic activities worldwide will cause revenue decline. Some of the verticals such as data-center, industrial and auto have not rebounded. While there are signs of a recovery of the industrial market, any further slowdown in the economy and further trade tension will affect the demand for TSEM’s foundry services.

Slowdown in a particular market vertical, such as the inventory correction in smartphones in 2018 and in data-center in 2018 to 2019, will affect revenue. While smartphone is mature, the increase in RF content in the phones plays into the strength of TSEM. 5G introduction, starting slowly in 2020, will probably drive a large replacement cycle into 2021 and will further benefit TSEM.

There are always risks that the design wins do not lead to revenue. This is the fact of life for a semiconductor foundry. Its revenue ultimately depends on whether its customer’s device is a market success or not. The foundry has no control of the success of its customer’s products. The things it can do is to prioritize working with Tier-1 customers who tend to have a better batting average and to position itself with must-have technologies for future applications. I believe this is TSEM’s strategy.

TSEM’s revenue has bottomed and is on the upswing. Through the trough, TSEM has been profitable and generating FCF. With a high 50% to 60% drop-through of incremental revenue, profitability leverage is large in the upcoming growth cycle. An accelerated decision to invest $100M in capacity is a vote of confidence in future revenue growth. A model analysis shows that share price can double from here in 2 to 3 years, resulting in an attractive ROI. The downside risk is low as current valuation is modest.

Long-Term Business Investor
1.89K Followers
30+ years of trading part time, managing my own money. Value investor. I focus on the industry, business strategy and management execution, rather than the stock price and market trends. I have a long term (3 to 5 year) investment horizon. My research is done to guide my own investment decisions. I look at many companies, conduct detailed research on a few, and invest in those where my research shows compelling value within my investment horizon. I share my research on SA to gain feedback to sharpen my research and logic, and also to discover potential blind-spots.
Follow

Disclosure: I am/we are long TSEM. I wrote this article myself, and it expresses my own opinions. I am not receiving compensation for it (other than from Seeking Alpha). I have no business relationship with any company whose stock is mentioned in this article.

Additional disclosure: All investments have many risks and can lose principal in the short and long term. The information provided is for information purposes only and can be wrong. By reading this you agree, understand and accept that you take upon yourself all responsibility for all of your investment decisions and to do your own work and hold the author harmless.