Another month and another record high in the stock market. Why are stock prices climbing to new highs? One major contributing factor is the accommodative monetary policy implemented by our government's central bank. For the first time in 12 years since the last financial crisis began (2007), the Federal Reserve recently cut interest rates by -0.25% to a new target range of 2.00% to 2.25% (see chart below). 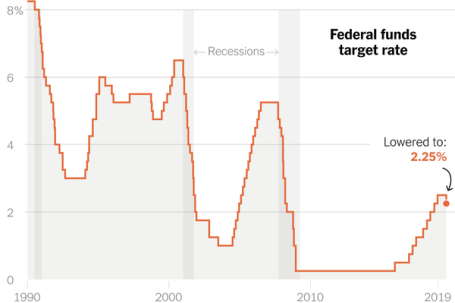 At the end of this period, with economic activity having expanded and millions of new jobs created, the Federal Reserve realized it needed to begin creating some ammunition to protect the economy for the next, eventual recession (even if the timing of the next recession remained unknown). A gun needs bullets, therefore beginning in late 2015, former Federal Reserve Chair, Janet Yellen, began manufacturing economic bullets with the first of nine interest rate hikes in December 2015.

If you fast forward to today, the economy objectively remains fairly strong and there are no clear signs of an impending recession. Current Federal Reserve Chairman Jerome Powell made it clear that he has decided to fire one of those stimulative bullets yesterday as a precautionary insurance measure against a potential U.S. recessionary slowdown (click here to read the rationale behind the Fed's rate cut). Fed officials also added to investor enthusiasm when they declared they would end the runoff of their $3.8 trillion asset portfolio (i.e., "halt quantitative tightening") two months earlier than previously planned.

Thanks in part to Powell's protective rate cut measure and halt to quantitative tightening, the Dow Jones Industrial Average closed at a new all-time monthly high of 26,864, up +1.0% for the month. Records were also set by the S&P 500 index, which increased by +1.3% and the technology-heavy Nasdaq market achieved a monthly advance of +2.1%.

Despite global slowdown fears and evidence of flattening corporate profits, the 2019 year-to-date stock returns realized thus far have been quite impressive:

In addition to the recent interest rate cut, investors have appreciated other positive fundamental factors enduring in the economy. For example, the job market remains incredibly strong and resilient with the current unemployment rate of 3.7% hovering near 50-year record lows. This week's recently released data from payroll processor ADP payroll also showed a healthy addition of 156,000 new private-sector jobs.

Another confirming source of data highlighting the strength of our economy has been Consumer Confidence (see chart below). Consumer activity accounts for roughly 70% of our country's economy, therefore with confidence approaching 20-year highs, most investors can confidently sleep at night knowing we are likely not at the edge of a steep recession. 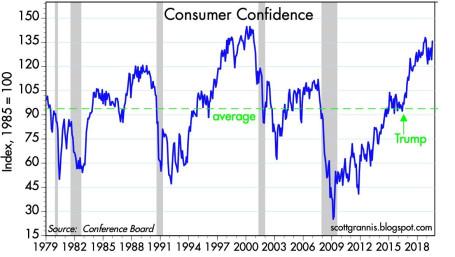 Although the economy appears to be on firm footing, and the Fed has been accommodative with its monetary policy, not everything is rainbows and unicorns. In fact, recently released data from a Chicago-based manufacturing purchasing managers' survey showed a reading of 44.4, a level indicating a contraction in economic activity (the lowest level seen since December 2015). 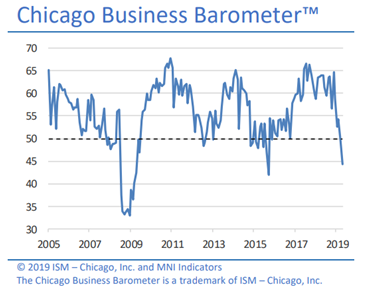 The ongoing U.S.-China trade spat has also contributed to slowing global activity, even here in our country. U.S. trade representatives (Treasury Secretary Steven Mnuchin and top trade negotiator Robert E. Lighthizer) once again recently returned empty handed from China after another round of discussions. But there have been some positive developments. In return for tariff reductions, China has shown indications it's willing to purchase large amounts of U.S. agricultural products (e.g., soybeans and other products) and seriously address concerns about the protection of U.S. intellectual property. Discussions are expected to resume on our soil in early September.

Despite all investors' concerns and fears, the U.S. stock market has continued to climb to new record territories. Economic data may continue to unfold in a "mixed" fashion in coming weeks and months, but investors may gain some comfort knowing that Fed Chair Jerome Powell has a gun with protective interest rate cut bullets that can be fired at potential recessionary threats attacking our economy.

This article is an excerpt from a previously released Sidoxia Capital Management complimentary newsletter (August 1, 2019).

Disclosure: Sidoxia Capital Management (SCM) and some of its clients hold positions and certain exchange traded funds (ETFs), but at the time of publishing had no direct position in any other security referenced in this article. No information accessed through the Investing Caffeine (IC) website constitutes investment, financial, legal, tax or other advice nor is to be relied on in making an investment or other decision. Please read disclosure language on IC Contact page.

Wade Slome, CFA
1.25K Followers
Wade W. Slome, CFA, CFP® is President and Founder of Sidoxia Capital Management, LLC and published author of How I Managed $20,000,000,000.00 by Age 32. In addition, Mr. Slome has been a media go-to resource as seen on CNBC and ABC News. He has also been quoted in the Wall Street Journal, USA Today, New York Times, Dow Jones, Investor's Business Daily, Bloomberg, Smart Money, among other media publications. Online, he is lead editor of the investment blog, InvestingCaffeine.com and a contributing writer to Morningstar, and Wall St. Cheat Sheet. Bloomberg identified him as the second youngest manager among the largest 25 actively-managed U.S. mutual funds in 2005. Besides his work at Sidoxia, Mr. Slome is an instructor at the University of California, Irvine extension department, where he teaches the Advanced Stock Investment course. Wade Slome holds an MBA from Cornell University with an emphasis in Finance. He earned a B.A. in Economics from UCLA. In addition, he holds the credentials of CFA (Chartered Financial Analyst) and CFP® (Certified Financial Planner). Mr. Slome managed one of the ten largest growth funds in the country ($20 billion in assets under management) at American Century Investments, and currently manages a hedge fund in addition to separate customized accounts for a selective client base at his firm (Sidoxia Capital Management, LLC) in Newport Beach, California.