Throughout the course of the entire year, large caps have been leading the market higher, and they are the only market cap range of the equity market to actually make new highs in the most recent leg higher for equities. After this week's pullback, though, the S&P 500 is coming perilously close to breaking through support at the prior highs from April and last fall. A close below those levels today would not be a great mood-setter for the bulls heading into the weekend. 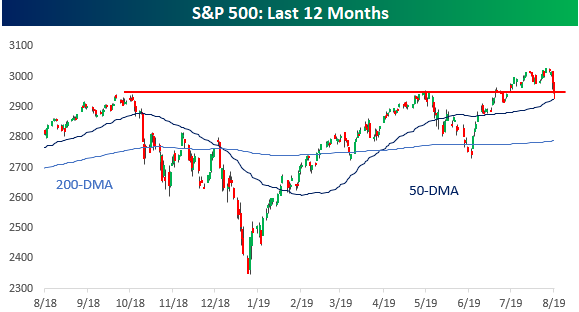 For mid and small caps, the picture is even less optimistic. The S&P 400 Mid Cap index never came close to a new high in the most recent rally, but it did appear to break its downtrend from the highs late last year. But that breakout quickly turned to a fakeout this week as the S&P 400 broke back down below its prior downtrend line and is breaking below the 50-DMA today. 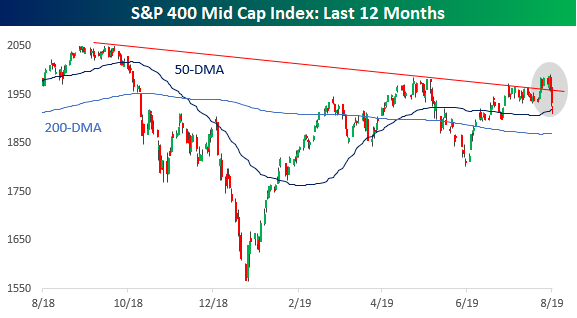 For the small-cap Russell 2000, it's an identical picture. In this case, the break above the downtrend line was even more short-lived, and like the S&P 400, the Russell 2000 is not only back below its 50-DMA, but it also isn't that far from breaking below its 200-DMA. 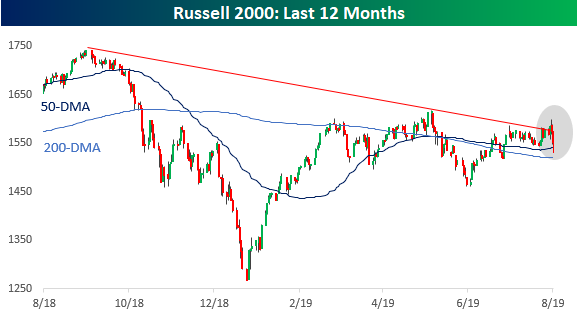 Bespoke Investment Group
44.44K Followers
Bespoke Investment Group provides some of the most original content and intuitive thinking on the Street. Founded by Paul Hickey and Justin Walters, formerly of Birinyi Associates and creators of the acclaimed TickerSense blog, Bespoke offers multiple products that allow anyone, from institutions to the most modest investor, to gain the data and knowledge necessary to make intelligent and profitable investment decisions. Along with running their Think B.I.G. finance blog, Bespoke provides timely investment ideas through its Bespoke Premium (http://bespokepremium.com/) subscription service and also manages money (http://bespokepremium.com/mm) for high net worth individuals. Visit: Bespoke Investment Group (http://bespokeinvest.com/)
Follow
10 Comments
To ensure this doesn’t happen in the future, please enable Javascript and cookies in your browser.
Is this happening to you frequently? Please report it on our feedback forum.
If you have an ad-blocker enabled you may be blocked from proceeding. Please disable your ad-blocker and refresh.