It was an inauspicious start to August for the stock market, for oil prices, and for the midstream sector, due to the overriding influence of interest rates and tariff rates this week. MLPs had their second worst week of the year and the worst week since early February. Broader Midstream (AMNA) fared better, with good earnings releases helping some of the larger players in the U.S. and Canada outperform. 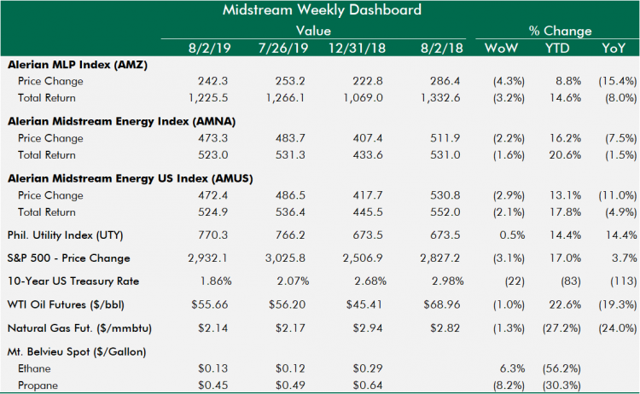 Interest rates dropped 20 basis points to close the week below 1.90%, and the flight to safety in equities helped utilities outperform. Oil declined 7% Thursday for the worst one-day decline in more than 4 years, but finished the week down just 1% after recovering some on Friday

We are halfway through 2Q earnings season for midstream and a few trends have emerged. Scale, diversification, and integration are important differentiators at this point in the energy cycle (the upstream despair point in the cycle). Enterprise Products Partners (EPD), ONEOK Inc. (OKE), TC Energy Corp. (TRP), Enbridge (ENB), Williams Companies (WMB) all fit that description (to varying degrees) and were able to post solid results and outperform this week. Magellan Midstream Partners (MMP) and Crestwood Equity Partners (CEQP) were also able to trade well through earnings by being generally boring and executing with consistency (acknowledging CEQP over a much shorter time period), with steady execution driving confidence over time.

EPD and OKE have large integrated NGL businesses with processing, transportation and fractionation assets across key producing regions. Despite NGL prices being down 30%+ quarter over quarter, EPD and OKE posted resilient results that highlighted their bargaining power. EPD also benefitted from dislocated natural gas prices in West Texas that should have also benefitted Energy Transfer LP (ET) (reporting this week).

EPD and OKE (and to lesser degree, Kinder Morgan (KMI) and WMB) have cleaned up their contract mix since the original 2015 commodity price decline such that direct commodity margin exposure is more limited than it has been historically. In addition to pruning commodity exposure, the ability to offset weakness in one area with strength in another was on full display this quarter. Finally, being the dominant midstream operator in a captive region, like OKE with NGLs in the Bakken (and TRP for natural gas in Canada) is a massive advantage.

Large midstream franchises are growing more durable, even as smaller players and producer customers seem increasingly fragile. For generalist investors, it's hard to justify straying beyond the larger, more diversified players when allocating to midstream. There remains a yield-hungry set of (mostly retail) investors, for which the allure of higher-yielding MLPs is too much to ignore, but that group is much smaller than it used to be.

On the other hand, dedicated long-only midstream asset managers have to build out a diverse portfolio. They can't just own these few dominant names and still justify large active management fees. If this performance divergence continues, the natural outcome over time will probably be some shift in the investor base away from dedicated midstream allocations and into (a) infrastructure funds that can own the shrinking group of quality midstream names or (b) a basket of quality midstream names within a broader equity allocation.

The end of a month came and went again this week. MLPs were slightly lower on the month, including distributions. That's three negative months out of the last four, but bigger picture MLPs have held up much better than other energy stocks in recent weeks and months. 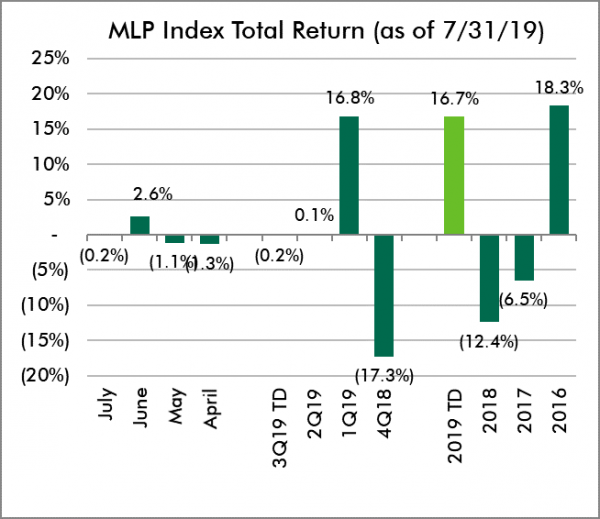 Oil prices were slightly lower month over month, while natural gas futures finished the month down 2.8%, even though things felt much worse for gas, especially as northeast natural gas producers announced results and were crushed. Propane (-14%) and ethane prices (-40.8%) were off much more than oil or natural gas, but as noted above, at least to this point of 2Q reporting season, NGL price weakness doesn't seem to be having as big an impact on results for the big NGL players (Targa Resources (TRGP), DCP Midstream (DCP) and ET have yet to report).

Looking ahead, August has typically been a challenging month for MLPs and midstream stocks. Over the past 12 years, there have been 8 negative and 4 positive months, the worst hit rate of any month over the last 12 years. The best August ever was 8.2% in 2014, helped by the takeout announcement of KMP/EPB at premium prices. In 2015 and 2017, Plains All American Pipeline's (PAA) respective distribution cuts dragged down the sector.

The broader midstream index (AMNA) underperformed the MLP Index in July. Big picture, midstream is still ahead of AMZ by more than 500 basis points YTD. 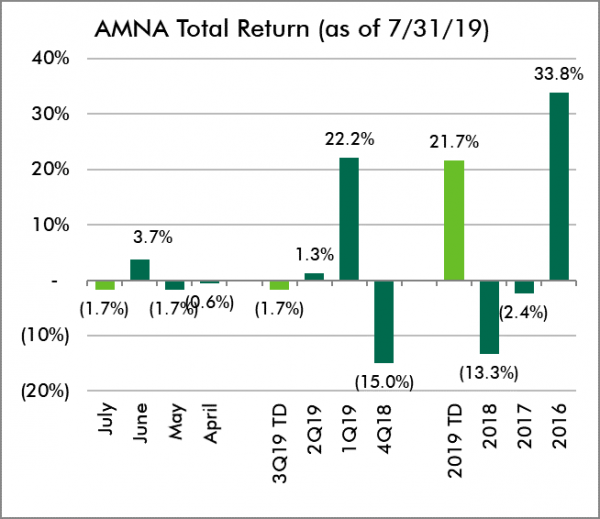 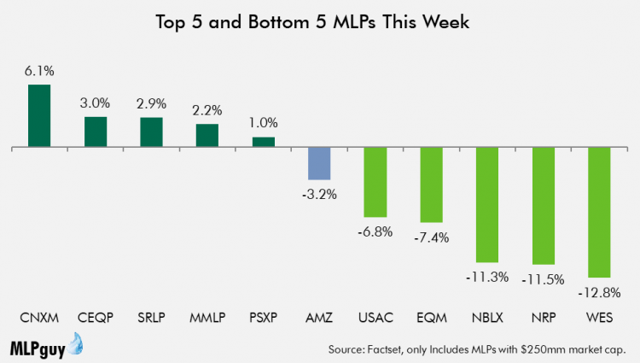 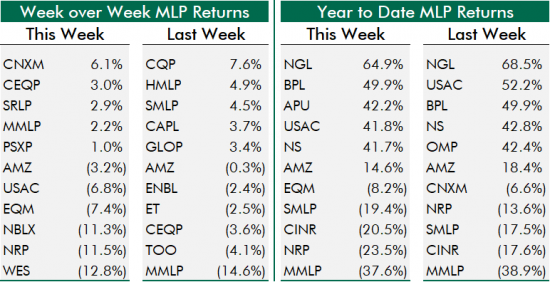 The only positive midstream corporation this week was OKE, which traded very well post earnings and may have been more of a beneficiary of the interest rate drop than others, maybe seeing some flows along with KMI and WMB from those seeking defensive, income-oriented exposure within the S&P 500 this week. On the downside, Apache Corp. (APA) deferrals announced with earnings crushed ALTM again. The market was not pleased with the update from the Antero family this week, although the timing of earnings, along with a big leg down in liquids prices, didn't help. Tallgrass Energy's (TGE) poor stock price performance of late continued. 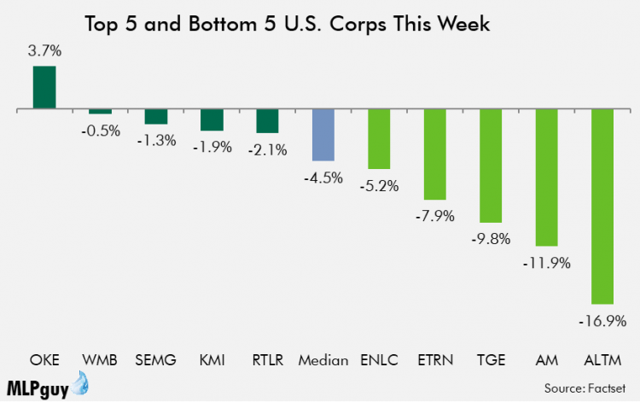 AM, ENLC and TGE repeated in the bottom 5 this week, while KMI and SemGroup Corp. (SEMG) repeated near the top of the group. On the YTD leaderboard, KMI and OKE have further separated themselves from the pack by holding up much better than WMB and Plains GP Holdings (PAGP) over the last month. The bottom 5 got much uglier week over week, with AM now down 20%+, when just 2 weeks ago it had positive YTD total return. 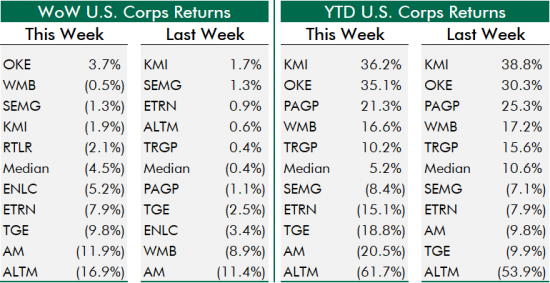 Canadian midstream outperformed U.S. midstream this week, especially the three largest names (Pembina, ENB and TRP), each of which announced strong quarterly results this week. With broader equities and interest rates declining so much, fund flows into the more defensive names within Canada probably helped performance as well. 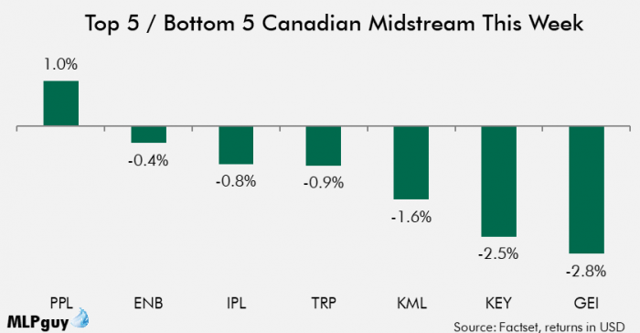 Week over week, ENB went from worst to close to first this week. On the YTD leaderboard, recent carnage in ENB's stock price has it clinging to double-digit positive total return YTD, well behind the average of the rest of the group. TRP reclaimed the top spot from Keyera Corp. (OTCPK:KEYUF).

EPD's VLCC-capable offshore oil terminal FID announcement came this week, with support from Chevron (CVX). DCP and WES appear to be working together in the DJ to be as efficient as possible in an area where they are essentially a duopoly. In Canada, TRP's asset sale bonanza continued with another big utility divestment, and ENB announced the long-anticipated open season for its Mainline crude oil pipeline.

Hinds Howard
4.9K Followers
I serve as Portfolio Manager on the Listed Infrastructure Team at CBRE Clarion Securities, a global asset management firm based in Radnor, PA. My primary focus is on investing in Midstream companies, including Master Limited Partnerships (MLPs), as well as transportation companies (rails, airports) for larger infrastructure investment team.