US investors should at present hold off buying euros and investing in European instruments. The euro is likely to weaken further against the US dollar. Christine Lagarde will probably continue the easy money strategy of Mario Draghi.

US investors should be aware that the US dollar index (DXY) is mostly based on the euro. The chart below shows the US dollar at 98.15, which is the highest y/y. 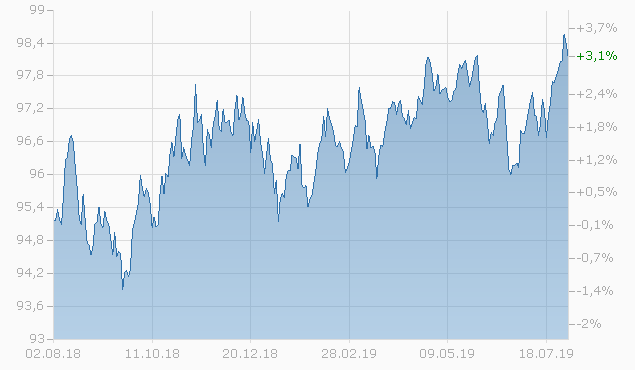 The composition of the "basket" is as follows:

Here is a chart of the USD and the euro y/y: 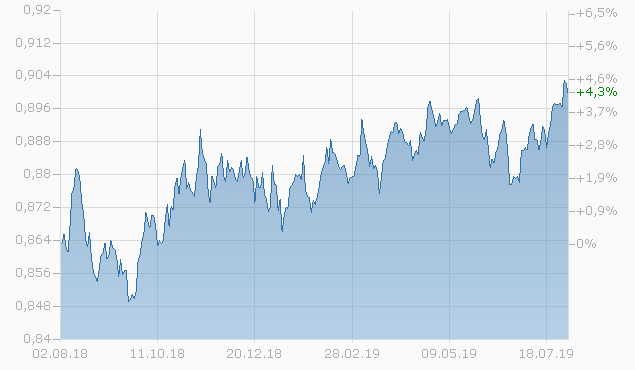 It is clear that the DXY follows fairly closely the USD/EUR as the euro counts for 57.6% of the DXY. This helps to make it clear that the euro has weakened against the USD.

Most commentators think that Christine Lagarde will continue the accommodative policy of the ECB that Mario Draghi has been following for several years. Lagarde has been head of the IMF, so that even if she is a lawyer by training, she should by now be well enough versed in economics to see that the EU is in a poor financial shape. The national debt of member states is for the most part well over the 60% ratio of debt to GDP, and that means that member governments cannot assume much more debt. The German economy has shown signs of slowing down amidst the global slowdown presently occurring, and that means that the ECB will probably continue buying government bonds and assuring sufficient liquidity. With interest rates at or close to zero, the EU economy should have been performing brilliantly, but it has not. Inflation is still below the vaunted 2% goal of the central bankers, and growth is sluggish. The result is that the euro has lost ground on Forex markets as yields in the US are much higher.

The Fed to the Rescue

Given that the Fed has now cut rates by 25 bps, one would think that the US dollar logically should weaken against other currencies. Instead what has happened is that the dollar has gone up and not down as the DXY indicates. This can be explained by reckoning that the US economy will benefit from the lower interest rates and therefore do better in the future. This is the first interest rate cut in over a decade.

It has appropriately received a great deal of attention from market observers. There are divergent views on whether a rate cut was really necessary since President Trump says the US economy is doing great. Even so there are several indications that all is not well in the land of opportunity. One can view the rate cut as a sort of insurance policy to keep stock market valuations high and anticipate a possible recession in 2H19. It could also be considered bowing under political pressure though President Trump wanted a 50 bps rate cut and complained that the Fed had disappointed him. Chairman Powell has said that this rate cut is not the start of a series of cuts, but in any case the difference between 2% and zero is not particularly great. That difference of 2% is what is needed to weaken the US dollar in order to make it competitive with currencies like the euro and Japanese yen. The central banks of these countries have brought the interest rate to zero.

The Case of Switzerland

It is interesting to note in this context that the SNB (Swiss National Bank) has also brought down Swiss interest rates practically to zero. In fact most Swiss government bonds have a negative yield. The problem for the SNB is that the Swiss franc is still under such heavy demand that it has become necessary to take measures to weaken the Swiss franc so that export industries are not wiped out by the high prices that would result if the Swiss franc was allowed to float freely. In the case of the US, the higher American interest rates attract capital.

The Trade War with China

President Trump has now threatened to impose a 10% tariff on the remaining $300,000,000,000 of Chinese imports that so far have not been subject to tariffs. This announcement came almost immediately after the negotiations with China were broken off again. The implications of a long drawn-out trade war between the US and China are mostly negative. Chinese companies will have to seek new markets for their goods and substitute the links of their supply chains that are subject to American influence. The US will for the near future have to contend with inflation caused by the tariffs and then in the longer term find alternative sources for the goods formerly coming from China. The cost of building up the manufacturing base that American corporations have shifted to China will not be negligible and will take a certain amount of time to put in place. Thus the trade war will put a good bit of strain on the American economy.

The conclusion is that investors are faced with a problem regarding the euro and investments in the EU. At the moment the US dollar is highly valued in relation to the euro, which continues to weaken. This means that it would not be wise to purchase euros that are going to devalue vis-à-vis the US dollar. However, if the trade war continues and the long-awaited recession should rear its head, the Fed will almost certainly revert to zero interest rates and inject liquidity into the system via QE and more QE. Those measures should have the effect of weakening the US dollar in the Forex markets. The euro may be par with the US dollar at that point if not sooner. The best strategy may be to wait and see what happens with the euro and look elsewhere for possibilities of diversification.

Additional disclosure: Data from third-party sources may have been used in the preparation of this material and WWS Swiss Financial Consulting SA (WWW SFC SA) has not independently verified, validated or audited such data. WWS SFC SA accepts no liability whatsoever for any loss arising from use of this information, and reliance upon the comments, opinions and analyses in the material is at the sole discretion of the user. Please consult your own professional adviser before taking investment decisions.
The comments, opinions and analyses expressed herein are for informational purposes only and should not be considered individual investment advice or recommendations to invest in any security or to adopt any investment strategy. Because market and economic conditions are subject to rapid change, comments, opinions and analyses are rendered as of the date of the posting and may change without notice. The material is not intended as a complete analysis of every material fact regarding any country, region, market, industry, investment or strategy.

All investments involve risk, including possible loss of principal. Stock prices fluctuate, sometimes rapidly and dramatically, due to factors affecting individual companies, particular industries or sectors, or general market conditions. Bond prices generally move in the opposite direction of interest rates. Thus, as prices of bonds in an investment portfolio adjust to a rise in interest rates, the value of the portfolio may decline. Special risks are associated with foreign investing, including currency fluctuations, economic instability and political developments.