Just like its manufacturing counterpart last week, the July release of the ISM Non-Manufacturing survey came in shy of consensus expectations. While economists were expecting the headline reading to increase slightly from 55.1 to 55.5, the actual reading came in at 53.7. That's a level that is still consistent with steady growth, but it is also the weakest reading since August 2016. Similarly, on a combined basis and accounting for each sector's share in the economy, the combined Composite PMI for July came in at 53.4, which was the lowest reading since August 2016. 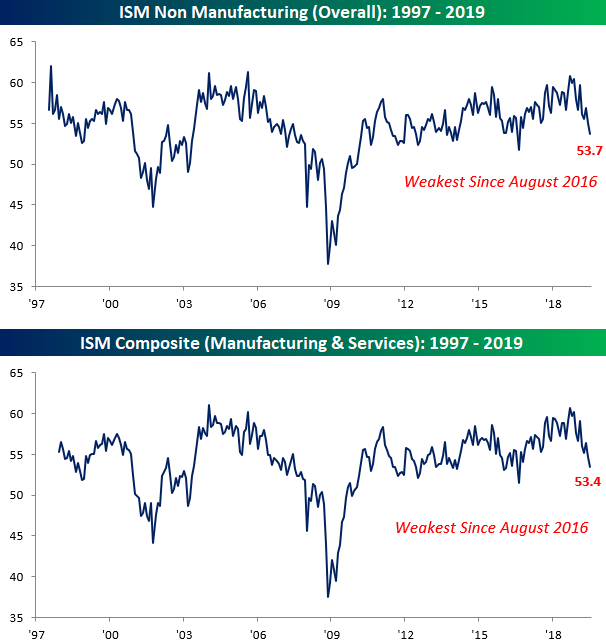 The table below breaks down the July ISM Services report by each of its sub-components and shows their m/m and y/y changes. Breadth in this month's report was biased to the downside. Compared to June and last year, just three components showed increases. 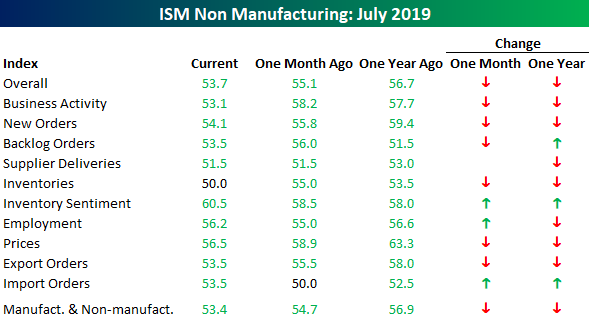 Bespoke Investment Group
45.31K Followers
Bespoke Investment Group provides some of the most original content and intuitive thinking on the Street. Founded by Paul Hickey and Justin Walters, formerly of Birinyi Associates and creators of the acclaimed TickerSense blog, Bespoke offers multiple products that allow anyone, from institutions to the most modest investor, to gain the data and knowledge necessary to make intelligent and profitable investment decisions. Along with running their Think B.I.G. finance blog, Bespoke provides timely investment ideas through its Bespoke Premium (http://bespokepremium.com/) subscription service and also manages money (http://bespokepremium.com/mm) for high net worth individuals. Visit: Bespoke Investment Group (http://bespokeinvest.com/)