Further, the total draw in crude oil inventories in the month of July was the highest dating back to 1983, primarily driven by the declining crude oil imports from Saudi Arabia: 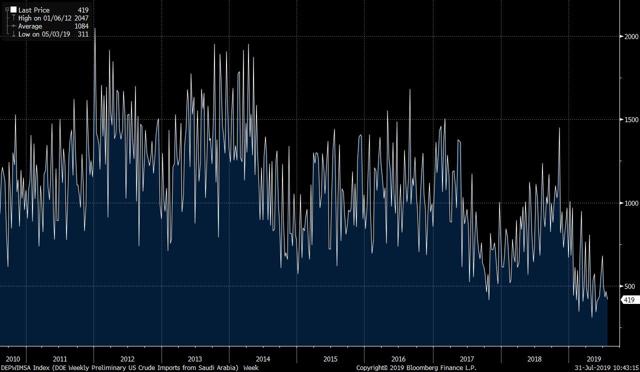 Normally, the combination of the above facts would have boosted oil prices, but this has not been the case, at least so far:

Further, the stock prices of offshore drillers (Noble (NE), Transocean (RIG), Valaris (VAL)) that tend to trade based on the longer end of the Brent crude oil price curve have plummeted during the same period, indicating that equity market participants do not expect an oil price recovery anytime in the near future:

To explain the above conundrum, I offer the following four explanations:

First, even though U.S. crude oil inventories have plunged in July, the drop has only partially made up for the previous buildup: Total oil stocks, including and excluding SPR, have increased by 77 million barrels and 92 million barrels, respectively, in the preceding 12-month period, indicating an oversupply of several hundred thousand barrels per day during the period. In other words, several more months of continued crude oil draws might be necessary for oil prices to rise meaningfully.

Second, the US dollar has strengthened against many foreign currencies, including the British Pound, the Euro, and the Chinese Yuan. Because oil is a global commodity, even if oil prices remain stable or rise against an average basket of global currencies, it can decline against the strengthening US Dollar.

Third, the escalating trade war between the United States and China has led to increasing worry among market participants that a global recession may be around the corner, and if this risk materializes, then global oil demand would drop depending on the severity of the ensuing recession.

Fourth, as certain countries contemplate and even set timelines to phase out fossil fuel vehicles, electric vehicle sales across the world continue to grow at a rapid pace. This gradual but continuing trend is likely to pressure long-term demand forecasts for global oil demand, potentially at an accelerating rate.

All four of these factors have affected the global oil market in recent weeks, and when combined, they have pressured oil prices lower, despite the record crude oil inventory draw in the month of July.

Yesterday, Iran said that it has seized yet another oil tanker in the Persian Gulf, and this morning, the US identified shipments linked to CNPC, China’s biggest state-run oil company, in defiance of sanctions against Tehran.

This wild card taking a sudden turn for the worse could exacerbate the recent, rapid inventory draws and reverse the downward price pressure by removing several hundred thousand barrels of daily Iranian oil supply from the market.

I highlighted the year-over-year jump in inventories, the strengthening US dollar, emerging recession worries, and accelerating EV sales as the underlying reasons of why oil prices have not reacted as many expected.

Having said that, I expect the US Federal Reserve's recent decision to cut interest rates in line with many other central banks across the world to favorably impact the global demand throughout the rest of 2019 and in 2020.

Further, potentially following some more volatility in asset markets, I expect the US and Chinese governments to find common ground and avert a trade-induced global recession as the political downward risk of not doing so is too high for both sides.

As the above scenario pans out as I laid out, I expect oil prices to start reflecting the underlying fundamentals of a global energy shortage with Brent crude oil prices rising back above the $80 per barrel level by the end of 2019.

ValueAnalyst
8.7K Followers
You'll never see me write a long bio listing all of my credentials and degrees or refer to myself in the third person. I love discussing ideas and I appreciate it when people can play devil's advocate without resorting to personal attacks. In short, I employ a long-only, long-horizon, focused value style, guided by thorough bottom-up research and backed by years of accounting and finance experience. When people ask me "what do you do?" I assume they mean for fun.