Burger King (NYSE:QSR) plans to roll out the plant-based Impossible Whopper nationally on August 7 2019. In the first test market of the Impossible Whopper the increase in foot traffic at Burger King stores selling the product was very impressive. This increase in foot traffic, among other things, likely contributed to the chain’s national rollout of the product. If you would like to try an impossible whopper and a regular whopper side by side you can take advantage of a new promotion that offers a $7 Impossible Whopper taste test. For $7 you get both the Impossible and original Whopper, the offer is available in store or courtesy of free DoorDash (DOORD) delivery.

These ROFR's allow the company to opportunistically expand their footprint as locations come up for sale. Since May 2012, the company has acquired more than 620 Burger King locations from existing franchisees with a track record of reinvesting in the locations to drive accelerating sales comps and EBITDA growth. Through the company's ROFR’s they can acquire up to another 500 existing Burger King Locations as well as additional existing Popeyes locations in two states. TAST can also open new greenfield locations for both brands.

TAST became the largest BK franchisor in the US through a merger with Cambridge Franchise Holdings, announced on February 20, 2019. TAST believes the acquisition is transformative as the combined company becomes larger creating more scale providing a new platform to the company (the 55 Popeye’s locations) and expanded the company's territory into the south and southeast. Historically TAST was entirely located in the northeast which has higher wage inflation and slower overall growth. By diversifying into the Southeast they expect to add a faster growing geography with lower wage growth helping to control total company wage cost. Additionally, TAST believes they will be able to achieve $25 - 30M of annual EBITDA synergies, to be implemented by year end 2019. In the second image below, you can see how complimentary the acquisition was on a geographic basis. 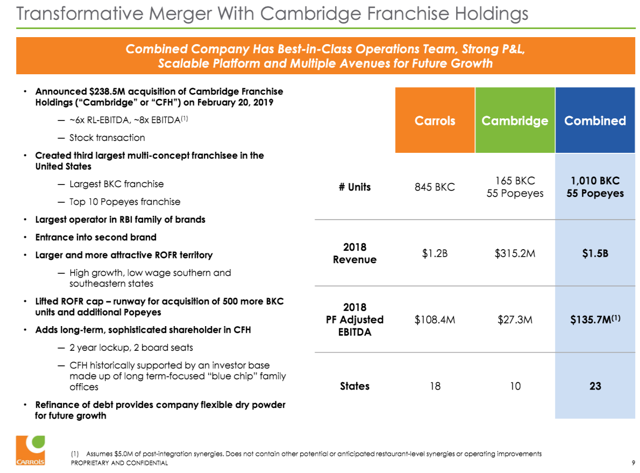 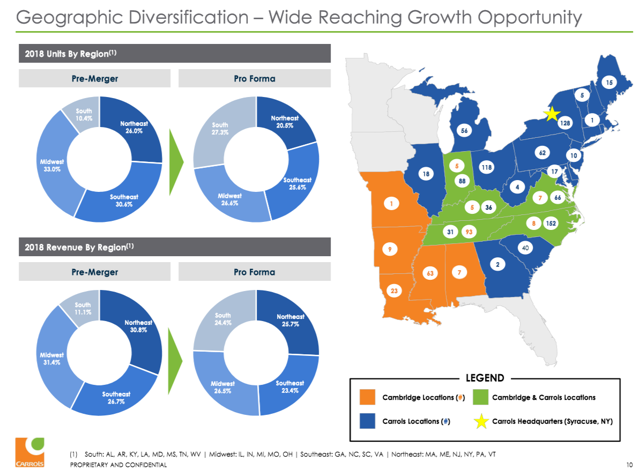 How does the roll-up acquisition model work for TAST financially?

Typically, TAST is able to buy franchises on average at 3.7x RL EBITDA, and then with their operating improvements TAST can typically improve restaurant level EBITDA by ~200 bps. This improved EBITDA drives the post synergy acquisition cost to about 3x RL-EBITDA. This is compared to the public market valuing TAST at somewhere between 4.5x RL EBITDA on the low end and 5.5x on an enterprise value basis. As a result, there is an immediate 1.5-2.5 turn valuation gain by TAST acquiring these locations and the associated RL-EBITDA.

The company has built an impressive track record of 31 out 33 of the last quarters maintaining positive comps with fairly consistent EBITDA margins despite the consistent headwinds in the restaurant market of ever-increasing COGS, labor costs and competitor discounting. Additionally, TAST consistently, but not always, has higher comp sales than the total Burger King system. Management believes this is driven by the TAST model of reinvesting in stores to modernize them and drive higher sales growth. The superior comps and stable EBITDA margins are shown below.

What is the TAST Reinvestment model?

In our opinion TAST has done a very good job efficiently allocating capital in the renovation projects. The company typically focuses on “cost efficient” remodels vs full remodels as roughly 80% of the TAST Burger King footprint is already up to date. Management has guided that the majority of go forward full remodels will be a part of acquisitions. There is a fairly significant cost difference between the cost efficient remodels TAST aims for which typically cost $150-250K vs the full remodel price tag of $500-650K.

TAST refinanced their debt as a part of the Cambridge acquisition providing significant dry powder to execute on their future growth plans at a attractive interest rate. Pro Forma Net Debt after the acquisition is 2.9x EBITDA and within managements comfortable range of approximately 3x. 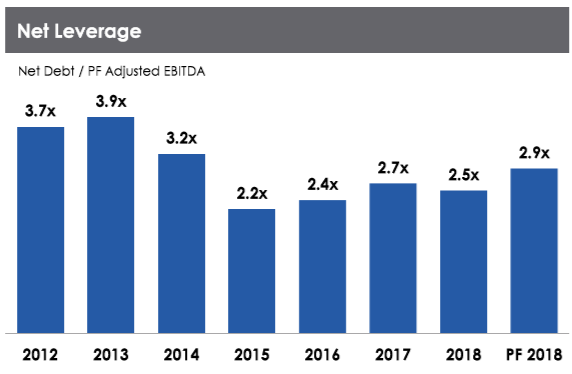 Paul Flanders mentioned on the Q119 Earnings call “The proceeds from a $425 million Term Loan B were used to refinance our existing 8% notes, to pay our Cambridge's indebtedness and to pay various fees and expenses related to the financing. The facility also included a $125 million undrawn five-year revolving credit facility that will be used to execute our growth initiatives moving forward…In the end, we were able to considerably reduce our cost of funds from 8% to below 6%, while expanding the capital available to fund our growth strategy.”

The company has four main avenues for future long-term growth, execution of their ROFR acquisition strategy to grow their franchise presence in BK locations, grow the Popeye’s franchise business, open new greenfield locations. Finally, TAST has put in place a solid foundation to add new brand franchises. Below is management's view of their long-term growth potential. 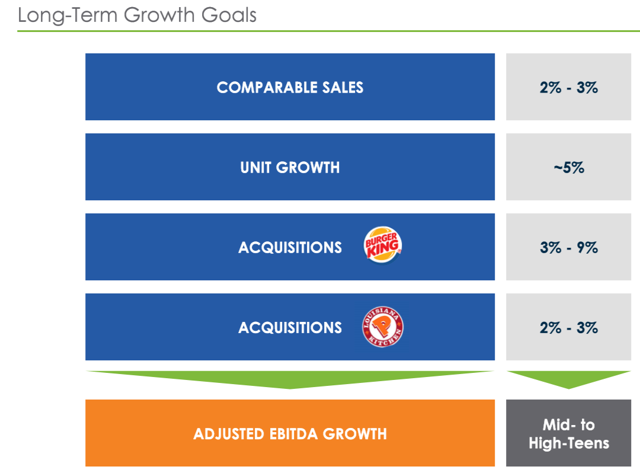 While we believe that the TAST model will provide shareholders good value over time as the company continues to execute their growth strategy. One of the things we look for at 1035 Capital is catalysts that will change the way investors value the future potential of the company. In the case of TAST we see a 9-15 month trade opportunity as Burger King rolls out the Impossible Whopper nationally, including in TAST’s footprint.

I happen to live in St. Louis which was the first test market for the Burger King Impossible Whopper. Hearing the hype, I went out and tried the new Impossible Whopper and I must say it was quite good. However, full disclosure, the improvement in calories or nutritional value is minimal. It’s just a vegetarian burger that tastes good. Since I tried the Impossible Whopper, I have been going around town talking to as many Burger King workers as possible and I consistently hear the employees talk about how many impossible whoppers they are selling. 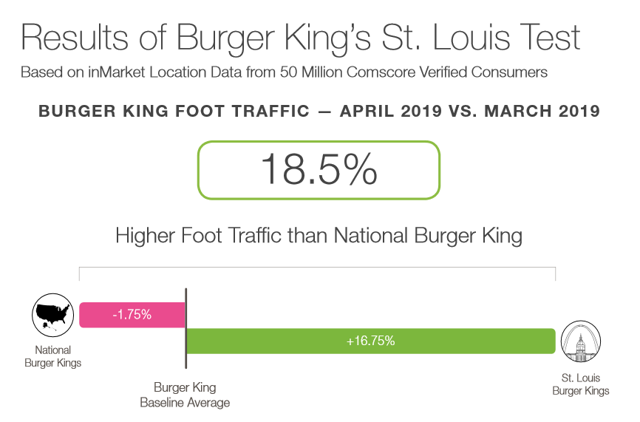 I am not sure if Beyond Meat and Impossible Foods will prove to be fads in the long term, however in the meantime there is a lot of hype around these two companies and their products. As shown above by the InMarket survey the Impossible Whopper drove strong traffic gains for Burger King stores in the initial test market and suggests they expect traffic boosts nationally as the product is rolled out. Given TAST’s position as the largest franchisor of Burger King in the US, they are uniquely positioned to benefit from the expected foot traffic boost this national rollout could provide.

Furthermore, when we look back at prior earnings calls, we note that management is not including any benefit to comparable sales from the rollout of this exciting new product in their outlook, which seems conservative to us. Comparable store sales growth is a function of average ticket price and foot traffic. Considering increases in foot traffic are highly correlated with sales growth it follows that if the introduction of the Impossible Whopper drives increases in foot traffic even half of what was reported by InMarket in the initial test market – there is a large opportunity to drive much better sales than management/consensus is anticipating in the near term.

Since 2009 TAST has historically traded in a range of 0.15x sales to 0.60x sales. It is currently trading near the middle of the range around .30x sales. Typically, as sales growth increases, we see higher multiples applied to the shares. Since 2014 0.3x sales is the lowest multiple TAST has traded at within a range of 0.3 to 0.6x sales as shown in the chart below (via KoyFin). 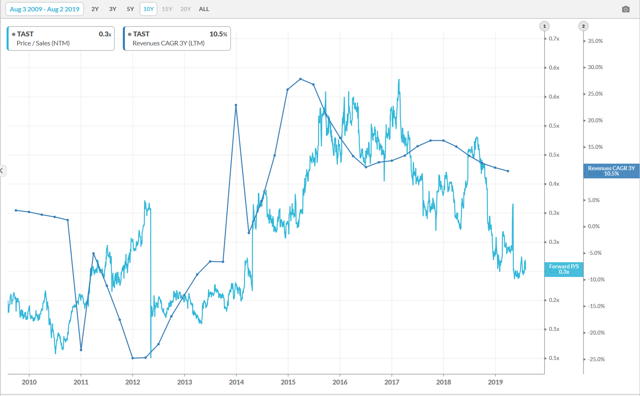 If we are correct that the Impossible Whopper will drive significant comp store sales growth via increases in foot traffic over the next few Q’s we believe we may see a repricing of TAST shares as the relatively depressed current multiple increases as do estimates. Given the relatively attractive valuation of TAST shares today with an interesting catalyst to drive sales higher we think shares can again achieve a .5x sales, the average sales multiple over the last 10 years, on NTM consensus revenue estimates of $1.6B in sales implies TAST shares being worth roughly $13.The math is as follows ($1.6B in NTM sales/61.2M shares outstanding)*0.5 = ~$13 without inclusion for potentially higher sales drive by higher foot traffic. By our estimates each additional $100M in NTM sales drives about $0.90 in share value based on the above 0.5x multiple.

On the Q1 2019 call Dan Accordino stated “we do not have any visibility in terms of how that product (the Impossible Whopper) is going to be rolled out and no, we have not baked in any guidance relative to the rollout of that product.” We believe this conservative stance is both prudent for the company and provides nice upside to TASTs estimates over the next 12 months which should drive improved multiples. We see this as a nice trading opportunity with about 50% upside in a relatively unloved restaurant stock with the majority of its sales tied to Burger King.

1035 Capital Management
980 Followers
At 1035 Capital, we focus on small and micro cap equities and look for both growth and value names to create a small cap core portfolio with better than index valuation and growth metrics. All of the stocks in our portfolio must have a strong catalyst to drive change at the company - a concept we call "front running the black box." Check out our website at www.1035Capital.com to learn more.

Disclosure: I/we have no positions in any stocks mentioned, but may initiate a long position in TAST over the next 72 hours. I wrote this article myself, and it expresses my own opinions. I am not receiving compensation for it (other than from Seeking Alpha). I have no business relationship with any company whose stock is mentioned in this article.