Soligenix (NASDAQ:SNGX) has a wide pipeline with late-stage candidates in the PDT treatment for various health problems, including Cutaneous T-Cell Lymphoma (CTCL), Oral Mucositis, Pediatric Crohn's Disease, and a vaccine candidate for ricin. Unfortunately, the company hasn't managed to bring any product to the market. Recently, Soligenix has gained some attention through an article, which claimed that it can generate more than $500M in revenue if both SGX301 and SGX942 are approved. Note that the company is currently valued at ~ $20M, which is ridiculously cheap compared to the analyst's expectation. We have examined the thesis and have done our due diligence to conclude that Soligenix is currently attractively priced. However, there are also certain risks that investors have to consider.

A glance at the financial position 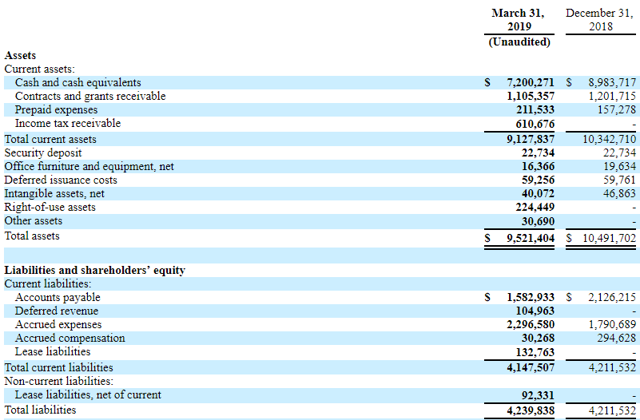 Other than contract and grant revenues, the company has no self-generated income. With the current burn rate of ~$2M per quarter and ~ $8.3M in cash and grants receivable, Soligenix can probably fund its operation until 2020. However, if its drugs get approved, the company will either have to find a marketing partner or build its own sales team. The leap toward commercialization is often costly and risky, especially for investors. In the case of a lack of revenue and cash reserves, Soligenix will either have to rely on debt financing or equity financing, leading to a dilution for shareholders. On the other hand, finding a marketing partner is also not an easy task.

Soligenix has currently two drug candidates in the late-stage development with phase 3 results expecting in late-2019 and end-2020.

SGX301 is an ointment with the active ingredient hypericin, which is preferably taken up and retained by tumor cells. These molecules can be activated by fluorescent light (low energy) to produce oxygen radicals in cancer, which finally leads to cell death. Soligenix aims to use the drug in the first line to treat CTCL. Although there are no officially FDA approved first-line therapy for this disease, there are several guidelines that describe the following methods: Topical corticosteroids, Topical mechlorethamine, Topical bexarotene, Ultraviolet phototherapy, and Localized radiotherapy. The use of photodynamic therapy that Soligenix is approaching can be seen as more effective compared to these methods. The activating light is low energy compared to UV therapy and radiotherapy, which damages healthy skin area. Besides that, the active compound hypericin is concentrated in tumor cells, while other topical ingredients are non-selective.

The company believes that the market for CTCL is around 20,000 patients in the US. With incidents of around 2,000-3,000 per year, this is rather a small market. Besides that, there are many competitive and established treatments for the first line. Moreover, PDT therapy often requires extra training and instruments for doctors, which could hinder the adaptation after market entry. Nevertheless, photodynamic therapy has its advantages as discussed above and might prove to be useful in the future.

Results from the last Phase 2 trial show that the drug was safe and well-tolerated, with 58.3% of the CTCL patients responding to SGX301 treatment compared to only 8.3% receiving placebo (p < 0.04). Unfortunately, we have found no published data about this trial besides the statement. Note that, the p-value is very close to 0.05, which is the minimum requirement for a possible FDA approval. With a 58% overall response rate, the drug is slightly better than topical bexarotene, which showed a response rate of ~50%. In the phase 3 trial, the problems with statistical significance seem to persist as the company announced the additional recruitment of 40 patients. One reason might be that Soligenix is a relatively small company with limited resources while having a wide pipeline. To avoid potential delays, it would be better if the company plan bigger trials in advance.

Dusquetide is the second drug in the late-stage development phase with phase 3 data coming in December 2020. In the previous phase 2 trial, Dusquetide was tested in a double-blind controlled study with 111 patients receiving at least 55 Gy irradiation. The results were a 50% reduction (18 days in the placebo vs. 9 days in the SGX942 1.5 mg/kg treatment group, p = 0.099). However, this is below the threshold of 0.05 demanded by the FDA. The company performed a subgroup analysis and found a 67% reduction (30 days vs. 10 days in the placebo and SGX942 1.5 mg/kg treatment group, respectively, p = 0.040 in those patients receiving the highest doses of cisplatin chemotherapy). However, even in this analysis, the threshold of 0.05 was just reached. Running another phase 3 trial with 190 patients might cause similar trouble like in the case of SGX301.

Another concern is the competitive compound GC4419 developed by Galera Therapeutics. In a phase 2 study with 223 patients, the duration of oral mucositis was reduced by 92% - from 19 days to 1.5 days - in patients treated with GC4419 (P = .024). The drug also reduced the incidence of oral mucositis through completion of radiation by 34% (P = .009) and lessened the severity of the condition by 47% (P = .045). The accumulated irradiation is 60-70 Gy, comparable with the trial running for Dusquetide. Galera Therapeutics has started a phase 3 trial in October 2018, 10 months later than Soligenix. Moreover, both companies have set very different completion dates. While Soligenix is anticipated to complete its study in December 2020, Galera Therapeutics has announced to finish its study in October 2024. Thus, GC4419 is likely to come to the market later, giving Dusquetide a head start.

There are some risks involved in the investment in Soligenix. The company has insufficient funding for its future operations and might have to raise money in the future. After accessing the potential of Soligenix pipeline, it's highly improbable that the company can generate $500M in the next 5 years. The latest phase 2 trial of its most developed drug candidates have problems with statistical significance. Normally, small drug effects are revealed in a bigger patient population. Despite all that, the company is now just valued at ~$20M, which is very cheap. If the company manages to succeed in one of its trials and gets the FDA approval, its share price can rise significantly in the future. This is a high risk/high reward target for opportunistic investors.

Tien Duy Vo
723 Followers
Everyone has his own personal view or strategy to invest. For me, it is the fascinating field of biotech companies. As a researcher, it is important to study data and trends. Biotech companies are by far one of the most promising growing tech fields. Humans' lifespan and health have been consistently increasing since the second world war. This is not only a result of the better food resources and lifestyle. More than that, it is the invention of new drugs and medical treatments that have significantly contributed to a longer, healthier, and more enjoyable life. In my view, investing in biotech companies is a smart investment that is beneficial not only for our health but also for the future generation as well.
Follow