I published my last valuation of Clinuvel Pharmaceuticals (OTCPK:CLVLY) on Seeking Alpha in January 2017 with a fair value of 20-27 USD/share. A lot of things have been happening in these two and a half years, so it's time to update my view - this time supported by a Monte Carlo simulation to cater for the bandwidth of potential outcomes and achievements on the different applications.

A quick summary of what happened in the past two years:

Progress in commercializing EPP in Europe

Being a slow starter after the EMA market approval of Scenesse for the treatment of EPP in Europe in 2014, the company has managed to steadily grow its revenues and achieve a premium profitability: 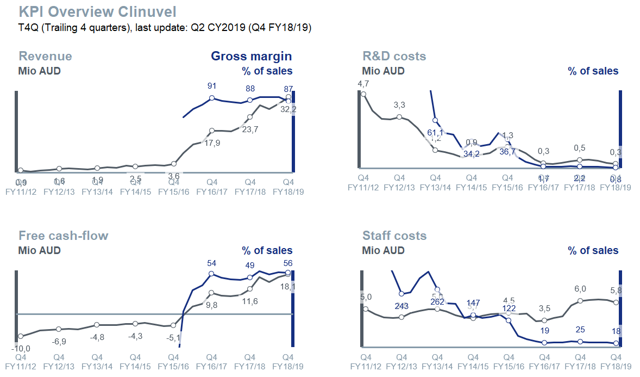 Highlights are the free cash flow margin of 56% at no debt, an earnings growth of 56% YoY, and the introduction of new treatment centers, e.g. Mainz in Southern Germany as of May 2019 with a capacity of 50 patients (equaling ~ 3 mn USD additional revenue) that will ensure further growth in the coming year.

After some delays, the company eventually filed their NDA for market approval in the US and received a PDUFA date for July 8, 2019. This deadline was postponed to October 6, 2019. Based on some documents that have been revealed by user Johnny H on sharecafe.com.au through a FOIA request, reason for the delay has been some missing documentation of the manufacturing process at Evonik in Birmingham, Alabama (US). As they could not provide updated information prior to the original PDUFA deadline, I consider this the probable reason for the delay. While, of course, the FDA decision outcome stays unpredictable, this seems to be fixable quite easily for a professional company as Evonik (OTCPK:EVKIY).

While in the past, the company's communication policy made North Korea appear talkative, things have changed in the last months. Clinuvel has hired an IR Manager with the promising name Malcolm Bull and has toured investor conferences and investment banks over the past 6 months to promote Clinuvel's equity story.

These events led to a remarkable increase in share price to levels above 24 USD.

However, the last weeks saw a correction of ~30% from the all-time highs. I assume that one reason for the correction is the intense short selling of the stock:

Due to the low trading volumes of the stock, the still moderate 5% net short position created a lot of additional selling pressure in recent weeks - typically 30% of the shares traded on the ASX on a daily base were sold by shortsellers.

Taking Clinuvel to the Casino: A Monte Carlo Valuation

With the recent presentations of Clinuvel in an investor roadshow, we have some more insight into further applications of its lead drug afamelanotide. The main newcomers are an unnamed new application (in quite an advance stage, see page 4) and VP (Variegate Porphyria), which is mentioned to be in Phase II. However, the market perspectives for these upcoming indications are still vague for different reasons.

Therefore, I decided to change my valuation approach and take Clinuvel to the Casino - and conduct a Monte Carlo simulation to determine fair value and its sensitivities.

I used a total of 42 different parameters in the simulation, using a mean value for each and an estimated standard deviation (assuming normal distributions for all parameters). You can see all the assumptions in the following table: 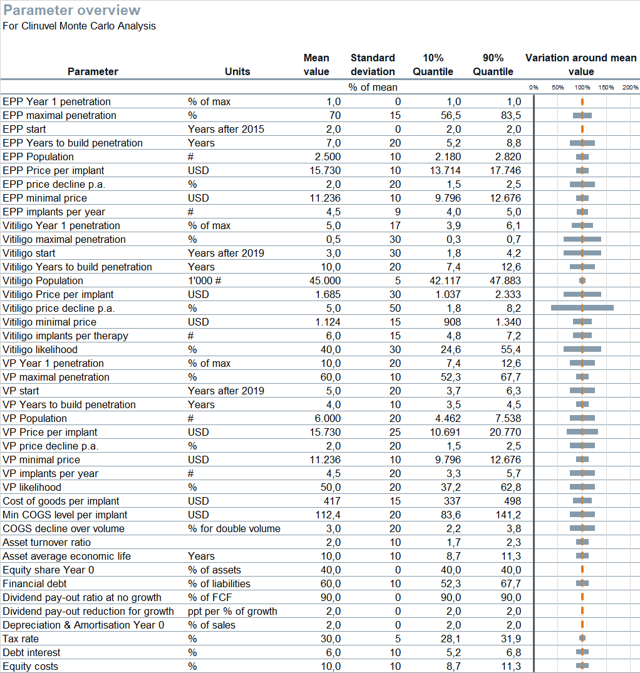 While many of these assumptions will be no surprise to anyone following the company, a few of them might need some explanation.

To understand where these assumptions lead to, let's first have a look at the outcome of the valuation if we just use the mean values for these parameters: 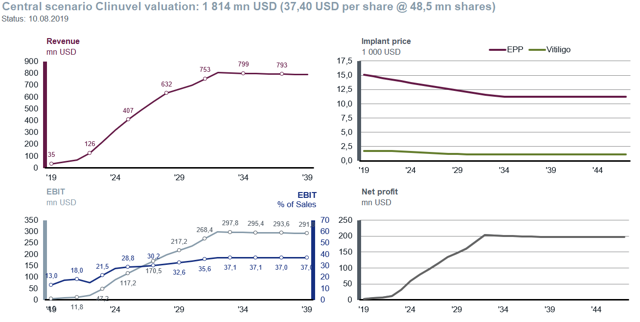 Using the mean value for all parameters, the company's revenue grows up to ~800 mn USD per year over the next ~10 years. EBIT margins are reasonable for a pharma boutique 37% (while today, they stand above 50% at much lower revenues). The steady state net profit would be around 200 mn USD. The net present value of the free cash flow to equity is 1,800 mn USD or 37 USD per share.

So much on the assumptions and the static picture - let's spin the wheel.

Rien ne va plus: Where does the wheel stop?

The next chart you will see is the outcome of running the previously described model 100,000 times while randomly varying the parameters as described above. In each of these 100,000 spins of the wheel, the tool calculates a fair value of the stock. What we get out of this is then the probability distribution as shown here:

To understand what is driving these results, let's have a look at the correlations between fair value and the different parameters:

No surprise that many Vitiligo-related variables are in the top ranks with regards to their impact on fair value. Vitiligo pricing is especially important as I assumed a price per implant for Vitiligo that is 90% lower than for EPP or VP (as governance bodies might argue that the impact on quality of life is far lower and the company can capitalize on their investment through volume). This has two implications: The lower price will also require a different formulation for Vitiligo to not trigger off-label use of Vitiligo products for the rare diseases. Secondly, due to the low price, the gross margin % goes down and becomes far more sensitive to price changes, hence driving the valuation impact. Furthermore, I expect that in the Vitiligo space, there could be more competition.

Equity costs also play a major role as the larger cash flows are several years out.

Beyond the mechanical valuation: Risks & opportunities

While the Monte Carlo analysis appears rather mechanical, it points us to the main risks and opportunities of the Clinuvel afamelanotide franchise:

Of course, valuation depends highly on the success rate of the different applications and the reach within the target population. With afamelanotide, Clinuvel has a drug that is still in its very early phase of exploitation. While EPP is steadily being rolled out in Europe, so far it is only being administered to less than 30% of the global target population.

So, success or failure to achieve relevant penetration for EPP (read: unlocking the US market) and establishing afamelanotide as a first-of-a-kind treatment in new applications such as Vitiligo, variegate porphyria, and other photo protection applications as well will be decisive for the value of the company in the course of the next decade.

While the FDA approval seems to be a very likely event, given the fact that there are multiple years of data on safe and effective use from Europe and that the FDA extended the PDUFA deadline instead of sending a Refusal-to-File letter, a FDA rejection would in the short term definitely be a setback for the company's future prospects. However, with both VP and potentially XP, there are two attractive orphan disease markets that the company could turn to instead, giving it a stronger focus on Europe (for VP) and Asia (esp Japan, for XP).

While the valuation has a comparably high sensitivity on the different parameters discussed here, it seems that Clinuvel Pharmaceuticals is still having a relevant margin of safety given the recent share price decline. While the upcoming FDA approval will be crucial for the short-term valuation, I believe a rejection will only delay the revenue expansion into new application fields but not cut the company's long-term franchise growth perspective. Whether this potential will be unlocked by the company organically, through partnerships or by being acquired remains to be seen.

MinusSinus
75 Followers
Educated as a PhD in Engineering and a MSc in business administration, I enjoy crossing the line between technology and commerce. Professional life so far spend in R&D management, as a business unit CFO, corporate strategy and now again R&D management. Value investor by heart; focusing on businesses that I think I have enough knowledge to understand second level dynamics at least.
Follow

Disclosure: I am/we are long CLVLY. I wrote this article myself, and it expresses my own opinions. I am not receiving compensation for it (other than from Seeking Alpha). I have no business relationship with any company whose stock is mentioned in this article.