Five short months ago, Sangamo (NASDAQ:SGMO) released their 2018 results, providing a program review which refocused development priorities. Gene editing trials for hemophilia B, MPS I and MPS II were put on hold. Gene and cell therapies became the more immediate opportunities. Hemophilia A became their lead program followed by gene therapy preclinical programs led by Fabry. The progress seen to date has been compelling. This article will recap the progress reported through the 2Q19 update this past Wednesday. More importantly it will highlight an approach to calculate the value created when a clinical program progresses from one phase to another. Sangamo just improved their risk-adjusted milestone payments by $100 million as they move their SB-525 program into Phase 3.

Hemophilia A Gene Therapy: The Race Is On

A lot has changed since I published the blog post Genomic Medicine: Disrupting Hemophilia A last year. The three primary companies vying for a share of this market remain BioMarin (BMRN), Spark (ONCE) and Sangamo.

BioMarin has long been viewed as the presumptive first-mover and likely to be the eventual market leader. While they still appear likely to be the first to market, their data has raised variability and durability concerns and Pfizer has made moves to cut into their time-to-market lead.

Spark has yet to provide promised updates following disclosure of treatment immune responses which raised concerns. They have pointed to the pending Roche (OTCQX:RHHBY) acquisition as the reason. They now have slipped into third place in my view.

Sangamo has provided several updates indicating they may have the best therapy and are cutting into the BioMarin clinical head start.

The collaboration economics include potential payments of up to $300 million for clinical development, regulatory and first-sale milestones, plus double-digit royalties on net sales. SB-525 is getting closer to the point where the estimated present value of the collaboration payments can be calculated. Sangamo has disclosed the full milestone potential of $300 million is earned upon first commercial sales as opposed to attainment of any sales tiers required in some agreements. Clinical Phase I trials pertain to safety, which arguably this program achieved in April 2018 after the safety monitoring committee reviewed cohort 2 data and determined it was appropriate to move to the higher dose cohort 3. That increased the probability-adjusted milestone cash flows by $16.8 million as the likelihood of approval moved from 9.6% to 15.2%.

The transition from Phase 2 to Phase 3 increases the risk-adjusted cash flows by $102.9 million as the likelihood of approval increases to 49.5%. (See Bio data link) The present value of these cash flows is not yet determinable because the company has yet to give specific amounts or trigger points. 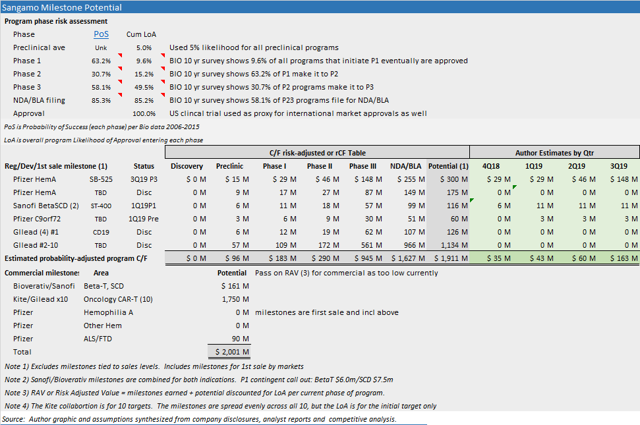 Sangamo expects to leverage this platform for their next preclinical gene therapy to treat Fabry disease (ST-920). The company has discussed dosage levels with the FDA but has not disclosed whether a non-therapeutic low dose will be required to confirm the safety profile seen with hemophilia A, or if they will be starting with a higher dose that has a better efficacy profile. Sangamo expects to have patients enrolled by the end of this year. 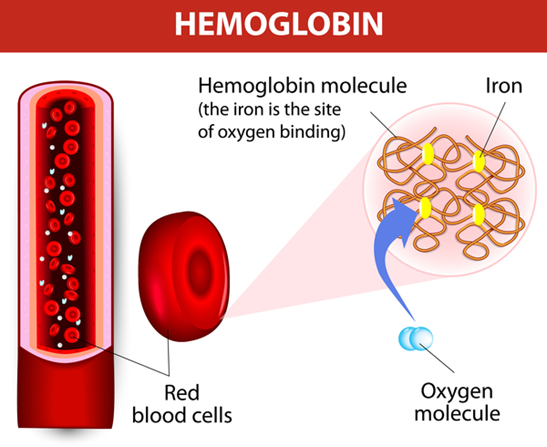 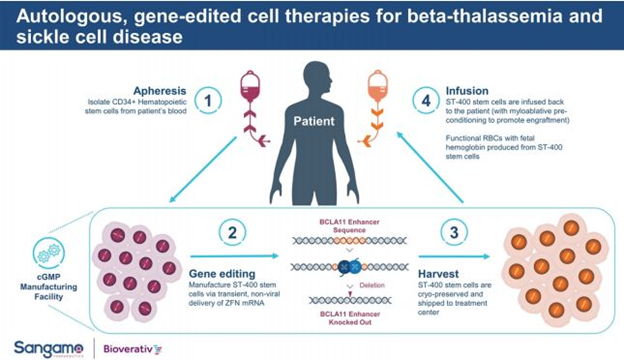 Management estimates that 85% of their performance obligations are now complete. Once the obligations are fulfilled, the resulting data will inform the decision whether Sanofi will take these programs into Phase 3. There are $115.8 million in development and $160.5 million of commercial milestone payments plus double-digit royalties on net sales associated with these programs.

The development of a universal CAR T therapy, which uses a healthy donor’s immune cells, gene-edits them for immunocompatibility and then multiplies them to treat hundreds of cancer patients at once (allogeneic), is the only practical option to treat more common cancer types,” explains Macrae. The collaboration is expected to create ten different products, with the first few being targets that people will recognize.

The Gilead (GILD) oncology collaboration for CAR-T continues to progress, though is largely under the radar until Gilead is ready to provide further updates. The agreement anticipates 10 targets. The first target is an allogeneic anti-CD19 CAR-T (KITE-037). Gilead expects to file an IND by the end of 2019 and initiate this trial in 2020. Additional targets are also in process as referenced by the above interview quote.

Gilead CSO John McHutchinson outlined their intent to be the oncology cell therapy leader by leveraging this collaboration which provides best-in-class gene editing for off-the-shelf therapy. 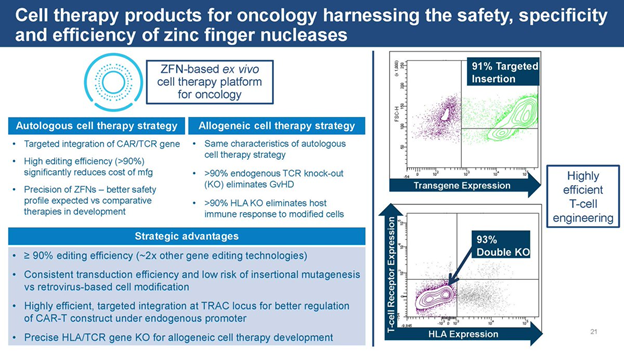 The per target development and commercial milestone potential is $126 million and $175 million, respectively plus single digit royalties on net sales.

Genes are segments of DNA that encode information. Gene expression is the process by which this instruction is converted into a functional product, such as a protein which dictates cell function. Transcription is the first step in gene expression where DNA information is copied into messenger RNA or mRNA. 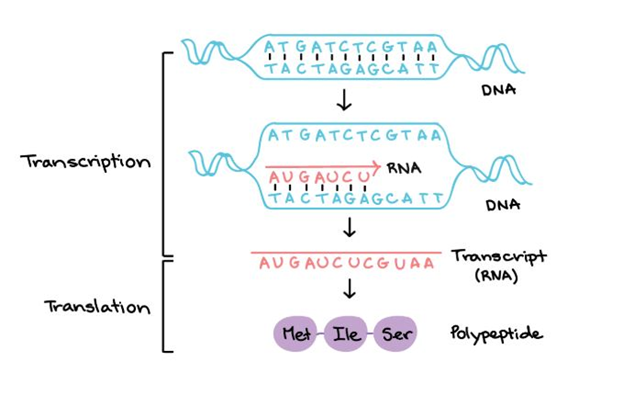 Sangamo has developed a gene regulation platform that engineers zinc finger protein transcription factors or ZFP-TFs to mimic the natural mode of gene regulation. The therapeutic outcome is achieved by an engineered ZFP-TF that can activate or repress the expression of a targeted gene. 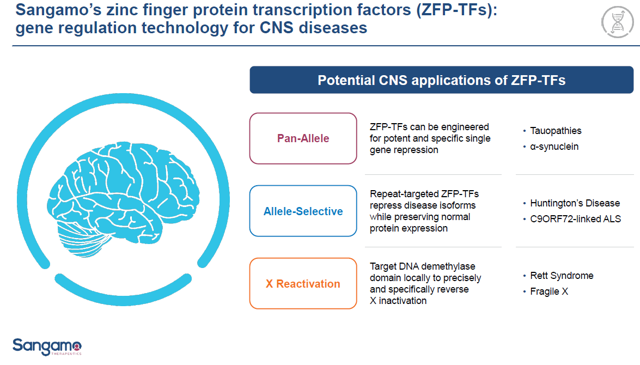 In Vivo Gene Editing: Not Yet Ready For Prime Time

Sangamo provided clinical updates for the first in vivo gene editing clinical trials last February. They have now concluded that although editing occurred, transduction improvements from zinc finger nuclease and delivery enhancements are needed and are currently being developed. They now expect to resume this effort in late 2020.

Sangamo is on the verge of having their lead clinical program for hemophilia A enter Phase 3 to be run by Pfizer. This is the biggest valuation catalyst Sangamo has yet encountered. Phase 3 means the most risky clinical phase II for efficacy is in the rear view mirror, which in turn reduces the discounted program cash flows used for pipeline valuation methodologies. Biotechnology Industry Organization or Bio estimates the probability of a successful Phase II to be 30.7%. Moving to Phase III improves the program risk profile and therefore increases the value of milestones and royalties. 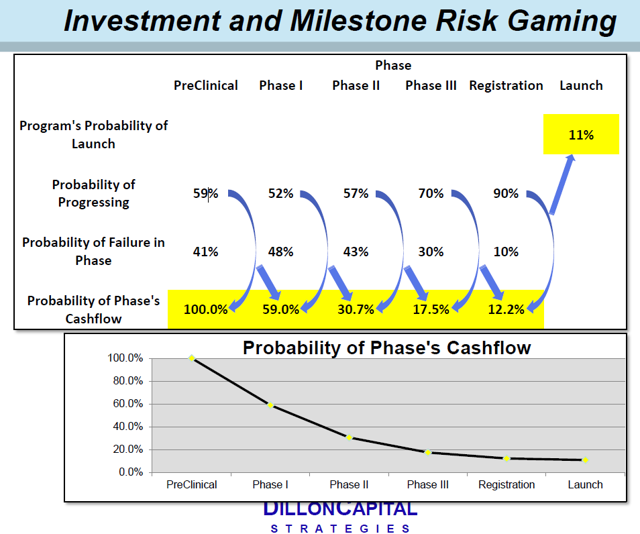 Read more at: Genomic Medicine: Is The Platform The FDA Product?

A second significant valuation driver of becoming a Phase 3 biotechnology company is the increased likelihood of being acquired for a premium. Evercore ISI published their gene therapy M&A playbook which included two important conclusions: 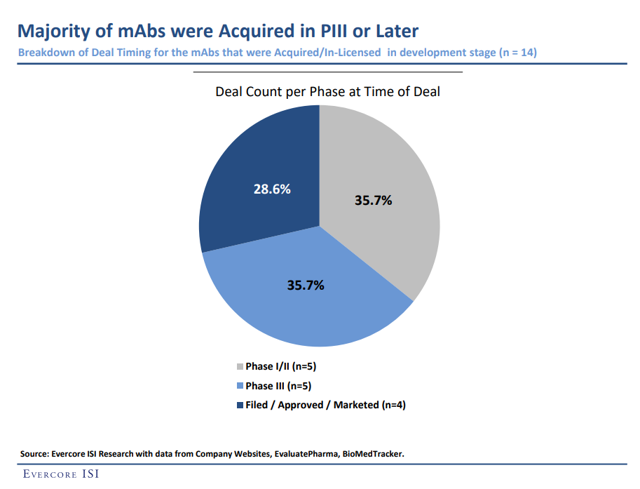 Marty Chilberg
2.69K Followers
Marty Chilberg is a seasoned financial professional with over 30 years of C-Suite, board, consulting and advisory experience. He began his career as a certified public accountant (CPA). He moved to Silicon Valley in 1981 to begin his career in the software industry, working for Atari, Daisy Systems, Symantec and Visio. He took Symantec and Visio through their initial public offerings as their Chief Accounting Officer and Chief Financial Officer, respectively. The past ten years have been focused on emerging macro investing themes including Cloud and Genomic Medicines.

Disclosure: I am/we are long GILD, SGMO, PFE. I wrote this article myself, and it expresses my own opinions. I am not receiving compensation for it (other than from Seeking Alpha). I have no business relationship with any company whose stock is mentioned in this article.