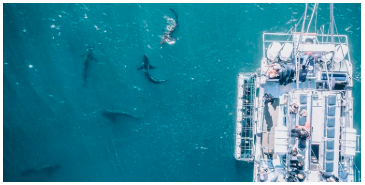 One of my all-time favorite movies is "Jaws," an iconic American summer movie about a great white shark that terrorizes a seaside New England resort town. Maybe it's because I like the musical score, or maybe it's because I like hearing my last name interspersed throughout the movie (a particularly noteworthy line is "Hooper drives the boat, Chief"), but I can be found watching the movie at least several times each summer. In fact, I like the movie so much that I've watched documentaries and read articles about the making of "Jaws." My husband thought that was a strange and ridiculous waste of time, but I actually learned some very interesting factoids.

To me, the most fascinating revelation is that the movie's producers - who had a track record of making successful films - initially wanted to use a real great white shark to give this movie authenticity.1 But great white sharks cannot be trained - and no amount of film-making confidence or business acumen could overcome this simple fact. So instead of holding a casting call for great white sharks, the film's director instead ordered the construction of a fake shark, and the rest is history.

The perils of overconfidence bias

This story made me reflect on a common trait I have seen among investors throughout my career - and, in my view, is currently at work in the trade wars today: Overconfidence bias. In particular, the "illusion of control" and the "desirability effect."

• Illusion of control is defined by the Corporate Finance Institute as "when people think they have control over a situation when in fact they do not. On average, people believe they have more control than they really do. This, again, can be very dangerous in business or investing, as it leads us to think situations are less risky than they actually are. Failure to accurately assess risk leads to failure to adequately manage risk."2

• Desirability effect is defined by the Corporate Finance Institute as "when people overestimate the odds of something happening simply because the outcome is desirable. This is sometimes referred to as 'wishful thinking,' and is a type of overconfidence bias. We make the mistake of believing that an outcome is more probable just because that's the outcome we want."2

In my view, the US has exhibited these two forms of overconfidence bias in its current trade situation.

First, the desirability effect: In my travels, it has been clear that the vast majority of Americans I've spoken with believe it would be desirable to have more favorable trading conditions, which helps to explain why the Trump administration has been so focused on strong-arming other nations, especially China, into better trade agreements. However, we need to recognize that just because something is desirable does not mean it is probable.

I continue to believe there are no compelling reasons for China to make any significant concessions to the US in a trade agreement, but the conflict continues because the outcome is so desirable. In the meantime, parts of the US economy are being negatively impacted; a prime example is China's refusal to buy US agricultural products, which is putting very significant pressure on US farmers. Even more damaging, in my view, is the ensuing economic policy uncertainty, which is impacting business confidence and business investment.

In addition, the Trump administration has always had an "illusion of control" vis a vis trade policy because of the US' status as the largest economy in the world. It clearly believes that it can control the trade situation because of America's size and influence, which is one important reason why it has pursued bilateral trade agreements.

However, the reality is that no one can control the trade situation - global free trade is a delicate, almost fragile interrelationship between many different economies. Conventional wisdom suggests that, just as great white sharks cannot be trained, tariffs are bad for the economy. One country's protectionist actions can set off a chain reaction that could disrupt the entire free trade ecosystem. And that's exactly what is happening today. America's move towards greater economic nationalism has encouraged even more economic nationalism. For example, South Korea and Japan are in the midst of a trade dispute that continues to worsen. Sales of Japanese cars in South Korea fell dramatically in the past month as South Koreans have been boycotting Japanese goods after Japan removed South Korea from its most favored trading partner list.3

The greater concern is that the problems can then extend beyond trade to foreign relations. For example, as the US trading conflict with China worsens, it becomes less likely that China will intervene on the US' behalf to help disarm North Korea. And in general, economic nationalism can become just plain nationalism. We are seeing that in many different parts of the world, most notably the UK and Italy right now.

Not surprisingly, markets are reacting to the escalation in trade wars the same way actors and film crew would react if they had to work with a "trained" great white shark.

The role of central banks

The good news is that, although the economy has been slowing, central banks are being proactive. In just the last week, several central banks, including the Reserve Bank of India, cut key rates. And so, while markets are clearly jittery as I write this today, I believe central bank policies will help support risk assets even as the global economy decelerates. In my view, the biggest risk remains trade - although I believe it is a bigger risk to the economy than to markets. That's because the biggest opportunity is central bank accommodation, which I expect to be supportive of markets.

I could envision a scenario in which the economy decelerates, but stocks and other risk assets perform relatively well. For investors with longer time horizons, I believe in staying the course - remaining well-diversified and exhibiting intestinal fortitude in the face of unnerving headlines.

Diversification does not guarantee a profit or eliminate the risk of loss.

Risk assets are generally described as any financial security or instrument, such as equities, commodities, high-yield bonds, and other financial products that carry risk and are likely to fluctuate in price.

The opinions referenced above are those of Kristina Hooper as of Aug. 12, 2019. These comments should not be construed as recommendations, but as an illustration of broader themes. Forward-looking statements are not guarantees of future results. They involve risks, uncertainties and assumptions; there can be no assurance that actual results will not differ materially from expectations.

Kristina Hooper
1.42K Followers
Kristina Hooper, CFP, CAIA, CIMA, ChFC, is Global Market Strategist at Invesco US. She earned a B.A. from Wellesley College, a J.D. from Pace Law and an M.B.A. in finance from NYU, where she was a teaching fellow in macroeconomics.