Cerus Corporation (NASDAQ:CERS) recently publicized their Q2 earnings results with a slight miss on EPS and a slight beat on revenue. The company continues to record steady revenue growth, while still making progress in their promising pipeline. Unfortunately, the stock remains stagnant and is essentially range-bound since 2018's Q2 ER. Now, the stock trades mostly on technicals and with little correlation with the company's progress.

I intend to review the recent earnings report and some of their upcoming catalysts. In addition, I review my plans for my CERS position and my new primary downside risk.

The company reported that their disposable kit demand increased 23% compared to Q2 of 2018. Cerus recorded $18.2M in product revenue, which was an 18% increase compared to Q2 of 2018. In addition, Cerus also reported $4.3M in revenue from government contracts. In total, Cerus brought home $22.5M in Q2 which encouraged the management to raise their 2019 product revenue guidance to a range of $72M to $75M due to the "strong demand for INTERCEPT." Total OpEx for Q2 came in at $31.2M, with a net loss of $17.6M. The company also reported a healthy cash position of $96.2M in cash, cash equivalents, and short-term investments.

Like most of CERS earnings reports, it was pretty much on target, and the company raised their annual revenue guidance. Although I have only been a shareholder for a short period of time, I feel confident Cerus will continue to hit their upcoming revenue estimates (Figure 2 & 3).

Cerus believes that their INTERCEPT products are becoming a reliable option for institutions and agencies who need safe and pathogen-free blood. The company continues to report robust demand for INTERCEPT kits in the U.S., Europe, the Middle East, and Africa. The U.S. platelet market is essentially dominated by the leading five blood centers who account for the distribution of roughly 70% of the aggregate platelet supply. Thankfully, Cerus has contracts with these top five centers and are working with them to escalate their use of INTERCEPT platelets.

The American Red Cross has found INTERCEPT to be a useful product and is now being employed at 17 Red Cross manufacturing facilities. Moreover, 13 of the 17 facilities have a BLA clearance, which permits them to distribute pathogen reduced platelets in other states.

Prior to March 29th, the Oxford Term Loan Agreement provided for secured growth capital term loans in two tranches that totaled up to $ 40M. The first tranche of $30M was drawn at the end of July in 2017, which was primarily used to repay outstanding term loans. The company opted to hold off on drawing on the second tranche. On March 29th of this year, the Company entered into a Credit, Security, and Guaranty Agreement with MidCap Financial Trust for a three tranche loan that tallies up to $70M with a maturity date of March 1, 2024. The first tranche of $40M was immediately used to repay the Oxford Term Loan Agreement.

Cerus also entered into a revolving loan with MidCap to initially borrow up to $5.0M. The amount borrowed under the Revolving Loan Credit Agreement can be increased, upon request by the Company by up to an additional $15M and has a maturity date of March 1, 2024.

What's Next For Cerus

Cerus has a strong list of upcoming catalysts that should help support the share price and potentially break out of this current trading range. In my opinion, the strongest of these catalysts would be the continued expansion of American Red Cross BLA filings. The company has stated that 13 American Red Cross facilities have BLAs to permit interstate sales of platelets. Nevertheless, investors need to remain vigilant about the possibility of an increase in the number of American Red Cross centers obtaining BLAs.

Another strong catalyst will be the CE Mark registration for INTERCEPT RBC in Europe. The regulatory review process is expected to conclude around March/April of 2020. If approved, the company anticipates recording commercial sales of INTERCEPT's RBC in Europe in 2020.

The near-term catalyst is the company's anticipated supplemental PMA submission for pathogen-reduced cryoprecipitate in the second half of this year. This PMA submission requires a six-month PMA review clock, so we could see approval at some point in 2020.

In previous Cerus article, OpEx and cash burn were my primary downside risks. Although these risks still endure, I now believe the stock's long-term downside risk comes from its industry and area of expertise. Blood transfusion and pathogen reduction don't get the big headlines in healthcare or the biotech arena. Despite the company's pipeline and commercial progress, the stock has been stuck in a trading range for years and isn't exactly a mainstream stock. Indeed, I enjoy having a few of these types of stocks in my speculative portfolio because they can be a sock drawer investment. However, the lack of hype and interest can make this investment extremely mind-numbing. In addition, the market valuation can often be disconnected from the fundamental progress in the company.

Is CERUS a Buy?

The company's growth prospects that they outlined at the institutional investor meeting in October are starting to look attainable. At that point, Cerus provided a structure on how they planned to double the company's product revenue over the next four to five years, which would require about 15% compounded annual growth. Cerus is determined to deliver on its goal and is already at 40% growth over 2018. Now, with the company's increased guidance, we could see Cerus record an additional 18% to 23% during 2019.

Cerus believes that the platelet and plasma product lines in North America and EMEA alone can translate into well over $100M of annual product revenue. New geographies and new product lines such as pathogen-reduced cryoprecipitate and INTERCEPT red blood cells add further to the company growth prospects.

Although the company's market cap is about $779M, the company has exposure to a calculated 2019 ~$41.2B global blood preparation market. Cerus would only need to capture a small percentage of these markets to be worthy of a higher valuation. Considering the names on their current customer list (Figure 4), I believe the company will become a mainstay in their market. 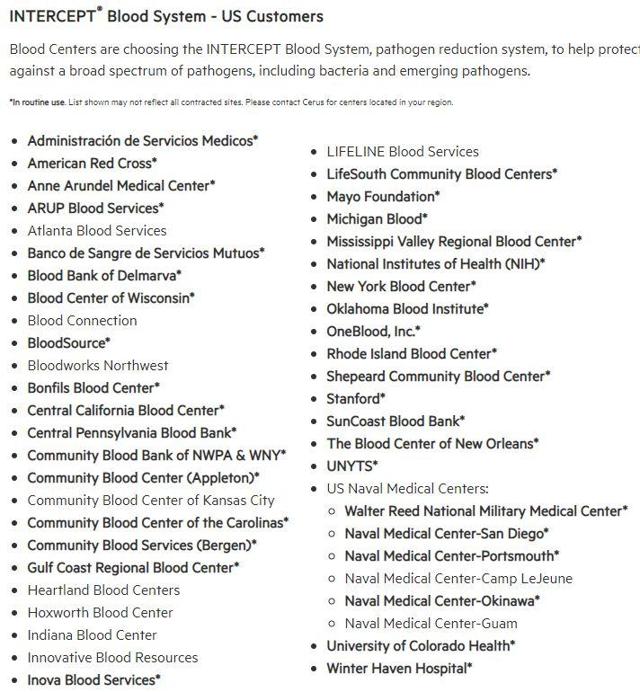 Cerus has reported another strong quarter that has revealed significant commercial progress and record product revenues. INTERCEPT Blood Systems sales are growing as a result of the clinical and economic benefits by using their pathogen inactivation technology. Cerus is making an effort to deliver a comprehensive product portfolio that can address some key issues related to blood transfusions. In the end, Cerus could become the market leader in this area for years to come. Unfortunately, it looks as if the market has failed to see this opportunity before Cerus and INTERCEPT hit full-stride. With European and U.S. INTERCEPT RBC and Cryo approval approaching in the coming years, we should see the company's revenue grow exponentially.

What is My Plan? I intend to add to my speculative position following earnings reports. It appears as if the market likes to hit the stock with some selling pressure and the stock recovers over the coming weeks. I believe Cerus will continue to experience revenue growth and every major dip will be an opportunity to add to a sock drawer investment. My long-term plan is to hold CERS for at least three years in anticipation of their cryo and RBC products receive FDA and EU approval, which should provide a substantial increase in revenues.

I would like to restate a section from my first CERS article:

Accurately forecasting the stock price in the near term is enigmatic. Considering this, I would like to stress attentiveness that CERS is still a speculative stock. There is a risk that investors lose all or a substantial amount of their investment. Although the upside for CERS is great, it is a long way from being free of risk.

Disclosure: I am/we are long CERS. I wrote this article myself, and it expresses my own opinions. I am not receiving compensation for it (other than from Seeking Alpha). I have no business relationship with any company whose stock is mentioned in this article.