Fox (NASDAQ:FOXA) announced it has agreed to acquire a controlling interest in Credible Labs for $265 million.

With the deal, FOXA hopes to combine Credible with its Fox Business and Television Station assets and leverage those audiences for Credible’s fintech marketplace.

San Francisco, California-based Credible was founded in 2012 to develop an online multi-lender marketplace that allows borrowers to receive competitive loan offers from lenders.

Management is headed by Founder and CEO Stephen Dash, who was previously Investment Director at M.H. Carnegie & Co.

Below is an overview video of how Credible works:

According to a market research report by TransUnion, in 2018, the unsecured personal loan market reached an all-time-high of $138 billion, marking a year-over-year [yoy] growth of 17%.

During the same year, fintech companies made up about 38% of the personal loans market.

In contrast, traditional banks’ and credit unions’ shares accounted for 28% and 21% of the market in 2018, representing a drop from 40% and 31% in 2013, respectively, as illustrated by the chart below:

Fox disclosed the acquisition price and terms as an acquisition of 67% of the Credible Labs equity for $265 million in cash to Credible’s shareholders.

Additionally, Fox committed to invest ‘up to $USD 75 million of growth capital to Credible over approximately two years.’

A review of the firm’s most recent 10-K filing indicates that as of June 30, 2019, Fox had $3.2 billion in cash and equivalents and $9.6 billion in liabilities, of which borrowings totaled $6.8 billion.

Since the stock began trading in mid-March as a result of the spin-off from the sale of its film and TV assets to Disney, the price has dropped about 20%, as the chart below indicates: 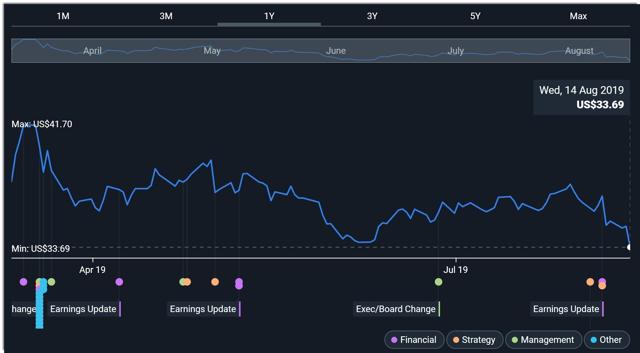 Fox is acquiring Credible to integrate it into its Fox Business and Fox Television Stations business segments.

As Fox CEO Lachlan Murdoch stated in the deal announcement,

Credible, which has tremendous synergy with core brands such as Fox Business and Fox Television Stations and will benefit from our audience reach and scale, will drive strategic growth, further develop our brand verticals and deepen consumer relationships.

Beyond that generality, Fox didn’t provide any meaningful details about how the deal would be synergistic.

One must assume that Fox wants to reach deeper beyond simply being a media firm and become a direct provider of marketplace services, in this case, financial services.

It is notable that the new Fox’ (post-Disney acquisition of its film & TV assets) first significant foray is in acquiring an Internet fintech marketplace company.

Fox wants to combine it with its existing media properties to leverage its existing audience into this fintech marketplace.

While the deal won’t immediately move the stock price needle for FOXA, it provides investors with a directional signal about Murdoch’s intentions for the future with the new slimmed-down Fox.

Members of my proprietary research service IPO Edge get the latest IPO research, news, market trends, and industry analysis for all U.S. IPOs. Get started with a free trial!