Shares of Deciphera Pharmaceuticals (NASDAQ:DCPH) have risen by just 1% since my September 2018 article suggested initiating a pilot position in the near term and accumulating weakness. To be fair, I had thought ESMO data for DCC-2618 would boost shares and instead they lost nearly half their value due to falling ORR (objective response rate).

Recently, well known ROTY member Biotech Phoenix submitted this one to Idea Lab, stating that pivotal data in 4th Line GIST was compelling with efficacy as good or better than approved therapies in the 2nd/3rd line setting. He also notes that the drug candidate (repretinib) appears differentiated with high selectivity against common mutations and potential to be best in class behind Gleevec (perhaps another takeout candidate in the targeted oncology space a la Array BioPharma and Loxo Oncology).

Given that recent data provides a high degree of derisking, secondary offering has bolstered cash reserves, and the firm has a deep pipeline, I'm looking forward to revisiting to determine if there's a near to medium term opportunity for us to take advantage of. 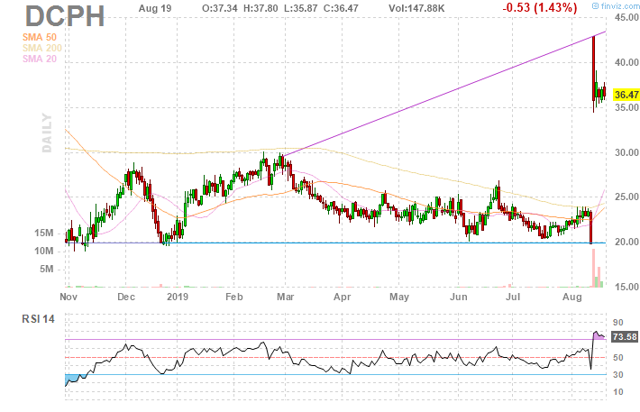 When looking at charts, clarity often comes from taking a look at distinct time frames in order to determine important technical levels to get a feel for what's going on. In the above chart (daily advanced), we can see shares trading in the $20 to $25 range for much of the past year. After positive data was reported, the stock gapped up to $40 before pulling back (currently consolidating just under secondary offering price point of $37).

In my prior article, I touched on the following keys to the bullish thesis:

Let's fast forward to the recently unveiled data set, investigating its implications, the current state of the company and future milestones to look forward to.

On August 13th, the company announced positive top-line results from the INVICTUS phase 3 study of ripretinib in patients with fourth-line and fourth-line plus gastrointestinal stromal tumors (GIST). Management highlighted significant treatment benefit in improved progression free survival (PFS) and magnitude of benefit in overall survival. In the study patients with advanced GIST (previous therapies included at least imatinib, sunitinib, and regorafenib) were randomized 2 to 1 to receive study drug or placebo, with median PFS of 6.3 months as compared to 1 month in placebo arm. Risk of disease progression or death was reduced by 85% (HR of 0.15, p<0.0001) compared to placebo. As for key secondary endpoints, ORR was 9.4% (placebo = 0%, p-value = 0.0504) and median overall survival of 15.1 months compared very well to 6.6 months for placebo arm (HR = 0.36, nominal p-value = 0.0004).

As for safety profile, repretinib was considered generally well tolerated with 49% Grade 3 or 4 treatment-emergent adverse events comparing favorably to 44% on placebo arm. To be fair, certain side effects (bilirubin increase, alopecia, fatigue, nausea, etc.) were far more pronounced in the treatment arm.

As a result of these impressive results, the company will be submitting its New Drug Application to the FDA in the first quarter of 2020. Additional results from the INVICTUS trial are expected to be presented at an upcoming medical meeting.

On the same day, updated phase 1 data was released as well in patients with second-line through fourth-line plus GIST (additional results to be presented at upcoming medical meeting). Data included an additional six months of maturity from last cut-off and continued to support development of ripretinib across multiple disease settings (justified continued progress with INTRIGUE pivotal phase 3 study comparing study drug to sunitinib in second line GIST patients). 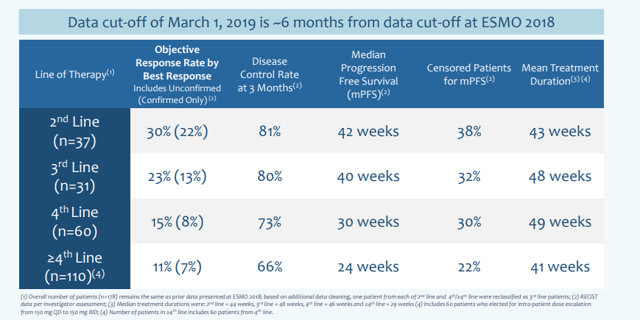 Ripretinib was generally well tolerated, and updated adverse events were consistent with previously presented phase 1 data in patients with GIST (little in the way of surprises at this point). Note that 17% of patients experienced treatment-emergent adverse events that led to dose reductions and 49% of patients had TEAEs leading to study drug interruption.

On the conference call, management pointed out that patients are being treated well beyond RECIST progression (this dynamic could be due to receiving clinical benefit from repretinib beyond progression). For example, in 4L/4L+ cohort showed mean treatment duration of 41 weeks as compared to median PFS of 24 weeks.

For the second quarter of 2019, the company reported cash and equivalents of $225.4 million as compared to net loss of $21.5 million (doesn't include proceeds from recent secondary offering). Research and development expenses nearly doubled to $34.8 million, while G&A almost tripled to $13.2 million. Also keep in mind that management recently executed an agreement with Zai Lab (ZLAB) to commercialize ripretinib in Greater China Area ($20 million upfront cash payment, up to $185 million in potential milestone payments plus royalties in low to high teens).

As for upcoming catalysts, above, I mentioned that updated phase 1 data for ripretinib and results from INVICTUS pivotal study will be presented at upcoming major medical meetings (followed by regulatory submission for 4th line GIST). Enrollment continues for the phase 3 INTRIGUE trial in 2nd line GIST patients. As for the company's TIE2 kinase inhibitor rebastinib, initial data from a phase 1 study (combined with carboplatin in patients with advanced or metastatic solid tumors) is expected in the second half of 2019. Moving on to DCC-3014 (CSF1R inhibitor), phase 1 data in patients with advanced malignancies (dose escalation portion) is expected later this year as well. An asset of particularly high interest is DCC-3116, which inhibits cancer autophagy via inhibition of ULK kinase. IND filings are expected in mid-2020, and here, there is potential to treat mutant RAS cancers in combination with inhibitors of downstream RAS effector targets, including RAF, MEK, or ERK inhibitors as well as with direct inhibitors of mutant RAS).

Normally, I wouldn't give much attention to assets in preclinical stage, but we've already observed the increase in valuations in certain companies as a result of KRAS hype (Amgen with promising initial data presented at June, sympathy move for Mirati Therapeutics (MRTX)).

In regards to competition from the likes of Blueprint Medicines' avapritinib, it was noted that their ORR data looks better (22% versus 9% for repritnib) while Deciphera carries the advantage in terms of PFS benefit. The landscape is constantly evolving here, and it'll be interesting to see how it plays out over time (Blueprint does have the first mover advantage), especially as differentiation for repretinib continues to emerge with additional data.

A valuation comparison is suggestive of further upside for Deciphera, although I'll be the first to admit it's not an apples to apples comparison (Blueprint has deeper and more advanced pipeline, including differentiated RET inhibitor and other assets of interest).

As for institutional investors of note, major holders include OrbiMed Advisors, New Leaf Ventures, RedMile Group, Deerfield Management and others. History of insider selling does not inspire confidence.

To conclude, INVICTUS data has given us the element of derisking we look for in ROTY, and secondary offering has bolstered cash reserves (making further dilution unnecessary in the near to medium term). Recent data sets unveiled give us incrementally more confidence in ripretinib's prospects in other settings, such as second line GIST (benefits like increased duration of treatment continue emerge as points of potential differentiation). Furthermore, as stated above, targeted oncology continues to be an attractive space to operate in where consolidation via M&A is and will continue to be the norm.

For readers who are interested in the story and have done their due diligence, I suggest initiating a pilot position in the near term. From there, I'd only add to the position as strength, stability, and news flow provide the necessary confirmation.

Risks include disappointing data (including upcoming presentations), high bar being set by competition including Blueprint Medicines' avapritinib, setbacks in ongoing and planned studies, and negative regulatory feedback. After the recent capital raise, dilution in the near term appears unlikely. Also, keep in mind that repretinib failed to achieve one its key secondary objectives as ORR failed to reach statistical significance. Consider that for the INTRIGUE trial the bar is being set much higher (head to head against Sutent in GIST patients who failed only one treatment), although recent clinical results have likely added an element of derisking.

As for downside cushion and elements of derisking, cash position accounts for around 40% of current market capitalization and INVICTUS data unveiled so far gives additional cushion. Keep in mind there are about 6,000 addressable 4th line patients in US/EU/Japan markets.

For our purposes in ROTY, I plan to continue monitoring this one as additional data emerges so I can gain a better grasp of competitive landscape, including positioning as contrasted to avapritinib.

For readers who wish to take their biotech investing/trading efforts to the next level, I hope you'll check us out in ROTY (Runners of the Year).

ROTY is a 500+ member community of experienced biotech investors, profitable traders, industry veterans and novices. We are a tight knit group focused on the pursuit of profits, continuous improvement and generous sharing of due diligence & knowledge.