General Electric (GE) doesn't seem to be able to catch a break. Just after the industrial company released better-than-expected second quarter earnings last month that included a significant raise in free cash flow guidance this year, allegations of accounting fraud triggered a severe sell-off in the stock on Thursday of last week. I think GE's stock meltdown is highly exaggerated (and temporary), and I discuss how investors should react to the recent news.

Madoff whistleblower Harry Markopolos alleged last week that General Electric was engaging in a $38 billion accounting fraud related to its insurance business. You can read details about the allegations on a dedicated website (here) which makes the core claim that the industrial company essentially needs to shore up its insurance reserves.

Of the $29 Billion in new LTC [Long Term Care, Insurance Business] reserves that GE needs, $18.5 Billion requires cash immediately while the remaining $10.5 Billion is a non-cash GAAP charge which accounting rules require to be taken no later than 1QTR 2021. These impending losses will destroy GE’s balance sheet, debt ratios and likely also violate debt covenants. Unfortunately, GE has almost no cash, so they had to request special forbearance from the Kansas Insurance Department to be able to fund their January 2018 $15 Billion reserve increase over a 7-year time horizon, so the odds of them being able to fund $18.5 Billion in new cash reserves is doubtful. What’s even more doubtful is GE becoming cash flow positive in 2021 as management would have you believe.

Investors did not take kindly to the allegations and dumped the stock. At the end of Thursday, General Electric's stock was down more than 11 percent in one of the worst sell-offs in years. Today, General Electric is widely oversold based on the Relative Strength Index, which can be viewed as a contrarian "Buy" signal. 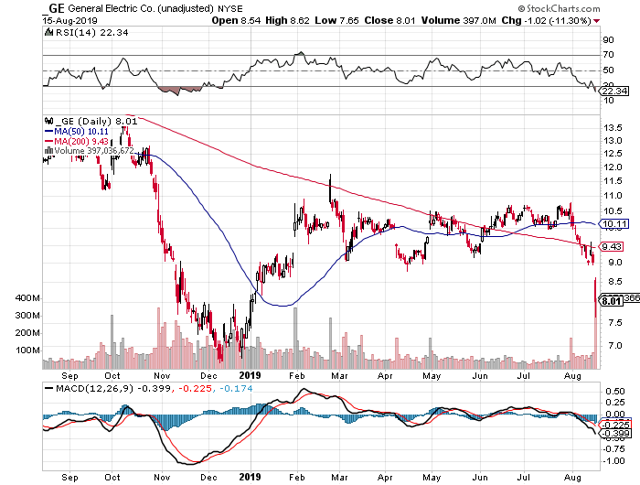 General Electric Is Already Under Investigation For Its Accounting Practices

General Electric issued a response on Thursday on its website, calling the accounting fraud allegations "meritless" and "unsubstantiated".

The claims made by Mr. Markopolos are meritless. The Company has never met, spoken to or had contact with Mr. Markopolos, and we are extremely disappointed that an individual with no direct knowledge of GE would choose to make such serious and unsubstantiated claims. GE operates at the highest level of integrity and stands behind its financial reporting. We remain focused on running our businesses every day, following the strategic path we have laid out.

Further, General Electric's CEO Larry Culp used the opportunity to demonstrate confidence in the industrial company and its value proposition by purchasing $2.0 million worth of GE shares during the sell-off. Larry Culp bought 252,200 shares for a weighted-average transaction price of $7.93. You can see the SEC filing here. Buying shares at times like this is the right signal to shareholders of the company that the senior officer at the company stands behind its accounting.

What To Do Now?

The most important thing is to not jump to any conclusions and sell your shares just because the report on GE made a lot of waves. Selling into the weakness because fear overtakes investors, in my opinion, almost always turns out to be a big mistake.

Investors also need to keep in mind that the report was written by people that have a financial interest in GE's share price declining. According to the disclosure section of the GE report:

Prior to the initial distribution of this Report on August 15, 2019, the Company entered into an agreement with a third-party entity to review an advanced copy of the Report in exchange for later-provided compensation. That compensation is based on a percentage of the profits resulting from the third-party entity’s positions in the securities, derivatives, and other financial instruments of, and/or relating to, General Electric Company (“GE”) (NYSE: GE). Those positions taken by the third-party entity are designed to generate profits should the price of GE securities decrease.

If you have a long position in GE, like I do, the best option in times of emotionally-fueled selling is often to do nothing at all. Let the storm pass and see how other analysts react to the news, which I would expect would come out to defend GE. The market reaction to the report is almost comical, in my view, and chances are that GE's stock price will recover over the coming weeks.

Insurance professionals, auditors, and regulators, including the SEC, have to figure out if GE has an under-reserving problem. If so, the company will have to shore up its reserves which will cost money. However, I doubt that the final outcome will be as negative as investors currently fear because the SEC is already looking into GE's accounting practices related to its insurance reserves for almost two years. Also, investors need to keep in mind that GE's CEO used the opportunity to gobble up a boatload of shares on the cheap and that the writers of the report have a financial interest in lowering GE's share price. Long GE.

Achilles Research
34.8K Followers
I am a dividend investor and look for undervalued investments in the stock market. I identify misunderstood and undervalued equity investments and hold those securities until their price approximates my estimate of intrinsic value. I am a long-term investor only. I am building a $100,000 high-yield income portfolio. I am running this portfolio as an experiment to see if long-term sustainable income can be generated from a diversified pool of high-risk, high-yield securities. I am willing to accept high risk in order to meet my performance goals.