AerCap (NYSE:AER)'s buyback strategy amid a depressed share price, predictable income stream and strong tailwinds has the potential to reward patient bulls with annual returns in excess of 14% annually over the next five years.

“The talent of the strategist is to identify the decisive point and to concentrate everything on it, removing forces from secondary fronts and ignoring lesser objectives.” - Carl Von Clausewitz.

In examining AerCap (AER), we choose to primarily focus on the last five years to see the effects of the AER buyback strategy. The chart below provides a snapshot of revenue, operating income and net income over this period. 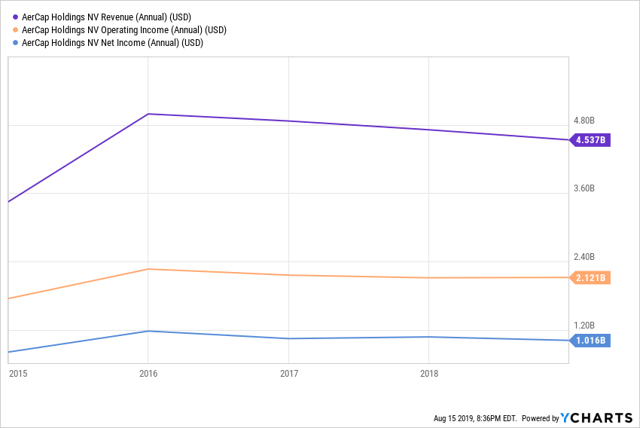 The business remained flat after a spike in revenue in 2014 which was due to an increase in earning assets. AER's operating income and net income fluctuated with a range of 1.17B in net income in 2014 to 1.01B in 2018. Based on this chart below, one may assume AER is dead money....but they'd be wrong. 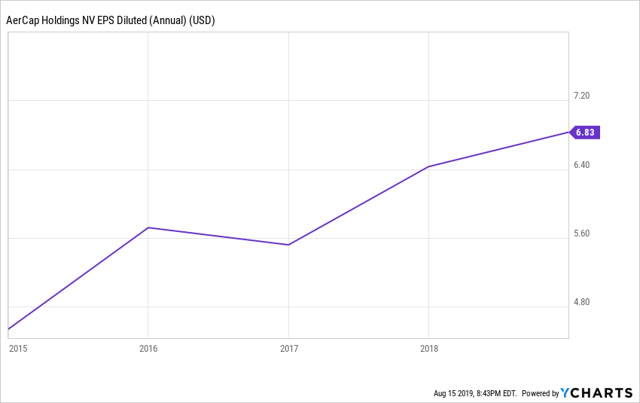 This chart displays earnings per diluted share over the same period. AER's EPS increased 50.4% from $4.54 to $6.83 over 5 years due to their buyback strategy. Following a growth in assets in 2014, AER began buying back shares, recognizing their shares were trading below their book value. While the book values of companies tend to be varied and could be far from reality, AER's book was backed by real assets, airplanes. AER management realized they could buyback shares, or portions of their airplanes, at a discount and thus increase the book value per share for shareholders.

"We are able to realize -- more then realize the book value in our older assets and fact typically you see this 18% gain. I would say that this is what gives us confidence that our book value is fully real, it's fully realizable and more." - Q2 Earnings Call, Peter Juhas, Chief Financial Officer. 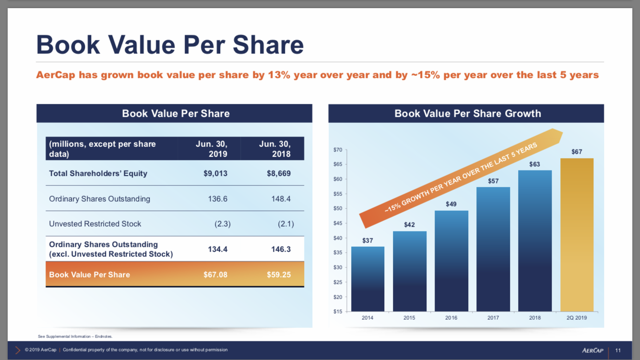 AER has a Baa3 credit rating from Moodys and ~29B in debt. AER's maturities are spread out and the closet obligations are 899m due in 2022 and a 2.156B payment due in 2023. AER then has a five year break, before 14.65B in 2028 with the remaining balances due in 2030 and beyond - see more here. While on face value these obligations seem high, they are backed by assets. 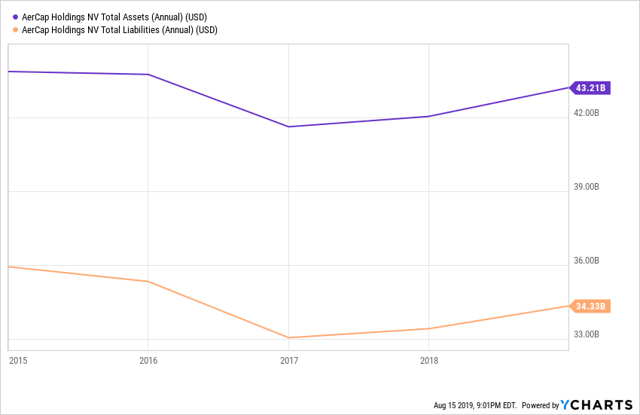 In the chart above, you can see AER's net debt vs. total asset value over the last five years. AER's debt levels remained within a 10% range as AER recycled older assets to fund the procurement of newer aircraft. In 2014, AER's fleet had an average age of 7.7 years and an average lease term of 5.7 years. As of the latest quarter, AER's feet had an average age of 6.2 years and a lease term of 7.4 years. AER's ability to reduce the age of its assets while increasing the term of their leases, without greatly increasing total debt, speaks to their world class asset management.

What about the Macro & the Moat?

Perhaps the greatest fear for potential AER shareholders is the threat of global recession. Logic follows that in a recession people will stop pursuing leisure activities and airlines will suffer, thus resulting in airline bankruptcy and an inability for AER to obtain leases for their assets. Yet, since 1987, air traffic has doubled every 15 years and is expected to double over the next 20 years. Growing economies in China, India and Brazil require air traffic to sustain growth and airlines will operate at a loss well before declaring bankruptcy. AER's business is not only poised to benefit from this tailwind, but is structured to lead the industry. In looking back, through the Great Recession and other world crises, AER maintained a fleet utilization between 97.7% and 99.5%.

AER's moat derives from their size. As the world's largest lessor, AER has 12% of the market, which remains fragmented. AER's lease term provides consistent and reliable earnings and is diversified across international carriers. AER is thus able to relay current market conditions in one region, forecast market conditions in another and shift the fleet as required.

"In an opaque market that volume of activity gives us tremendous information on advantages and knowledge about aircraft values, which we used to make intelligent decisions that create value for our shareholders." - Q2 Conference Call, Aengus Kelly, Chief Executive Officer.

AER's CEO Aengus Kelly has been with the company since 2011 and currently owns over 2M shares. Kelly is only 44 years old and has plenty of runway to continue the upward trajectory of the company. In fact, insiders within the company hold over 16.9M shares, over 10% of the float. Management's interest is financially aligned with shareholders.

We decided to model AER's buyback and corresponding share movement by modeling the data from the past five years. We acknowledge AER does have capital requirements for future aircraft purchases which may limit the amount available for buybacks at various times. That said, AER has consistently recycled (sold older aircraft) as they updated their fleet. We believe the baseline numbers provide a likely range for buybacks.

Assumptions: We assumed AER would purchase on average $200m worth of shares quarterly (they've actually averaged 227m quarterly since June 2015). This is easily covered by the predictable 1B of net income. We did not include share compensation in these numbers. We also assumed that the value of aircraft would remain steady given the long tailwinds previously mentioned. 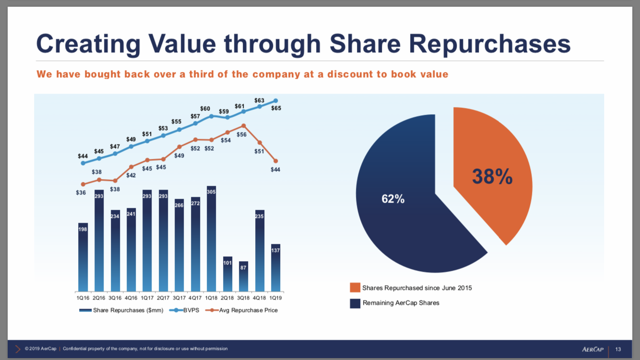 Looking at the chart above, we found AER share price traded on average at 85% of book value. We ran two models, the first applying the exact % of deviation between book and share price quarter over quarter and the second applied the average 85% book value. The results were within 1% of one another, demonstrating when buybacks are done at a persistent rate, the impact of the share price can be negligible. 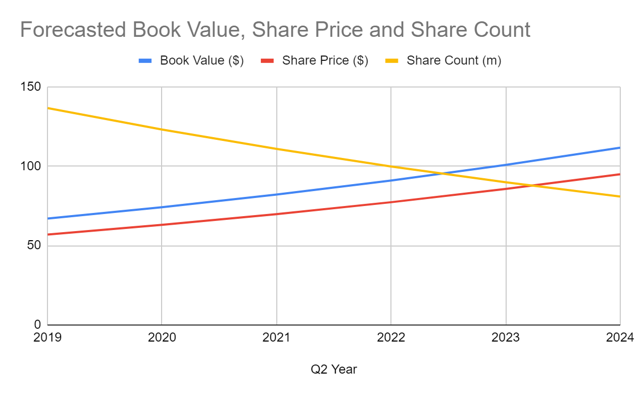 Thus far, we are only valuing AER in accordance to book value. Using the same metrics above, AER's 2024 EPS would be $11.99. We assess a P/E of 7.9 would be too low given consistent performance. We expect the market would reward the disciplined approach of management, recognize tailwinds and deliver a more reasonable 12-14 P/E (still below the P/FFO average for REITs - a different, but in ways similar asset class). This would command a stock price north of $140.

Let's pretend AER decided to pay shareholders a dividend rather than continue a buyback in 2025. If we assume a 75% payout ratio (similar to the present buyback ratio), this would provide an annual payout of $8.99 in 2025. A 7% yield would command a share price of $128. While a dividend doesn't make sense when AER trades at 85% of below book, it may be more beneficial to shareholders when AER begins trading above book.

Looking at downside potential, AER's previous utilization rate gives us confidence that management can weather a storm. Further, this is a company backed by real assets. The current 25% discount to book provides plenty of buffer.

Clausewitz believed the massing of forces against a decisive point in War would lead to victory. In examining AER, management has chosen share buybacks as a decisive point to drive shareholder value and has concentrated its masses on reducing the float. Given the alignment of management and shareholder interests, the predictable income stream from the airline lease business, a strong tailwind and the continued depressed valuation, we believe AER will offer patient bulls significant rewards over the next five years.

We are long AER and ODP. - Fog & Friction

FognFriction
49 Followers
I am an individual investor and primarily focused on value. My holdings are typically several years, although I am constantly checking my thesis. I will pursue growth opportunities if they are on sale. I decided to write on SA to better understand investment opportunities and to organize thoughts before making a decision. Additional Disclosure: The information contained herein is for informational purposes only. Nothing in this article should be taken as a solicitation to purchase or sell securities. Before buying or selling any stock you should do your own research and reach your own conclusion or consult a financial advisor. Investing includes risks, including loss of principal.

Disclosure: I am/we are long AER, ODP. I wrote this article myself, and it expresses my own opinions. I am not receiving compensation for it (other than from Seeking Alpha). I have no business relationship with any company whose stock is mentioned in this article.