Editor's note: Seeking Alpha is proud to welcome Patrick Kroneman as a new contributor. It's easy to become a Seeking Alpha contributor and earn money for your best investment ideas. Active contributors also get free access to SA Essential. Click here to find out more »

Since earlier this month, the boards of both CBS Corporation (CBS) and Viacom (NASDAQ:VIA-OLD, NASDAQ:VIAB) finally decided on the terms of re-merging the two companies. This merger provides a change for CBS shareholders to get Viacom at a discount and achieve cost savings. The new company should perform well in the new media landscape. Since the Redstone family has 80% of both companies voting power via National Amusements, the deal seems set.

Ever since parties such as Netflix (NFLX) and YouTube (GOOG) busted on to the scene, the delivery method has changed significantly. Content is widely available to watch when you want it and where you want it. This has severely reduced the moats of media companies by reducing the power of attracting a lot of views to a limited series of channels with predefined content. This has shifted the balance more to the content side and reduced the distribution power of the traditional channels, even if for now the first movers advantage of OTT platforms gives a temporary edge. For Viacom, for example, this means that viewers who want to watch music videos, don't have to watch MTV and wait until a song they like comes on, but can just seek them out on YouTube. I guess that's why MTV stopped broadcasting music...

Regarding films and TV shows, Netflix has been incredibly successful is scaling up this over the top delivery of content. They did this mainly using third-party content and the "Old Giants" took notice of this. So now content creators such as Disney (DIS) have been pulling content and started creating their own OTT platforms. To counter this, Netflix, Amazon (AMZN), Facebook (FB) and the likes have started creating their own content en masse. So the old is moving to the new and vice versa. This will further erode the power of distribution and place it even more on the content side of things. I've heard it being called the streaming wars, but at least to me, it will be all about content. Even though the current investments in content might result in a content glut and a lot of shows being of sub par quality.

Given that these changes require huge sums of capital, a wave of M&A in the media space happened such as take over of Fox by Disney and Warner by AT&T (T). With the fact that the competition is getting bigger, CBS and Viacom decided that the combined company would be more of a player than the two apart, and would boost CBS All-Access and Showtime.

A look at CBS and Viacom

CBS is a media conglomerate operating primarily in the U.S. CBS' television assets include the CBS television network, 30 local TV stations, and 50% of CW, a joint venture between CBS and Time Warner. The company also owns Showtime and Simon & Schuster.

When looking at the revenues of both companies over the last 10 years, they fluctuate both at max ~15% a year, but overall they are rather constant. Viacom has yearly revenues between $12.5B and $14.9B. CBS has them between $13B and $15.2B. However, Viacom seems to be in a multiyear downtrend, where CBS is on the upside. When you adjust for inflation, both companies are down in revenue compared to 10 years ago. Operating margins for both are rather similar at around 20%. For Viacom, these were better in the first half of the decade with operating margins over 25%.

But what really stands out for me is that the free cash flows for Viacom are significantly better than those of CBS. Given that the movie business is renowned for being choppy due to box office bombs and the likes, I find this rather surprising. Since FCF is what usable for growing the business and rewarding shareholders, I'd place, purely on an FCF basis, a higher value on Viacom. Of course, there are more things to factor in. Arguably, CBS has the better brand power being one of the Big Three broadcast television networks. One thing that does stand out for both is that the huge reduction of share count for both hasn't helped the share price.

Comparing both by liabilities should give us some further insights. 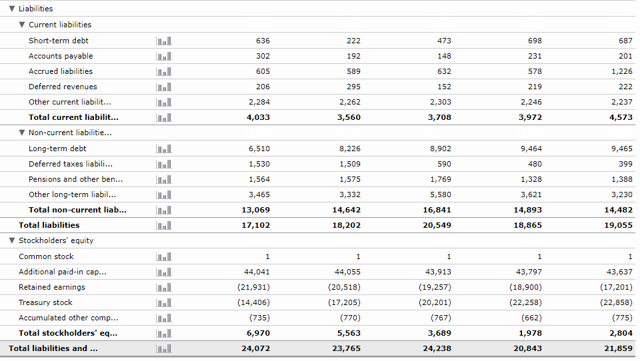 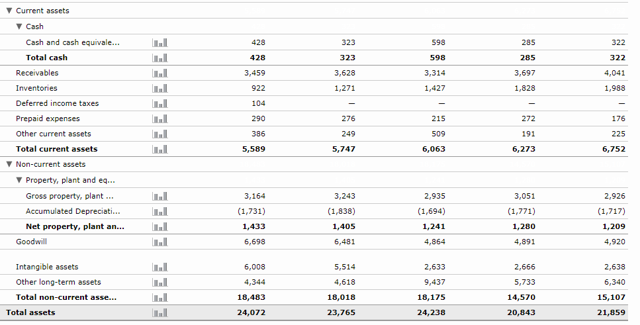 Again, we see the build up of treasury stock that's reducing equity and has boasted ROE metrics. Long-term debt has risen by ~40% in these five years, which resulted in a debt/equity ratio of 3.38 as of 12-2018. Given the amount of treasury stock I don't find it that much of a deal. The $1.4B pension liability could balloon quickly if a recession would hit.

As would be expected, a lot of the assets consist of goodwill and intangibles. 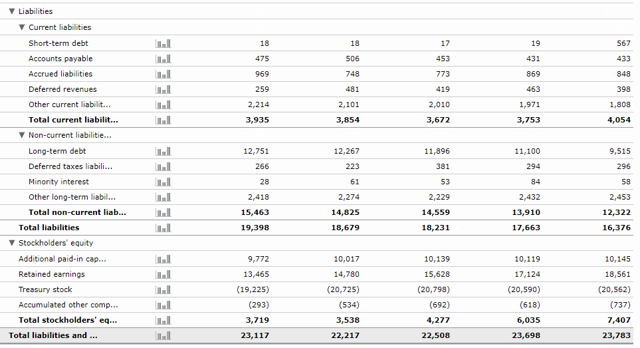 Given that the fiscal years for both companies differ, it might distort a bit. For the picture it paints, I don't think it matters that much.

Where CBS kept on reducing its share count, Viacom shored up its balance sheet. Reducing long-term debt by over $3B and effectively doubling it's equity. Given that almost half of the balance sheet consist of goodwill, I think that's a good thing.

After looking at both balance sheets, I'd place a higher value on Viacom. The market clearly does not. At the time of the announcement CBS had a market cap of about $18B, Viacom was valued a third less at $12B. These caps were to a large extent related to the ratio agreed upon in 2018 of 0.6135 of CBS shares per Viacom share.

The merger to ViacomCBS

First of all, they should fire the exec who came up with that name. Now that's that out of the way: On Aug. 13, the two companies agreed to re-merge to become ViacomCBS and hope to close before the end of the year. However, the exchange has changed compared to 2018. Now Viacom shareholders get 0.59625 of CBS shares per share. This effectively means that Viacom shareholders will own 39% of the merged entity and the other 61% goes to the current CBS owners. The prospective value of ViacomCBS would be between $28B and $30B.

This was a discount to the share price of Viacom. Was this warranted? Put differently: Is Viacom worth more than a ~6.7x EV/EBITDA? Given the Les Moonves debacle and the fact that Viacom has further improved it's balance sheet since last year (reducing debt by a further $1B), I'd say so. Bringing in a healthier balance sheet and bigger cash flows would advocate a higher ratio. That management didn't negotiate this looks like poor governance. From a majority owner's point of view, such as the Redstones, it'a advantageous by causing less dilution of their holdings. So for Viacom minority shareholders, I don't like the deal, but this makes going long CBS more appealing.

So what will ViacomCBS bring to the battle compared to the separate entities? First are the expected synergies of $500m to be gained within two years after closing. But what's more important is the $13B that's available to be spent on content creation and the ability to pursue more M&A activity. And M&A seems to be on the agenda:

We would want to look at something after that to ... develop more scale as we move forward. - Shari Redstone

Since the new company will have a market cap of about $30B, taking the pricing of the shares at the announcement, it will still be a much smaller beast compared to the likes of Disney, AT&T and Netflix - let alone comparing it to Amazon, Apple (AAPL) and Alphabet. So by acquiring other companies, this gap can be partially closed. Let's take a look at some prime targets:

The most prominent suspect to be bought is Starz from Lionsgate (LGF.A). Given that CBS already offered $5B, it seems like the first expansion of ViacomCBS for its content library. Since John Malone has a sizable stake in Lionsgate, I'd think a further merger with Liberty Global (LBTYA) would really add firepower. That seems unlikely, however.

Another takeover candidate might be Discovery Inc. (DISCA), which holds channels such as the Discovery Channel, Animal Planet and the Travel Channel. In Europe it also holds Eurosport, which has the rights to broadcast numerous sporting events across the continent. This question here is if Discovery Inc. has the content which you want to pay top dollar for in the streaming space.

A third possibility is the entertainment division of Sony (SNE), which possesses assets such as Colombia Pictures and a large record division. Daniel Loeb of Third Point Management currently is trying to shake things up within Sony and the question is whether or not a sale or a spin out of Sony Entertainment is realistic. Also, it's questionable if adding another movie studio is desirable at this moment for ViacomCBS.

A final target I'd like to mention is AMC Networks (AMCX). This would add a slate of shows such as "The Walking Dead" and "Breaking Bad" to the mix. Given that the company is currently valued at $2.8B, it would be a nice bolt-on. But I don't think it's an acquisition that would tip the scale. The main reason I would buy it is because it adds "tested" content and immediately add to the cash flow. For the market cap plus a premium this might be a better bet than spend billions on new content, which might not be a hit.

The re-merger of CBS and Viacom has seemed for years as a given. Now it's finally happening. Looking at the years to come, it gives the new company the necessary firepower to grow and produce new content. Buying CBS seems like the way to pursue this event because you get Viacom at a discount. Getting a low capex-intensive business at a bit above six times P/FCF is far from bad. So, if you want to play this situation, definitely go long CBS.

For Viacom shareholders, the ratio is arguably short of satisfactory. The reaction from the Street to the merger is mixed, but to some extent negligible. The two companies are de facto subsidiaries and sister companies under National Amusements. The merger does add cost savings and firepower, which seems likely to be used for further acquisitions. This will make ViacomCBS a viable player in the media landscape and a good stock to bet on.

Patrick Kroneman
747 Followers
Writing in a personal capacity, I'm a longtime investment professional. Have worked as an investment advisor for a global bank, an investment analyst for a mulitbillion fund and currently working in European Venture Capital.
Follow

Disclosure: I am/we are long GOOG, T, DIS, AAPL. I wrote this article myself, and it expresses my own opinions. I am not receiving compensation for it (other than from Seeking Alpha). I have no business relationship with any company whose stock is mentioned in this article.