Bandwidth Inc. (NASDAQ:BAND) is a player in Communications Platform as a Service (CPaaS), a fancy name for cloud-based communications middleware for system software developers. CPaaS vendors typically offer APIs and other programmable components for voice, messaging and other communications apps. According to Gartner, CPaaS is a high-growth market:

With end-user spending on cPaaS expected to grow at a compound annual growth rate (CAGR) of nearly 50% between 2016 and 2021; this market is experiencing a "gold rush"…

The stock has been handily outpacing the Invesco Dynamic Software ETF (PSJ) the last two weeks and Bandwidth's stock price is near an all-time high suggesting that there may be more bullish action to come.

Bandwidth’s fundamentals are not as strong as some digital transformation stocks. The company certainly isn’t achieving 50% annual revenue growth and doesn’t have positive free cash flow. However, Bandwidth does have some unique characteristics that other CPaaS players don’t have, including APIs for 911 access and its own network infrastructure in the USA.

Bandwidth is not only a CPaaS vendor but has the “scale, quality, reliability and cost advantage of a network infrastructure owner.”

Bandwidth is in process of building up a network infrastructure in the UK and Europe. Operations in Europe should be ready to go by year-end.

Given the growth potential of the CPaaS market, Bandwidth’s unique offering and a bullish stock price, I am giving Bandwidth a speculative buy rating.

There are several risks to this investment, however. The company has several ongoing lawsuits with state and local governments alleging underpayment of 911 taxes and surcharges. European operations will soon be launched but are beset by many local regulations and Brexit may also cause complications. Finally, the company’s revenue is concentrated in a limited number of enterprise customers.

Some of the more significant logos are shown below.

I determine stock valuation on a relative basis by comparing sales multiples and sales growth to the company's peers. I believe that high-growth companies should be more highly valued than slow-growth companies. After all, growth is a prime factor in valuation models such as DCF. Higher future growth results in higher valuation and, therefore, higher EV/sales multiple.

To illustrate this point, I created a scatter plot of enterprise value/forward sales versus estimated YoY sales growth for the 82 stocks in my digital transformation stock universe. 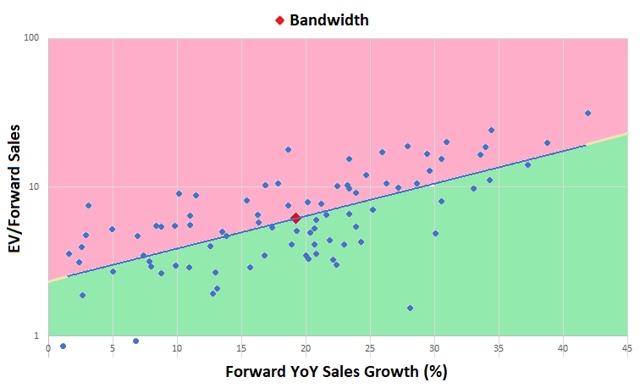 As can be seen from this scatter plot, Bandwidth is sitting on the trendline, suggesting that its forward sales multiple is similar to its peers', given its estimated future revenue growth rate. My interpretation is that Bandwidth is fairly valued relative to the average stock in my digital transformation universe.

High-growth companies generally sacrifice profits for growth, and traditional value factors such as P/E ratio are not meaningful. Therefore, I focus on other metrics such as the "Rule of 40," free cash flow margin, and cash burn to evaluate software companies.

Note that it is listed in the Communication Services sector by GICS, not in the software industry. Although I am analyzing the fundamentals using the Rule of 40, the results should be taken with a grain of salt.

There are several different ways of calculating the Rule of 40:

Growth - The standard growth metric is to use the Annual Recurring Revenue (ARR) growth rate. For my Rule of 40 calculation, I use percentage sales growth TTM. There are three reasons for this: (1) ARR is not always available, (2) most SaaS companies grow not only organically but also by acquisition, and (3) many companies are in the middle of a transformation to SaaS and have a significant amount of product sales.

Bandwidth’s free cash flow margin TTM is -8% for the most recent 12-month period, down from +9% one year ago.

Rule Of 40 Applied To Bandwidth

Bandwidth's YoY revenue growth was 19%, while free cash flow margin for the trailing 12 months was -8%. Therefore:

Since the Rule of 40 calculation comes out substantially below 40%, I conclude that the company has work to do to bring growth and profitability into balance.

As an investor, one wants to make sure that if a company doesn't score well on the Rule of 40, it is at least not burning cash.

In the case of Bandwidth, the SG&A expense is 51% of the total revenues which is quite reasonable for a high growth company. 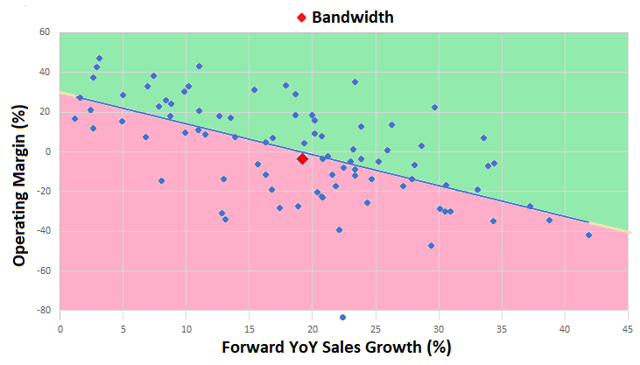 This view shows the combined effect of the gross margin and SG&A expense margin. In the case of Bandwidth, the operating margin is slightly below the trendline, suggesting that cash burn is modestly higher than its peers.

Bandwidth plans on completing the European infrastructure by the end of the year and presumably start operating. However, there are complications with the European environment as stated in the annual report:

"… in order to procure, distribute and retain telephone numbers in the EU, we will be required to register with the local telecommunications regulatory authorities, some of which have been increasingly monitoring and regulating the categories of phone numbers that are eligible for provisioning to our customers. We are in the process of registering in various countries in which we do business, but in some countries, the regulatory regime around provisioning of phone numbers is unclear, subject to change over time, and sometimes may conflict from jurisdiction to jurisdiction. Furthermore, these regulations and governments’ approach to their enforcement, as well as our products and services, are still evolving and we may be unable to maintain compliance with applicable regulations, or enforce compliance by our customers, on a timely basis or without significant cost. Also, compliance with these types of regulation may require changes in products or business practices that result in reduced revenue."

Brexit is another factor that may complicate or delay operations in the UK and EU.

In the USA, Bandwidth is the defendant in many state and local government lawsuits alleging underpayment of 911 taxes and surcharges. Bandwidth has had most lawsuits dismissed, but there was one dismissal that was overturned and there are several allegations outstanding.

Bandwidth doesn’t have a channel partner program and relies on a direct sales force. And according to Gartner, Bandwidth does not have a large and engaged developer ecosystem. These items may hinder the company’s growth.

Bandwidth has had greater than 20% share dilution YoY. Hopefully, this is not setting a pattern for the future. 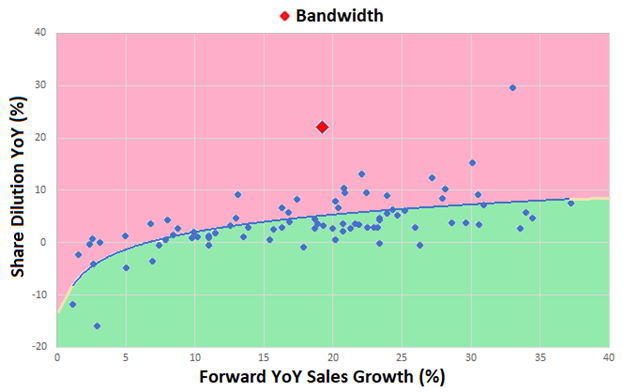 Bandwidth operates in the CPaaS industry which consists of cloud-based communications middleware including APIs and other programmable components for software developers. CPaaS is a high-growth market with expected revenue growth of nearly 50% for the next few years.

Bandwidth is unique in the CPaaS industry because it is the only vendor to offer 911 APIs and also because it operates its own voice and messaging network in the United States. The company is building out its network infrastructure in the EU and UK, but this is complicated by local regulations and Brexit.

With 19% YoY revenue growth, Bandwidth doesn't compare with overachievers such as Twilio (TWLO). Bandwidth also has a negative free cash flow for the most recent twelve months. The stock price is fairly valued relative to its peers. Because the stock is near all-time highs and looks to be headed higher and Bandwidth is operating in a high growth industry, I am giving this company a speculative buy rating.

I have been trading stocks, commodities, and options for more than 25 years. I have honed my skills in quantitative analysis and various stock investment tools for 15 years at Portfolio123 and offer services as a consultant in stock portfolios. I also own the financial data service Equity Analytx which provides aggregated fundamentals for a wide range of industries.