Emerging market equity returns are now hovering around zero for the year. The FTSE 100 in the United Kingdom, IBEX 35 in Spain, and the Hang Seng in Hong Kong are doing the same. The S&P 500 (NYSEARCA:SPY) is up nearly 18%, including reinvested dividends. The Nasdaq (QQQ) is up 20%. This continues a trend that we have seen over the past decade. Equity returns in the United States have greatly outpaced the rest of the world. This article tries to put that long-run outperformance in a historical context for readers.

The graph below shows the cumulative performance of the S&P 500 versus the MSCI World Index ex-USA (NASDAQ:ACWX). Through the end of 2009, the two indices had roughly equivalent returns, but U.S. stocks have dramatically outperformed the global index over the past decade. 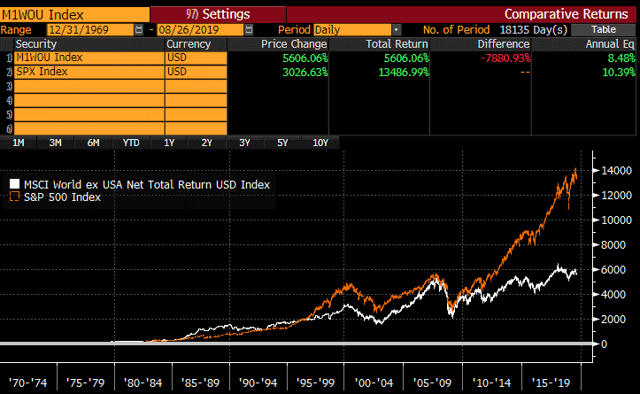 The U.S. has outpaced its global counterparts over recent periods, but the scope of this outperformance is difficult to see solely with a very long cumulative return series. In this article, I took the monthly returns of the two indices and captured rolling ten year returns. By using ten-year returns, I hope to put the outperformance by the U.S. market in this expansion into a broader context.

The graph below shows rolling 10-year returns from 1979 to current. Outside of the late 1990s tech boom, the current run for U.S. stocks is the best since on record. The return differentials shown here are in annualized terms. For example, the S&P 500 produced 14.02% annualized returns from August 2009 through July 2019 while the MSCI World ex-US Index returned just 5.66% annualized. The last data point on this line graph is then the 8.36% return differential per annum over the trailing ten years. 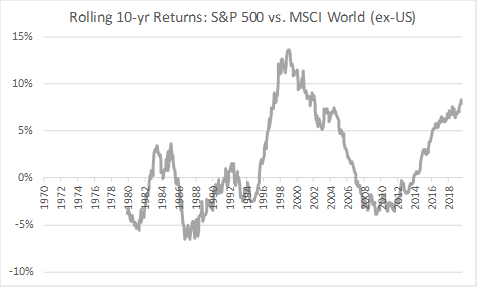 The best ten-year period for U.S. stocks versus the rest of the world was the period ending in February 1999. The inflation of the tech bubble had pushed U.S. returns to 18.8% annualized returns. The Asian Financial Crisis in 1997 and Russian default in 1998 had weighed on global assets, which had posted just a 5.1% total return over that period. This 13.7% annual outperformace for U.S. stocks over ten years is the strongest in the dataset.

The worst ten-year period for U.S. stocks relative to the rest of the world was the decade ending in April 1987. Over that decade period, the U.S. had produced a very strong 16.8% annualized return, but the rest of the world - powered by the fast-rising Japanese markets - had returned 23.4%. The U.S. lagged by 6.6% per annum.

The current 8.4% annual outperformance over the last decade is better than any relative ten year outperformance by global stocks in this long dataset, including the 1980s experience. U.S. stocks have rallied impressively versus global stocks in the post-crisis era, but this relative rally is not unprecedented in this long dataset. As we saw in the late 1990s, domestic valuations can certainly expand further. Like that experience, part of the relative gains by U.S. stocks in this cycle have been driven by Silicon Valley firms, a distinctive American advantage versus the rest of the world.

I hope this article helps frame the relative trailing returns of the U.S. market versus international peers. I know it helped me put this relative rally into a historical context. With U.S. and global stocks under pressure from the global trade war, domestic investors with a long-term horizon may look for global opportunities to buy underperforming global stocks. I have burned my fingers a few times diversifying globally to see the international allocation of my portfolio underperform as money continues to flock to U.S. assets. We have seen more extreme periods before, but this decade-long outperformance has become more impressive with time. Trees do not grow to the sky; however, and prolonged outperformance by U.S. assets has limits that domestic-focused investors should consider.

My articles may contain statements and projections that are forward-looking in nature, and therefore inherently subject to numerous risks, uncertainties and assumptions. While my articles focus on generating long-term, risk-adjusted returns, investment decisions necessarily involve the risk of loss of principal. Individual investor circumstances vary significantly, and information gleaned from my articles should be applied to your own unique investment situation, objectives, risk tolerance and investment horizon.

Ploutos
21.12K Followers
Institutional investment manager authoring on a variety of topics that pique my interest, and could further discourse in this online community. I hold an MBA from the University of Chicago, and have earned the CFA designation. My articles may contain statements and projections that are forward-looking in nature, and therefore inherently subject to numerous risks, uncertainties and assumptions. While my articles focus on generating long-term risk-adjusted returns, investment decisions necessarily involve the risk of loss of principal. Individual investor circumstances vary significantly, and information gleaned from my articles should be applied to your own unique investment situation, objectives, risk tolerance, and investment horizon.