One of the S&P 500's niches that we are talking to clients about in preparation for the next inevitable bear market is the 1990s "growth babies," or the large-cap growth and Tech leadership which led that historic bull market, particularly in the last half of the 1990s, but have lagged since that time and are being forced to transform their business models.

Intel (NASDAQ:INTC) was obviously one of the late 1990s leadership stocks, with its 80-90% microprocessor market share and the use of Intel chips in the vast majority of PCs in the '80s and 90s, but has lagged materially since the peak in 2000.

Intel has a ways to go to surpass its September 2000 high of $75-76 per share, but it's still building a long-term technical base as it reconfigures the business model for the next 20 years.

Manufacturers have a particular disadvantage to many other businesses in a service economy, since service businesses don't have the significant reinvestment risk that a manufacturer does. It could be said that Intel's reinvestment risk is even greater than, say, your typical industrial manufacturer, since the life cycles within technology and "Moore's Law" are so much faster within Tech than, say, other basic industries (and my guess is there will be an argument about that, but readers likely get the point).

In early 2000, the peak of the Tech and large-cap growth bubble, stock prices started to discount the end of the PC / server era and what was up until that point the secular build-out of corporate technology (i.e., the PC, networks, etc.) and the looming ascension of a reinvigorated Apple (AAPL).

Apple is a great example of "tech transformation": it was a company that was a high-end niche PC designer for what was then the printing and graphics industry with 2-3% market share for most of the 1990s, and Steve Jobs completely transformed Apple and the Technology business with the iPhone.

The problem for Intel is that the core PC business, which was 54% of the company's revenue and 80% of its operating income in the June 30 '19 quarter, is now a low-single digit unit grower (PCs, that is), as the emergence of the Cloud has made PCs much like the old desktop shells of the early 1980s, where your desk device was used to simply pull data from what was then a mainframe.

Looking at Intel by segment

Here is the y/y growth of those segments:

After healthy earnings and revenue growth in the last two years, growth has slowed for Intel in 2019, and possibly through 2020 and 2021.

By comparison, when I stopped modeling Texas Instruments (TXN) in the 2nd half 2017, here is what its numbers looked like, ending with June 30, 2017:

What's fascinating about Texas Instruments is that in the early 2000s, shortly after the Tech bubble popped, and even the late 1990s, "capex" was anywhere between 40% and 60% of Texas Instruments' cash flow.

What Texas Instruments did (I think, and not being a sell-side analyst, the transformation has had to be pieced together over the years) is that it focused on analog and some of the less "capital-intensive" businesses within chips and semiconductors, dramatically reduced its capex from 2000 through 2009, and then maintained that level for much of the last decade. 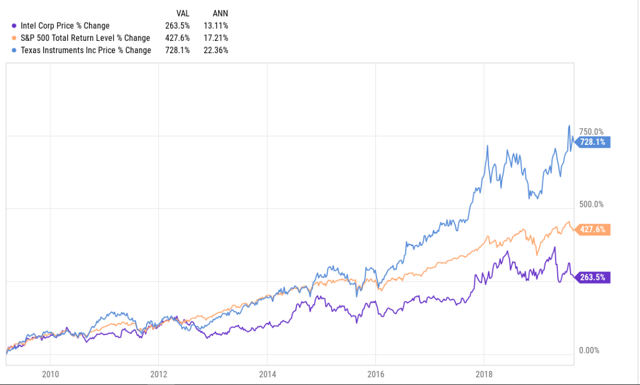 Although not shown here, in the article is that Texan Instruments' cash flow and free cash flow were greater than net income for a good chunk of that period, which speaks to the quality of its earnings.

The most compelling valuation metrics for Intel are the 7% free cash flow yield and the very low expected growth rates for EPS and revenue.

So, where does that leave Intel today?

Over the past few years, I've used Morningstar research more and more on individual companies to get the bigger perspective, and when assessing Intel and its core and emerging businesses, Morningstar assumes low-single digit negative revenue growth for the CCG (core PC and computing group) but faster growth for the Data Center Group over the next 5 years. Like so many growth companies from the late 1990s, readers are seeing a "transformation" of Intel's core PC and computing model into Cloud and auto and other emerging chip and semi segments, but Intel's low-cost, high-end fabs are still firmly rooted in the PC biz.

And like so many other growth giants of the 1990s (Intel, Oracle (ORCL), Cisco (CSCO), etc.), what was once a remarkable competitive strength (fabs which gave Intel its low-cost microprocessor production advantage) is now a return-sagging weakness, as the PC business is thought to be in secular decline.

Intel lost some ground in 10nm (nanometer) and gave a long-time laggard like AMD a chance to gain market share, so Morningstar is talking about the importance of 7nm and Intel getting it right.

Intel's acquisition of firms like Altera and Mobileye seemed to me to be what Cisco and Oracle have done with their acquisitions: adding bolt-on acquisitions of niche players within and around their core expertise (like Altera was) or emerging players like Mobileye, and my own hope is that Intel would continue to do this, although for a lower-PC manufacturer, stock-for-stock acquisitions like Oracle can do become harder at a lower multiple.

Readers may wonder, "Why write about a chronic underperformer like an Intel?" - but the harsh lesson learned after the March 2000 large-cap growth and Tech peak is that laggards can become leaders after index growth disappears, from a "relative growth" perspective. As the old saying goes, "the first become last and the last first," and that applies to more than spiritual principles.

If you look at the 1990s Growth and Tech leadership, it's understandable that Microsoft and Oracle were the first two "growth babies" of the period to take out their March-September 2000 highs, although Oracle continues to struggle with the Cloud and that business model transformation.

For one client, we still remain long a core Intel position with a cost basis of $19 per share from January 1998. The stock is undervalued here, probably by at least 25%, but if it trades back to the low $60s, it would again be fully valued.

Readers might better off trading Intel than buying and holding it, or at least keeping the position a smaller size until that 2000 high is surpassed - and that could be years away. The dividend is constrained thanks to capex, but it looks good today - relative to the 10-year Treasury yield - with a 2.75% current yield.

Brian Gilmartin, CFA
9.08K Followers
Brian Gilmartin, is a portfolio manager at Trinity Asset Management, a firm he founded in May, 1995, catering to individual investors and institutions that werent getting the attention and service deserved, from larger firms. Brian started in the business as a fixed-income / credit analyst, with a Chicago broker-dealer, and then worked at Stein Roe & Farnham in Chicago, from 1992 - 1995, before striking out on his own and managing equity and balanced accounts for clients. Brian has a BSBA (Finance) from Xavier University, Cincinnati, Ohio, (1982) and an MBA (Finance) from Loyola University, Chicago, January, 1985. The CFA was awarded in 1994. Brian has been fortunate enough to write for the TheStreet.com from 2000 to 2012, and then the WallStreet AllStars from August 2011, to Spring, 2012. Brian also wrote for Minyanville.com, and has been quoted in numerous publications including the Wall Street Journal.
Follow