Nova is a profitable company operating with strong margins and low debt levels. Nova’s profit margin is 18% and its return on equity is 16%. The company’s total liabilities is only 21% of its total asset value and its working capital is strong with a current ratio of 6.3 (meaning that the company can easily pay its bills using its cash reserves and short-term deposits).

The chart below visually shows Nova’s revenue and earnings trend over the last decade along with the next two years of consensus forecasts.

As the above chart shows, Nova’s revenue has increased over the last decade. The forecasts indicate that the company’s revenue is expected to drop in 2019 before recovering in 2020. Nova’s earnings have generally trended higher from 2009 to 2018, but the company’s earnings did slump in 2012 and growth remained subdued until 2017. Nova’s earnings for 2019 are expected to drop in line with its revenue forecast before recovering in 2020.

According to reports, the global demand for semiconductors is expected to decline by around 7% in 2019. The decline has been blamed on various factors such as the U.S.-China trade dispute, Brexit and weak smartphone demand. This will adversely affect Nova’s revenue and earnings for 2019 and this is reflected in the analyst forecasts.

However, the decline in semiconductor demand for 2019 is not as bad as it seems. The demand for semiconductors was strong during 2017 and 2018 with increases of 21.6% and 13.7%, respectively. This strength is reflected in Nova’s revenue growth spurt for those two years (which can be readily observed on the above revenue and earnings chart). In fact, the company’s revenue forecast of $216 million for 2019 is still 32% higher than its 2016 revenue of $164 million.

The demand for semiconductors is cyclical and investors need to be aware of this. In fact, the demand when plotted on a chart resembles a stock index like the S&P 500 (with a never ending sequence of rallies and declines). The chart below is from WSTS (World Semiconductor Trade Statistics) taken from the semiconductors.org article. 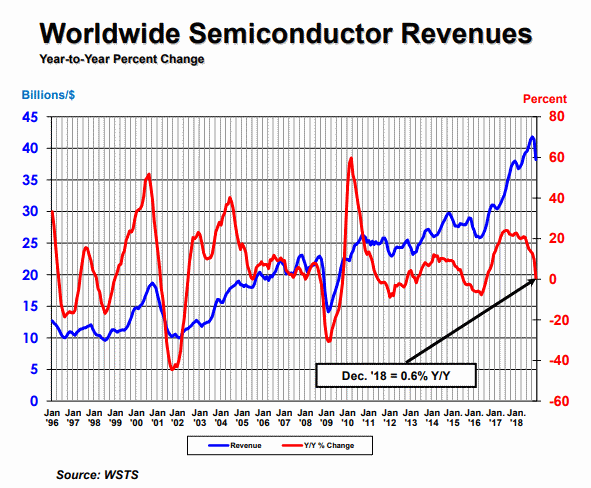 Examining the above chart shows that the Semiconductor expenditure (blue line) generally trends higher over the years, but the increases are not uniform. The Red line shows the Percent change which ranges from increases of 20% and higher to declines of 20% and lower. This cycles from growth to decline every three to five years and supports the statement I made above that investors need to be prepared for cycles in semiconductor demand. These cycles directly impact Nova, causing dips in the company's revenue and earnings trend. From the WSTS chart the previous declines occurred in 2016 and 2012.

Another observation from the WSTS chart is that the duration of these declines are quite short at around one year before demand picks up again. This is evident by the short amount of time the Percent change (Red line) stays below zero percent. The good news here is that the current decline would likely be over by the next year. This is supported by the forecasts for semiconductor demand which expect a recovery in 2020, and this also is factored into the analysts’ revenue and earnings forecasts for Nova in 2020.

We expect that the current soft demand will be better optimized through 2020 when memory prices and inventory levels will improve.

I share the CEOs view as I think the demand will resume next year (if for no other reason than its strong cyclic history as evident by the WSTS chart). Over the longer term I think Nova’s strong historical growth will continue until the next cyclic downturn in semiconductor demand. This is the nature of investing in a cyclical stock like Nova.

Nova has a history of strong growth with its revenue increasing 23% per year and its earnings increasing at an average rate of 35% per year.

A forward PEG of 0.5 is cheap for a growth stock as most growth stocks have forward PEGs in the 1.5 to 2.5 range. However, Nova’s earnings are expected to drop in 2019 due to a drop in semiconductor demand before recovering in 2020.

As an active investor I personally like to determine some likely price targets. This gives me a feel for how high the stock price could go in the short term and how soon it could get there. 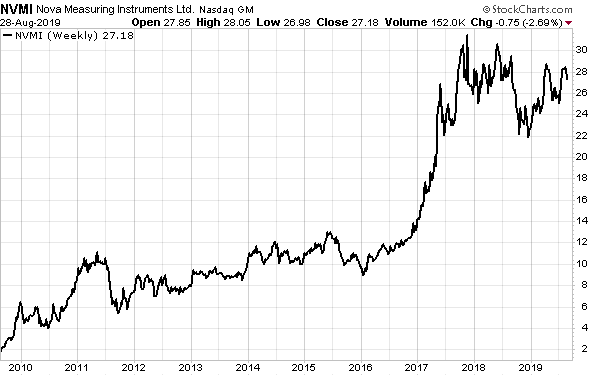 Over the last decade Nova’s stock price initially traded higher to peak in 2011. From there the stock traded up slowly until the end of 2016 before surging higher in 2017. The stock then spent 2018 pulling back before rallying in 2019.

From here I think the stock will trade up slowly in the short term due to the drop in semiconductor demand for 2019. Once demand picks up again the stock could surge higher again like it did in 2017, but for this to happen I think that Nova would need to produce some strong earnings results.

Nova is a profitable company with a solid track record of growth and operates with strong margins and low debt levels. Nova provides measuring equipment used in the manufacture of semiconductors. This makes the company’s revenue and earnings sensitive to the demand for semiconductors, which is cyclical. Every three to five years demand declines, but the declines tend to be limited to one year before recovering.

The stock is reasonably priced with a forward PE of 15.4x. However, Nova’s forward PEG of 0.5 is cheap, but the company’s revenue and earnings are expected to decline in 2019 before recovering in 2020.

The stock is cyclical, but over the longer term I think Nova will continue to grow. The stock is reasonably priced and I think it would make a sound long-tern investment for investors willing to ride out the current weakness in semiconductor demand.

Kurt Pollet
673 Followers
Kurt Pollet has been involved in the stock market since 1986 and this long-term experience provides a broad perspective of the stock market and its performance. He operates the website stockinvesting.today and produces a newsletter that provides market analysis, strategies and stock picks.
Follow