A few days ago, the second revision to Q2 GDP gave us our first look at corporate profits for the quarter. My preferred measure of profits is after-tax, with adjustments for inventory valuation and capital consumption allowances, as calculated in the National Income and Product Accounts (NIPA). As Art Laffer is fond of saying, this represents "true economic profits, and it is a consistent measure that goes back a long time. On that basis, second quarter profits rose 5.1% from first quarter profits, but for the year ended June '19, profits were up only a modest 2.7%. Over the past 5 years, profits have grown at an annualized pace of just 1.9%. Not very impressive, right? Well, not exactly. Here's some context which puts profits in a more attractive light: 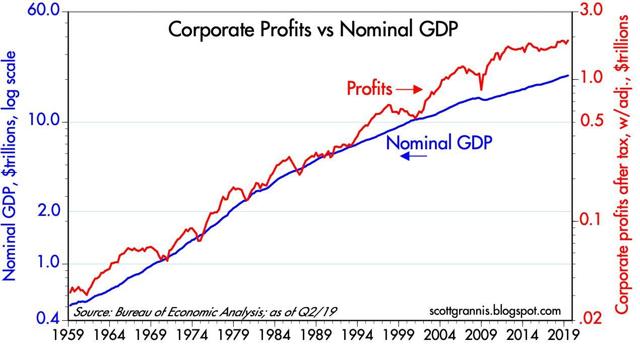 Chart #1 shows 60 years of corporate profits compared to nominal GDP. Note that the y-axes are both plotted using a semi-log scale, and both are scaled identically (i.e., the top value is 150 times the bottom value). Lines plotted thusly have an identical slope if their growth rates are also identical. What stands out here is that corporate profits have handily outpaced nominal GDP growth since 2001. 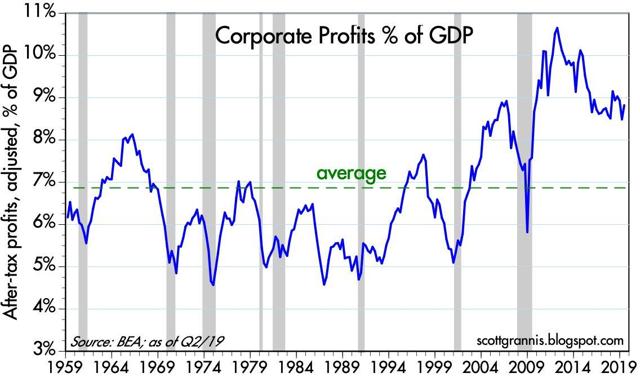 Chart #2 uses the same data as #1, dividing profits by GDP. From 1959 through 2001, profits averaged a about 6.1% of GDP, and they were mean-reverting around that value. Since 2001, however, they have averaged 8.7%, with no signs of a mean reversion to 6%. In short, corporations these days are generating profits on a scale never seen before 2001: for the past 17 years corporate profits have averaged a higher percentage (about 40% higher) of GDP than they ever saw in prior years. That translates into a roughly 40% increase in profits when measured against GDP . 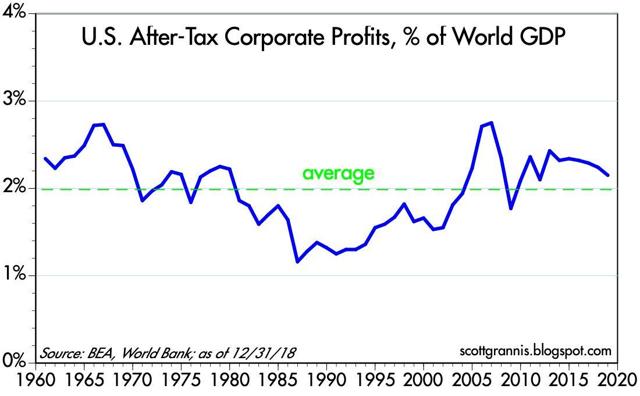 I theorized over 6 years ago that, due to globalization, US corporations' ability to boost sales and profits had increased significantly, and this explained why we shouldn't expect to see a reversion to the old profits/GDP mean. In a rapidly-globalizing world, expanding foreign markets allowed US corporations to significantly and permanently expand their sales. As Chart #3 shows, corporate profits have averaged about 2% of World GDP since 1960, with some signs of mean reversion around that mean. In other words, while corporate profits are running strong relative to our economy, they are simply keeping pace with the much-faster growth of the world economy. 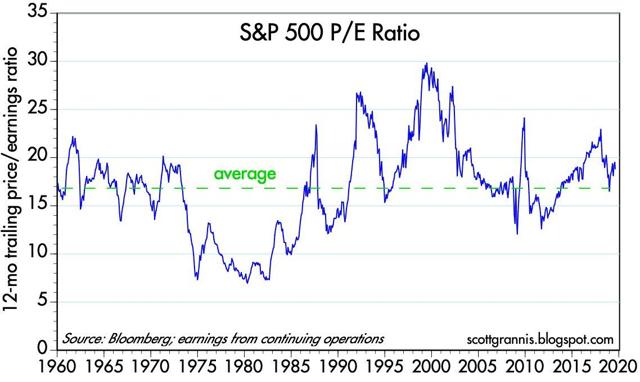 When profits surged to over 10% of GDP in the early years of the current expansion, most observers expected them to revert again, which is why PE ratios were depressed despite spectacular growth in profits (see Chart #4 and this post for more details). Today PE ratios are about 15% above their long-term average, but then again, profits continue to be a much larger percentage of GDP than they have been over the long term. I don't see any cause for concern over current PE ratios. 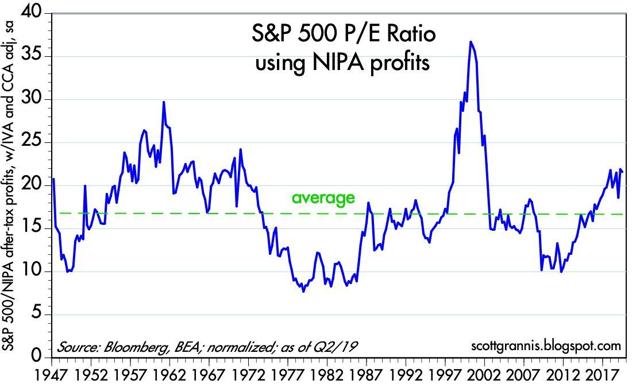 A few years ago, in a post entitled "A better PE ratio," I discussed an alternative way to measure PE ratios using the S&P 500 index (a good proxy for total market capitalization) and dividing it by NIPA profits (arguably the best measure of total corporate profits). I've done that in Chart #5. Note that the ratio is normalized so that its long-term average is equal to the long-term average of the standard measure of PE ratios (just under 17), which divide stock prices by trailing 12-mo. earnings per share (EPS). Both PE ratios today are running about 15% above average. 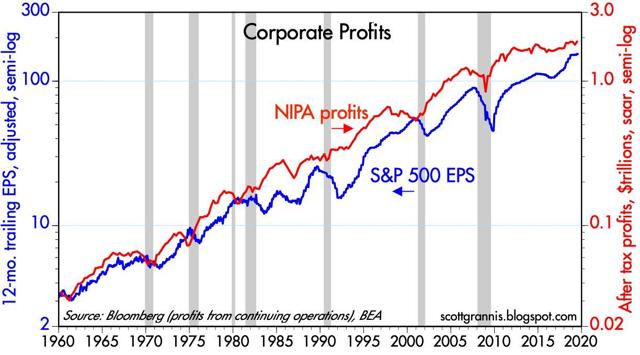 Chart #6 shows both measures of profits, again by using two y-axes with similar ratios and a semi-log scale. Note that the "gap" between NIPA profits and EPS profits has closed rather dramatically in recent years. Much of that came about thanks to a downward revision to past years' NIPA profits announced earlier this year.

In any event, both measures of profits seem now to be tracking each other more closely, and both give rise to similar PE ratios. Neither measure suggests that equity valuations are excessive. PE ratios are above their long-term average, but profits are in general much more abundant, relative to GDP, than they have been over the long haul. What's not to like about this?

Calafia Beach Pundit
55.3K Followers
Scott Grannis was Chief Economist from 1989 to 2007 at Western Asset Management Company, a Pasadena-based manager of fixed-income funds for institutional investors around the globe. He was a member of Western's Investment Strategy Committee, was responsible for developing the firm's domestic and international outlook, and provided consultation and advice on investment and asset allocation strategies to CFOs, Treasurers, and pension fund managers. He specialized in analysis of Federal Reserve policy and interest rate forecasting, and spearheaded the firm's research into Treasury Inflation Protected Securities (TIPS). Prior to joining Western Asset, he was Senior Economist at the Claremont Economics Institute, an economic forecasting and consulting service headed by John Rutledge, from 1980 to 1986. From 1986 to 1989, he was Principal at Leland O'Brien Rubinstein Associates, a financial services firm that specialized in sophisticated hedging strategies for institutional investors. Visit his blog: Calafia Beach Pundit (http://scottgrannis.blogspot.com/)
Follow
20 Comments
To ensure this doesn’t happen in the future, please enable Javascript and cookies in your browser.
Is this happening to you frequently? Please report it on our feedback forum.
If you have an ad-blocker enabled you may be blocked from proceeding. Please disable your ad-blocker and refresh.