Midstream broke out of its 6-week slump this week, helped by a private equity bid lobbed in Tuesday night, but also helped by risk-on broad market action and rebounding commodity prices. 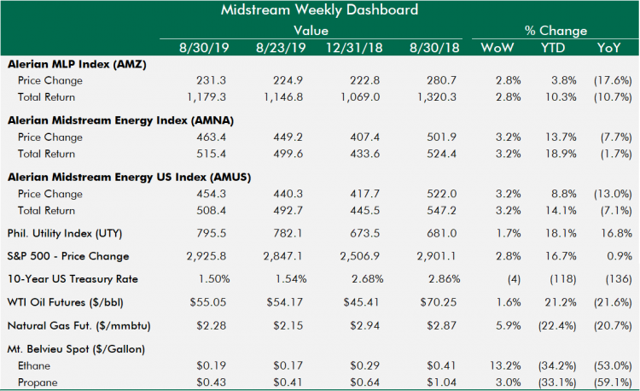 Even with a 30% gain from a 3.5% weight in the AMZ, the AMNA with less than 1% weight in that same name, outperformed this week, on broad-based gains across midstream corporations and Canadian midstream stocks.

Oil prices rallied this week on a very strong weekly inventory report. Natural gas and NGL prices were notably positive as well. Ethane prices rose 13% this week to cap a furious 117% rally off its multi-decade low price at the end of July. Still a long way to go to get back to Fall 2018 levels, but a much-needed improvement and a sign that the glut of ethane along the Gulf Coast is working its way down.

IEnova and TRP reacted positively to the news of Mexico agreement that seemed to skew favorably to pipeline operators rather than government. There was also some movement on MVP and Constitution projects from FERC. When adding in positive outcome for Keystone XL earlier this month, it feels like there's been a modest break in the regulatory clouds recently. Going into an election year, I'd be surprised if that break lasts very long before fresh environmental opposition emerges.

On Tuesday night, TGE caught a bid from its new general partner, Blackstone (BX) . A lot has been said about this news in the media (see Bloomberg articles here and here), and across Twitter. But I'll touch on a few thoughts here. 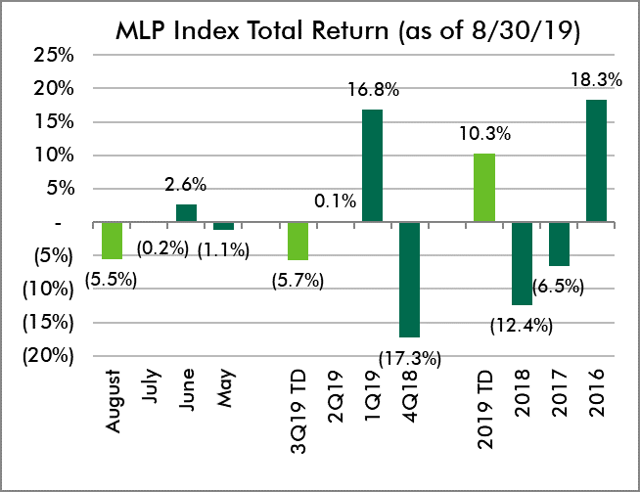 Broader midstream held up far better than the MLP Index in August and so far this quarter is down 4.0%, also much better than MLPs by themselves. This is due to strong returns in Canada and for a few of the large-cap midstream names. 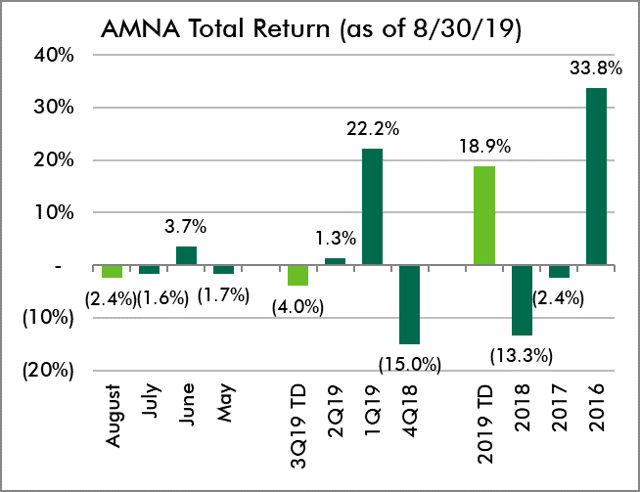 NGL's buyback announcement Friday added to already strong stock action this week to lead all MLPs. SMLP traded up after the TGE bid as an MLP with a private equity sponsor and a very low stock price, earning it a reprieve after a terrible week last week. MMLP did not get the treatment of other midstream stocks with private equity involvement, underperforming the group. 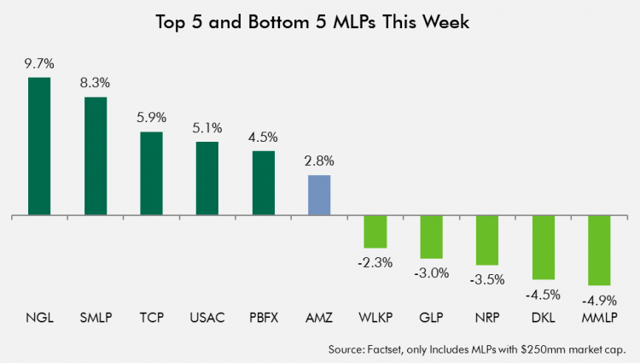 MMLP repeated in the bottom 5, while SMLP went from bottom to top 5. On the YTD leaderboard, NGL retook the lead and USAC climbed a few spots. Also notable, CEQP rejoined the top 5, replacing TGP. MMLP and SMLP are still far and away the worst-performing MLPs. 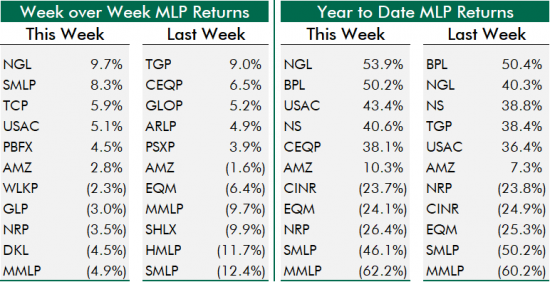 TGE went from free-falling in recent weeks to oscillating around its current bid price, finishing +30% on the week and still down 13.7% for the year. TRGP and ENLC bounced hard after the TGE news in what may have been possible readthroughs into other beaten-down stocks with private equity relationships. AM was the only negative stock in the group, trading down early in the week after a credit downgrade by S&P from BB+ to BB with negative outlook. 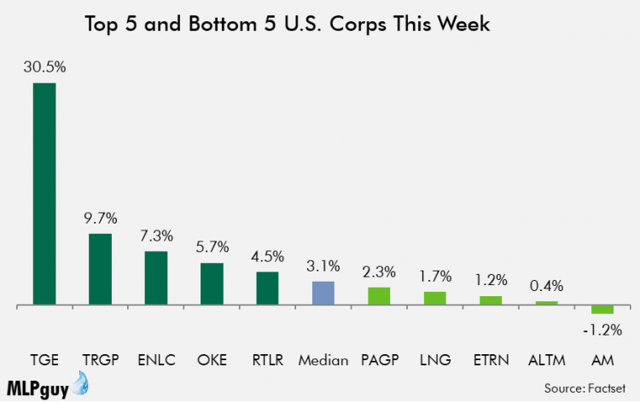 OKE and TRGP repeated in the top 5 week-over-week. ALTM and AM were the only repeats in the bottom 5. On the YTD leaderboard, OKE overtook KMI as the overall leader in returns this year at 37%. WMB returned to double digit YTD returns, and TRGP returned to positive YTD returns and to the top 5. 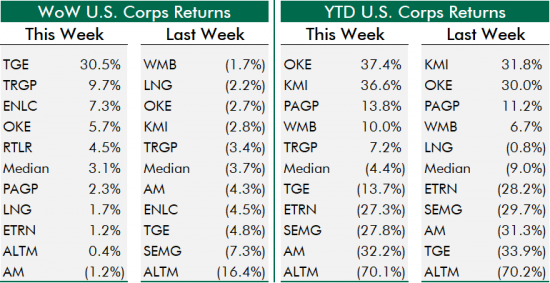 TC Energy (TRP) was far and away the best performer this week and extended its YTD lead on the group on now news. Enbridge was second place and Pembina was third in a week led by large cap names. It was a bit odd that in a week when a U.S. name made waves with a buyout bid that Inter Pipeline, rumored to be the target of a takeout bid in recent weeks, was the worst-performing stock in the group. 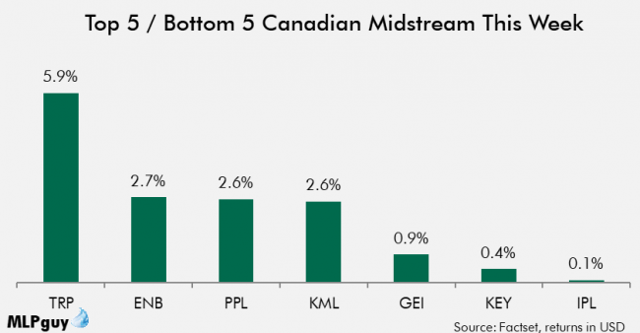 ENB and PPL went from bottom to close to the top week over week. On the YTD leaderboard, no changes to the order of the list, and all of the stocks have done pretty well.

TRP may have traded well this week on positive outcome from negotiations with the Mexican government related to certain pipeline contracts, but unlike the Mexican midstream company IEnova, TRP didn't seem to trade down when that contract uncertainty in the months ahead of this positive outcome.