The following charts do a good job of illustrating this. The first chart (corporate profits after tax divided by GDP) shows a rough V-shape, with the nadir occurring around 1986. 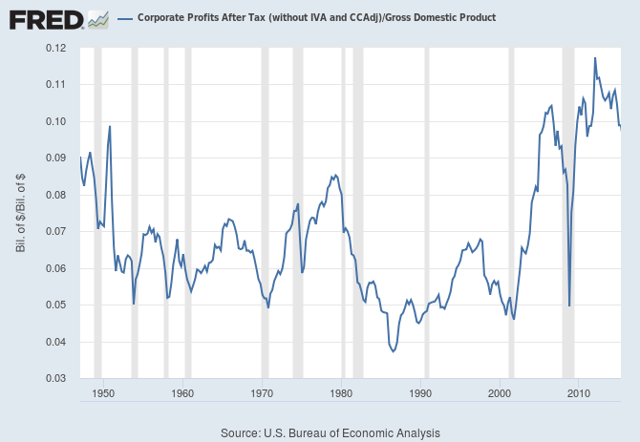 In the second chart, we see an upside-down V-shape, reaching its zenith around 1984. 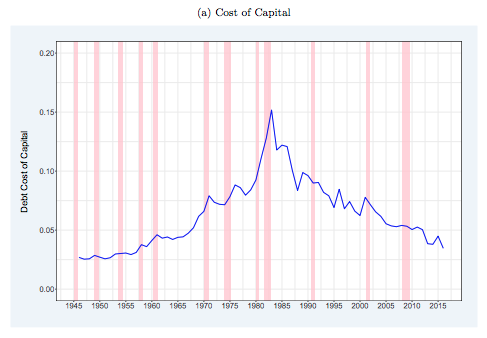 Compare these charts to one more chart, one that should come as no surprise considering the previous chart - the 10-year Treasury yield:

Corporate debt was priced higher following Treasuries during this time, which is what led to the spike in cost of capital. As with many economic shocks, it took time for interest rate changes to ripple through the economy, first pulling up corporate debt yields, and then weighing on profitability as businesses were unable to raise prices fast enough to compensate for increased financing costs.

Now that interest rates have plummeted back down to the ultra-low level enjoyed in the wake of World War II, business profitability has rocketed back up, above even the late 1940s and early 1950s. But not all businesses benefit equally.

What affects the amount of goods or services that are produced? There are basically three factors: capital, labor, and know-how. These are sometimes called the "factors of production." Without capital, even laborers with the know-how to create products will be unable to realize that creation process. Without labor, capital sits idle. And without technical knowledge or intellectual property, laborers using the existing stock of capital cannot increase their production capacity.

So what happens when money is printed or digitally created in order to stimulate the economy? In theory, this extra injection of cash increases liquidity and greases the gears of the economy, spurring increased production and consumption. But do all market actors benefit from this stimulus the same? At the same time?

No, they do not. It's an oft-repeated (and more or less accurate) truism that inflation is a monetary phenomenon. When the money supply grows faster than market demand for dollars (or interest rates fall lower than market forces of supply and demand would dictate), inflation follows. But when monetary stimulus is effected, prices do not immediately reflect it. Rather, the first recipients of this monetary stimulus benefit more than others, as they have the ability to spend newly created dollars before prices rise to reflect the increase in the money supply.

As the newly created money filters through the economy, prices slowly begin to reflect the reality of an enlarged money stock. Those who are last to receive this new money or take out a loan are worse off, as prices have already risen to reflect the expanded supply of dollars. Those who are worst off are those who personally receive no benefit from the newly created money but still have to pay the higher prices.

(If you ask me, I'd call this a form of redistribution — from the poor to the rich.)

This phenomenon is called the "Cantillon Effect," named after 18th century Irish-French economist Richard Cantillon. It describes this uneven dispersion of new money in the economy. There may be increased production or consumption as a result of monetary stimulus, but only for some at the expense of others.

Increasing the money supply does not increase the supply of capital, labor, or know-how. At best, it increases the financial strength and flexibility of those market actors who are closest to the money spigots while harming those who are furthest from them.

It is a monetary trickle-down effect, and it works about as well as opponents of "trickle-down" economics say that theory works. 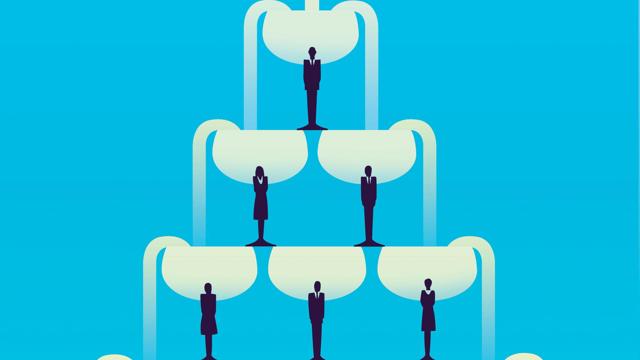 A Real-World Example Of The Cantillon Effect

It turns out that lowering interest rates does not affect all businesses equally. Larger companies which have stronger balance sheets and command significant market share benefit more than smaller, newer entrants into the field.

Simcha Barkai of the London Business School finds that:

declines in the interest rate lead to significantly larger gains for dominant firms (defined as the top 5 percent in an industry, with alternative definitions for robustness).

But this has lessened total competitiveness in many industries, as the largest players are able to maximize their size and financial strength as an advantage against smaller, financially weaker competitors. Thus, fewer industries are "contestable" — feasibly open to new competitors entering to claim market share. Barkai writes:

A low interest rate results in low growth because it reduces the fraction of industries that (in steady state) are contestable.

In other words, low interest rates, all else being equal, reduce the total competitiveness of the economy.

As I wrote in the previous article:

With low interest rates, market-leading firms are less incentivized to invest in longterm and risky R&D than they are to go about other methods of maintaining market share such as acquiring smaller, innovative companies, lobbying the government, and buying back corporate shares. But for industry leaders who are typically larger and more stable, the ability to borrow cheaply is disproportionately beneficial.

Lower interest rates benefit market leaders regardless how they use their cost of capital advantage — as long as it results in maintaining their market position.

One recent study corroborates this line of reasoning, concluding that the US business sector has indeed under-invested (in terms of R&D) since 2000 and cited declining competition (due to market competition) as one of the primary culprits.

The existing literature in growth either assumes no supply-side response to declining interest rates, or a positive response driven by an increased incentive to invest in the face of a higher discounted present value of future profits.

But this isn't the case, they say:

Thus, they conclude, "the effect of lower interest rates on growth in a low interest rate regime can be negative."

This rationale goes a long way in explaining the "secular stagnation" that developed countries have experienced in recent decades. This phenomenon is often blamed on demographics, the Great Recession, insufficient fiscal or monetary stimulus, etc. All of these traditional explanations are looking in the wrong direction. They want to see anything but the obvious: the Cantillon Effect is real, and it has been working exactly as envisioned.

This paper introduces the possibility of low interest rates as the common global “factor” that drives the slowdown in productivity growth. . . A reduction in long term interest rates increases market concentration and market power in the model. A fall in the interest rate also makes industry leadership and monopoly power more persistent.

"In short," says a Chicago Booth School article summarizing the paper, "as interest rates fell, rich companies got richer, and the smaller companies got stuck, or worse."

Going forward, with tens of trillions of dollars' worth of global debt already in negative territory and US rates falling, it does not appear as though the current situation is going to reverse anytime soon.

This may not be good for economic growth as a whole, but it may have implications for which kinds of stocks will outperform others over long time periods. Higher quality companies or those with wider economic "moats" (competitive advantages over rivals) will likely remain in dominant positions.

Take a look, then, at ETFs that seek to collect industry leaders with competitive advantages in one basket:

Notice that international stocks that supposedly wield competitive advantages (purple line above) have performed much more poorly than quality US stocks. It appears that international investors place more trust in US stocks than in the stocks of their home countries, at least in relation to American investors.

The three top-performing ETFs above have each outperformed (albeit slightly) the S&P 500 (SPY) during the current bull market.

Considering the current interest rate situation and the likelihood of additional monetary stimulus to come, these ETFs seem like good candidates for continued outperformance in the future.