Comparing the growth and profitability of online platform businesses can give insights into the attractiveness of each business model and its prospects. Based on an assessment of growth and profitability, I believe social media platforms are a more attractive business model than entertainment platforms, which are more attractive than ride sharing platforms. Netflix (NFLX), Twitter (TWTR) and Uber (UBER) appear overvalued while Spotify (SPOT) and Facebook (FB) appear undervalued.

User growth on platforms like Facebook, Netflix and Uber can be modelled using a Gompertz function. The Gompertz function is an s-shaped curve which has been used to model phenomena like the spread of a virus through a population. This approach generally yields a close match with past growth behavior, but estimates of future growth are highly uncertain as growth can be erratic and it is unknown at what level user numbers will plateau. The Gompertz function is still a useful framework though, as it can give insight into likely growth behavior and allows comparison across platforms. 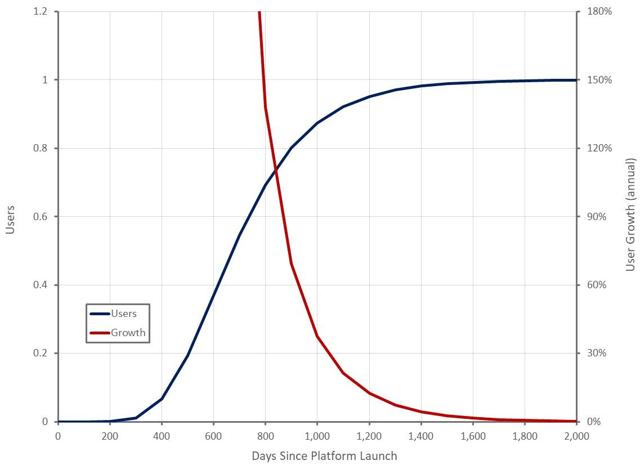 Social networks have exhibited faster growth and an ability to reach more consumers than other types of platforms. This is probably due to the service being free and the presence of network effects leading to rapidly increasing value for users as the platform's user numbers grow.

Paid services like Netflix, Uber and Spotify have exhibited lower growth but user numbers have still not begun to plateau, and it is unknown how large these platforms can grow to be. Although some of these platforms are promoted as having network effects, the relatively low user growth and smaller reach in comparison to social media platforms indicate that any network or scale related effects are weak.

The ratio of market capitalization to the estimated total number of users varies significantly across the companies assessed here, but is similar for companies with the same business model. Paid services generally have a higher market capitalization to total users ratio as they are likely to generate more revenue per user than advertising based business models. Uber and Lyft (LYFT) appear highly valued considering they are likely to have low profit margins, if they ever achieve profitability. The estimated number of total users is most uncertain for Spotify, Netflix, Uber and Lyft as these platforms are still growing at relatively high rates and it is not clear at what level user numbers will plateau. 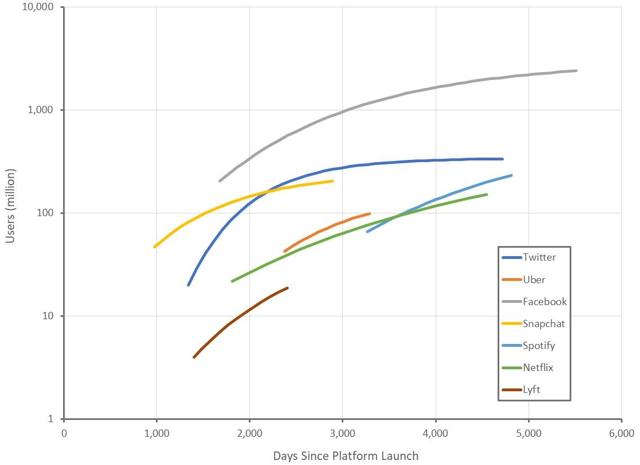 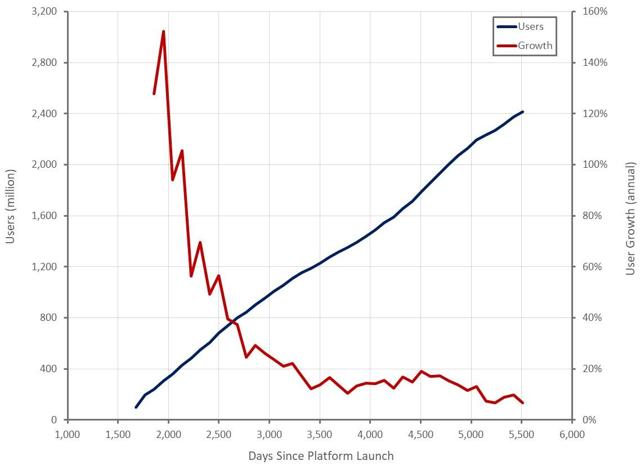 Facebook’s core platform is relatively low cost to operate and reaches a huge audience, which allowed Facebook to earn healthy profits early in the company’s history. Facebook has been able to scale revenue per user significantly over time indicating they are still in the process of fully monetizing the platform. Surprisingly, despite user growth and revenue per user growth, Facebook has been unable to expand their profit margins over time. 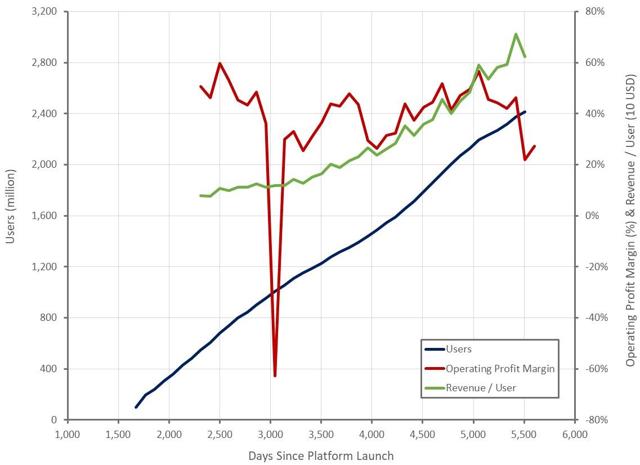 Spotify continues to exhibit strong growth in user numbers, indicating that their platform will continue to expand for some time. Based on current information I estimate a total user number of approximately 700 million, although this is highly uncertain as growth has yet to begin to taper. 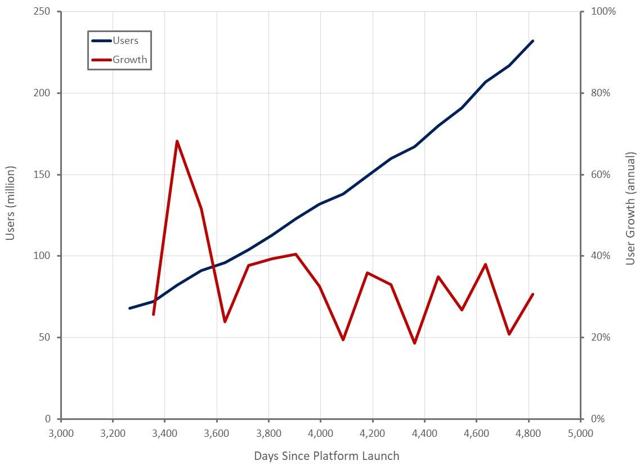 Spotify’s revenue per user is quite low given that they offer a subscription service in addition to an advertising based service. Revenue per user is expanding slowly though, likely as more users move to the premium option. There is still great potential for Spotify to increase revenue through higher subscription fees, more effective advertising and by gaining a higher percentage of premium subscribers. Spotify’s operating profit margin is also expanding slowly and is now approximately at breakeven. Although Spotify has little operating leverage, as they do not own content, they have the potential to increase margins through higher revenue per user and by reducing royalty expenses through original content like podcasts. 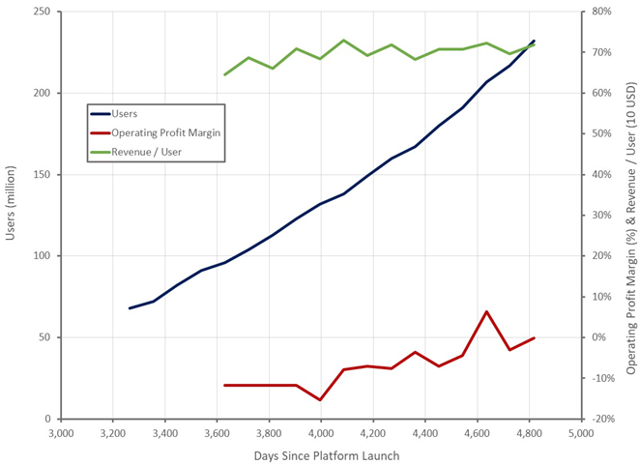 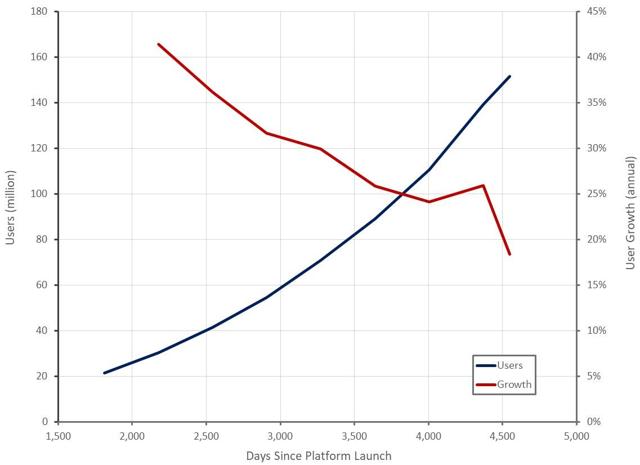 Netflix went through a period of declining revenue per user as the result of faster growth in international subscribers who pay lower fees, but this trend has reversed as a result of Netflix increasing international and domestic subscription fees. Netflix also experienced a period of declining profitability as it transitioned towards creating original content, but this trend has reversed as Netflix has grown users and subscription fees faster than costs. 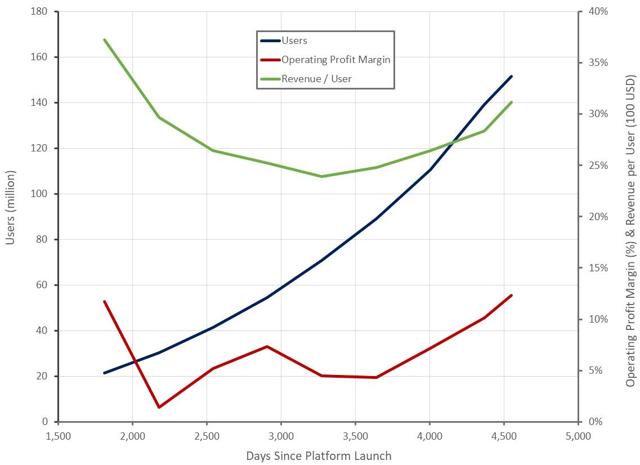 Uber’s user growth is somewhat erratic and has slowed dramatically in the last few years. It is not clear how much growth Uber can achieve going forward, but I believe their user numbers are likely to plateau at a far lower level than most other platforms assessed here. This is because ride sharing is a more fragmented market globally and competition is fierce, leading to lower market shares. In addition, ride sharing is a more niche service than social networking and entertainment which are fairly ubiquitous. 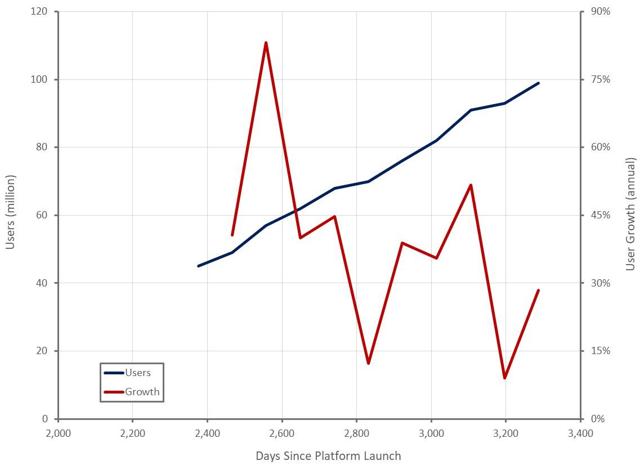 Despite reaching a large user base Uber is yet to achieve profitability, which is not surprising due to the problems inherent in the ride sharing business model. Also concerning is the fact that revenue per user has not been increasing over time, despite Uber introducing new services to the platform like Uber Eats. 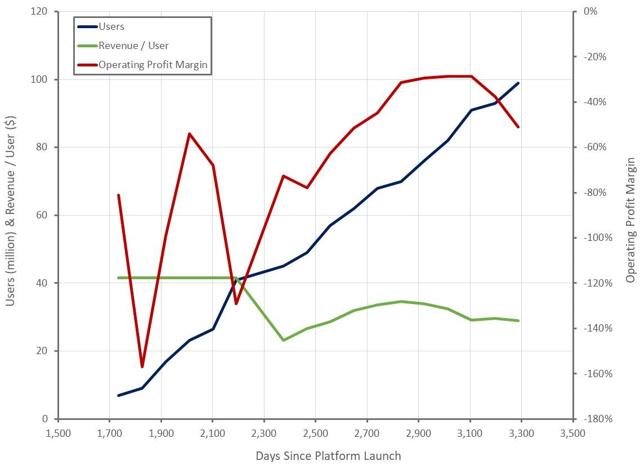 Platforms should be expected to lose a large amount of money initially for a number of reasons:

Once the platform reaches maturity though and growth begins to slow the platform should have achieved profitability or be on a clear path to profitability, otherwise the underlying economics of the business model need to be questioned.

For the companies assessed here most of the improvement in operating margin occurs at a quarterly revenue below $2 billion. This shows just how large Uber’s problems are, as it has quarterly revenue of over $2.5 billion and still has operating profit margins below -30%. Uber is unlikely to achieve significant margin improvements going forward and will take a long time to achieve profitability, if it ever does. Spotify and Netflix both appear to be on a path to achieving a modest level of profitability, although I believe Spotify has a greater opportunity to improve margins than Netflix. 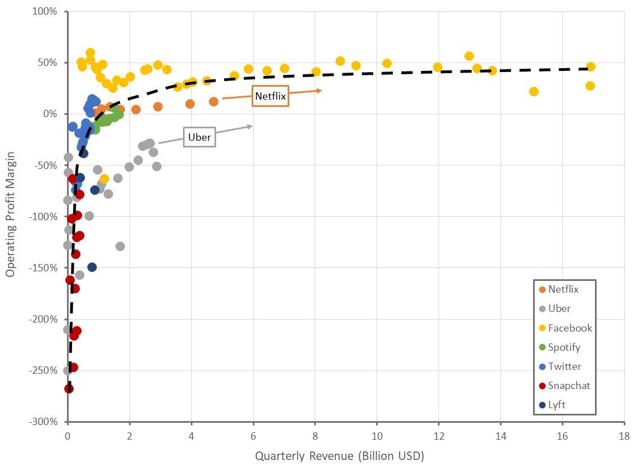 I believe Snapchat’s prospects are brighter than Uber and Lyft though as it is still in the process of scaling the business and figuring out how to effectively monetize its user base. As Snapchat’s revenue grows it is achieving significant improvements in gross profit margins, although bottom-line performance remains poor as a result of high research and development, sales and marketing and general and administrative expenses (~50%, ~30% and ~40% of sales respectively). I believe Snapchat’s gross profit margin will continue to expand significantly as sales grow and other overhead costs are likely to moderate as growth slows, which should move Snapchat toward profitability. 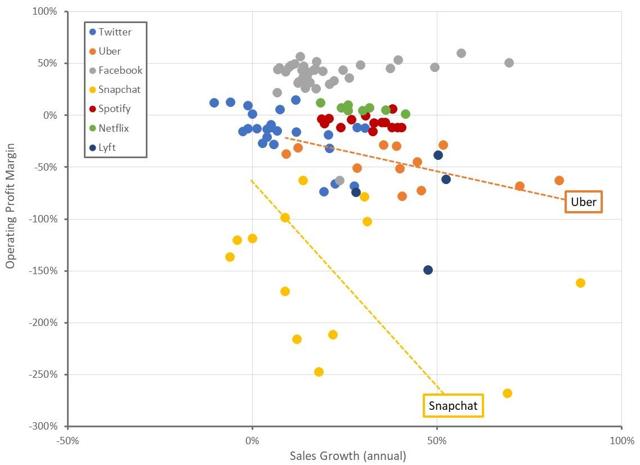 Based on estimates of future profit margins and market P/S ratios, I have estimated the fair value of social media, entertainment and ride sharing platforms. I believe Uber and Lyft are overvalued as investors are too focused on growth and are neglecting profitability. I believe Spotify is undervalued relative to Netflix as it has more potential to increase revenue per user and profit margins. I believe Twitter and Snapchat are overvalued relative to Facebook as they are unlikely to achieve the same level of profitability and in the case of Twitter, likely has little potential for further revenue growth. 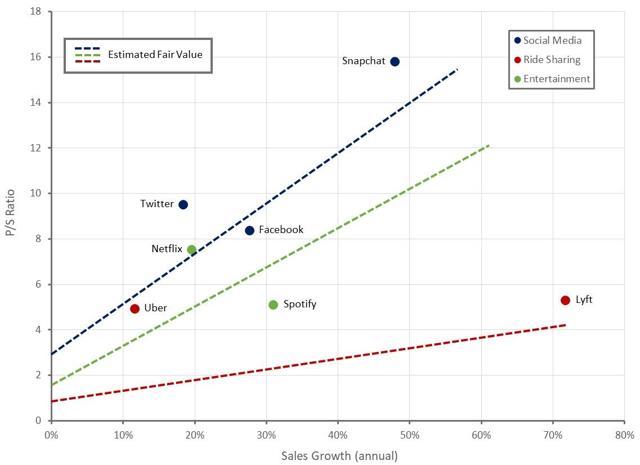 Not all platform business models are created equal, as shown by the financial performance of the companies assessed here. Investors should avoid overpaying for high growth companies if those companies are not on a path to profitability, particularly if growth is beginning to decline.

Richard Durant
3.92K Followers
I have been managing my own investment portfolio for the past 9 years with a focus on fundamental research and deep value investing over long time horizons. My primary interest is finding early stage innovations which will create long-term value. I have a Bachelors degree in finance, an MBA and have completed the CFA and CMT exams.richarddurant.substack.com
Follow

Disclosure: I am/we are long SPOT. I wrote this article myself, and it expresses my own opinions. I am not receiving compensation for it (other than from Seeking Alpha). I have no business relationship with any company whose stock is mentioned in this article.