Recro Pharma (REPH) investors should be pleased with the company's performance since the IV meloxicam CRL. Recro's efforts to cut OpEx and grow their CDMO segment took the share price from a 52-week low in March to a 52-week high a couple of weeks ago.

The success of Recro's CDMO segment should provide investors some confidence that Recro will hit their objective of cash flow positive in the second half of 2019. In the Acute Care segment, the company remains confident that IV meloxicam still has substantial potential for moderate to severe pain in various acute conditions. The company is still dedicated to getting an FDA approval for IV meloxicam and plans to meet with the FDA in order to find a path forward to approval.

This potential spin-out will be a major event for the company and investors. I will review both segments to provide investors with some vital information ahead of the potential spin-out. In addition, I reveal why REPH is a buy and what my plans are for REPH as we finish-out 2019.

The company's CDMO segment continues to beat expectations by generating $31.3M in revenue during Q2, which was a 44% increase over Q2 of 2018. Since the beginning of 2019, the CDMO segment has recorded about $56.3M in revenues and should continue to record year-over-year growth. Recro's CDMO is so strong due to some notable clients contracting Recro for some big-name products. These clients include Novartis (NVS) and Teva (TEVA), with Ritalin being one of the most recognized ADHD treatments in the United States (Figure 1).

As a result of the continued growth from their current customers and new business predictions, the company is increasing their full-year CDMO revenue guidance from $85-87M to $91-94M.

Is there room to grow? According to the management, the Gainesville plant is running at "approximately 66% to 70% utilization on one shift. That facility has traditionally run two full-time shifts, so there's quite a bit of additional capacity available for growth of a new business." So, it appears that the CDMO segment has plenty of room to grow if needed.

Back in March, the company received their second CRL from the FDA regarding their IV meloxicam, "a non-opioid preferential COX-2 inhibitor for the management of moderate to severe pain." 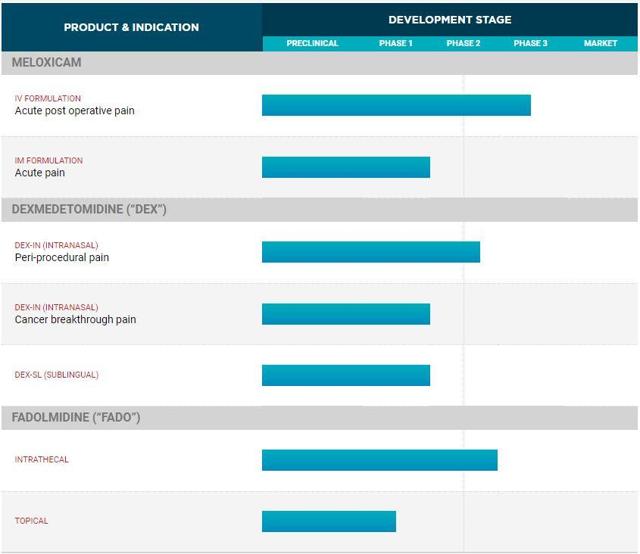 The second CRL cited concerns about the onset and duration of IV meloxicam stating FDA's opinion the tardy onset would fail to meet the physician's expectations for an IV pain drug. In addition, the CRL mentioned the FDA's apprehensions about the ability of IV meloxicam to be an effective monotherapy in acute pain. When reading those specific issues, I get the feeling that the FDA's view of the data shows that they are not impressed with the product's ability to do its job in the acute care as a monotherapy. So, I am concerned the company will have to go another route with IV meloxicam, which might require another trial.

Subsequent to the second CRL, the company cut OpEx in the Acute Care segment by eliminating 50 positions. As a result, the company believes this resourcefulness will meaningfully decrease cash burn, and the company expects to be cash flow positive in the second half of 2019.

The proposed spin-out could be a positive solution for both shareholders and the management. This way, the progress made by the CDMO segment should have a positive reaction in the share price. As for the Acute Care segment, the newly formed spin-out will able to focus on moving the pipeline forward to approval.

What about current REPH investors? Typically, when a company performs a spin-out, the investors of the original company will receive equal stock in the spin-out. I have to assume that will be the likely scenario for REPH investors, however, the management has yet provided further details.

As for future investors, they will be deciding where they want to invest. On one hand, you have a growing CDMO company that is close to being cash flow positive. On the other hand, the Acute Care company that has a late-stage product candidate that is looking for an FDA approval.

When will the spin-out happen? According to the company's Q2 earnings report, management expects this "is something that would be happening in 2019." So, it appears this transformative event is happening sooner than later.

R&D expenses have dropped to $7.2M mainly due to restructuring and a decrease in manufacturing costs for IV meloxicam. As for SG&A, expenses dropped down to $10M which was as a result of the cuts in the commercial team following the CRL. These expenses added up to a $2.8M net loss, which was down from a $12.7M net loss in Q2 of last year.

At the end of Q2, Recro had cash, cash equivalents, and short-term investments of $32.4M. Considering the company only recorded a $2.8M in net loss, I would say that cash position looks extremely enticing at the moment.

Is REPH Still a Buy?

I believe Recro is one of the best opportunities in the small-cap biotech arena with the potential for the company to be cash flow positive in the coming months, plus, a potential spin-out by year-end. When looking at the revenues, the Street expects the company to record solid growth for at least the next four years (Figure 4). Although the revenue growth is not exponential, I would point out the attractive forward price-to-sales ratio of ~2-3x over the next several years. Considering the sector's average price-to-sales is about 5x, we can say REPH is undervalued at the moment.

This is especially true when considering the company is closing in on recording a positive EPS (Figure 5).

Of course, there are other metrics to use when determining if a company is a buy, sell, or hold, but I also find revenue growth to have a strong influence on small-cap biotech stocks. Therefore, I still find REPH to be strong buy at these levels.

So far, the decision to reduce its Acute Care segment operations and focus its efforts on the CDMO segment has been working well for the company. Recro has almost stopped the bleeding and ready to start putting some cash. The company's CDMO segment might transition to a cash flow positive state by the end of 2019, which could prevent further dilution owing to a restructured financing agreement with Athyrium.

As for the Acute Care segment, the spin-out could allow a separate management team to progress the pipeline and work on strategic alternatives for Meloxicam. If the company receives a positive response from the FDA concerning Meloxicam, we could several interested parties inquire about being a potential commercial partner. If all goes well, the Acute Care spin-out could be an enticing investment by itself.

What's my plan? I intend to add to my position in the coming days or weeks before the potential spin-out is complete. I am one of those investors who are interested in the growing CDMO business, but I wouldn't mind having a claim to the Acute Pipeline. Ultimately, I still plan for REPH to be one of my largest positions by the end of 2019. Recro is making all the right moves, in my opinion, and I anticipate the market finally recognizing its potential once the spin-out has occurred.

What is my price target? Using the biotech sector's current price-to-sales of 5x and the company's revenue guidance of $91M (low-end), I get a market value of $455M, which would equal roughly $20.00 per share.

Disclosure: I am/we are long TEVA. I wrote this article myself, and it expresses my own opinions. I am not receiving compensation for it (other than from Seeking Alpha). I have no business relationship with any company whose stock is mentioned in this article.